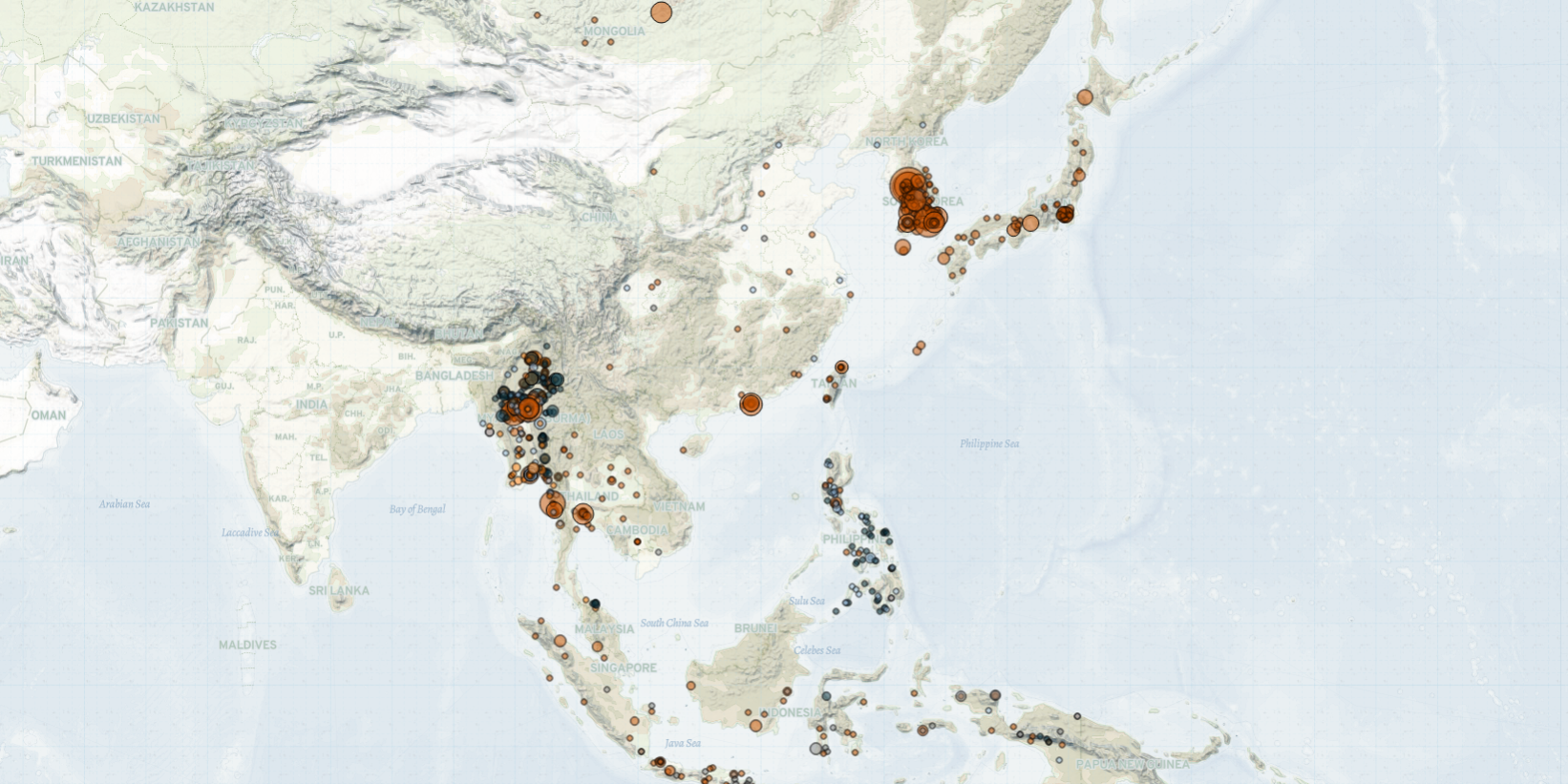 Last week in East and Southeast Asia, anti-coup supporters in Myanmar marked the 74th anniversary of the assassination of independence hero General Aung San by vowing to continue resistance against the military regime. Meanwhile, the regime has been accused of arresting volunteer doctors who had been treating COVID-19 patients privately. The Myanmar military continued to clash with ethnic armed organizations (EAOs) and other resistance groups across the country last week. In the Philippines, the government designated the National Democratic Front (NDF), the political wing of the Communist Party of the Philippines (CPP), as a “terrorist” organization, despite the NDF being party to peace talks with the government (Manila Bulletin, 19 July 2021). Lastly, demonstrations related to the COVID-19 pandemic were reported last week in Indonesia, Thailand, and Malaysia.

In Myanmar, anti-coup supporters protested on 19 July to mark the 74th anniversary of the assassination of key political figures that led Myanmar’s independence from the British, specifically General Aung San and other cabinet membersh (AP, 19 July 2021). Protesters chanted slogans and vowed to continue their resistance against the military regime. Separately, on 23 July, political prisoners staged a rare protest in Yangon’s Insein prison to demand the release of political prisoners, adequate medical treatment for prisoners, and a relaxation of regulations on items sent by family members. Local media reports that security forces launched a deadly crackdown in response to the protest, although exact details on the number of fatalities have yet to be confirmed (RFA, 23 July 2021).

Meanwhile, security forces arrested several volunteer doctors last week, who were providing treatment to COVID-19 patients, independent of the public health system (Irrawaddy, 20 July 2021). With the collapsing public health system overwhelmed by a surge in COVID-19 cases, COVID-19 patients have resorted to private solutions for purchasing oxygen, or treatment from volunteer doctors outside of public hospitals (Straits Times, 19 July 2021). Some doctors have claimed that these arrests may be an attempt to force the public to cooperate with the regime and to rely on regime healthcare services (Straits Times, 22 July 2021). The regime has also been accused by the former UN Special Rapporteur on Myanmar of “weaponizing COVID-19” to “gain the legitimacy and control it craves” (VOA, 16 July 2021).

Separately, clashes between the Myanmar military and EAOs were reported in Kachin, Kayah, Kayin, Mon, and Shan states last week. In Chin state, fighting broke out between the military and the Chinland Defense Force (CDF) in Mindat, a week after a bilateral temporary ceasefire expired on 14 July (Myanmar Now, 22 July 2021). In addition to fighting with EAOs, deadly clashes also occurred between the military and local People’s Defense Force groups in Sagaing region. People’s Defense Force groups are local defense groups that have begun to form in the aftermath of the February 2021 coup. (For more on trends in Myanmar since the coup, see this recent analysis piece.)

Last week, the Anti-Terrorism Council of the Philippines designated the NDF as a “terrorist” organization (Manila Bulletin, 19 July 2021). The NDF serves as the political wing of the CPP, whose armed wing, the New People’s Army (NPA), has been carrying out a decades-long communist armed struggle against the government. The designation is contentious because the NDF is the CPP representative in peace talks with the government. The government justified the designation, claiming that the NDF continues to recruit people to join the NPA (Manila Bulletin, 19 July 2021). Meanwhile, the NDF said that the “terrorist” designation is likely to lead to more government attacks against members and potentially sympathetic activists working in legal organizations (Philippine Daily Inquirer, 21 July 2021). The Anti-Terrorism Council is a body that was established through the highly controversial Anti-Terrorism Act of 2020. The legislation has been criticized for expanding the scope for warrantless arrests and the designation of persons as “terrorists” without proper due process (CNN, 30 January 2021). A ruling on 37 petitions challenging the act is pending in the Supreme Court (Philippine Star, 8 July 2021).

Also in Indonesia, as the number of COVID-19 deaths increases (CNN, 18 July 2021), more reports emerge of body-snatching of COVID-19 victims from hospitals and from health workers  (Kompas, 23 July 2021; Kompas, 13 July 2021). Since the beginning of the pandemic, some families, especially devout Muslims, have refused to bury COVID-19 victims according to emergency health protocols, which prevent the washing of the victims’ bodies and certain religious burial rituals (AP, 9 July 2020).

A spike in anti-government protests occurred in Thailand last week. Protesters coordinated a nationwide car rally against the administration of Prime Minister Prayut Chan-o-cha over the COVID-19 crisis. His failure to successfully manage the vaccination campaign has drawn criticism across the country’s historical pro- and anti-establishment divide, with mounting calls for his resignation from both sides (VOA, 20 July 2021).

In Malaysia, dozens of youths staged a protest in Kuala Lumpur to criticize the government’s handling of the COVID-19 pandemic (Free Malaysia Today; 17 July 2021). They demand the resignation of the prime minister and a full parliamentary session to take place. The Malaysian government suspended parliamentary activity in January 2021 after declaring a state of emergency in response to the spread of COVID-19 (CNA, 26 July 2021). Pressured by the country’s king, the prime minister has recently agreed to reconvene the parliament for five days to brief parliament on a COVID-19 action plan (Nikkei, 5 July 2021). The five-day session has been criticized by opposing lawmakers as it does not allow any debates or voting (The Diplomat, 27 July 2021). In recent months, the #Kerajaangagal (failed government) campaign has spread, adding pressure on the government to improve its COVID-19 response (CNA, 21 July 2021).