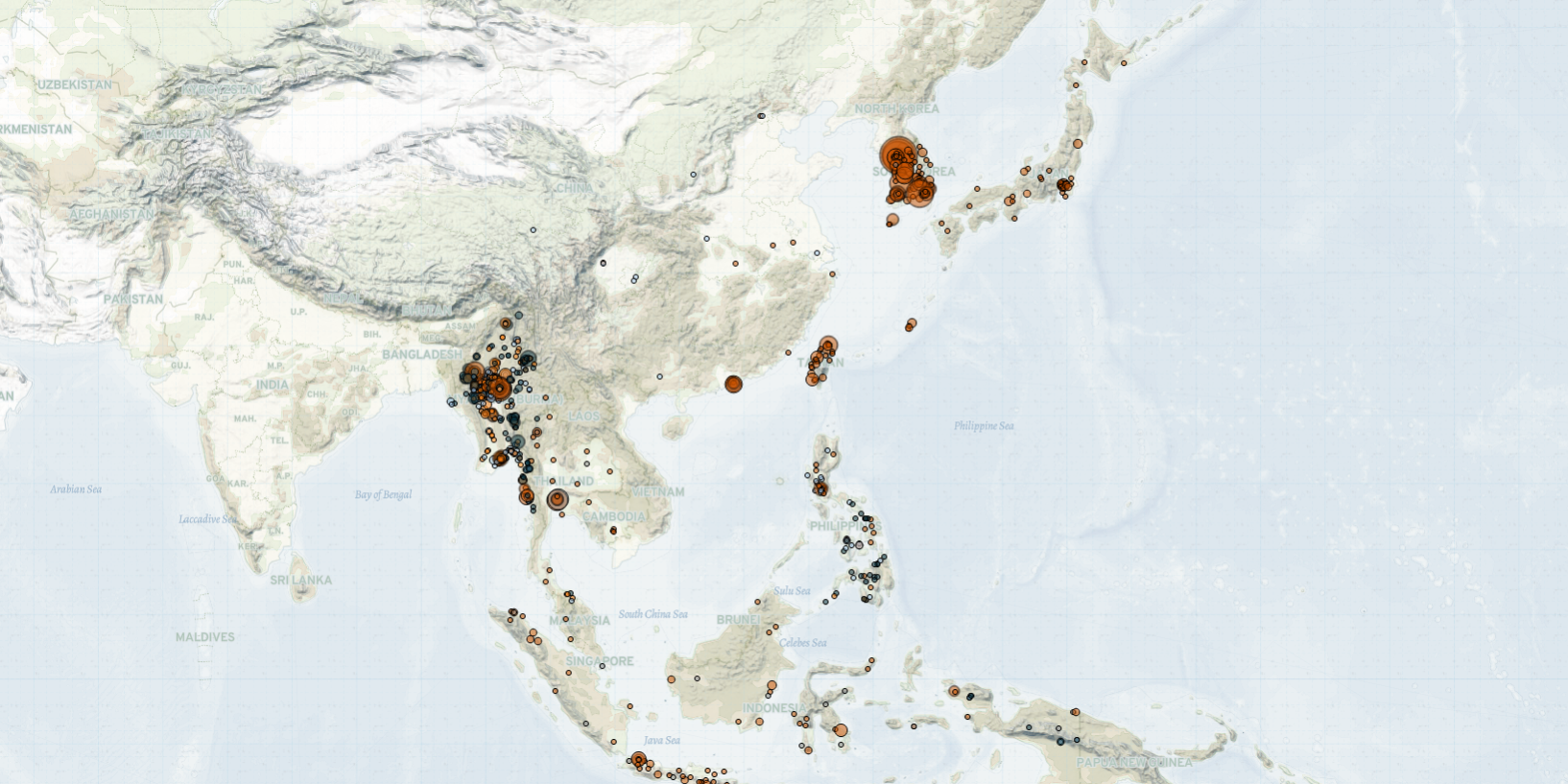 Last week in East and Southeast Asia, anti-coup protesters in Myanmar held rallies urging the UN to retain Myanmar’s incumbent permanent representative ahead of the opening of the UN General Assembly. Meanwhile, the military intensified its crackdown on suspected members of the People’s Defense Force (PDF) following the declaration of a “people’s defensive war” by the National Unity Government (NUG) on 7 September (Al Jazeera, 7 September 2021). Elsewhere, deadly clashes between the military and local defense groups were reported in Chin state and the Magway region. In Thailand, anti-government rioting continued despite a decrease in demonstration events. The International Criminal Court (ICC) officially authorized an investigation into alleged crimes against humanity related to the Philippine government’s ‘war on drugs.’ In Indonesia, clashes between state forces and the separatist West Papua National Liberation Army (TPNPB) continued. Meanwhile, both North and South Korea launched ballistic missile tests, including South Korea’s first test of an underwater-launched ballistic missile. The tests come amid a prolonged stalemate in nuclear talks between North Korea and the US.

In Myanmar, ahead of the opening of the UN General Assembly on 14 September, anti-coup protesters held rallies across Myanmar, urging the UN to recognize the NUG and to retain Kyaw Moe Tun as the Permanent Representative of Myanmar. The diplomatic battle to represent Myanmar at the UN took center stage last week as the NUG and the military junta submitted competing bids to take Myanmar’s seat (Al Jazeera, 13 September 2021). Reports citing diplomatic sources stated that the US and China had brokered an agreement to defer the decision on Myanmar’s representation until November 2021 (The Diplomat, 14 September 2021). Similar protests were held in Japan, where around 2,000 Burmese nationals marched in Tokyo to protest against the military coup in Myanmar and to express support for the NUG (NHK, 13 September 2021).

Meanwhile, there was a slight uptick in attacks against civilians by state forces last week compared to the week prior, as state forces stepped up their effort to hunt down civilians with alleged links to the PDF (Irrawaddy, 16 September 2021). This increase in attacks follows the NUG’s declaration of a “people’s defensive war” against the military during the week prior, on 7 September (Al Jazeera, 7 September 2021). Notably, over two-thirds of these attacks last week occurred in the resistance strongholds of Magway and Sagaing regions, which continue to witness some of the deadliest crackdowns on anti-regime resistance. The military regime also blocked internet services in several townships in the Mandalay and Sagaing regions, beginning 14 September (Irrawaddy, 15 September 2021).

Targeted attacks against military-linked individuals and military assets also continued last week, including at least two dozen attacks on telecommunications towers operated by MyTel, a joint venture partly owned by the Myanmar military. Only a few attacks have been claimed by local defense groups, which state that the towers were targeted to cut off the flow of income from MyTel to the military (RFA, 10 September 2021).

Separately, heavy fighting broke out between the military and the Chinland Defense Force (CDF) in Chin state. On 11 September, the military suffered fatalities when the CDF and the Chin National Front/Chin National Army (CNF/CNA) jointly attacked and seized a police outpost near Lungler village in Thantlang township. The entire village of 900 people reportedly fled across the border to India days before the offensive (Myanmar Now, 16 September 2021). In the neighboring Magway region, deadly clashes between local defense groups and the military continued in Gangaw district.

In Thailand, demonstration activity fell last week, with Thalugaz, a newly established student group using non-peaceful tactics, announcing a temporary halt in their anti-government demonstrations (Thairath, 13 September 2021). Despite Thalugaz’s announcement, youth anti-government demonstrators continued to engage in rioting and clashed with police. Meanwhile, the United Front for Democracy against Dictatorship (UDD) held a protest on 19 September to commemorate the 15th anniversary of the 2006 coup d’etat, in which the military overthrew the civilian-led government of Thaksin Shinawatra (Prachachat, 17 September 2021). Also, four anti-government protest leaders were released on bail last week, while two others remain in detention (Bangkok Post, 15 September 2021). As such, pro-democracy protesters are likely to continue calls for their release.

The ICC opened an investigation last week into crimes against humanity allegedly committed by state forces in the Philippines between 1 November 2011 and 16 March 2019 within the context of the government’s ‘war on drugs.’ The period spans not only Duterte’s presidency, which began on 30 June 2016, but also part of Duterte’s mayorship in Davao city, prior to his winning the presidency, where similar crimes allegedly occurred. Only crimes committed when the Philippines was party to the Rome Statute (1 November 2011 – 16 March 2019) are under the jurisdiction of the ICC (ICC, 15 September 2021). Although the government announced that it would not cooperate with the investigation (ABS-CBN, 16 September 2021), the ICC has the mandate to intervene when member states are unable or unwilling to prosecute such crimes (Al Jazeera, 15 September 2021). With his mandate coming to an end in May 2022, President Rodrigo Duterte has previously announced that he will run for vice president, which would shield him from possible prosecution (Rappler, 11 July 2021; Al Jazeera, 22 September 2021). Experts argue that having an ally as president would also ensure protection against legal cases when Duterte steps down (Rappler, 11 July 2021). Although Duterte’s daughter, Sara Duterte-Carpio, denies that she will run for the presidency, experts speculate that she might eventually announce her candidacy (Al Jazeera, 22 September 2021)

In Indonesia, armed clashes between the TPNPB and state forces took place across three days in a row in Papua and West Papua provinces last week. The clash in Kiwirok district, Pegunungan Bintang regency, resulted in one rebel being killed (Tribunnews, 17 September 2021). Notably, the TPNBP also attacked health workers in Kiwirok district. Rebels forced three nurses to take off their clothes and attacked them with sharp weapons, killing one nurse (Detik, 16 September 2021; Tribunnews, 17 September 2021). While the TPNPB has previously targeted public infrastructure to express their discontent with the central government’s control over the provinces, the targeting of government health workers has been rare so far.