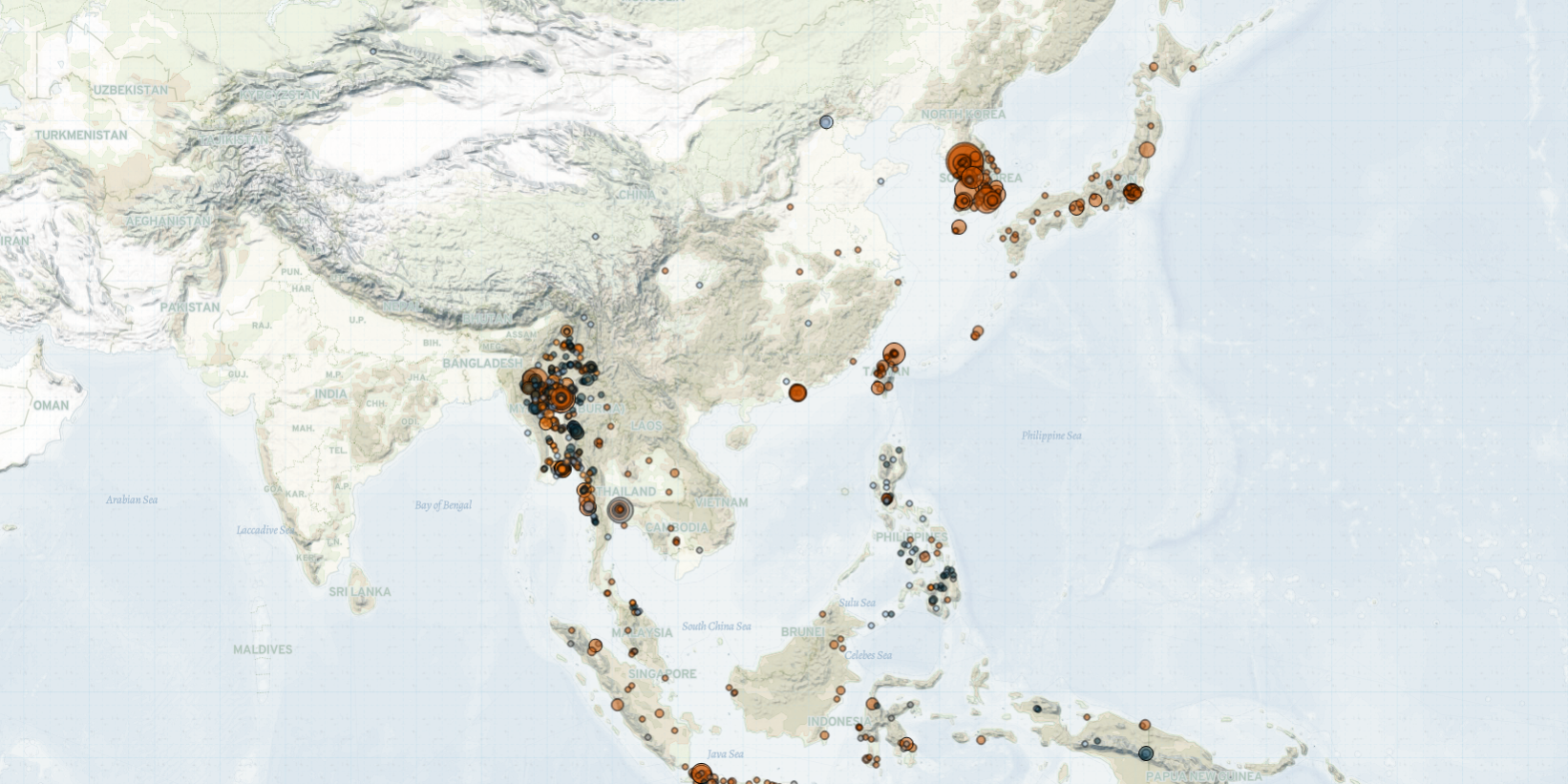 Last week in East and Southeast Asia, fierce fighting between the military and local defense forces was reported in Myanmar, in Sagaing region. In Thailand, there was an increase in separatist violence in the Deep South. In the Philippines, several attacks targeting politicians were reported ahead of the candidate nomination period for upcoming elections to be held on 9 May 2022. Meanwhile, President Rodrigo Duterte announced that he would not seek election as vice president next year. In Indonesia, fighting between state forces and the West Papua National Liberation Army (TPNPB) continued in Papua province. North Korea tested two newly developed missiles. In China, a pro-democracy organization from Hong Kong has decided to disband following a series of arrests of its leadership under the national security law. Lastly, there was an increase in the number of demonstration events in Mongolia, driven by demonstrations against the government’s response to the ongoing coronavirus pandemic.

In Myanmar, the anti-coup movement entered its eighth month as protesters continued to stage demonstrations against the military regime. On 25 and 26 September, anti-coup protests were held in Mandalay, Sagaing, and Yangon regions in commemoration of the 14th anniversary of the 2007 clergy-led Saffron Revolution, coined after the color of the robes worn by Buddhist monks in Myanmar. This year, in Mandalay city, dozens of monks marched on the streets, chanting slogans in support of the anti-coup movement (Mizzima, 26 September 2021).

Meanwhile, the military launched airstrikes over the weekend of 25 and 26 September in Pinlebu township, Sagaing region against its opponents. This comes after days of deadly clashes with local People’s Defense Force (PDF) groups where military forces reportedly suffered heavy casualties. The Kachin Independence Organization/Kachin Independence Army (KIO/KIA) was reportedly involved in a few of the clashes (RFA, 27 September 2021). Since the 1 February coup, the KIO/KIA has clashed more than a dozen times with the military in Sagaing region, including alongside local PDF groups, which was a region outside of its traditional areas of operations prior to the coup. Residents reported that telephone lines and internet were cut in the affected townships before the airstrikes. Heavy fighting between the military and the KIO/KIA was also reported over several days in Kachin state last week.

In Thailand, there was a spike in violence by Malay Muslim separatists last week. The deadliest attacks against Thai police in weeks were reported on 28 September, with at least three confirmed deaths. On 6 September, Barisan Revolusi Nasional (BRN), the largest armed insurgent group in the Thai Deep South, posted on Facebook to urge combatants to resume their fights for autonomy in the region (Benar News, 28 September 2021). Last year, the BRN unilaterally declared a ceasefire in April to allow humanitarian and medical access in response to the COVID-19 outbreak. There has been an increase in violence since the announcement last month.

Last week in the Philippines, multiple attacks targeting politicians were reported ahead of the 1-8 October candidate nomination period for the 2022 elections. In Cagayan de Oro City, unidentified assailants carried out an unsuccessful grenade attack on a lawmaker’s residence. Meanwhile, unidentified armed men killed an aide to a prospective vice mayoral candidate in Datu Saudi-Ampatuan. Elections in the Philippines have historically been marred by violence, with fierce political rivalry sometimes leading to the use of private militias to target or intimidate opponents (for more, see this ACLED analysis).

Additionally, in a surprise move, President Duterte announced that he will no longer pursue a vice presidential run (Bloomberg, 2 October 2021); Duterte’s presidential mandate is set to end in 2022. Duterte had previously admitted that his vice presidential run was aimed at securing him immunity against an International Criminal Court (ICC) investigation into crimes against humanity that had been allegedly committed in the context of his government’s war on drugs (Rappler, 17 July 2021). There is speculation that Duterte’s daughter, Sara Duterte, will run for president, which could allow her to provide immunity for her father, despite already having filed her candidacy for a third term as mayor in Davao City (ABS-CBN, 3 October 2021).

In Indonesia, TPNPB Papuan separatists and state forces continued to clash last week in Pegunungan Bintang regency, Papua province. One police officer and one rebel were killed. The TPNPB has increased its activity in Pegunungan Bintang regency in the past month following a rare attack on health workers on 13 September. Meanwhile, members of the pro-independence Papuan Students Alliance (AMP) demonstrated in front of the US Embassy and Consulate in Jakarta and Bali, respectively. They criticize the role of the US in facilitating the handover of Papua and West Papua provinces to the Indonesian government from the Dutch colonial administration in 1969.

Additionally, there was also an increase in the number of demonstration events opposing the dismissal of 57 members of the Corruption Eradication Commission (KPK). The KPK members were officially fired last week after failing to pass a civic service exam in May. There are speculations that the exam was used as a tool to weaken the commission that has a long track record for arresting corrupt politicians (The Jakarta Post, 30 September 2021).

North Korea conducted two missile tests last week, prompting an emergency meeting of the UN Security Council to discuss North Korea’s ongoing missile testing (The Guardian, 3 October 2021). On 28 September, North Korea test-fired a new hypersonic missile (BBC, 30 September 2021), followed by a new anti-aircraft missile two days later (The Guardian, 1 October 2021). The latest tests follow ballistic and cruise missile tests in mid-September, as well as reports that North Korea had restarted operations at the Yongbyon nuclear reactor in July (UN, 30 August 2021). The reactor is believed to have been previously used in the production of nuclear weapons (UN, 30 August 2021). Experts believe that North Korea is trying to find leverage in the nuclear talks, which have been stalled since 2019 (Al Jazeera, 1 October 2021).

In China, a prominent Hong Kong pro-democracy group, the Hong Kong Alliance in Support of Patriotic Democratic Movements of China, disbanded last week amid ongoing pressure from state authorities. The group faced accusations of acting as the agent of a foreign power, amid the arrest of three leaders on suspicion of “incitement to subvert state power,” and the freezing of the group’s assets (HKFP, 25 September 2021). The 32-year-old organization had previously attracted crowds of over 100,000 people to now-banned annual 4 June vigils and called for an end to one-party rule (RFA, 25 September 2021). In 2021, at least 49 pro-democracy civil society groups, labor unions, and media organizations have halted operations, and dozens of top democrats and activists have been arrested and charged under the Beijing-imposed national security law (The Stand News, 25 September 2021).

In Mongolia, the opposition Democratic Party (DP) organized a large-scale demonstration in Ulaanbaatar last week, demanding the resignation of the Mongolian People’s Party-led government over their response to the coronavirus pandemic. Members of the ‘NoNaadam’ movement, joined by families of coronavirus victims, also held a series of demonstrations in Ulaanbaatar under the slogan ‘NoDoubleStandard.’ Demonstrators claim that the government has implemented coronavirus restrictions on a prejudicial basis, limiting working hours only for certain businesses (Ikon.mn, 1 October 2021). Additionally, they argue that the government has failed to abide by its own coronavirus regulations. The movement gained support after organizing a series of demonstrations to criticize the government’s plan to hold celebrations of the national festival ‘Naadam’ in mid-July amid a spike in COVID-19 cases.