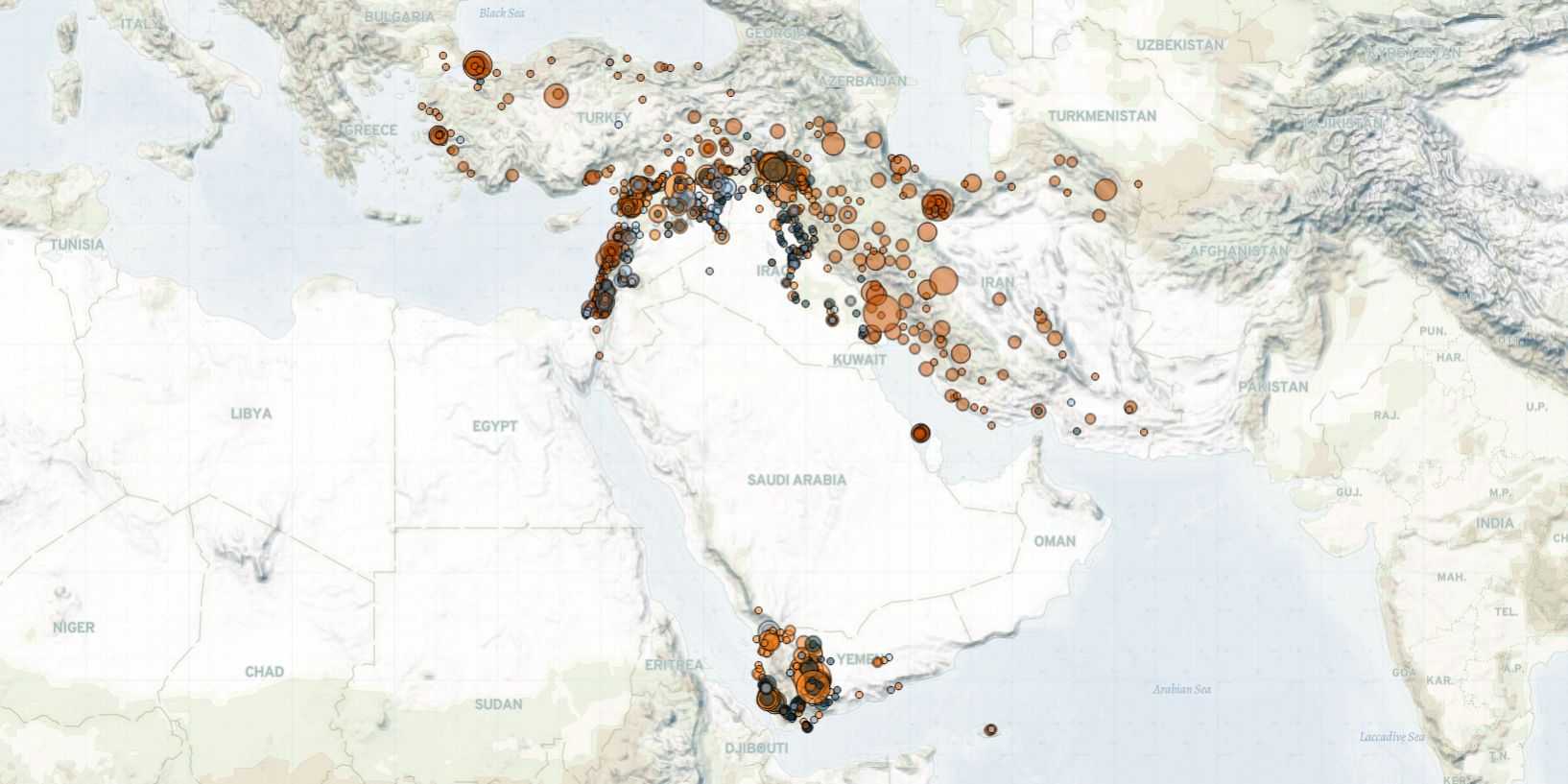 Last week in the Middle East, Houthi forces continued to make gains in the south of Marib governorate in Yemen and advanced into further areas of Shabwah governorate. In Syria, a People’s Protection Units (YPG) guided missile attack targeted a Turkish vehicle in Aleppo province, killing at least one soldier and wounding others. Meanwhile, Israeli airstrikes targeted regime and pro-Iran militia positions in Homs province. In Iraq, parliamentary elections were held on 10 October with a higher voter turnout than initially expected. In Lebanon, armed clashes erupted in Chiyah after snipers opened fire on a Hezbollah and Amal Movement-led protest calling for the removal of the judge assigned to the Beirut Port Blast case. Israeli settler attacks against Palestinian farmers increased in the West Bank, coinciding with the olive harvest season. Lastly, Israeli forces killed a Palestinian youth near Bethlehem after he hurled Molotov cocktails at a road connecting Israeli settlements.

In Yemen, fighting between Houthi and pro-Hadi forces escalated in the southern frontlines of Marib governorate. Political violence reached its highest level in the governorate last week since early March 2021. Houthi forces took over the administrative center of Al Abdiyah district, which they have been besieging for several weeks (Associated Press, 17 October 2021), after shelling its main health facility. In Al Jubah district, Houthi forces continued to make gains towards the main road leading to the district capital. Some observers suggest that these gains are the results of agreements between Houthi forces and tribal leaders to spare their territory from conflict (Twitter @tonytohcy, 12 October 2021). Meanwhile, the Saudi-led coalition also claims to have killed hundreds of Houthi fighters in airstrikes throughout last week (Al Jazeera, 17 October 2021).

In Shabwah governorate, Houthi forces advanced into Merkhah As Sufla district last week following the reported retreat of pro-Hadi forces. Given the Houthi capture of Ain and Bayhan districts in late September, which had been held by pro-Hadi forces since 2017, this represents a further blow to pro-Hadi forces in one of their few remaining strongholds.

In Syria, fatal attacks against Turkish forces continued last week in the northwest with two incidents recorded. In the Idleb countryside, an IED planted by the Islamist group Ansar Abu Bakr al Saddiq Brigade targeted a Turkish military convoy passing near Kafraya-Ma’arrat Tamasrin junction, killing two Turkish soldiers and injuring four others. Meanwhile, in northern Aleppo, an anti-tank guided missile attack carried out by the YPG targeted a Turkish vehicle near Mare,’ killing at least one Turkish soldier and wounding several others. In response to recent escalations in northern Aleppo, Turkish President Recep Tayyip Erdogan threatened to launch a fresh military operation against the YPG during a speech on 11 October (Al-Monitor, 15 October 2021).

In central Syria, Israeli warplanes launched airstrikes targeting regime forces and pro-Iran militia positions at Tiyas airbase and near Tadmor city in Homs province last week, resulting in at least 13 fatalities. Meanwhile, regime forces and Russian military police entered the city of Nasib in Dar’a, near the Jordanian border, as part of a series of Russian-brokered agreements reached between the Dar’a Central Committee and regime forces in southern Syria.

In Iraq, Islamic State (IS) and unknown militants conducted separate attacks on voting stations in Kirkuk, Diyala, and Ninewa provinces during the parliamentary election on 10 October, killing two security force personnel tasked to protect the voting stations. Iraqi security forces, the army, and Popular Mobilization Forces (PMF) had deployed units to secure electoral polling stations across the country in the week leading up to the election (Al Jazeera, 10 October 2021). Voter turnout in the parliamentary election was higher than the initially expected 20-30% turnout, with 43% of eligible voters voting (Al Jazeera, 10 October 2021). The Sadrist Movement received the highest share of the vote, resulting in over 70 seats in the 329-member parliament, while the Progress Party came in second with around 38 seats, according to preliminary results (Anadolu Agency, 17 October 2021). The pro-Iran Fatah Alliance only secured around 15 seats and has rejected the election results. Leaders of the PMF, the armed wing of the Fatah party, called the election a “scam” and said they will appeal the results (France 24, 18 October 2021). Disappointed Fatah Alliance supporters demand a recount of the vote in Karbala city on 13 October (Al Jazeera, 19 October 2021). A day later, Fatah Alliance supporters rioted in rejection of the electoral results in the Telafar and Bartella districts of Ninewa. Similarly, on 14 October, Iraqi forces dispersed a protest by supporters of the Victory Alliance who protested in the Al Khalis district of Diyala province. The Victory Alliance protesters also opposed the election results, which saw the Victory Alliance securing no seats in the new parliament (Al Jazeera, 10 October 2021). In light of these trends, Iraq is likely to enter a prolonged government-formation negotiation process in the coming months.

In Lebanon, Amal Movement and Hezbollah supporters clashed with unidentified gunmen in Chiyah last week. The clashes broke out after unidentified snipers opened fire on an Amal Movement and Hezbollah-led protest, in which demonstrators accused the presiding judge in the Beirut Port Blast case of bias, calling for his removal (Al Jazeera, 14 October 2021). Lebanese military forces intervened and clashed with both sides, arresting 19 individuals, two of whom are Syrian nationals. Seven people were killed and dozens were wounded in the clashes. It remains unclear who opened fire at the protesters, but the Lebanese army has stated that it is investigating the possible involvement of a serving soldier (DW, 17 October 2021). The site of the protest marks the border between east and west Beirut, and is well-known for sectarian clashes between Shiites, Sunnis, and Christians during the 1975 Lebanon civil war (Jerusalem Post, 17 October 2021). Hezbollah quickly accused the Christian Lebanese Forces of having orchestrated the attack on its members and on Amal Movement supporters (Jerusalem Post, 16 October 2021). The head of the Lebanese Forces Party, however, has denied these accusations and it remains to be seen who was behind the attack (Reuters, 16 October 2021). It is noteworthy to mention that families of those killed in the Beirut port blast have expressed support for the presiding judge in the case (Egypt Independent, 17 October 2021).