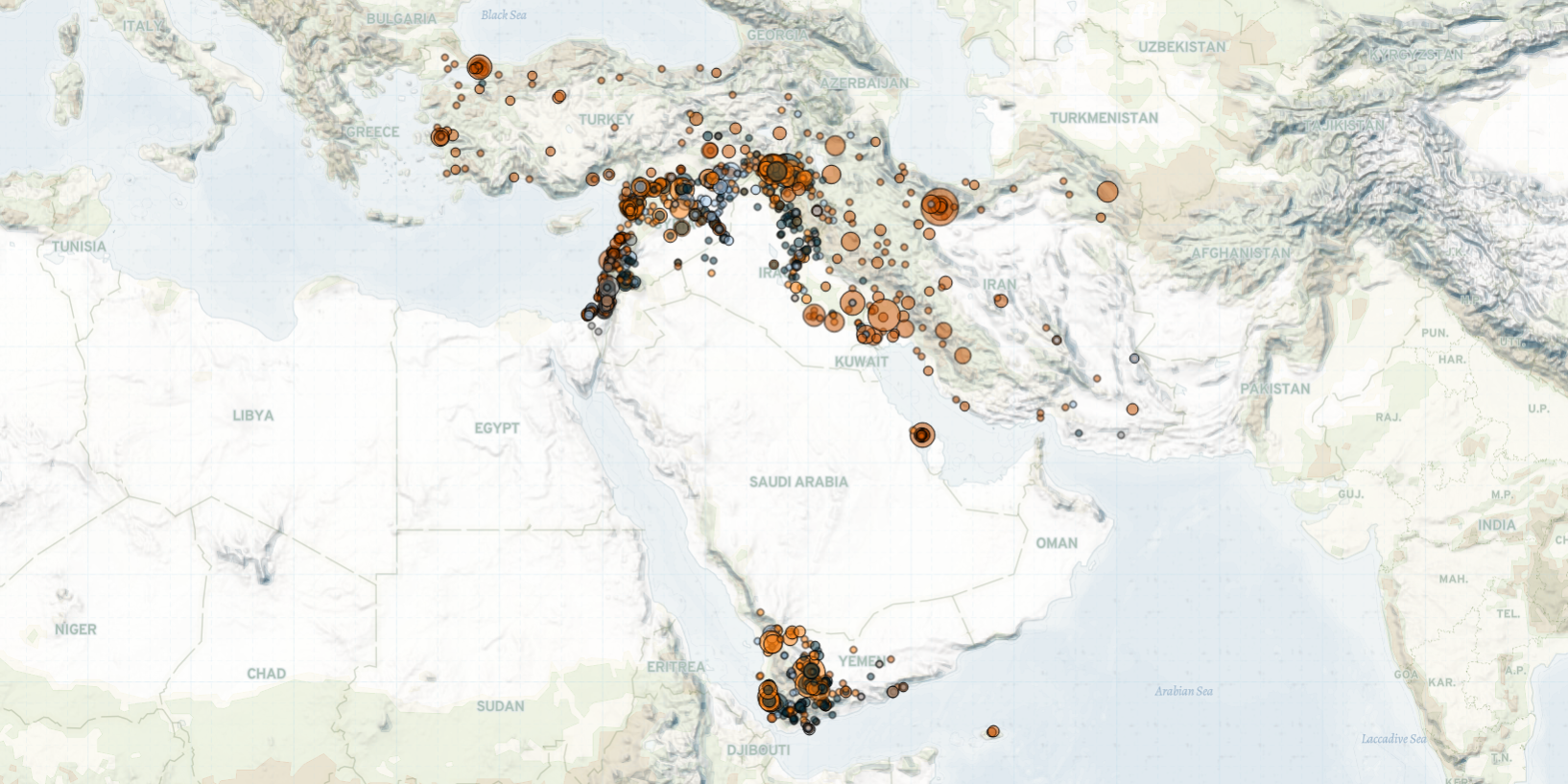 Last week in the Middle East, Houthi forces inflicted a major blow to pro-Hadi forces in Yemen as they captured several districts of the Shabwah governorate and also encountered significant successes in Marib. In Syria, a Global Coalition airstrike targeted a Hurras Al Deen vehicle near Idleb, killing two commanders. In Iraq, clashes broke out between Kurdish rioters and the Sulaymaniya Forestry Police against the backdrop of demolition operations targeting illegally-constructed houses. In Iran, nationwide protests were carried out by teachers, calling for improved working conditions. Meanwhile, in Turkey, students protested high dormitory fees, and unknown assailants attacked the office of the Democracy and Progression party in Istanbul. Finally, tensions remained high in the West Bank following the capture of all remaining escapees from the Israeli Gilboa prison break on 6 September, and a violent anti-settlement demonstration led to the death of a Palestinian.

In Yemen, Houthi forces last week launched one of their most successful operations since the Marib offensive in February 2021. Houthi forces attacked and claimed control over Ain, Bayhan, and Usaylan districts in the Shabwah governorate, launching operations from areas that they had captured in Al Bayda governorate in late July. Houthi forces also launched attacks against pro-Hadi forces in southern Marib governorate last week. From their new territory in Shabwah, they entered Harib district and took control of the district capital. They are encircling pro-Hadi forces in Al Abdiyah district, while in Jubah district they targeted the strategic Khashinah military camp. Houthi forces also cut off the Shabwah-Marib supply lines in Usaylan district. Saudi-led coalition airstrikes, which were minimal in Shabwah last week, will likely be determinant in preventing further advances by Houthi forces.

Together, Marib and Shabwah governorates represent the stronghold of pro-Hadi Islah-affiliated forces in Yemen, and are of significant strategic importance to the Hadi government. Along with the Hadramawt Valley — also under Hadi control — Marib and Shabwah account for the entirety of Yemen’s oil and gas production (Sanaa Center for Strategic Studies, 9 September 2020). Following their latest advances, Houthi forces are now only dozens of kilometers from the Block 5 facilities in Usaylan district.

In southern Yemen and the city of Taizz, demonstrations over deteriorating living conditions continued last week, albeit to a much smaller extent than the week before. In Hodeidah governorate, protesters took to the streets of Al Khawkhah and At Tuhayta cities to denounce the execution of nine Yemenis from the region by a Houthi firing squad in Sanaa, in violation of international human rights law (OHCHR, 21 September 2021).

In Syria, Russian warplanes carried out airstrikes last week on numerous locations in the Jabal Al Zawiya region of Idleb, as well as the western Aleppo countryside. Meanwhile, the Global Coalition carried out a drone strike on a Hurras Al Deen vehicle traveling on the Idleb-Bennsh Road on 20 September, killing two commanders. In eastern Syria, Turkish forces and the Syrian National Army (JWS) clashed with the Syrian Democratic Forces (QSD) along frontlines in the Ras Al Ain and Ein Issa areas of Al Hasakeh and Ar-Raqqa, respectively. Meanwhile in Dar’a province, the regime’s military intelligence and Russian military police entered Tafas as part of the reconciliation agreement reached earlier (Middle East in 24, 18 September 2021).

In Iraq, Kurdish rioters clashed with Sulaymaniyah Forestry Police and Internal Security Forces (Asayish) last week in the Kurdish-majority village of Tuwaspi in Sulaymaniyah province. The clashes were triggered when Sulaymaniyah authorities demolished dozens of illegally-constructed houses in the village. Seven forestry police and Asayish members, and five rioters, were injured during the clashes. The forestry police claim that some rioters opened fire on police (Rudaw, 21 September 2021).

In Iran, schoolteachers protested across the country demanding better working conditions in response to low wages and high rates of inflation. Demonstrating teachers demand the implementation of a new law that is set to rank teachers based on their qualifications; their salaries could then be raised in accordance with their acquired ranks (Iran International, 18 September 2021). The law has been passed by the parliament’s education committee, but has yet to be approved, likely as this would create new financial obligations for the Iranian government (Iran International, 25 September 2021). Protests are expected to increase following the start of the new educational year on 25 September (Iran News Update, 25 September 2021).

Last week in Turkey, university students demonstrated in major cities against high dormitory fees and rental prices, forming a new movement called ‘We cannot find housing’ (Bianet, 23 September 2021). Turkish police forces dispersed and arrested student demonstrators in Cankaya, Tepebasi, and Kadikoy. Also last week, an unidentified group opened fire on the office of the Democracy and Progress Party (DEVA) in Arnavutkoy, Istanbul. The attack occurred at night when the building was empty, leading only to material damage (Aydinlik, 21 September 2021). DEVA is a Turkish opposition party working to return migrants and refugees to their places of origin, vowing to crack down on them if they are elected to power (Ahval News,21 August 2021).

In Palestine, tensions remained high in the West Bank, despite a fall in riot events following the capture of the final two Palestinian prison escapees on 19 September in Jenin city. On 6 September, six high-profile Palestinians affiliated with Palestinian Islamic Jihad and the Al Aqsa Martyrs Brigade had escaped Gilboa prison in Israel. While the arrest of the escapees was carried out without any violence reported, a shootout erupted between unidentified Palestinians and Israeli military forces in the same area beforehand. Students affiliated with the Fatah Movement and the Association of Women Committees for Social Work (AWCSW) held numerous peaceful protests in solidarity with the six Palestinian prisoners. Protesters call on international human rights organizations and the International Committee of the Red Cross (ICRC) to put an end to the Israeli reprisal measures imposed on Palestinian prisoners in the jailbreak’s aftermath. Protesters also demand protection for all prisoners in Israeli detention facilities. Meanwhile, the Night Confusion Unit — a group of Palestinians who have been demonstrating against the construction and expansion of Israeli settlements in the West Bank and Gaza Strip — clashed with Israeli soldiers on Jabal Subaih in Bayta, where Israeli settlers aim to expand the illegal settlement of Evyatar (Haaretz, 7 June 2021). A Palestinian demonstrator was killed and at least 17 others were wounded by rubber bullets during the clash.