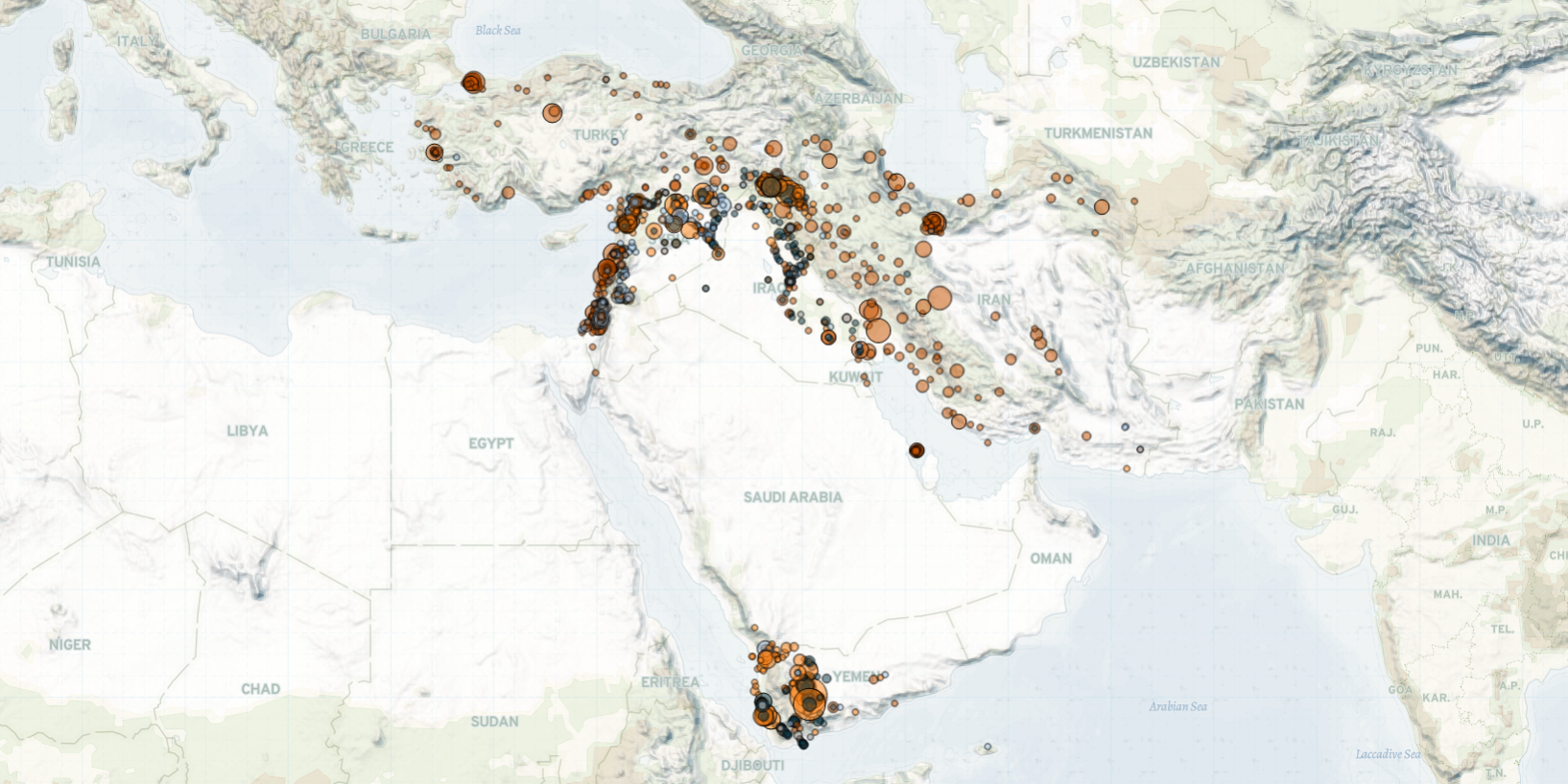 Last week in the Middle East, clashes subsided in Marib governorate in Yemen at the same time as Saudi-led coalition airstrike events in the governorate reached record levels.1Note that one airstrike event can include several airstrikes and that the number of airstrikes can greatly vary from one event to another. As ACLED is an event-based dataset, ACLED records airstrike events rather than airstrikes. This ensures consistency in the data, especially given the overall rare reporting on exact airstrike counts. Saudi-led coalition airstrikes also hit Houthi targets in Sanaa city, a day after a Houthi missile attack struck a military base in Saudi Arabia. In Syria, two Turkish fighters were killed in an IED attack by an unidentified armed group in northwest Idleb. Meanwhile, Qasioun Brigades carried out an IED attack on a bus carrying regime fighters in the capital Damascus, killing 13 fighters. In Iraq, thousands of supporters (Al Jazeera, 27 October 2021) of Shiite Muslim electoral blocs and groups affiliated with the Popular Mobilization Forces protested the results of the parliamentary elections held on 10 October, calling for a recount of the votes. Clashes between Palestinian worshippers and Israeli forces underpinned the highest levels of political violence in Jerusalem since May 2021. Meanwhile, Israeli settler attacks against Palestinians and their olive harvests continued in the West Bank.

In Yemen, airstrike events in Marib governorate reached the highest recorded levels last week since the beginning of ACLED coverage in January 2015. The intensification in Saudi-led coalition airstrikes since 10 October, on Al Jubah and Al Abdiyah districts in the south of the governorate and on Sirwah district to the west of Marib city, has resulted in the killing of more than 1,400 Houthi fighters, according to Saudi-led coalition figures. Possibly because of this, the number of clashes in the governorate decreased by nearly half last week compared to the week prior. This did not prevent Houthi forces, however, from completing the capture of Al Abdiyah district. In Al Jubah district, clashes took place towards the road junction leading to the district administrative center.

In the city of Sanaa, Amanat Al Asimah governorate, Saudi-led coalition airstrikes targeted several Houthi sites used for launching drone and missile attacks while Houthi sources reported that one of the strikes resulted in civilian fatalities. This was the highest number of airstrike events recorded in the Yemeni capital since March 2021. These airstrikes were likely a direct response to the launch of five Houthi ballistic missiles on the Saudi Al Wajib military force in Jizan in Saudi Arabia the day prior. Houthi forces claim that the attack killed and injured 35 Saudi soldiers (Al Masirah, 21 October 2021), which would make it one of the deadliest attacks targeting Saudi forces recorded by ACLED. Saudi forces also intercepted three other Houthi drone and missile attacks on Jizan and Najran.

In Syria, fatal attacks against Turkish forces continued last week in the northwest, with one incident recorded in Idleb. For the second consecutive week, an IED, planted by an unknown group, targeted a Turkish military convoy passing near Kafraya-Ma’arrat Tamasrin junction, killing two Turkish soldiers and injuring four others. Meanwhile, a Turkish drone targeted a civilian vehicle in the city of Ain Al Arab in Aleppo, killing five civilians. In response to the attack, local residents organized a demonstration during which they hurled stones at Russian forces who, according to the demonstrators, failed to respond to Turkish attacks on civilians.

Regime forces intensified their shelling of opposition-controlled areas in northwest Idleb last week. Regime shelling of Ariha killed at least eight civilians, including school children and teachers. Regime shelling of northwest Idleb also resulted in the killing of four HTS fighters, including the chief of a HTS security detachment, in Sarmada. The shelling of Ariha was reportedly in response to an IED attack on a bus carrying regime fighters in the city of Damascus, which killed 13 fighters. Qasioun Brigades (Saraya Qasioun), which operates in Damascus and its countryside, claimed responsibility for the attack. Attacks on regime forces in the capital and its countryside have been rare since regime forces took control of Rural Damascus governorate in May 2018.

In central Syria, regime forces and pro-regime militias clashed with the Islamic State (IS) in the Al-Rasafah desert in Ar-Raqqa last week, during which 15 regime and pro-regime militia fighters and eight IS fighters were killed. Meanwhile, an unidentified armed group, believed to be a pro-Iran militia, launched a drone strike against US forces based at Al-Tanf military base in Rural Damascus, which did not result in any reports of casualties.

In Iraq, thousands of Iraqis demonstrated against the results of the 10 October 2021 parliamentary elections across a number of provinces last week (Al Jazeera, 27 October 2021). The largely peaceful demonstrators blocked various roads and streets across the provinces. The demonstrations were led by political groups which did not fare well in the elections, including groups affiliated with the Popular Mobilization Forces and supporters of Shiite Muslim electoral blocs. Demonstrators demand a recount of the vote, with some alleging electoral fraud (Basnews, 17 October 2021).

Meanwhile, IS attacks against civilians and Iraqi forces continued last week at a similar pace as seen in previous weeks. Likewise, clashes, shelling, and airstrikes involving Turkish forces and the Kurdistan Workers’ Party continued along the Turkey-Iraq border.

In Palestine, clashes erupted between Israeli police and Palestinian worshippers at the Damascus Gate of the Al Aqsa compound in Jerusalem last week. The clashes broke out when police arrived at the site where Palestinians had gathered to mark the birth of the Prophet Muhammad on 19 October. Police deployed tear gas and stun grenades, and beat the rioters, who pelted police with stones; 17 rioters were wounded, and another 22 were arrested. These clashes mark the most severe clashes in the area since the outbreak of violence in May 2021. Further clashes broke out at the Damascus Gate on the following day, in response to the visit of a member of the Knesset (the Israeli Parliament) to the Al Aqsa compound.