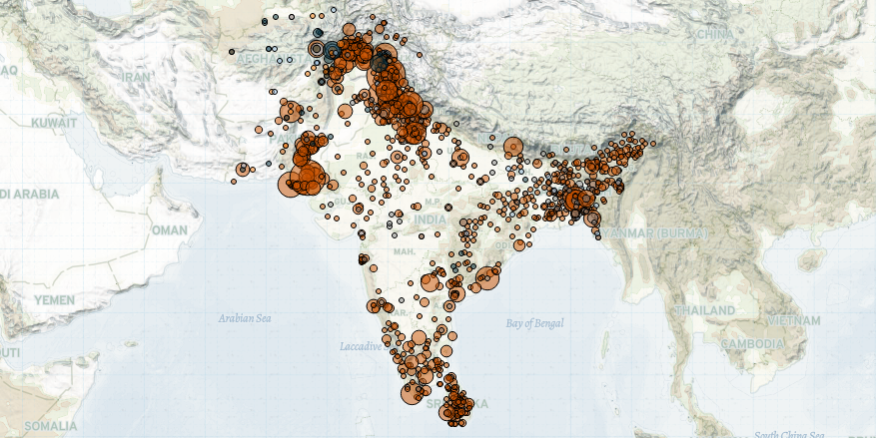 In Pakistan, the TTP stepped up attacks against security forces in Khyber Pakhtunkhwa province last week — resulting in a 200% increase in political violence in the province last week relative to the past month (see ACLED’s Early Warning Research Hub for more). Suspected TTP militants killed four police officers in a targeted shooting in Lakki Marwat city and two soldiers across separate attacks at military checkposts in the Degan and Ghariom areas. After the Taliban takeover of Kabul on 15 August, the TTP renewed their allegiance with the Afghan Taliban and vowed to take over Pakistan’s tribal border region with Afghanistan (Reuters, 5 September 2021). Meanwhile, the TTP also took responsibility for killing a police officer guarding a polio vaccination team in Dera Ismail Khan city. The attack took place on World Polio Day on 24 October, which highlights efforts to eradicate the virus and honors polio workers (Gandhara, 24 October 2021). The TTP has previously targeted polio teams and police guards, claiming that the vaccination campaigns are a plot to sterilize children (Gandhara, 24 October 2021).

Meanwhile, violent clashes resumed between the TLP and Pakistani security forces, as the banned Islamist party continued its march to Islamabad last week, demanding the release of its imprisoned chief, Saad Rizvi. The march had been suspended the week prior after the government agreed to withdraw pending charges against Rizvi (Deutsche Welle, 24 October 2021). Violent demonstrations picked up last week in response to Prime Minister Imran Khan’s statement that he would not close the French Embassy. The TLP has been demanding the closure of the embassy since October 2020 when French President Macron defended the publication of caricatures of the Prophet Muhammad in the French magazine Charlie Hebdo (The Washington Post, 30 October 2021). The banned Islamist party also demands the release of its chief, who was arrested last year during anti-French demonstrations (Gandhara, 22 October 2021). At least four police officers died and over 30 were injured, as thousands of TLP supporters clashed and exchanged fire with security forces in Gujranwala district. Following the clashes, Pakistani authorities deployed paramilitary units and blocked off roads to Islamabad to deter demonstrators from reaching the capital (Reuters, 29 October 2021).

In India, Maoist rebels and security forces exchanged fire along the Telangana-Chhattisgarh state border last week, leading to the death of three rebels. In the week prior, police had intensified combing operations in the area based on intelligence suggesting that Maoist leaders had entered Telangana from their stronghold state, Chhattisgarh (New Indian Express, 25 October 2021). Meanwhile, the Communist Party of India-Maoist (CPI-Maoist) alleged that the encounter was faked and called for a statewide shutdown in Telangana state on 27 October (India Today, 25 October 2021). Another CPI-Maoist operative was also killed during an encounter in Bihar state. Maoist violence has declined thus far in 2021 and has been concentrated in a few districts.