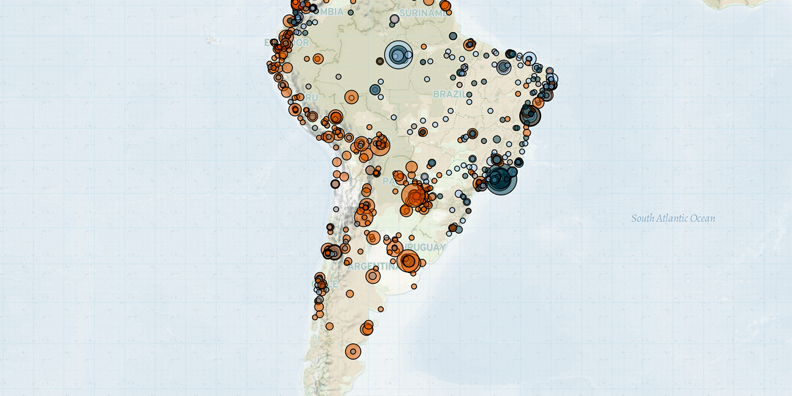 Last week in South America, demonstrators marched to request an audience with an International Criminal Court (ICC) representative during his visit to Venezuela. In Chile, two Mapuche Indigenous leaders died in a clash with state forces during a demonstration against the ongoing state of emergency in the country’s southern provinces. In Colombia, farmers protested government coca crop eradication programs. Furthermore, armed clashes between state forces and dissidents of the Revolutionary Armed Forces of Colombia (FARC) continue in the Cauca department. In Brazil, an armed clash between police forces and bandits led to the killing of 26 members of the group.

In Venezuela, demonstrators took to the streets to demand an audience with ICC Chief Prosecutor Karim Khan, during his visit to the country last week. Demonstrators urged the ICC to investigate alleged human rights abuses by the Venezuelan government, including the continued detention of more than 300 political prisoners in poor health and sanitary conditions (El Impulso, 3 November 2021). Khan’s three-day visit to Venezuela was part of a broader mission to increase ICC engagement in Colombia and Venezuela (ICC, 25 October 2021).  Following his visit, Khan announced that the ICC would open a formal investigation into alleged crimes against humanity committed in Venezuela  (ICC, 5 November 2021). The investigation follows a preliminary examination launched in February 2018 into accusations that state forces carried out extrajudicial killings, arbitrary detentions, and excessive use of force against anti-government protesters in 2017 (AP News, 3 November 2021).

In Chile, two Mapuche Indigenous leaders died during a clash between demonstrators and military forces on 3 November in the Bíobío region. Demonstrators called for an end to the ongoing state of emergency in the country’s southern provinces. President Sebastián Piñera declared a state of emergency covering four provinces in the Biobío and Araucanía regions on 12 October, in response to a series of attacks by suspected Indigenous militia groups (BBC, 14 October 2021). On 4 November, hundreds of citizens took to the streets to protest the death of the Mapuche leaders (La Nación, 4 November 2021). Demonstrators attempted to break into the National Congress, and police dispersed the crowd with water cannons. Since the beginning of the state of emergency, the government has deployed 2,000 soldiers to Biobío and Araucanía provinces, in what demonstrators claim is an attempt to suppress the Mapuche community and their fight to recover their ancestral lands (AP News, 4 November 2021). Mapuche groups claim these areas as part of their ancestral lands, which they say  are under threat from agriculture and forestry industries (for more, see this ACLED analysis piece: Understanding Indigenous Conflict in Chile).

In Colombia, farmers staged demonstrations against forced coca crop eradication programs in Iscuandé municipality, Nariño, last week. More than 2,000 coca growers demonstrated for several days in a row against crop eradication programs by military police (Diario La Libertad, 1 November 2021). The 2016 Peace Agreement between the FARC and the government includes the introduction of alternative livelihood programs for families who economically depend on illegal plantations. However, instead of providing viable alternative livelihoods,  the current administration has placed coercive measures, such as manual destruction, as the epicenter of its attempt to eradicate coca plantations (Crisis Group, 3 September 2020).  The cultivation of illicit coca crops represents a fundamental economic survival strategy, considering many coca leaf producers do not have viable alternative livelihoods (Crisis Group, 3 September 2020).

Furthermore, in Colombia, armed groups and state forces continued to engage in armed clashes last week.   Armed clashes continue to center on the Cauca department, where military forces are fighting FARC dissidents from the Second Marquetalia and Carlos Patiño front over the territorial control of Argelia municipality (Periodico Virtual, 2 November 2021). The coca trade has boomed for many years in the valleys of the Micay river in Argelia,  strongly shaping violent conflict in the region (El Tiempo, 12 December 2015).

Finally, in Brazil, police clashed with a new cangaço armed group during an arrest operation in Minas Gerais state, which culminated in the killing of 26 members of the group. The use of the term cangaço links to a form of social banditry that took place in the northeast of Brazil between 1870 to 1930. This modality of crime involves heavily organized armed groups besieging small- and medium-sized cities to intimidate local populations. Their practices consist of blowing up bank agencies, post offices, ATMs, and lottery houses. This phenomenon is the backbone of other types of actions carried out by organized criminal organizations in the region (Small Wars Journal, 9 May 2021). The stolen money from these financial institutions is used by the groups to acquire new weapons, bolstering organized crime in the country (UOL, 31 August 2021).