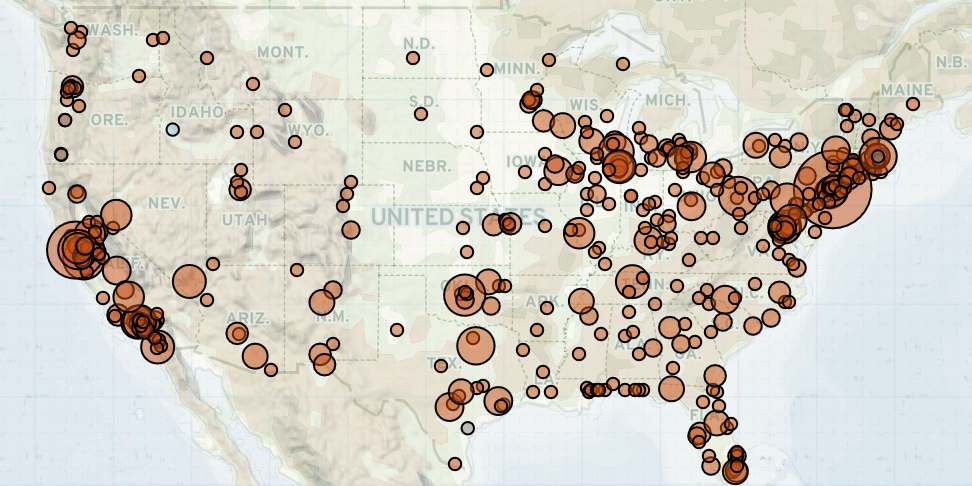 Demonstrations in the United States significantly increased last week compared to the week prior, reaching their highest numbers since the week of the Women’s March on 2 October 2021. This comes amid a surge in demonstrations related to the Kyle Rittenhouse verdict, the commutation of Julius Jones’ death sentence, campus sexual assaults and harassment, and striking Kaiser Permanente engineers in northern California. Demonstrations against the Cuban government also spiked last week, particularly in Florida, following a stand-off between Cuban authorities and anti-government activists in La Habana (NBC News, 14 November 2021) (for more, see ACLED’s Regional Overview for Mexico, Central America, and the Caribbean: 13-19 November 2021). Labor-related demonstrations accounted for more than one in four demonstrations last week, comprising the largest share of demonstration events. Meanwhile, demonstration events related to the COVID-19 pandemic, which held steady compared to the week prior, constituted the second-largest share of demonstrations. Militias and militant social movements participated in multiple demonstrations last week and also carried out a number of training and recruitment events.

On 19 November, Kyle Rittenhouse — who fatally shot two people and injured another during an August 2020 demonstration against the police shooting of Jacob Blake in Kenosha, Wisconsin — was acquitted of all charges, including two homicide counts (NPR, 19 November 2021). His highly televised trial was the source of daily demonstrations both against and in favor of his conviction on the steps of the Kenosha County Courthouse last week. Demonstrators armed with guns were present on each of the final three days of the trial, and one person armed with an automatic rifle patrolled the area on 19 November, purportedly to provide “security” for Black Lives Matter (BLM) demonstrators (Twitter @ FordFisher, 19 November 2021). White nationalists and QAnon adherents rallied in favor of Rittenhouse on 17 November, while Oath Keepers also rallied for the same cause on 19 November (Twitter @MrOlmos, 17 November 2021; Twitter @MrOlmos, 19 November 2021). After the jury delivered not guilty verdicts on all five counts, opponents of the decision held demonstrations, including two violent demonstrations, across Wisconsin and in at least five other states. The trial contributed to a revival of pro-BLM demonstrations last week — the highest number of such demonstrations since the week of 10 July 2021, when an increase in pro-BLM demonstrations coincided with Breonna Taylor’s birthday.

Meanwhile, Oklahoma Governor Kevin Stitt made an eleventh hour commutation on 18 November for Julius Jones, whose execution had been scheduled to take place the same day (CNN, 19 November 2021; Washington Post, 18 November 2021). Jones, a Black man who was convicted of the fatal 1999 shooting of a businessman in Oklahoma City, has maintained his innocence, claiming that he was framed by his friend and co-defendant (Oklahoman, 21 November 2021). Numerous demonstrations calling on Governor Stitt to grant Jones clemency took place across Oklahoma last week, with the majority involving students walking out of schools to demonstrate. Demonstrations calling for improved conditions for prisoners, the majority of which were in support of Jones, reached their highest levels since April 2020 last week. The high number of demonstrations calling for improved conditions for prisoners in April 2020 focused on conditions related to COVID-19, as the coronavirus spread rampantly in prisons nationwide (for more, see the ACLED report A National Emergency: How COVID-19 is Fueling Unrest in the US).

Student demonstrations last week almost doubled last week compared to the week prior, with students rallying most frequently against sexual assault and harassment on school campuses. On 19 November, police tased, pepper-sprayed, and arrested student demonstrators at Little Elm High School in Little Elm, Texas. School administrators claim that students blocked hallways and spat on officers, leading to the police response. Students had staged the  demonstration to oppose an alleged sexual assault of a student by a peer on a bus. School administrators claim that the allegation, which was initially shared on Snapchat, is misinformation (Dallas Morning News, 22 November 2021). A smaller subset of student demonstrations, those involving school walkouts, reached their highest levels since ACLED began collecting data in 2020. While a portion of these were related to sexual assaults, the largest share of school walkout-related demonstrations called for clemency for Jones.

The majority of labor-related demonstrations last week, including those involving teachers and health workers, were driven by workers calling for better pay and working conditions. A smaller number of labor-related demonstrations involved workers demonstrating against vaccine mandates. Around one in five labor-related demonstration events were organized by the Service Employees International Union (SEIU) in solidarity with striking Kaiser Permanente engineers. Hundreds of Kaiser Permanente engineers have been on strike in northern California for two months, calling for improved working conditions amid stalled contract negotiations (KQED, 18 November 2021). These solidarity demonstrations, many of which involved health workers, were held in at least 14 cities across California on 18 and 19 November.

Proud Boys attended a large demonstration opposing a statewide coronavirus vaccine mandate for students outside the capitol building in Sacramento, California on 15 November (Sacramento Bee, 22 November 2021). Notably, this demonstration also featured members of Mamalitia — an all-women’s constitutionalist and pro-Second Amendment militia that opposes coronavirus-related mandates. Students were seen rallying alongside members of both militant groups. The Proud Boys were also involved in demonstrations opposing student groups twice last week. They countered a student-led demonstration in favor of a recently released LGBT+ book in Bunnell, Florida, on 16 November, and later appeared at a student rally against school resource officers in Gresham, Oregon for an unreported cause, on 18 November (Twitter @RuthlessWe, 18 November 2021; Twitter @Johnnthelefty, 18 November 2021).