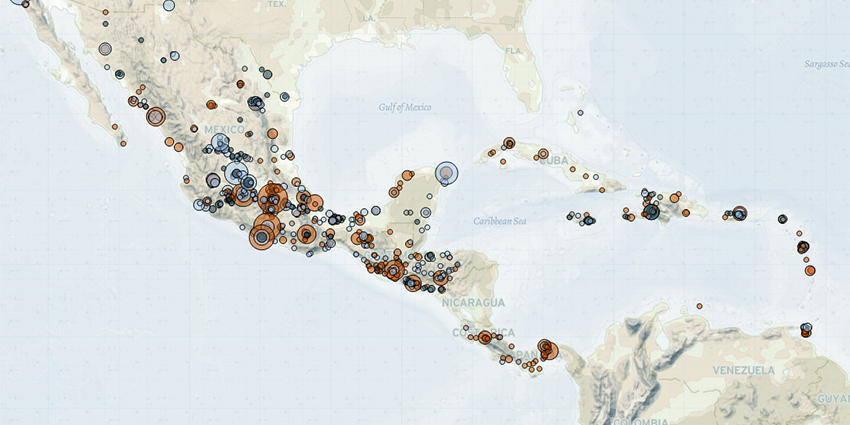 Last week in Mexico, Central America, and the Caribbean, violence increased in Honduras amid an escalation of violence targeting politicians ahead of the general elections on 28 November. In Cuba, police arrested several members of opposition movements, and government supporters staged several ‘acts of repudiation’ against critics of the government, both preventing anti-government demonstrations scheduled for 15 November. In Mexico, violence against civilians grew deadlier in Zacatecas amid attacks by criminal groups, while violence also increased in Guerrero and Puebla states. Meanwhile, in Guadeloupe, demonstrations against COVID-19 restrictions turned violent. In Guatemala, members of the Farmers Development Committee (CODECA) staged anti-government demonstrations for two consecutive days, following an increase in food prices and accusations of corruption against the government.

In Honduras, political violence spiked last week as armed men targeted candidates and supporters participating in the last campaign rallies before the 28 November general elections. In Francisco Morazan department, a gunman shot and killed the mayor of Cantarranas from the opposition Liberal Party of Honduras (PLH) during an event to close his political campaign in the rural village of San Luis on 13 November. The victim was seeking re-election for the fifth consecutive time (RFI, 17 November 2021). Police arrested the perpetrator, though authorities’ preliminary investigations suggest that more people were involved in the attack (La Prensa, 17 November 2021). Following the killing of the mayor, his supporters blocked roads with burning tires, demanding justice. Similarly, armed men staged attacks on mayoral and council candidates running for the PLH, the Liberty and Refoundation (LIBRE), and the Everyone for Change (TPC) parties in the departments of Santa Barabara and Olancho. Two candidates were killed and one seriously injured in the attacks. Meanwhile, armed men attacked supporters of the governing National Party of Honduras (PNH) during rallies in Copan and El Paraiso departments. Three government supporters were killed and several others injured. Unidentified suspects also shot at the headquarters of the Savior Party of Honduras in Yoro department on 17 November, with no injuries reported. This violence contributed to a 126% increase in violence in Honduras last week relative to the month prior (see ACLED’s Early Warning Research Hub for more).

According to local experts, the attacks against politicians are related to several factors, including lack of trust in the electoral system and disputes between political elites seeking to guarantee their control over local politics and finances (Revistazo, 10 November 2021). Moreover, such attacks have also been attributed to the actions of criminal groups to support candidates that favor their interests (El Heraldo, 28 July 2021).

In Cuba, a regime crackdown on opposition activists prevented the staging of anti-government ‘Civic March for Change’ demonstrations called for 15 November by the opposition Archipelago movement. Between 14 and 15 November, supporters of the government staged acts of repudiation — state-led public humiliation or violence towards regime critics — against several promoters of these demonstrations in at least nine provinces. In La Habana, government supporters and members of the Communist Party of Cuba (PCC) gathered outside the house of the leader of the Archipelago movement, as police blocked the surrounding streets, preventing him and his family from leaving their house. Government supporters also hung Cuban flags above his building blocking the leader’s window, while journalists and other activists reported that phone lines and internet access had been blocked (EFE, 14 November 2021). Meanwhile, police arrested other members of the Archipelago movement, journalists, and leaders of other opposition organizations that supported the call for the anti-government demonstrations. According to local organizations, authorities detained more than 50 people on 15 November (Swissinfo, 16 November 2021). Despite this, pot-banging protests were recorded in La Habana, with members of the Catholic Church also staging marches in support of the ‘Civic March for Change’ in La Habana and Bejucal.

In Mexico, gang-related attacks in Zacatecas state grew deadlier last week, amid numerous multiple-fatality events. In Cuauhtemoc municipality, members of a criminal group kidnapped and killed 10 men, leaving their bodies hanging from a bridge. Similar killings, with multiple fatalities,  were also reported in Fresnillo, Loreto, and Valparaiso municipalities. Violence in this state is mostly related to disputes between the Jalisco New Generation Cartel (CJNG) and the Sinaloa Cartel for the control of the production of synthetic drugs and drug trafficking routes (El Pais, 20 November 2021). Though ACLED records a reduction of political violence events last week compared to the week prior, ACLED records the largest number of weekly fatalities last week since June 2021.

Elsewhere, spikes in violence against civilians in Guerrero and Puebla states resulted in 160% and 300% increases in violence in the states last week, respectively, relative to the month prior (see ACLED’s Early Warning Research Hub for more). Amid the attacks in Guerrero state, unidentified armed men killed a former Cochoapa el Grande councilor on 15 November. Though the perpetrators and motivations of the attack remain unknown, violence against politicians in Guerrero is often related to the actions of criminal groups and self-defense groups that seek to influence local politics (Mexico Violence Resource Project, May 2021). In addition, conflicts between local gangs for the control of extortion and drug markets have prompted increased attacks against civilians, particularly in the tourist areas of the state, like the city of Acapulco (Animal Politico, 5 November 2021). In Puebla, the majority of attacks were recorded in the capital, Heroica Puebla de Zaragoza. According to local experts, violence in this state is linked to the actions of local criminal groups that are involved in drug, fuel, and human trafficking activities (El Universal, 29 August 2021).

In Guadeloupe, pandemic-related measures triggered demonstrations throughout last week, following a call for a general strike by social movements and workers’ unions. Residents and labor unionists, including firemen and caregivers, staged roadblocks across the island, rejecting vaccine mandates for health workers and the compulsory use of health passes to enter public places (France 24, 17 November 2021). Demonstrations turned violent as rioters set barricades, looted stores, and destroyed private property. In Les Abymes, clashes between rioters and police officers left at least four people injured, while rioters set houses and stores on fire in Point-Pietre. Though demonstrations initially focused on COVID-19 restrictions, participants have since broadened their demands to include calls for solutions to ongoing inequality, access to potable water, and more job opportunities (RFI, 22 November 2021). Less than half of the population of Guadeloupe has been vaccinated against COVID-19 (DW, 20 November 2021). Last week, ACLED records the highest number of demonstration events in a single week in Guadeloupe since the start of ACLED coverage in 2018.

In Guatemala, CODECA staged demonstrations across the country on 15 and 16 November, demanding solutions for increasing food and public service prices, and the resignation of President Alejandro Giammattei, who they accuse of mismanagement and corruption (La Razon, 17 November 2021).  Protesters also condemn the state of siege in El Estor municipality. The government implemented the state of siege on 24 October in response to anti-mining riots involving members of local Indigenous communities (for more, see ACLED’s Mexico, Central America, and the Caribbean Regional Overview of 23-29 October).