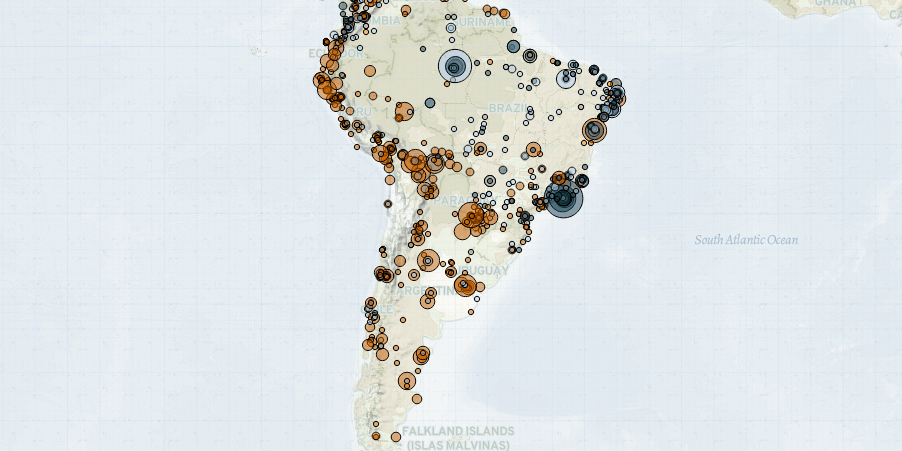 Last week in South America, political violence slightly decreased compared to the week prior, as did demonstrations, though the latter more significantly. In Venezuela, protests against voting irregularities continued for the second consecutive week. In Chile, Indigenous militia activity increased in the south of the country ahead of the presidential runoff election on 19 December. Meanwhile, in Colombia, violence levels increased, with multiple dissident groups of the Revolutionary Armed Forces of Colombia (FARC) engaging in violent events in the Cauca department. Finally, in Brazil, violence increased in Sergipe state amidst reports of shoot-outs and targeted attacks, while an operation to curb illegal gold mining ended with the seizure and destruction of dozens of boats in Amazonas state (G1, 27 November 2021).

In Venezuela, protests continued last week for the second consecutive week against irregularities in the 21 November regional elections. Supporters of Freddy Superlano, the opposition Democratic Unity Roundtable (MUD) candidate for governor in Barinas state, carried out protests during the week to demand recognition of their candidate’s victory. On 29 November, the country’s Supreme Court of Justice issued an injunction invalidating election results in Barinas and calling for new elections (BBC, 1 December 2021). While acknowledging that the opposition won more votes in the state, the Supreme Court of Justice declared Superlano is ineligible to hold elected office and ordered new elections – without Superlano – to be scheduled for 9 January 2022 (BBC, 1 December 2021). Superlano was disqualified on the grounds that there were administrative penalties deriving from his work as a legislator from 2015 to 2020 (San Diego Union Tribune, 4 December 2021). The race for control of Barinas state is particularly symbolic, as it is the birthplace of former United Socialist Party of Venezuela (PSUV) president Hugo Chávez, and is currently governed by Chávez’s brother (Efecto Cocuyo, 28 November 2021).

In Chile, tensions increased in the south of the country last week ahead of the presidential runoff elections scheduled for 19 December between left-wing candidate Gabriel Boric and far-right candidate José Kast (CNN Chile, 2 December 2021). In the Araucanía region, Indigenous militia groups continued to carry out arson attacks against farmhouses and logging companies. In one such attack, suspected Indigenous militiamen tied up a group of forestry workers in the Toltén commune, and set fire to several work vehicles. Meanwhile, in the Ercilla commune, police exchanged fire with members of a Mapuche militia during a police operation to recover a stolen vehicle. While there were no casualties, police arrested one of the armed suspects, the daughter of a prominent Mapuche leader. On 7 December, the senate approved a 15-day extension of the ongoing state of emergency — allowing for the ongoing deployment of military troops — in the provinces of Bío Bío, Arauco, Malleco, and Cautín (Biobio Chile, 7 December 2021). Violence in these four provinces already exceeds levels seen in 2020. The increasing reports of violence in the region has become a pressing topic in the presidential race (Pagina 12, 20 November 2021). In a recent speech, Kast expressed concern about the activity of Indigenous militias in the south of the country, calling the groups a threat to national security (La Tercera, 22 November 2021).

In Colombia, violence increased last week compared to the week prior, driven by ongoing fighting in the Cauca department. Armed men of the Carlos Patiño Dissident Front exchanged fire with military forces in Argelia municipality, resulting in the deaths of three dissidents. Meanwhile, more than 40 suspected dissidents of the Jaime Martinez Dissident Front attacked the police station in the Morales municipality (El Colombiano, 3 December 2021), though no casualties were reported in the clash. In Caloto municipality, military forces engaged in heavy fighting with close air support against dissidents from the Dagoberto Ramos Front. These events all contributed to a 140% spike in violence in the Cauca department last week relative to the month prior (see ACLED’s Early Warning Research Hub for more). The department of Cauca continues to be a hotspot of armed conflict as FARC dissident factions and other armed groups fight over the control of drug production and trafficking, and state forces increase their presence in the area (for more, see this ACLED Analysis piece: Understanding the Killing of Social Leaders in Colombia During COVID-19).

In Brazil, fighting between armed groups and targeted attacks continued to be reported across the country, despite an overall decrease in violence last week compared to the week prior. In Sergipe state, three fatalities were reported in less than 24 hours last week stemming from shoot-outs and targeted attacks against civilians. Although reasons behind the violence are unclear, several organized crime groups are present in the state, including the First Capital Command (PCC), and the Red Command (CV) and its ally the Crime Union of Rio Grande do Norte, who frequently fight over territorial disputes (G1, 28 July 2020; Tribuna do Norte, 5 September 2021). The recent events contributed to a 100% spike in violence in Sergipe state last week relative to the month prior (see ACLED’s Early Warning Research Hub for more).

Elsewhere in Brazil, a federal police, army, and Brazilian Institute for the Environment (IBAMA) joint task force carried out an operation in the Madeira River, Amazonas state, targeting illegal mining. Dozens of boats were either seized or destroyed amid mass illegal gold mining in the region, and several people were arrested (G1, 27 November 2021). After the operation, miners and their families took to the streets to protest against the seizure of their assets, calling for the legalization of their activities. Mining in the region is being financed by drug trafficking groups, who use the river routes to smuggle firearms, drugs, and other illegal goods (Jornal de Brasília, 26 November 2021). Under the current government, illegal mining has increased in several areas of the Amazon forest, threatening the lives and lands of Indigenous communities (Repórter Brazil, 7 July 2021; Instituto SocioAmbiental, 7 May 2021).