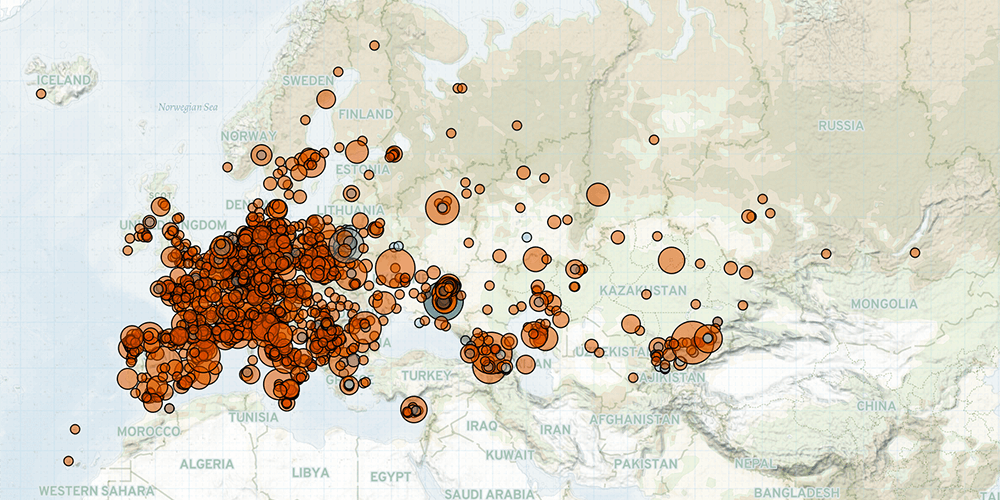 Over the past month in Europe, Central Asia, and the Caucasus, demonstrations against a gas price hike spread across Kazakhstan eliciting a violent response from the government. In Russia, the government continued to curb free speech by disbanding a renowned NGO and arresting relatives of exiled bloggers. Meanwhile, the migrant crisis continued along the Belarusian-Polish border. In Germany, there was a dramatic increase in demonstrations following the implementation of further coronavirus-related measures.

In Kazakhstan, demonstrations against a liquified petroleum gas (LPG) price hike beginning in the Mangystau region on 2 January escalated into nationwide anti-government demonstrations, with dozens of people killed amid violent state intervention. In response to the growing public discontent, Kazakh President Kassym-Jomart Tokayev introduced a 180-day price cap for fuel and accepted the government’s resignation on 5 January (SPGlobal, 5 January 2022; DW, 5 January 2022). Unable to quell the demonstrations, authorities declared a state of emergency and blocked access to internet and social media platforms across the country later the same day (New Times, 6 January 2022; Reuters, 10 January 2022). On 6 January, President Tokayev appealed to the Russia-led Collective Security Treaty Organization (CSTO) for assistance and granted a “shoot-to-kill” order to state security forces as CSTO troops began to arrive in Kazakhstan (RFE/RL, 6 January 2022; Al Jazeera, 7 January 2022). In Almaty, police and military units fired live ammunition at protesters, resulting in the deaths of dozens of people, while at least 14 people were killed during several days of demonstrations in Kyzylorda (Interfax, 6 January 2022; RFE/RL, 7 January 2022). Amid contradictory reports and limited access to information due to the internet and social media shutdown, the total number of deaths across the country remains hard to verify. The unrest in Kazakhstan also sparked demonstrations in other countries in the region. People expressed support for Kazakh demonstrators and opposed the deployment of the CSTO troops to Kazakhstan in Russia, Ukraine, Georgia, Kyrgyzstan, and Finland.

In Russia, a government crackdown on free speech continued over the past month, as the Supreme Court ruled to disband the renowned human rights organization Memorial (Caucasian Knot, 29 December 2021). The decision to disband the organization provoked demonstrations across the country, as well as international condemnation, including from the US, the EU, the Organization for Security and Co-operation in Europe (OSCE) and other international actors (RFE/RL, 28 December 2021). Since the late 1980s, Memorial researched Soviet-era political repression, while also running a human rights defense center with branches in many Russian regions (RBC, 28 December 2021). Meanwhile in Chechnya, authorities arrested more than 60 relatives of exiled bloggers critical of Chechen President Ramzan Kadyrov, in an attempt to intimidate the activists into ceasing their activities (Dosh Magazine, 29 December 2021). The move comes as Kadyrov engaged in a war of words with Turkey in recent weeks over its harboring of vocal Chechen opposition activists (Al-Monitor, 30 December 2021).

On the Belarusian-Polish border, the migrant crisis continued, contributing to a 501% increase in violence last month compared to the past year (see ACLED’s Early Warning Research Hub for more). Attempts by migrants to cross the border resulted in dozens of clashes with the Polish military and police forces. Amid the ongoing border crossing attempts, Belarusian military forces threw stones at Polish soldiers, targeted them with bright lights and laser beams, and damaged the wire fence and other border barriers (Straz Graniczna, 30 December 2021; Straz Graniczna, 28 December 2021). International organizations continue to report human rights abuses against the migrants stranded at the border by both Polish and Belarusian forces (Amnesty International, 20 December 2021; DW, 6 January 2022).

In Germany, demonstration activity increased over the past month, driven by demonstrations against coronavirus-related measures. The demonstrations were spurred on by the German government’s implementation of a fresh round of coronavirus-related measures in late December to curb the spread of the Omicron variant (Bloomberg, 6 January 2022) and the possibility of mandated vaccinations (DW, 11 January 2022). Many demonstrators referred to themselves as “walkers” going for “Monday walks” in an attempt to circumvent the new measures, which prohibit gatherings of greater than 10 people (DW, 11 January 2022). While police maintained a large presence at demonstration sites, only a minority of demonstrations over the past month have turned violent (DW, 29 December 2021). Despite this, violent demonstrations drove a 150% increase in violence last month compared to the past year (see ACLED’s Early Warning Research Hub for more). Demonstrations against coronavirus-related measures were also reported in Spain, France, Monaco, Italy, United Kingdom, Malta, Austria, Belgium, the Netherlands, Luxembourg, Slovenia, Hungary, Croatia, Montenegro, Russia, Kyrgyzstan, Georgia, and Ukraine, but to a much lesser extent.

Along the Armenia-Artsakh-Azerbaijan Line of Contact, the number of ceasefire violations decreased and remained low over the past month. On 14 December, Armenian Prime Minister Nikol Pashinyan and Azerbaijani President Ilham Aliyev held a meeting in Brussels, mediated by the European Council’s President Charles Michel (Armenian Weekly, 15 December 2021). During the meeting, the two sides agreed to reopen railway lines between the two countries and to continue dialogue (168 Hours, 15 December 2021). Additionally, Azerbaijan returned 15 prisoners of war back to Armenia (Caucasian Knot, 19 December 2021; 168 Hours, 29 December 2021).

In the Donbas region of Ukraine, fighting between Ukrainian government forces and Russian-led forces decreased over the past month compared to the weeks prior. During this period, there were 122 armed clashes, 233 shelling incidents, and two fatalities reported.