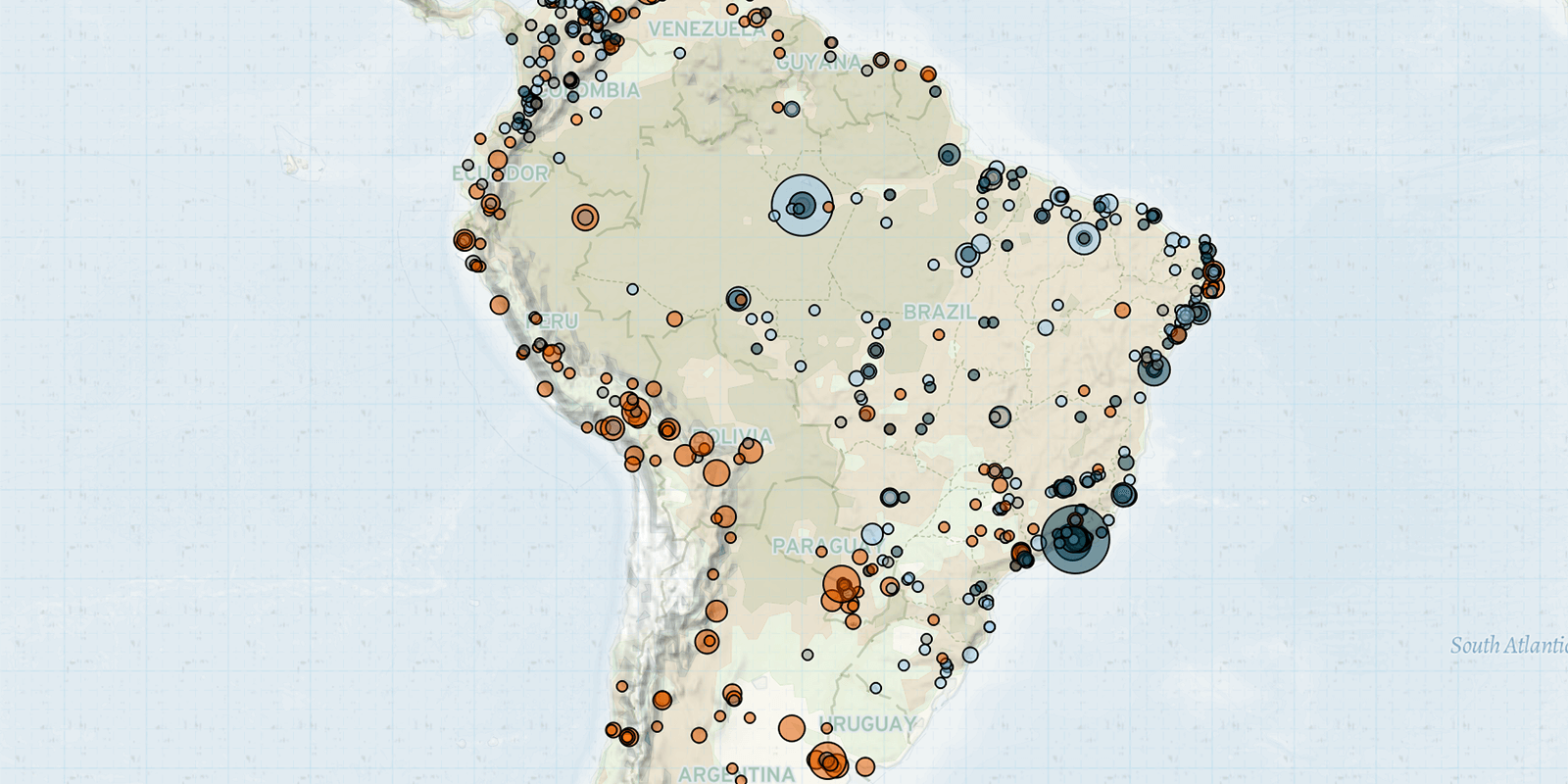 Last week in South America, violence remained at the same levels compared to the week prior, while demonstrations slightly decreased. In Brazil, three members of the same family of environmentalists were shot and killed in Pará state. At the same time, violence increased in Mato Grosso state amid clashes between state forces and organized crime groups. Violence involving drug trafficking groups continued to occur in Rio de Janeiro state. In Colombia, clashes between state forces and dissident groups of the Revolutionary Armed Forces of Colombia (FARC) increased last week, while a series of attacks against vulnerable groups took place in the Montes de Maria region. In Bolivia, protests against coronavirus-related measures took place for the second consecutive week. Finally, in Venezuela, an opposition candidate was elected as the next governor of Barinas state, despite widespread reports of electoral irregularities committed by the ruling United Socialist Party of Venezuela (PSUV).

In Brazil, a family of environmentalists — a couple and their teenage daughter — were found dead with gunshot wounds in São Félix do Xingu city, Pará state last week. The family had been working for over 20 years assisting turtle repopulation and forest preservation along the Xingu river (The Guardian, 13 January 2022). Although the perpetrators remain unknown, there is evidence that the attack was motivated by land disputes between farmers and forestry companies (O Globo, 14 January 2022). The Federal Prosecution Office and dozens of civil organizations call for a swift investigation of the case (O Globo, 14 January 2022). Women in politics, including activists, face heightened risk in Brazil, contributing to Brazil being one of the most dangerous places in the world for women in politics (for more on violence targeting women in politics, see this recent ACLED report).

Meanwhile, violence continued unabated in Rio de Janeiro state last week. In Duque de Caxias city, civil police conducted an operation in the Parque das Missões community to arrest members of the Red Command (CV), specifically those who are also social media influencers that showcase their criminal activities on the internet (G1, 14 January 2022). During the operation, civil police killed three suspects, including a close ally of Fernandinho Beira-Mar (real name: Luiz Fernando da Costa), a CV leader currently serving time in a high-security prison. Beira-Mar, one of the most important arms and drug trafficking leaders of Latin America, still manages the CV from inside the prison (G1, 14 January 2022). Additionally, in Niterói city, suspected drug traffickers set a building and seven vehicles belonging to a telecommunications company on fire. The company had recently reported that drug trafficking groups were preventing their workers from accessing the area to carry out maintenance and other technical activities (Globo Extra, 12 January 2021). The retaliatory attacks further expose the levels of control that organized crime groups have in the metropolitan area of Rio de Janeiro and its impact on private and public companies (Globo Extra, 12 January 2021).

Elsewhere in Brazil, fighting between different armed actors continued to be reported last week, including in Mato Grosso state, where eight fatalities were reported. These fatalities stem mainly from clashes between state forces and organized crime groups. In Rondonópolis city, three drug trafficking suspects were killed during an exchange of fire with military police near a criminal detention facility. Police seized mobile phones and drugs from the deceased, which were due to be smuggled into the facility (Gazeta Digital, 8 January 2022). Mato Grosso is a key Brazilian state for transnational crime in South America, as it shares an extensive porous border with drug-producing Bolivia (Insight Crime, 13 October 2020). The recent drug-related events contributed to a 100% spike in violence in Mato Grosso state last week relative to the month prior (see ACLED’s Early Warning Research Hub for more).

In Colombia, increased fighting between state forces and armed groups, coupled with attacks against vulnerable groups, contributed to a 61% spike in violence in the country over the past week compared to the month prior (see ACLED’s Early Warning Research Hub for more). Clashes between state forces and dissident groups of the FARC increased, with fighting reported in Meta, Norte de Santander, and Valle del Cauca. At least two police officers were killed during the clashes.

Meanwhile, a series of attacks against vulnerable groups were reported in the bordering departments of Sucre and Bolivar in the Montes de Maria region. In Coloso city, a woman social leader was shot and killed by unidentified individuals. Women in politics, especially social leaders, face heightened risk in Colombia, contributing to Colombia being the most dangerous place in the world for women in politics, second only to Mexico (for more on violence targeting women in politics, see this recent ACLED report). At the same time, a demobilized former FARC member — who was also a farmer — was found killed on a road in the Chengue rural area. Another four fatalities were reported last week in the area related to targeted killings. These targeted attacks contributed to a 200% spike in violence in Bolivar state last week compared to the month prior (see ACLED’s Early Warning Research Hub for more). The spike in violence comes less than two months before presidential and regional elections scheduled for 13 March, in an area that has been historically affected by violence ahead of elections (El Tiempo, 13 January 2022). Armed groups, such as the dominant Gulf Clan, seek to influence politics in the Montes de Maria region, a strategic location that provides key routes for illegal businesses to Colombia’s Caribbean coast (InSight Crime, 8 September 2020). According to locals, the Gulf Clan has started intimidating the population and meeting with several rural communities to influence voting this year (El Tiempo, 13 January 2022).

Protests against coronavirus restrictions were reported in Bolivia last week for the second consecutive week. On 10 January, several protests took place across the country’s main cities against newly-implemented measures requiring proof of vaccination or a negative COVID test to enter public and private places. In La Paz city, protesters also call for the dismissal of the Minister of Health Jeyson Auza amid claims that he should have carried out a public consultation before implementing the new rules. Protesters claim they will continue with their marches if the government does not withdraw decrees 4640 and 4641, which regulate the restriction measures (Los Tiempos, 13 January 2022). Several protest events against the vaccines and restriction measures were also reported in Argentina, Brazil, Ecuador, and Paraguay.

Finally, in Venezuela, opposition candidate Sergio Garrido was elected the next governor of Barinas state on 9 January, despite widespread reports of electoral irregularities committed by the ruling PSUV (Infobae, 13 January 2022). The victory comes less than two months after the Venezuelan Supreme Court invalidated the results of the 21 November 2021 elections, when opposition member Freddy Superlano defeated a PSUV loyalist. The court had declared Superlano, as well as his wife and another opposition leader chosen to succeed him, ineligible to run for governor in the new elections due to administrative charges (San Diego Union Tribune, 4 December 2021). However, pushback against these measures appears to have resulted in an even higher turnout, ultimately increasing the opposition’s margin of victory by more than 40,000 votes (El Espectador, 12 January 2022). The defeat of the ruling PSUV in Barinas state is particularly significant, as it is the birthplace of Hugo Chavez and has been governed by a member of the Hugo Chavez family since 1998 (El Espectador, 12 January 2022).