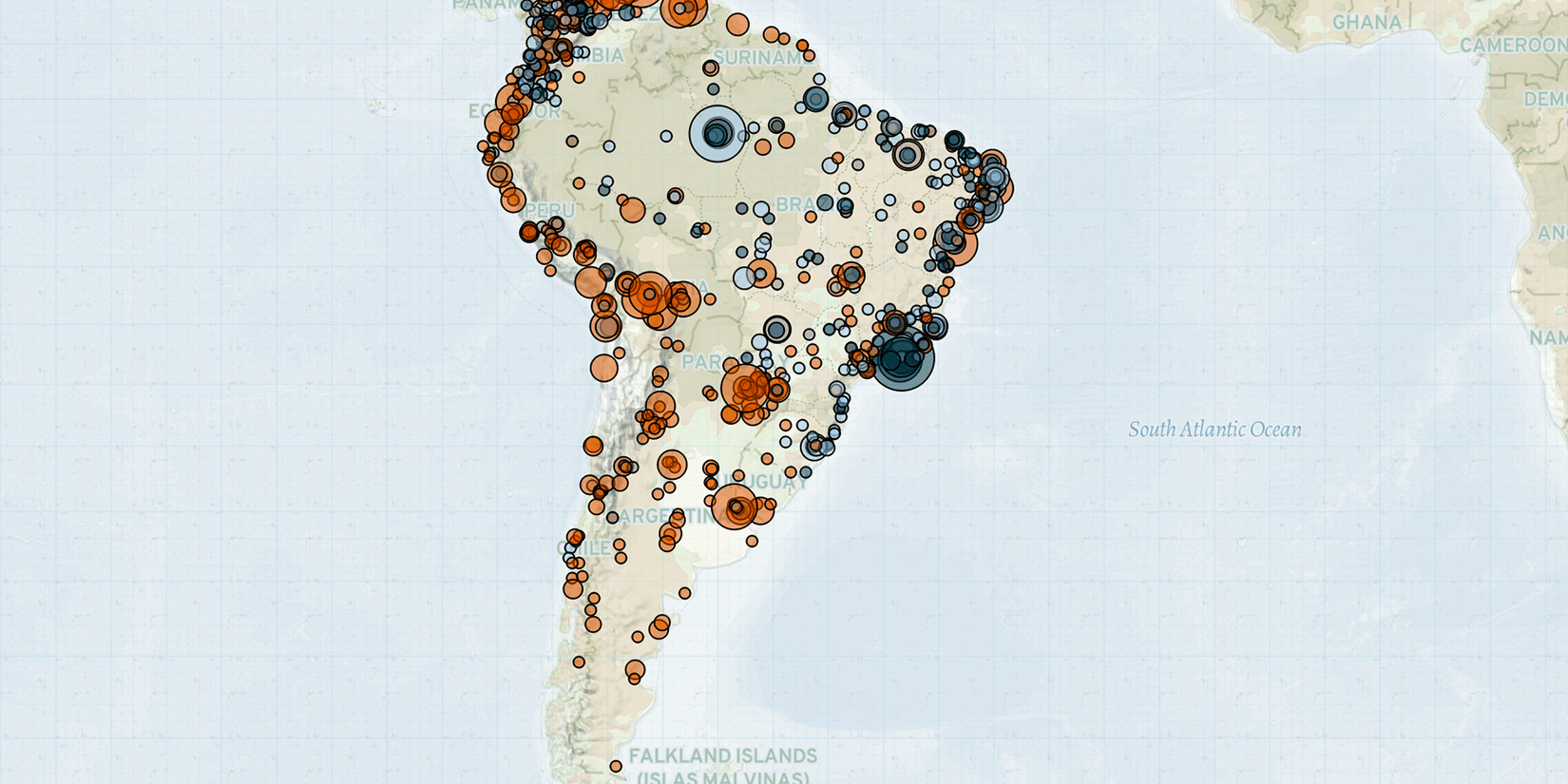 Last week in South America, violence decreased across the region compared to the week prior, while demonstrations slightly increased. In Brazil, violence increased in Rio Grande do Sul state amid a territorial dispute between drug trafficking groups. At the same time, an internal feud inside the First Capital Command (PCC) led to targeted attacks in São Paulo state. In Bolivia, supporters of former interim President Jeanine Añez were attacked by government supporters during a protest. In Colombia, election-related violence continued last week amid an overall increase in violence across the country. Finally, nationwide protests took place in Venezuela, as workers and retirees called for higher wages and pensions.

In Brazil, three men were shot and killed last week in separate attacks in Gravataí city, Rio Grande do Sul state. According to the police, all victims were tortured and killed by drug traffickers in the context of territorial disputes (Correio do Povo, 15 February 2022). The victims had criminal records, and their bodies were found with hands and feet tied, which corroborates authorities’ analysis that the attacks were related (Giro de Gravataí, 19 February 2021). Another three fatalities were reported elsewhere in the state last week, stemming from targeted attacks and armed clashes between drug trafficking groups. These trends contributed to the 146% increase in violence in Rio Grande do Sul last week relative to the past month, flagged by ACLED’s Subnational Surge Tracker, which first warned of increased violence to come in the state in the past month. Rio Grande do Sul state, bordering Argentina and Uruguay, serves as an important drug trafficking route for criminal groups. A landscape of lowlands — known as the Pampas — allows aircrafts loaded with drugs departing from Paraguayan farms to land in the state’s airfields (Correio do Povo, 16 September 2021).

Elsewhere in Brazil, two men were shot and killed in separate events in the state of São Paulo last week. Authorities believe the cases might be linked to several recent executions carried out by the PCC due to internal disputes, although the connection has not yet been confirmed (R7, 12 February 2022; R7, 18 February 2021). The killings follow the execution of two high-ranking leaders of the PCC, Anselmo Bechelli Santa Fausta (alias: Cara Preta or Magrelo) and Antônio Corona Neto (alias: Sem Sangue), by hitmen in the East Zone of São Paulo city on 27 December 2021. According to authorities, Anselmo, who was responsible for coordinating international drug trafficking transactions, was killed after threatening PCC-affiliated businessmen over a failed investment (SBT News, 20 February 2022). So far in 2022, the PCC has killed at least two people involved in the plot, apart from the two deaths last week, which are under investigation (Istoé, 18 February 2022; R7, 24 January 2022). ACLED’s Subnational Surge Tracker first warned of increased violence to come in São Paulo state last month, when the first PCC-related killings were reported.

In Bolivia, supporters of former interim President Áñez called for her release and staged a protest last week outside Miraflores prison in La Paz city, where she is on preventive detention. Supporters of the governing Movement for Socialism (MAS) party arrived at the scene and moved protesters away by force, including the daughter of Añez, who was taking part in the protest. Rioters also destroyed tents that Añez supporters had placed in the area to start a vigil, though no injuries were reported. Añez and other former government officials have been under arrest since March 2021 on charges of “terrorism and sedition” (The Guardian, 14 March 2021). On 10 February, Añez’s trial started online, but was promptly suspended after her defenders requested it be held in person (Al Jazeera, 10 February 2022). The former president could be sentenced to 12 years imprisonment if found guilty on charges of unconstitutionally assuming the presidency in November 2019 (Al Jazeera, 10 February 2022).

Meanwhile, electoral-related violence continued last week in Colombia, ahead of regional elections scheduled for 13 March and presidential elections on 29 May. In Pereira city, Risaralda department, hooded demonstrators threatened presidential candidate Sergio Fajardo, resulting in him leaving the area where he planned to hold a political rally. In Norte de Santander department, armed men intercepted the vehicle of a woman candidate running for a local position in the Special Transitory Circumscriptions of Peace (CTEP, or Curules de Paz). The CTEP are special electoral districts comprising rural areas affected by conflict. They set fire to her campaign propaganda and fled the area in her car. Candidates have expressed concerns about campaigning in conflict-affected areas, particularly in Norte de Santander (La Opinion, 17 February 2022). While women in politics face great risk in Colombia, such targeted violence against women in politics has been more rare in Norte de Santander. While violence in the department has been common, it has become increasingly volatile, resulting in a shift from a place of ‘consistent risk’ to being considered an area of ‘extreme risk’ by ACLED’s Volatility and Predictability Index.

Meanwhile, armed violence involving dissidents of the Revolutionary Armed Forces of Colombia (FARC) and National Liberation Army (ELN) continued along the Venezuelan-Colombian border last week. A recent intelligence report from the Colombian government stated that more than 1,600 Colombian guerrilla fighters, including FARC dissidents and ELN fighters, are believed to be involved in the ongoing conflict on the Venezuelan-Colombian border (El Nacional, 14 February 2022). The groups are present in the Venezuelan states of Apure, Táchira, and Zulia and in the Colombian departments of Arauca and Norte de Santander (El Nacional, 14 February 2022). More than 1,000 fighters belong to either the ELN or its ally, the Second Marquetalia, while 600 belong to the 7th, 10th, 28th, 33rd FARC Dissident fronts under the loose overall command of Miguel Boatche Santanilla (alias: Gentil Duarte) (El Nacional, 14 February 2022). In addition to that, an estimated 3,100 Venezuelan soldiers have been deployed to quell fighting along the border in recent weeks (El Nacional, 14 February 2022). However, rather than putting down the insurgents, locals report the military has been aiding the ELN-Second Marquetalia forces with logistic support in the battle against Gentil Duarte’s FARC Dissident coalition (La Patilla, 13 February 2022). ACLED’s Subnational Surge and Threat Trackers have warned of increased violence to come in most of these Colombian departments and Venezuelan states over the past month.

Meanwhile, electoral violence and ongoing turf wars between guerrilla groups contributed to a 31% increase in violence in Colombia last month relative to the past year flagged by ACLED’s Conflict Change Map, which first warned of increased violence to come in the country in the past month.

Finally, in Venezuela, protest events significantly increased last week compared to the week prior, as nationwide labor protests took place on 15 February. Workers and retirees peacefully protested in 15 of the country’s 23 states to demand higher wages and pensions, without any reports of intervention from law enforcement. The protests spanned across both private and public sectors and included teachers, nurses, and public administration workers. These protests occur against the backdrop of a nearly decade-long economic crisis, spiraling inflation, and repeated currency devaluations that have left over 94% of the population in poverty (El Impulso, 16 February 2022; Caracas Chronicles, 30 September 2021).