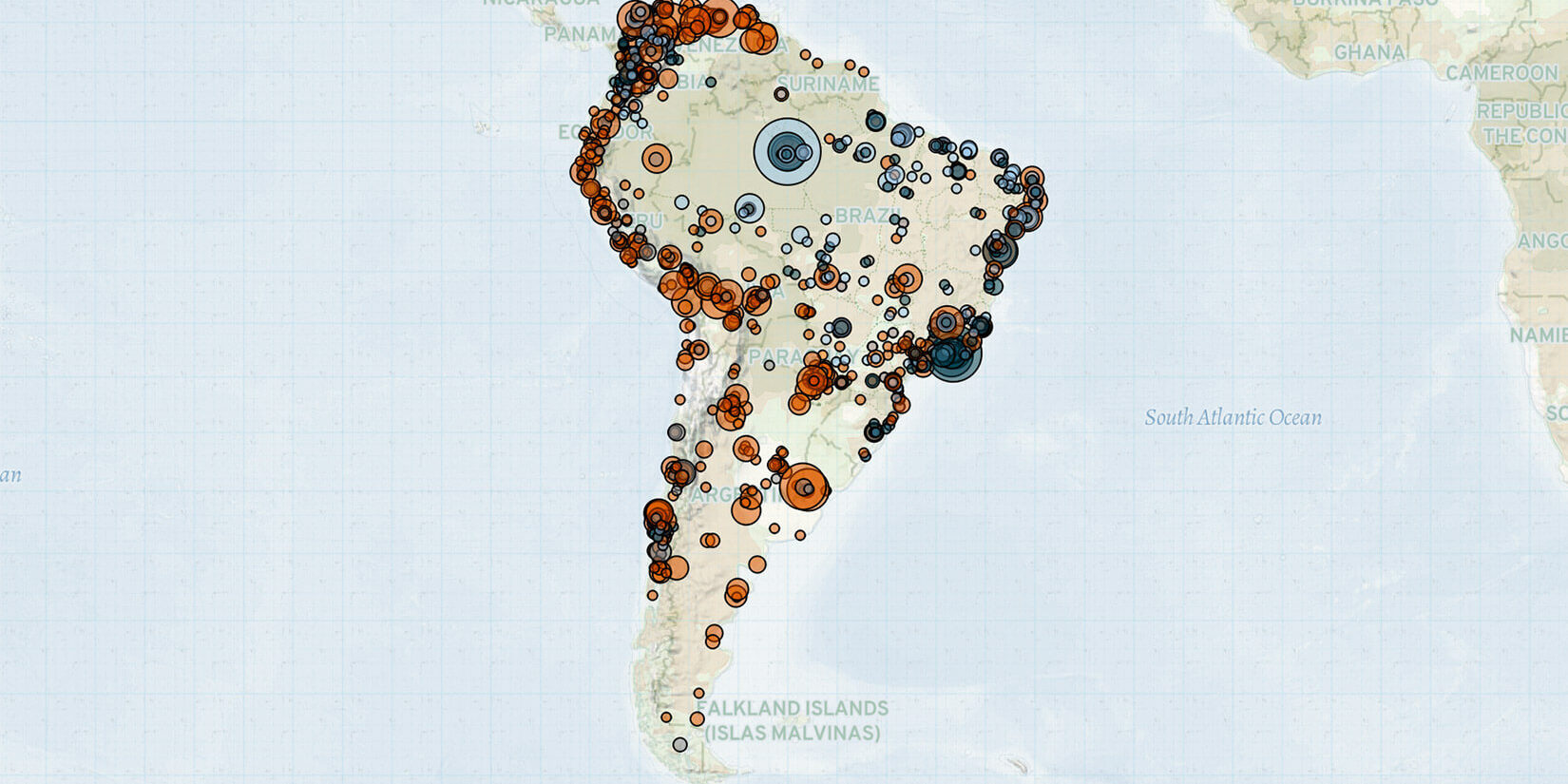 Over the past two weeks in South America, violence slightly increased in the region, while demonstrations fell by almost a quarter compared to the weeks prior. In Colombia, organized political violence increased as the Gulf Clan increased their activity and declared a curfew in several departments in response to the extradition of a cartel leader. Meanwhile, rallies in commemoration of the April 2021 anti-government demonstration movement turned violent in central cities. In Chile, forestry workers and truck drivers took to the streets and blocked highways for two consecutive weeks, demanding better security conditions amid increasing Indigenous militia attacks. In Brazil, violence levels increased in Amazonas state amid ongoing turf wars between drug trafficking groups, while organized crime groups continued to clash with state forces in Rio de Janeiro state. Meanwhile, demonstrations in commemoration of International Workers’ Day on 1 May were reported across South America. Notably, in Brazil and Venezuela, the day was marked by several pro- and anti-government demonstrations.

In Colombia, the Gulf Clan launched a four-day-long ‘armed strike’ on 5 May (paro armado, in Spanish), mainly affecting the departments of Antioquia, Sucre, Bolivar, Córdoba, Chóco, and Magdalena. During the armed strike, the group prohibited all vehicle traffic and the movement of civilians in areas within or close to their territories. The measure comes one day after the Colombian government extradited the top Gulf Clan leader, Dairo Antonio Úsuga (alias: Otoniel), to the United States (Infobae, 4 May 2022). Otoniel, who was arrested in the Antioquia department in October 2021, is wanted in the US on drug trafficking charges (BBC, 24 October 2021). His extradition has been met with criticism from human rights organizations, who claim that his deportation to another country will undermine efforts to obtain reparations for victims of the Colombian conflict (Comisión Intereclesial de Justicia y Paz, 8 April 2022).

At least five civilians were killed in the first two days of the armed strike during targeted attacks. Clashes between the Gulf Clan and state forces were also reported, with one suspect being killed in the Sucre department. Gulf Clan members placed barricades and set vehicles on fire in several locations across the country. Recent Gulf Clan activity contributes to the 208% and 700% increases in violence in Bolívar and Sucre, respectively, last week relative to the past month, flagged by ACLED’s Subnational Surge Tracker. The Subnational Tracker first warned of increased violence to come in both departments in the past month.

Elsewhere in Colombia, demonstrators took to the streets in the main cities to commemorate the first anniversary of the 2021 anti-government demonstration movement on 28 April. Mass demonstrations erupted in April 2021 following the government’s announcement of tax reforms, with the movement later expanding to cover a range of social and economic demands (New York Times, 6 June 2021). During commemoration rallies in the week of the anniversary, clashes between demonstrators and the Mobile Anti-Disturbance Squadron Police Forces (ESMAD) were reported in Bogotá, Medellín, and Popayán cities.

In Chile, forestry workers and truck drivers led nationwide demonstrations against increased insecurity for the past two weeks. Demonstrating workers claim they are heavily exposed to attacks by suspected Indigenous militias in the southern regions. Militias target forestry companies whom they claim occupy their Indigenous territories. In the first week of the strike, workers blocked highways and staged demonstrations across several regions to call for better security on the roads and an exemption to fuel taxes. During the second consecutive week of the strike, demonstrations were concentrated in the Araucanía, Biobío, and Los Rios regions. In Biobío, demonstrators demand that the government declare a state of emergency, which would allow the deployment of state forces to the region to protect them (Biobio Chile, 2 May 2022).

Meanwhile, Indigenous militias continued to lead targeted attacks against forestry companies and their employees. Near Los Alamos village, in the Biobío region, 40 armed men attacked forestry workers and burned their trucks and equipment in Los Rios village. The group then attacked other forestry companies within minutes in nearby locations, with no reported casualties. Responsibility for the attack was later claimed by the Indigenous militia group Mapuche Lavkenche Resistance (RML). Such attacks by Indigenous militias contributed to the 119% increase in violence in Biobío last month relative to the past year flagged by ACLED’s Subnational Threat Tracker. The Subnational Tracker first warned of increased violence to come in Biobío in the past month.

In Brazil, violence continued unabated in Amazonas state. Targeted attacks and clashes between organized crime groups and state forces resulted in at least 35 fatalities in Manaus city during the past two weeks. Between 4 and 5 May, at least seven deaths were reported in less than 24 hours. Violence in Manaus is fueled by prolonged turf wars between drug trafficking groups seeking to gain dominance in the city (Insight Crime, 25 February 2020; CNN, 6 June 2021). Located near the Rio Negro and Amazon rivers intersection, the city serves as an essential point of distribution for drugs produced in Colombia and Peru coming from river routes inside the Amazon forest (A Crítica, 26 December 2020). While violence in Amazonas state has been common, it has become increasingly volatile, resulting in a shift from a place of ‘consistent risk’ to being considered an area of ‘extreme risk’ by ACLED’s Volatility and Risk Predictability Index.

In Rio de Janeiro state, at least 35 deaths were reported over the past two weeks stemming from organized crime-related violence, including clashes between rival groups, and between these groups and state forces, as well as targeted attacks against civilians. In the North Zone of Rio de Janeiro city, members of the Red Command (CV) clashed with military police forces in the Barros Filhos neighborhood, resulting in the deaths of one civilian and four CV members. The clash happened after the CV entered the community, which is controlled by their rival, the Third Pure Command (TCP) (Crimes News RJ, 25 April 2022).

In Venezuela, labor protests were also reported across 19 states and in the Capital District on 26 April. Gathering outside local labor inspector’s offices, protesters demand labor benefits like subsidized food and healthcare. On 1 May, the governing United Socialist Party of Venezuela (PSUV) held International Workers’ Day celebrations in several cities, while opposition politicians and labor unions gathered in counter-protests to criticize the government of Nicolás Maduro. Protesters claim that hyperinflation and the country’s ongoing economic crisis have resulted in most workers living on wages that are inadequate to purchase necessities like food and medicine.

In Brazil, pro- and anti-government protests were also reported during International Workers’ Day commemorations. Encouraged by President Jair Bolsonaro, government supporters call for democracy, freedom, and the defense of the constitution, while also demanding the resignation of the judges of the Supreme Court (STF). Some protesters also called for a military intervention — presenting such a demand is unconstitutional under Brazilian Law (G1, 1 May 2022). Meanwhile, opposition parties and labor unions gathered in at least 16 state capitals to criticize the government’s economic and social plans, such as the dismantling of social policies aimed at vulnerable groups and the weakening of labor rights.