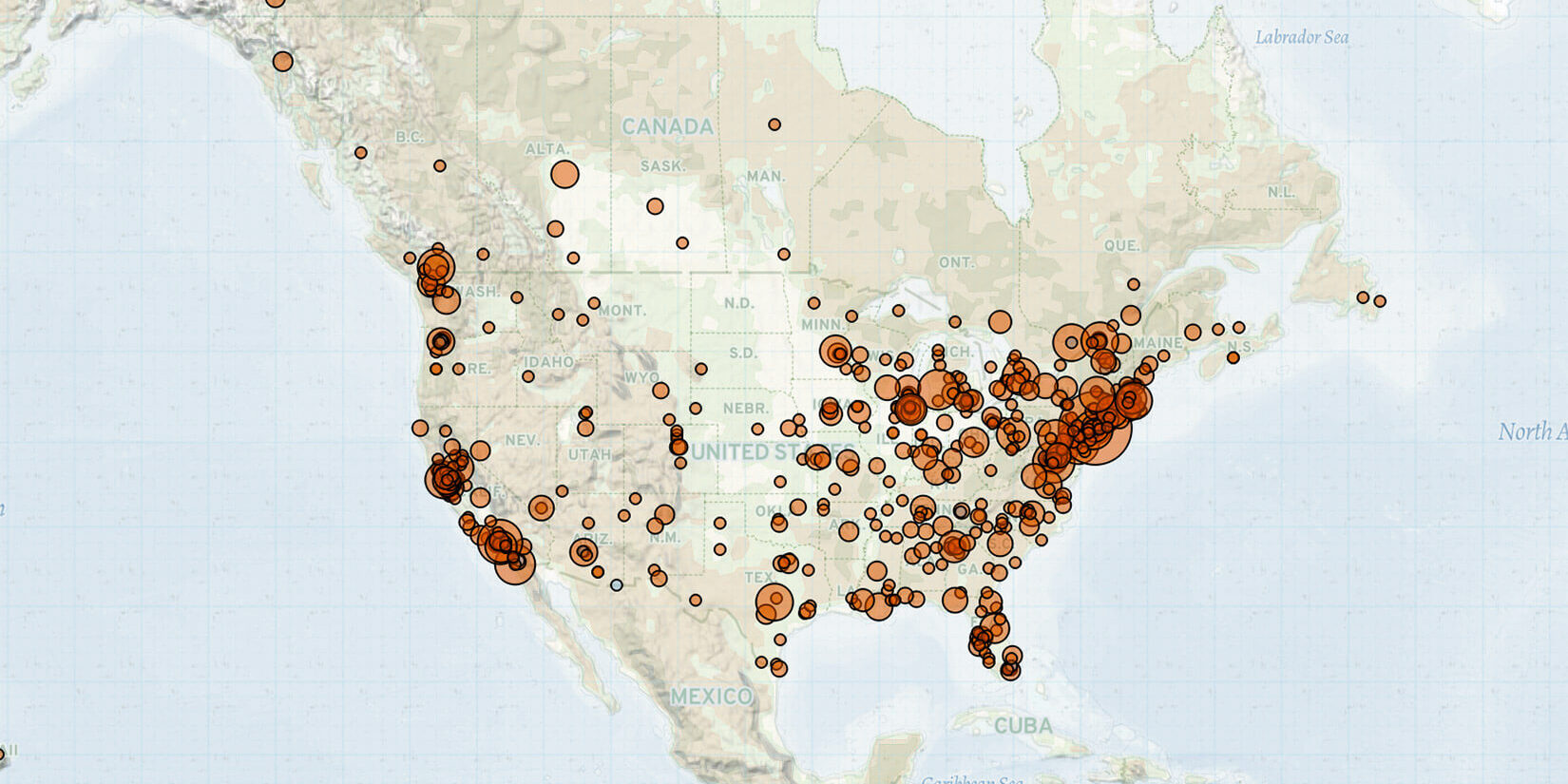 Over the past two weeks, demonstration activity in the United States increased slightly before spiking to its highest levels since the week of the Russian invasion of Ukraine. This is largely attributable to a nationwide wave of demonstrations in support of continued access to legal abortion, following the leak of an initial draft majority opinion written by Supreme Court Justice Samuel Alito. Meanwhile, demonstration levels in Canada saw a significant uptick spurred by demonstrations around Missing and Murdered Indigenous Women (MMIW). Demonstrations led by Indigenous people in both countries increased sharply around 5 May, Red Dress Day, which seeks to commemorate murdered and missing Indigenous women and girls. Far-right militia, militant social movement, and white nationalist activity in the United States, meanwhile, continued at slightly depressed levels over the past two weeks.

In the United States, demonstrations were held across at least 45 states and in Washington, DC, following a Supreme Court leak in the case of Dobbs v. Jackson Women’s Health Organization, indicating the court is poised to overturn Roe v. Wade (Politico, 3 May 2022). This would overturn a guarantee of federal, constitutional protections for access to abortion. As a response to the leaked opinion, demonstrations demanding access to abortion reached their highest levels since the week of the annual Women’s March in October 2021.

On 2 May, an area around the Knoxville Center for Reproductive Health abortion clinic was shut down after an unknown package, suspected to be an explosive device, was placed behind the clinic. After an investigation, police determined that it did not contain a dangerous or explosive item.

Elsewhere, demonstrations calling for Melissa Lucio to be released increased sharply ahead of her scheduled execution in Texas on 27 April. The spike marks the highest number of demonstration events in support of prisoners since the week before Julius Jones was set to be executed in November 2021. Lucio was convicted over the death of her toddler, though her attorneys claim that her child’s death was due to an accident, not neglect (NPR, 22 April 2022). Two days before her execution was set to take place, Lucio was granted a stay of execution by the Texas Court of Criminal Appeals, opening up the possibility that she may be granted a new trial (CNN, 1 May 2022).

Several suspected hate crime incidents, in which people were targeted with violence because of their race or religion, took place over the past two weeks. These trends contribute to the 33% increase in political violence events in the United States last week relative to weekly average for the past month that is flagged by ACLED’s Conflict Change Map. On 23 April, a male student assaulted a group of Black students, calling them racial slurs, in Middlebury, Vermont (WCAX, 29 April 2022). On 2 May, a man set a car on fire in Torrington, Connecticut, over the car owner’s Mormon beliefs; the perpetrator was later arrested on hate crime charges (NBC, 2 May 2022).

Three further violent incidents took place in New York during the past two weeks. On 24 April, a man followed an elderly Asian woman and punched her in Manhattan in an unprovoked attack that is being investigated by the New York Police Department’s (NYPD) Hate Crimes Task Force (New York Post, 24 April 2022). On 1 May, in Queens, a man shot and killed a Chinese immigrant working as a delivery driver in an unprovoked attack, which police suspect is connected to the victim’s ethnicity (New York Times, 1 May 2022). In Brooklyn, on 6 May, a man assaulted a Hasidic Jewish man and abused him with anti-Semitic language, resulting in the Hasidic man’s hospitalization. The NYPD is investigating the attack as a hate crime (CBS News, 7 May 2022). ACLED’s Subnational Surge Tracker first warned of increased violence to come in New York in the past month.

Reported militia and militant social movement activity in the United States continued at somewhat depressed levels over the past two weeks, compared to the weeks prior. On 23 and 24 April, Veterans on Patrol (VOP) carried out patrols along the border with Mexico near Sasabe, Arizona. During the patrols, the group claims they encountered 37 migrants, though it is unclear if they turned them over to US Border Patrol.

Elsewhere in Arizona, on 23 April, the Chino Valley Preparedness Team (CVPT) and Verde Valley Preparedness Team (VVPT) — both Oath Keepers offshoot organizations — held recruitment and public information meetings in Chino Valley and Cottonwood, respectively. Also on 23 April, members of a local militia group, Defend East County, held a demonstration to oppose demonstrators in Lakeside, California, who were calling for accountability in the killing of a Black teenager last month. A white supremacist group, Lakeside Gangsters, is suspected to be associated with the killing (KBPS, 22 April 2022).

In Sarasota, Florida, on 24 April, members of the Proud Boys countered a ‘March for Our Futures’ demonstration. ‘March for Our Futures’ is opposed to recent Florida legislation that restricts: access to abortion; classroom discussions of gender and sexual orientation (i.e. ‘Don’t Say Gay’ legislation); and critical race theory (CRT). Proud Boys, alongside members of the Groyper-affiliated American Populist Union, also countered a demonstration by a group demanding access to abortion in Phoenix, Arizona, on 3 May. Similarly, members of the Proud Boys countered a ‘pro-choice’ demonstration outside the Supreme Court in Washington, DC, on 4 May. The participation of Proud Boys members in counter-demonstrations is not surprising, as confrontation is a foundational principle for the group.

White nationalist groups were also active during the past two weeks. On 23 April, a group of people dropped a banner reading ‘White Lives Matter’ over a Costa Mesa, California overpass. Elsewhere in California, the Goyim Defense League distributed anti-Semitic flyers in Danville on 24 April and Culver City on 2 May. Also on 24 April, flyers promoting the Glory Knights of the Klu Klux Klan — which threatened LGBT+ people, “communists,” “race traitors,” and others — were found in northwest Atlanta, Georgia (CBS46, 25 April 2022). This marks the first reports of activity by the Glory Knights of the Klu Klux Klan since the beginning of 2022. Elsewhere in Georgia, members of the self-proclaimed white nationalist Charles Martel Society participated in a Confederate Memorial Day commemoration on 30 April at Stone Mountain. In Manchester, New Hampshire, members of the neo-Nazi National Socialist Club (NSC) filmed peaceful demonstrators, who were calling for support for migrants, from afar on 1 May. Following the demonstration, NSC members followed one of the event’s organizers by car to an apartment building, where they broke the driver’s side window of the car in which he was sitting.

Categories: Regional Overviews, US Resource12 May 2022