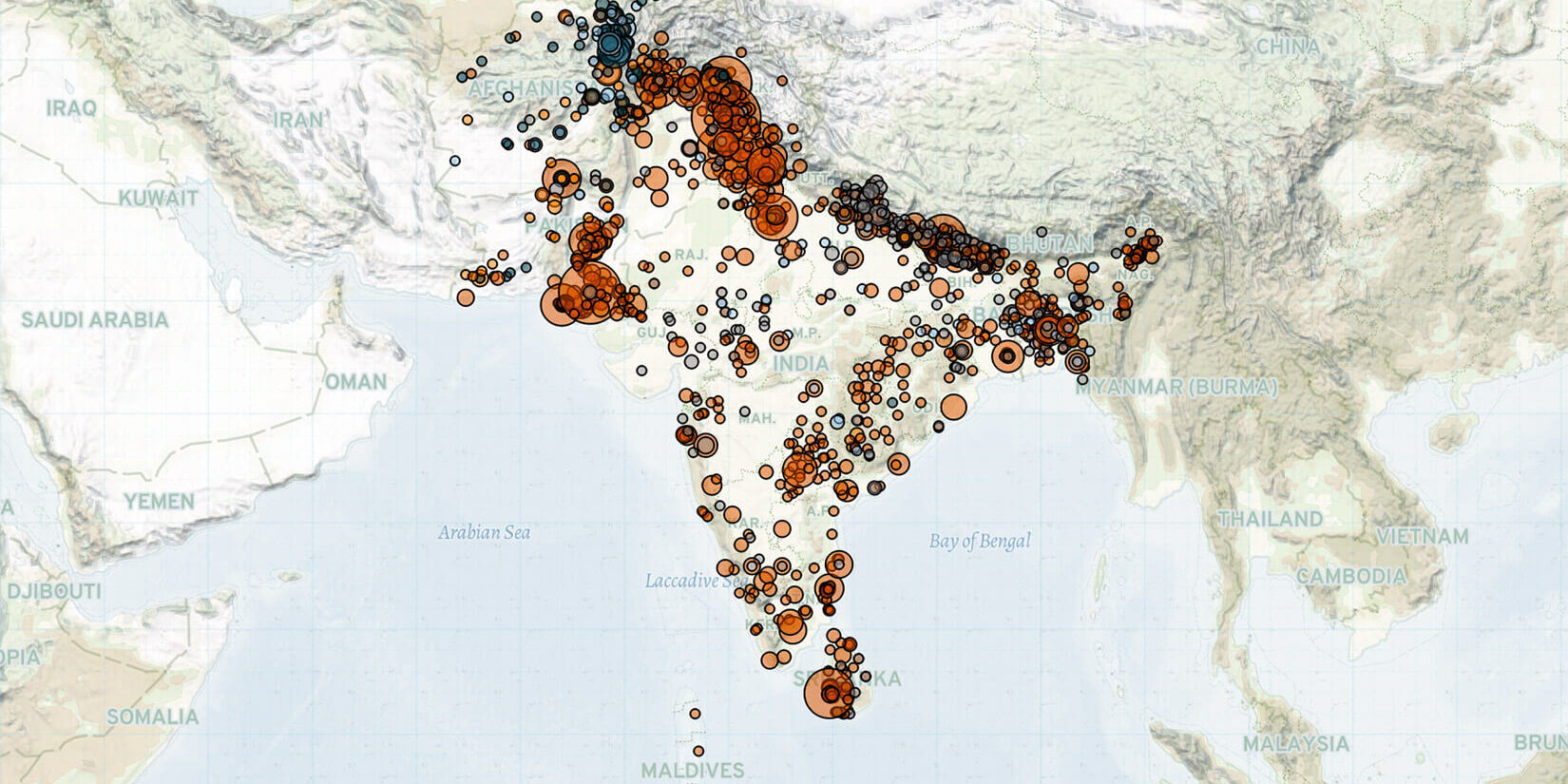 In Afghanistan, the Taliban continued to arrest and reportedly torture civilians across Panjshir province last week, accusing them of cooperating with NRF forces. In Hissa-e-Awal (Khinj) district, 100 people were arrested on 1 June, including minors and the elderly, despite local residents contending that the detained did not have any links to the NRF (Subhe Kabul, 2 June 2022). In Badakhshan province, civilians were also forcibly recruited to fight against the NRF, with the Taliban reportedly torturing those who refused (Hasht e Subh, 1 June 2022). The arrest and reported torture of civilians comes amid ongoing clashes between the Taliban and the NRF, mostly centered in Baghlan and Panjshir provinces. These trends contribute to the 225% increase in violence in Panjshir in the past month relative to the past year flagged by ACLED’s Subnational Threat Tracker. The Subnational Tracker first warned of increased violence to come in Panjshir in the past month.

Other armed groups, including the Afghanistan Liberation Movement, the National Liberation Front of Afghanistan (NLFA), and IS, also continued to target Taliban forces last week. The Afghanistan Liberation Movement claims the killing of eight Taliban members in Qalat district of Zabul, and the NLFA claims attacks in Kandahar and Takhar province. In Kandahar, the NLFA killed a senior Taliban commander during an attack in Zhire district. In Takhar, the group attacked a prison in Taloqan city, freeing two former military officers and killing nine Taliban members. Meanwhile, IS increased its attacks on Taliban forces compared to the week prior, killing at least seven Taliban members in Kabul, Kunar, Kunduz, and Nangarhar.

In Pakistan, separatist and Islamist armed groups continued to clash with state forces and carry out explosive attacks at heightened levels across Khyber Pakhtunkhwa and Balochistan provinces last week. These trends contributed to the 138% increase in violence in Pakistan last week relative to the past month flagged by ACLED’s Conflict Change Map, which first warned of increased violence to come in the country in the past month.

In Khyber Pakhtunkhwa, unidentified militants carried out explosive attacks targeting state forces and civilians last week, resulting in multiple fatalities. In North Waziristan district, militants carried out a suicide bomb attack targeting Pakistani forces. IS and unknown groups also engaged in armed clashes with security forces. While violence in Khyber Pakhtunkhwa has been common, it has become increasingly volatile, resulting in a shift from a place of ‘consistent risk’ to being considered an area of ‘extreme risk’ by ACLED’s Volatility and Risk Predictability Index.

Meanwhile, Tehreek-i-Taliban Pakistan (TTP) announced an indefinite ceasefire with Pakistan state forces on 2 June, following the latest round of peace talks with a delegation of Pakistani tribal elders hosted by the Afghan Taliban (Al Jazeera, 3 June 2022). Confirming the ceasefire agreement, the federal government of Pakistan publicly acknowledged it was negotiating a peace deal with the TTP for the first time (Express Tribune, 3 June 2022).

Elsewhere, in Balochistan province, Baloch separatists increased remote explosive and direct attacks against security forces and civilians last week. Multiple fatalities were reported across separate attacks involving Baloch separatist groups, including the Baloch Liberation Army (BLA), the Baloch Liberation Front (BLF), the Baloch Republican Guard (BRG), and the Baloch Nationalist Army (BNA), in a number of districts. Baloch separatist activity contributed to the 317% increase in violence in Balochistan over the past week relative to the past month, as flagged by ACLED’s Subnational Surge Tracker. Violence in Balochistan is both common and highly volatile; it is considered an area of ‘extreme risk’ by ACLED’s Volatility and Risk Predictability Index.

In India, security forces conducted operations against militant groups in J&K last week amid increasing militant activity. Security forces killed multiple militants across separate clashes involving the Jaish-e-Mohammad (JeM), the Hizb-ul-Mujahideen (HM), and the Lashkar-e-Taiba (LeT). Meanwhile, militants continued attacks against civilian targets, killing at least four people, including a member of the Kashmiri Pandit community. A spate of targeted killings of Kashmiri Pandits has led hundreds of Pandits to depart the Kashmir valley for Jammu region in recent weeks (Al Jazeera, 2 June 2022). These trends contribute to the 100% increase in violence in J&K over the past week relative to the past month, as flagged by ACLED’s Subnational Surge Tracker.

Meanwhile, at least 12 people were injured during communal clashes between members of Muslim and Hindu communities in Kanpur district of Uttar Pradesh state last week. The clash broke out during a demonstration by members of the Muslim community over a remark insulting the Prophet Muhammad by a local Bharatiya Janata Party (BJP) leader during a TV debate.

Elsewhere, in Punjab state, unknown assailants shot and killed a Congress leader and a singer in Mansa district last week. This attack contributed to the 100% increase in violence in Punjab over the past week relative to the past month, as flagged by ACLED’s Subnational Surge Tracker.

In Sri Lanka, anti-government demonstrations over the country’s worst economic crisis continued last week, although at a lower level compared to the week prior. In Colombo, police used tear gas and water cannons to disperse thousands of demonstrators who attempted to storm President Gotabaya Rajapaksa’s official residence while marking 50 days of their continuous demonstration against the government. Meanwhile, President Rajapaksa vowed to finish the remaining two years of his term despite months-long street demonstrations calling for his ouster (Al Jazeera, 7 June 2022). Sri Lanka has been facing one of its worst economic crises in recent decades, with a deteriorating currency, regular power cuts, and acute shortages in fuel, pharmaceuticals, and cooking gas (Newsfirst, 14 March 2022).

In Bangladesh, clashes involving AL and BNP supporters continued across several divisions last week, contributing to the 26% increase in violence in Bangladesh last week relative to the past month flagged by ACLED’s Conflict Change Map. In Barisal division, at least 20 people were injured when members of AL’s student wing – the Bangladesh Chhatra League (BCL) – clashed with BNP members during events commemorating the death anniversary of former Bangladeshi President and BNP founder Ziaur Rahman on 30 May. These trends contribute to the 140% increase in violence in Barisal over the past week relative to the past month, as flagged by ACLED’s Subnational Surge Tracker.