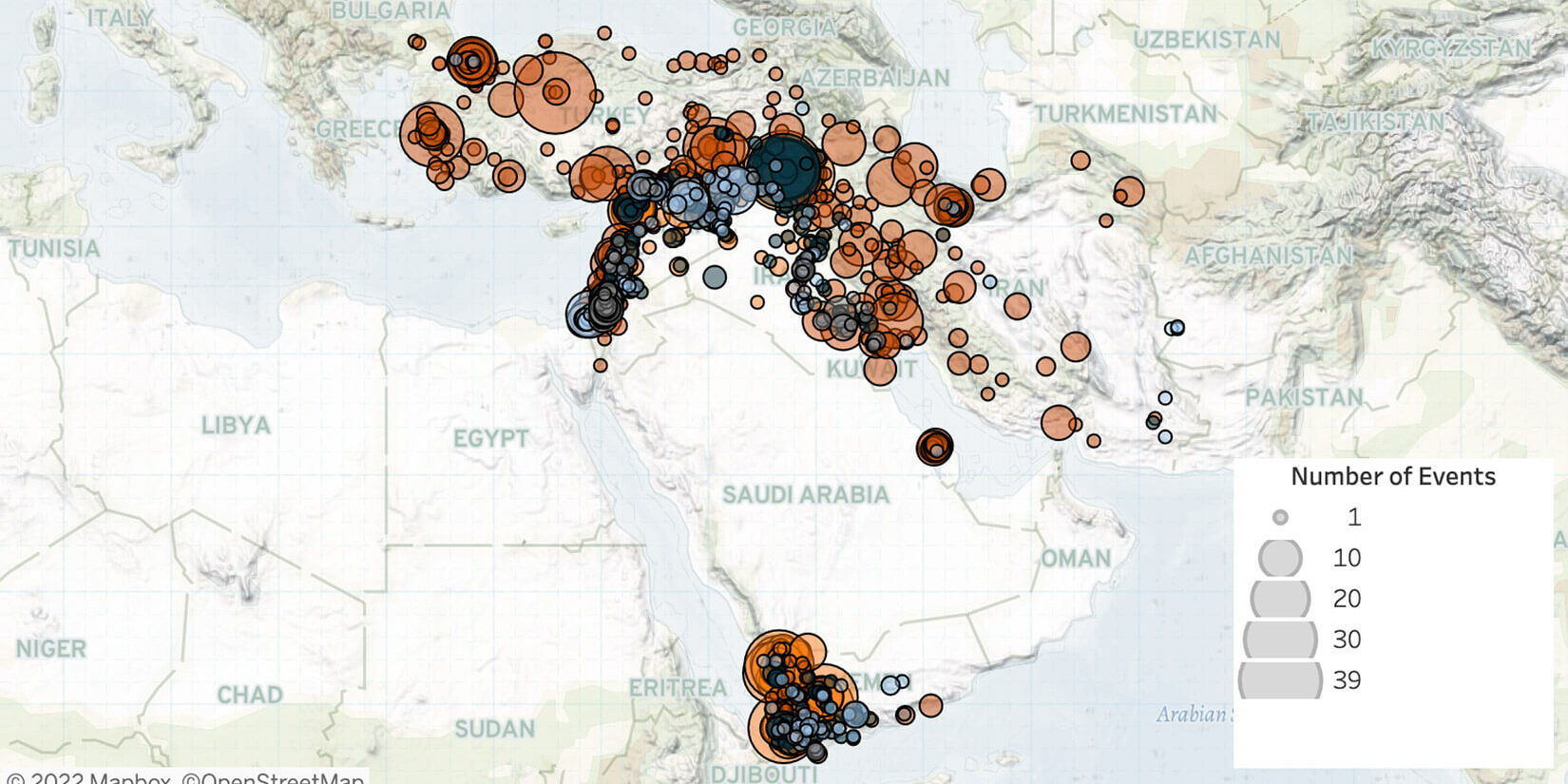 Last week in the Middle East, overall political violence levels remained stable in Yemen for the second consecutive week, while there were unconfirmed reports of a Houthi aerial attack on Saudi Arabia. In Syria, a Hurras al Deen leader was killed in a Global Coalition forces drone attack. In Iraq, violence targeting civilians increased. In Palestine, a Palestinian militant was killed by Israeli forces during a clash in Jenin city, while Israeli forces clashed with Palestinian gunmen and rioters at a shrine in Nablus. In Turkey, Turkish soldiers and Kurdistan Workers’ Party (PKK) members were killed during clashes in Hakkari and Siirt provinces. In Israel, the Knesset voted to dissolve the current Israeli government.

In Yemen, violence levels remained stable last week, with most truce-related violence taking place in the governorates of Ad Dali, Marib, Sadah, and Taizz. For the first time since the beginning of the truce, more truce-related violence was recorded in Ad Dali than in Hodeidah governorate. This was the result of both a 103% increase in violence in Ad Dali over the past month relative to the past year, as flagged by ACLED’s Subnational Threat Tracker, as well as a decrease in political violence in Hodeidah over the past few weeks (see ACLED’s Yemen Truce Monitor for more on truce violations).

Meanwhile, no Saudi-led coalition air raids from fighter jets were reported for the 13th consecutive week last week. However, after a hiatus of 13 consecutive weeks, last week saw the first reports of a Houthi aerial attack on Saudi Arabia since 25 March 2022. The exact nature of the incident remains unclear, as neither the Houthis nor Saudi authorities issued communications about it, although an explosion was filmed over Khamis Mushait and air traffic around Abha airport was diverted (Twitter @no_itsmyturn, 30 June 2022).

In southern Yemen, demonstrations against the deterioration of services subsided last week after erupting in a number of governorates the week prior, although demonstrations against power outages continued in Hadramawt. Meanwhile, in Aden, the convoy of prominent southern commander Saleh Al Sayed, head of Lahij Security, was targeted by a vehicle-borne IED of unknown origin. Al Sayed survived the attack but four of his companions were killed. These developments contributed to increases in violence of 300% and 100% in Hadramawt and Aden, respectively, over the past week relative to the past month flagged by ACLED’s Subnational Threat Tracker. The Tracker first warned of increased violence to come the week prior.

In Iraq, violence targeting civilians increased significantly last week. The increase was driven by a spike in attacks in Baghdad city and Ninewa province, where unidentified militants attacked Yazidi civilians, killing two, and Islamic State (IS) militants executed a farmer. This came as overall IS activity increased, with hit-and-run attacks targeting the Iraqi police and army in Diyala and Babil provinces. This violence contributed to the 63% increase in violence in Iraq in the past month relative to the past year flagged by ACLED’s Conflict Change Map, which first warned of increased violence to come in the country in the past month.

Elsewhere, fighting between Turkish forces and the PKK continued to decline for a second consecutive week last week, particularly Turkish airstrike events,1Note that one airstrike event can include several airstrikes and that the number of airstrikes can greatly vary from one event to another. As ACLED is an event-based dataset, ACLED records airstrike events rather than airstrikes. This ensures consistency in the data, especially given the overall rare reporting on exact airstrike counts. which decreased by a quarter compared to the week prior. Despite the continued decrease, dozens of fighters were killed during clashes between Turkish forces and the PKK.

In Turkey, five Turkish soldiers and four PKK militants were killed last week in separate clashes in southeast Turkey. Three Turkish soldiers were killed in a clash with PKK militants in Cukurca district in Hakkari province. In a separate clash, four PKK fighters were killed by Turkish forces in Kirikdag village in the same province. Meanwhile, two Village Guards were killed in a clash between different factions of the Guards in Dugunculer village in Siirt province, reportedly over a land dispute (Rudaw, 25 June 2022). These trends contribute to the 54% increase in violence in Turkey over the past week relative to the past month that is flagged by ACLED’s Conflict Change Map.

In Palestine last week, a Palestinian militant was killed in Jenin and Israeli forces clashed with Palestinians at the Shrine of Joseph in Nablus in the West Bank. On 29 June, a member of the Palestinian Islamic Jihad (PIJ) was killed during a clash between Palestinian gunmen and Israeli forces in Jenin city that erupted after Israeli forces raided the city. Meanwhile, Israeli forces clashed with Palestinian gunmen and rioters at the shrine of the Prophet Joseph,2The shrine is also considered a holy site by some Palestinian Muslims, who believe it to be the shrine of a shaykh sharing the same name with the biblical figure (Times of Israel, 11 April 2022). as the forces escorted Jewish settlers visiting the shrine. Dozens of Palestinians, one settler, and one Israeli commander were injured. Israeli worshippers are allowed to visit the tomb several times a year provided they are accompanied by Israeli soldiers in coordination with Palestinian authorties (Haaretz, 11 April 2022). ACLED’s Conflict Change Map first warned of increased violence to come in Palestine in the past month.