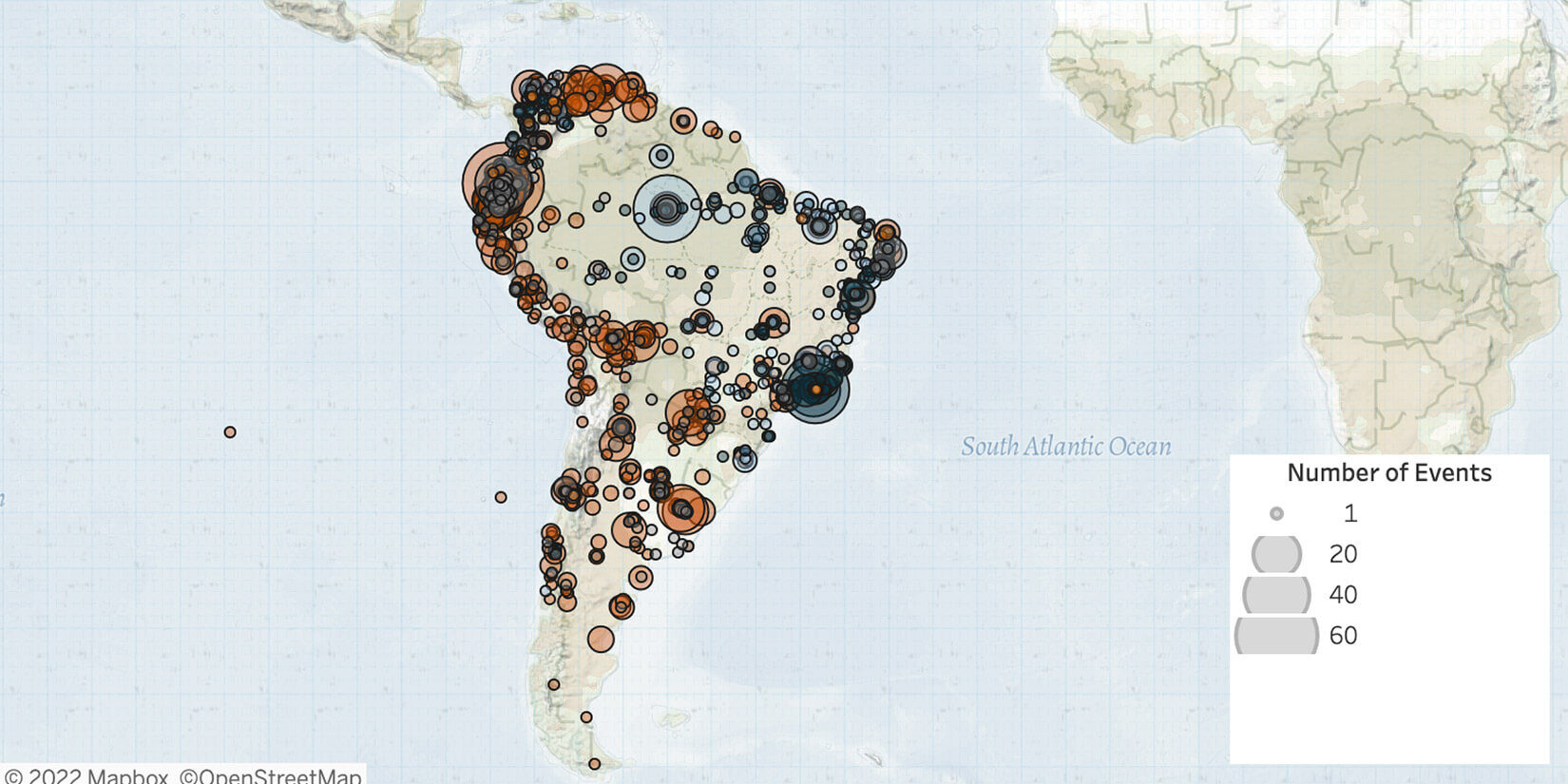 Last week in South America, several explosive attacks were perpetrated by the Gulf Clan in northwest Colombia. In Brazil, a civil and military police raid left at least 18 people dead in the North Zone of Rio de Janeiro city. Meanwhile, two politicians were attacked by unidentified armed men in separate events in the country’s northeast, while violence continued at high levels in the northern Acre state. In Chile, Indigenous militias carried out an arson attack in the Los Ríos region, while Mapuche militias clashed with police forces in the Araucanía and Biobío regions. Finally, truck drivers resumed demonstrations in Peru and joined farmers in blocking highways over fuel price reductions and other demands.

In Colombia, several explosive attacks were perpetrated by the Gulf Clan in the northwest of the country last week. In the Antioquia department, two police officers were killed when armed individuals threw a grenade and opened fire at them in Bello municipality, located in the metropolitan area of Medellín. According to local authorities, the Gulf Clan had hired members of the Pachelly criminal organization to perpetrate the attack (El Tiempo, 18 July 2022). In Canasgordas municipality, an explosive device planted by the Gulf Clan detonated in a rural area, killing one police officer and a civilian, and injuring four officers. These trends contribute to the 150% increase in violence in Antioquia in the past month relative to the past year flagged by ACLED’s Subnational Threat Tracker. The Subnational Tracker first warned of increased violence to come in Antioquia in the past month.

Meanwhile, in Sucre department, suspected members of the Gulf Clan injured seven civilians in a grenade attack against a police station in the capital, Sincelejo. The attack comes as authorities claim that the leaders of the Gulf Clan are offering around 5 million Colombian pesos (1,122 USD) to members of groups that kill police officials as part of their Pistol Plan (Plan Pistola, in Spanish) (Blu Radio, 18 July 2022). Recent violent events carried out by the Gulf Clan contributed to the 31% increase in violence in Colombia last week relative to the past month flagged by ACLED’s Conflict Change Map, which first warned of increased violence to come in the country in the past month.

In Brazil, in the North Zone of Rio de Janeiro city, a civil and military police raid in the Alemão Complex community left numerous people dead. According to locals, more than 20 people were killed in the raid, while state forces confirmed 18 deaths (Crime News, 21 July 2022). While the operation targeted criminal groups involved in cargo theft and bank robberies, at least two civilians were killed during the shoot-out (G1, 21 July 2022). This is the second deadliest single event recorded by ACLED in Brazil in 2022, and it is the fifth most lethal police operation in the history of Rio de Janeiro state (Folha de São Paulo, 22 July 2022).

Elsewhere in Brazil, two attacks against politicians were reported last week. In Bahia state, an alternate city councilor was shot more than 30 times and killed by unidentified gunmen in Ipirá municipality. In Pernambuco state, unidentified armed individuals opened fire against the car of a Paulista city councilor, though the councilor was not injured in the attack. In Brazil, politicians have often been targeted by armed groups in the lead-up to elections (for example, see ACLED’s report on Municipal Candidates Under Attack in Brazil). With general elections due to take place in Brazil in October 2022, it is likely they will also face a heightened risk of attacks in the coming months.

In Acre state, violence continued unabated last week, with at least 12 deaths stemming from organized crime-related violence, including clashes between criminal groups and state forces, and targeted attacks against civilians. These trends contribute to the 140% increase in violence in the state over the past week relative to the past month, as flagged by ACLED’s Subnational Threat Tracker.

In Chile, arson attacks perpetrated by Indigenous militias continued to take place in the country’s south last week, notably in the usually less affected Los Ríos region. In Los Ríos, a group of 17 hooded men stormed a forestry site in Mafil and burned forestry machinery and vehicles. At the site of the attack, firefighters found a banner in which the country’s most significant Indigenous militia group, the Coordination Arauco Malleco (CAM), claims responsibility for the event. Unlike in the Araucanía and Biobío regions, Los Ríos does not have any of its provinces included in a State of Exception, which allows for the deployment of troops in areas affected by Indigenous militia attacks (República de Chile – Senado, 13 July 2022). Meanwhile, in the Araucanía and Biobío regions, at least two separate armed clashes occurred between Mapuche Indigenous militias and police forces, with no casualties reported. The militia group Mapuche Pehuenche Resistance (RMP) claims responsibility for one of the events.

Finally, in Peru, transportation drivers resumed demonstrations across the country last week following a break in demonstrations the week prior. Together with farmers’ unions, they called for a nationwide strike to demand government controls on fuel prices and the distribution of chemical supplies and fertilizers. Demonstrators blocked highways in several departments for four consecutive days, with most events recorded in the populous Piúra department. The strike was suspended after negotiations with the government led to the establishment of, among other things, the Fuel Price Stabilization Fund, which intends to reduce the high volatility of crude oil prices (La Republica, 22 July 2022).