UPDATE | Fact Sheet: Anti-LGBT+ Mobilization on the Rise in the United States

This is an update to a fact sheet published in June 2022 covering the initial escalation of anti-LGBT+ activity going into Pride Month. ACLED is a living dataset, so figures are subject to change as more or better information becomes available.

Amid a wave of legislation and violent rhetoric targeting the LGBT+ community in the lead-up to the midterm elections (Bloomberg, 21 November 2022), anti-LGBT+ activity has surged around the United States, culminating most recently in a deadly shooting at an LGBT+ club in Colorado that is under investigation as a hate crime.2The suspect has not been formally charged and the motive remains under investigation, but “preliminary charges include five counts of first-degree murder and five counts of a bias-motivated crime – elsewhere called a hate crime – causing bodily injury” (CNN, 23 November 2022). Anti-LGBT+ incidents captured by ACLED — including demonstrations, acts of political violence, and the distribution of offline propaganda3ACLED only collects data on physical activity; non-physical threats, harassment, or intimidation incidents that do not escalate into physical violence, or occur outside of physical demonstrations or propaganda events, are not captured. “Demonstrations” include peaceful and violent protests;” political violence” includes acts of sexual violence, non-sexual attacks, and mob violence; and “offline propaganda distribution” includes activities like flyering and banner drops. Other datasets with different catchments and methodologies may arrive at different figures. Please see the ACLED Codebook and Resource Library for more information about ACLED’s catchment and event type definitions. — have more than tripled from 64 events in 2021 to 193 events in 2022 as of mid-November4Data analyzed here cover the period of 1 January 2020 to 18 November 2022. ACLED’s United States dataset is updated every Monday, through the most recent Friday. (see graph below).5The graph includes data from January 2020 through October 2022; though publicly available, data from 1-18 November 2022 are not included, as the graph depicts event counts by full month, so a partial month’s coverage would skew graphic trends. 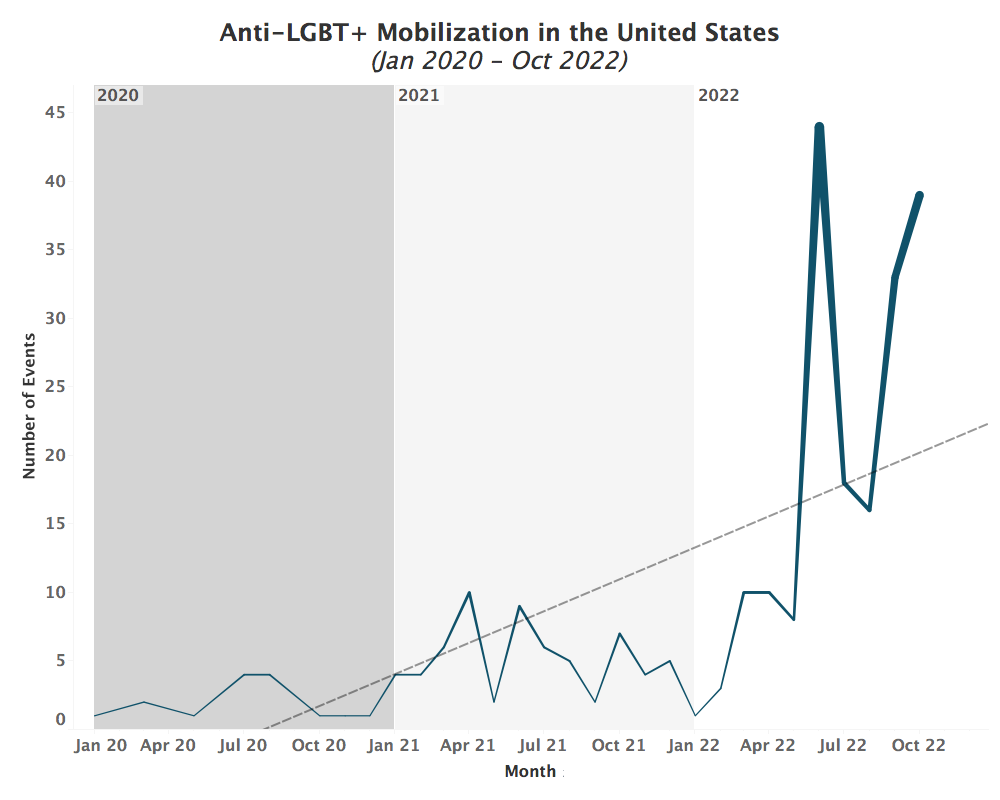 Research shows that members of the LGBT+ community face higher risks of interpersonal violence and violent crime relative to the non-LGBT+ population (Human Rights Campaign, 25 June 2020; UCLA Williams Institute, 2 October 2020), and ACLED data indicate that the LGBT+ community is also at heightened risk of political violence, defined as serious physical manifestations of violence that are reported to be politically rather than interpersonally motivated.6The ACLED dataset is not a crime dataset. While some hate crimes may be included in the dataset, not all hate crimes will meet ACLED’s threshold for serious acts of physical, political violence. Other datasets with different methodologies may arrive at different figures. Please see the ACLED Codebook and Resource Library for more information. This subset includes attacks by spontaneous, violent mobs; law enforcement; and/or or extremist individuals or groups.7As indicated above, it is important to note that political violence only represents a small subset of the many types of violence faced by the LGBT+ community.

As right-wing politicians and media outlets have increasingly mainstreamed the use of anti-LGBT+ hate speech in the United States (Washington Post, 21 November 2022; Media Matters, 21 November 2022), anti-LGBT+ political violence has escalated: incidents of political violence targeting the LGBT+ community this year have already more than tripled compared to the total number of attacks recorded last year, with at least 22 reported events.

Demonstration activity accounts for the majority — 74% — of anti-LGBT+ mobilization this year, with over twice as many anti-LGBT+ demonstrations reported so far compared to last year (142 demonstrations in 2022, up from 56 in 2021), which itself saw an increase of over nine times compared to the previous year (six demonstrations reported in 2020). Most of this year’s demonstrations have taken place in California (22 events), Texas (17 events), Florida (nine events), and Pennsylvania, North Carolina, New York, and Illinois (seven events each).8Since 2020, most anti-LGBT+ demonstrations have taken place in California (33 events), Texas (24 events), Florida (15 events), Oregon (11 events), and Pennsylvania (10 events). This tally does not include pro-LGBT+ events that were canceled or delayed and not yet held as a result of threats of counter-demonstrations or violence from anti-LGBT+ extremists (TIME, 16 June 2022).9Protests or rallies that got underway but were disrupted are coded as “demonstrations” in the ACLED dataset; other types of events that were disrupted or delayed may be coded as “strategic developments.” Note that events reported after 18 November 2022 that meet our inclusion criteria will be included in future updates to the dataset. Please see the ACLED Codebook and Resource Library for more information about ACLED’s catchment and event type definitions.

While coordinated organizing against the LGBT+ community has not been a primary driver of far-right militia and militant social movement activity in recent years, this pattern has changed significantly in 2022 (see graph below).10The graph shows monthly data, but it depicts proportional representation rather than total event counts, so graphic trends are not skewed by the inclusion of a half month’s data for November 2022. Far-right militias and militant social movements like the Proud Boys and Patriot Front have increased their engagement in anti-LGBT+ demonstrations by over three times this year, from 16 events in 2021 to 52 events as of mid-November 2022. This is a dangerous trend: demonstrations are over four times more likely to turn violent and/or destructive when far-right militias or militant social movements are involved. 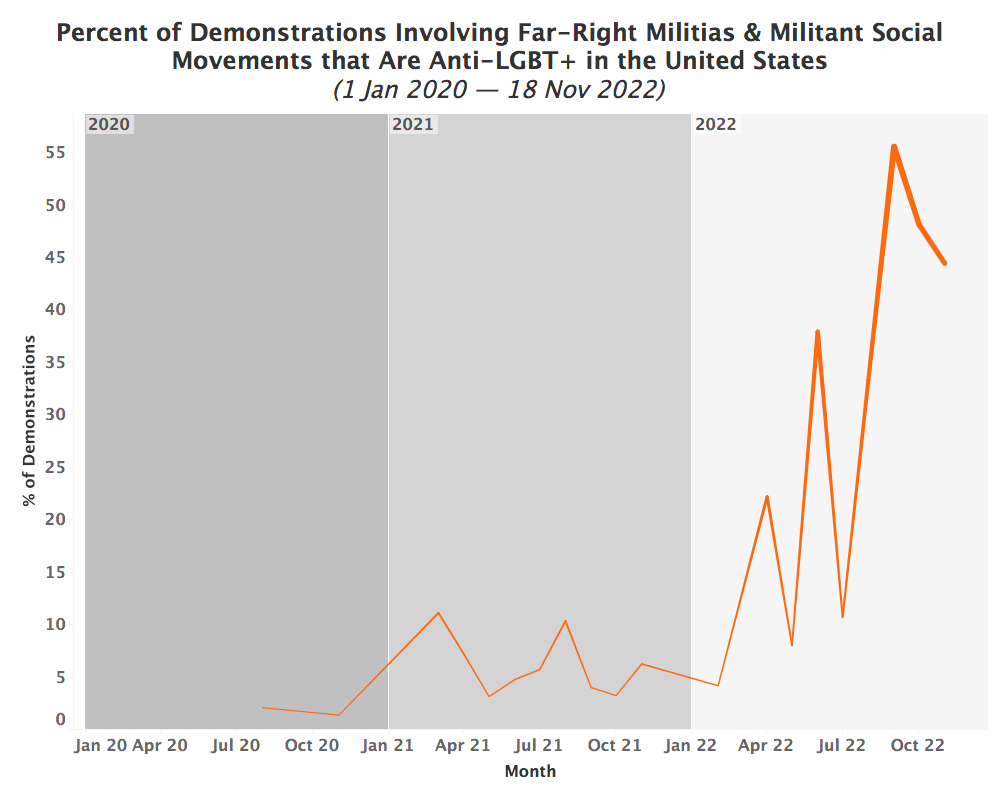 This graph displays the percentage of activity per month (including partial data for November 2022).