The current Ukraine crisis poses a unique threat to international security — from the potentially devastating human costs and the involvement of a major nuclear power, to the significant geopolitical and economic ramifications the war could entail for the entire world. To help track these trends as they develop, ACLED has created this dedicated Research Hub to provide near real-time information on the conflict, including a curated data file, interactive data visualization tools, and weekly analysis of violence patterns in Ukraine, Russia, and the broader region.

As the war in Ukraine intensifies, it is equally important to continue monitoring other flashpoints around the world – including for potential knock-on effects from the crisis in Europe. Check our special report on 10 additional conflicts to worry about in 2022, download the latest global data, and keep track of emerging threats with our Early Warning Research Hub.

What can you do with this Research Hub?

This hub aims to provide near real-time data for use by media, analysts, policymakers, and the public to monitor key conflict developments. It will be updated once a week, on Tuesdays, with data covering events from the previous Saturday through Friday. The data will reflect the best available information at the time of release. Following publication, we will continue monitoring the details of all events and will update the data accordingly as new or better information becomes available (with updates published on a weekly basis).

What can't you do with this Research Hub?

This hub does not aim to provide daily updates on events, and it will not be providing a weekly fatality count on the interactive dashboard. Misinformation and disinformation is being disseminated widely in this crisis, and fatalities confirmed by reputable sources will be included in the event data, but the situation remains extremely fluid and even these totals are subject to rapid change throughout an active conflict. Further, we will not engage in speculation on actor strategy or short- and long-term motives or intentions, as this conflict and the sides involved are likely to shift and adapt over time.

This file contains all political violence events, demonstration events, and strategic developments recorded in Ukraine and the Black Sea from the beginning of ACLED coverage in 2018 to the present.

For an overview, see our interactive dashboard. 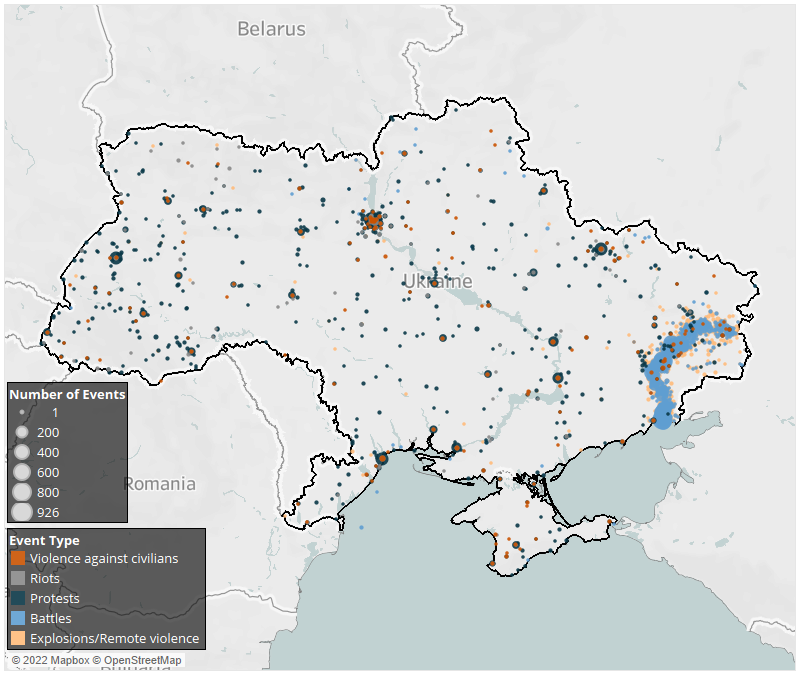 Russian forces continued offensive operations in the Donetsk region last week, capturing several settlements in the area of Bakhmut. In the Luhansk region, daily fighting remained concentrated in the Kreminna area and Svatove, without territorial gains by either side. Increased fighting was also recorded in the Zaporizhia region, where Russian forces intensified ground attacks towards Orikhiv and Huliaipole.

Russian forces continued to target civilian infrastructure with shelling and missile strikes, reportedly killing at least 70 civilians in the Dnipropetrovsk, Donetsk, Kherson, Mykolaiv, and Zaporizhia regions. Among them, over 40 civilians were reportedly killed, and at least 80 were wounded, when a Russian missile partially destroyed a multi-story residential building in Dnipro on 14 January.1Deutsche Welle, 19 January 2023

For those wishing to engage with the data on a set platform, we have designed an interactive dashboard mapping both the lead up to and aftermath of the invasion of Ukraine as well as the civilian toll of the conflict; events related to the current Ukraine crisis are highlighted specifically.

Prior to the Russian invasion of Ukraine (1 January 2018 to 23 February 2022), this includes all events involving: the United Armed Forces of Novorossiya (NAF); the Donbass People’s Militia; the government of the Donetsk People’s Republic; the police of the Donetsk People’s Republic; the Luhansk People’s Militia; the government of the Luhansk People’s Republic; the government of Russia; the military forces of Russia, including any sub-unit, such as the Special Forces; the police forces of Russia, including any sub-unit; the State Border Guard Service of the police forces of Ukraine; and the military forces of Ukraine, including any sub-unit. It also includes all events taking place in Donetsk or Luhansk involving unidentified armed groups and/or civilians, as well as all events occurring in the Black Sea, as these largely involve troop movements and posturing by Russian forces. For awareness and analysis, all strategic developments occurring in Donetsk, Luhansk, Crimea, and the Black Sea involving one of the named actors above are also included (for more on strategic developments and how to use them, see this methodology note). These events are depicted on the left-hand side of the dashboard.

These assumptions help to capture all violence occurring in the Donbas region related to the build up of tensions over the years, and the impact of ceasefires on conflict patterns (the latter can be seen via an interactive graph capturing trends in violence over time). Remaining violence in Ukraine that has taken place outside of this conflict pre-invasion is not visualized on the dashboard; all previous information collected on political violence and demonstrations in Ukraine since 1 January 2018 – some of which may not be directly related to the current crisis – is available for download via the curated data file above.

Furthermore, in order to monitor the conflict’s impact on civilians, the dashboard also includes a panel that focuses on tracking violence targeting civilians in the aftermath of the invasion in particular. Please note that this includes only direct civilian targeting. It does not include events in which civilians may have been impacted as collateral damage. As such, this represents an underestimate of the conflict’s impact on civilians.

This dashboard is not optimised for mobile browsers, please use a desktop or tablet to view.

Analysis of conflict and protest trends since the start of the Russian invasion, including weekly situation updates. Check below for more background and regional context. 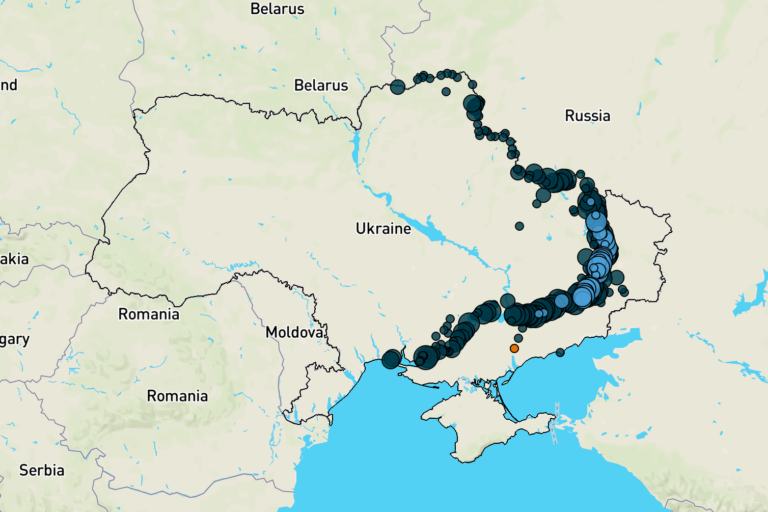 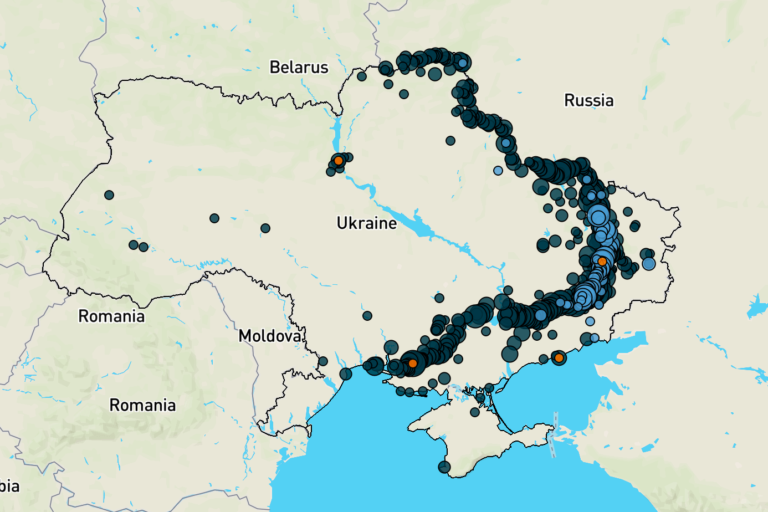 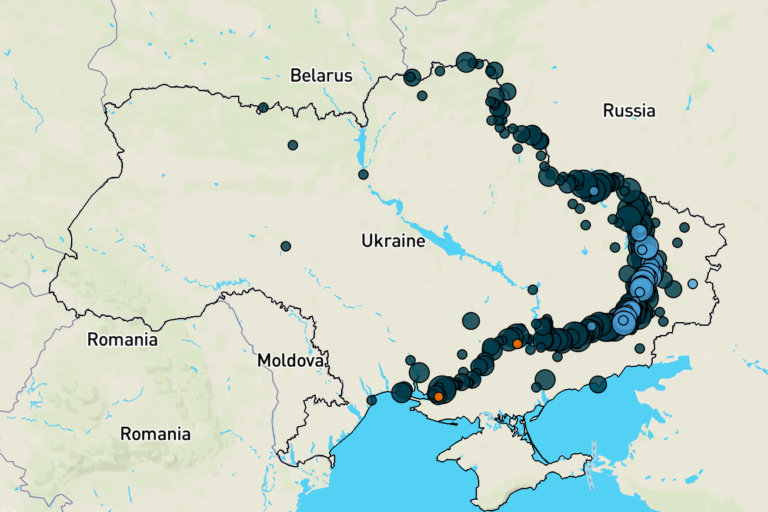 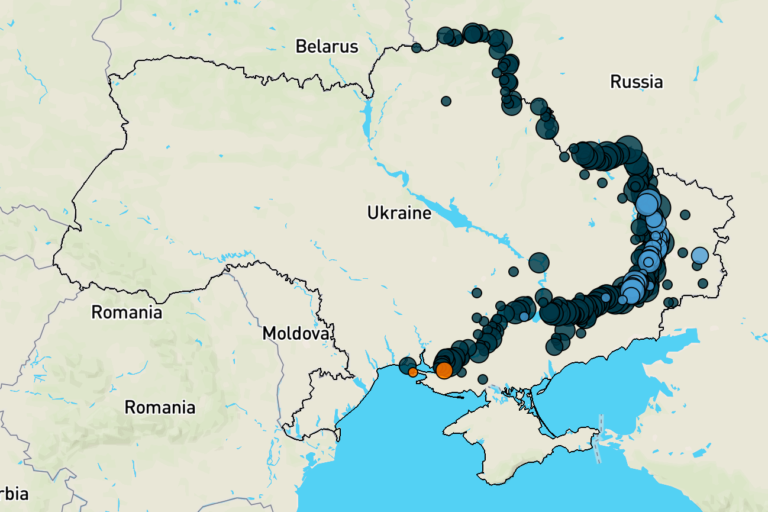 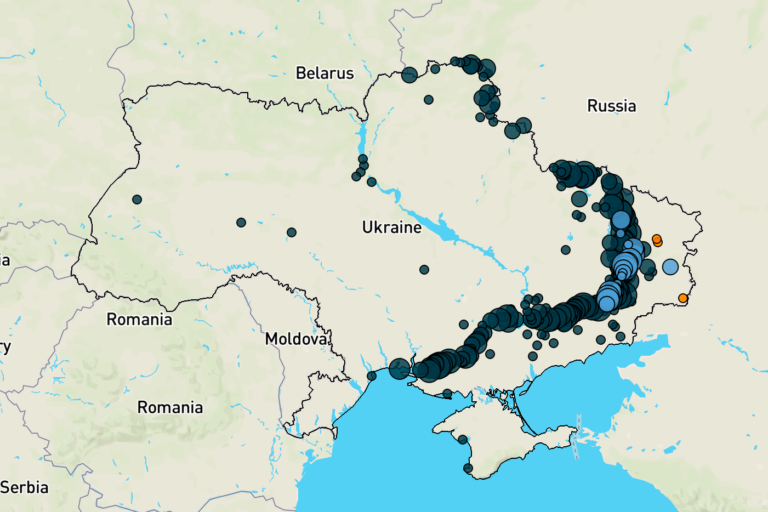 For additional information on the conflict in Ukraine, check our analysis of political violence trends from the start of ACLED coverage in 2018 to the beginning of the Russian invasion. 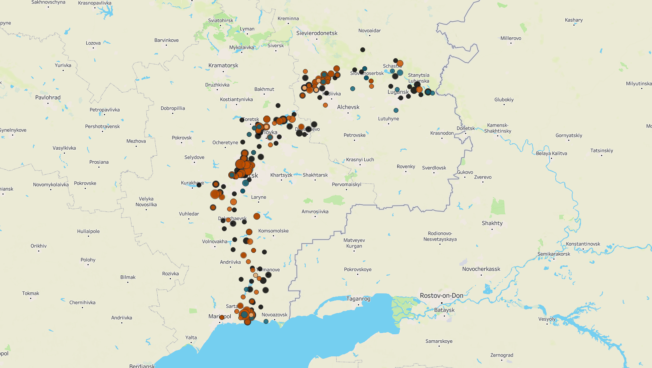 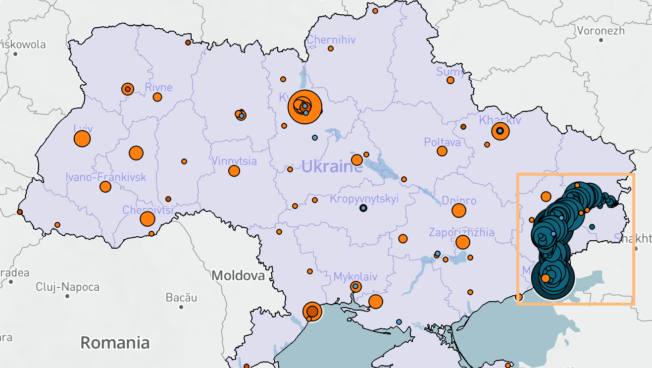 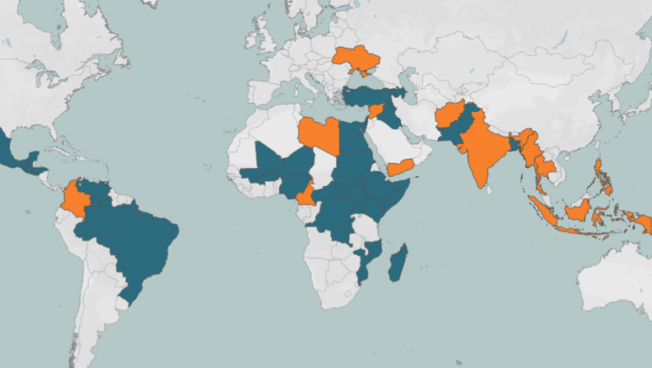 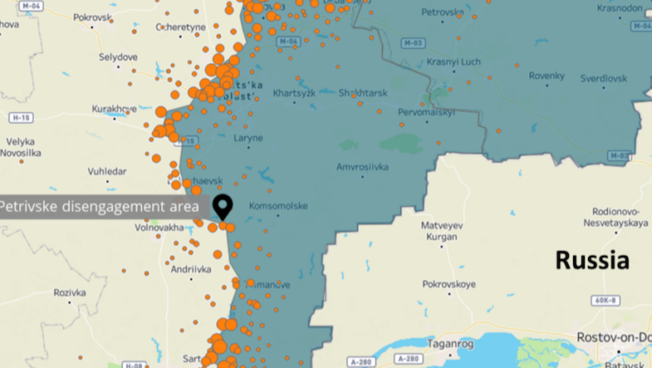 Donbas: Where the Guns Do Not Stay Silent 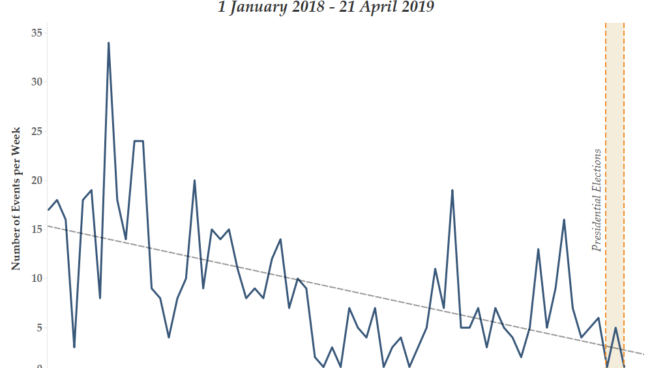 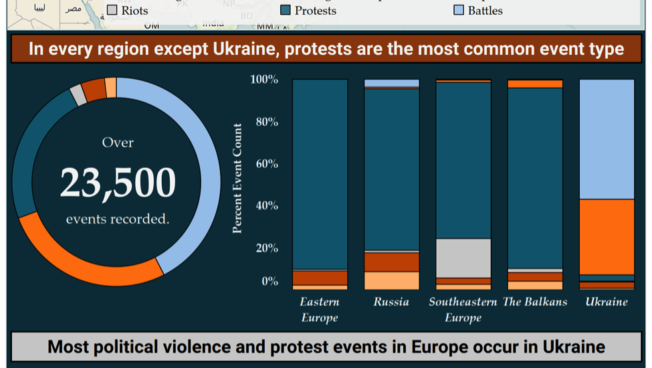