The trend of increasing violence in post-Gaddafi Libya 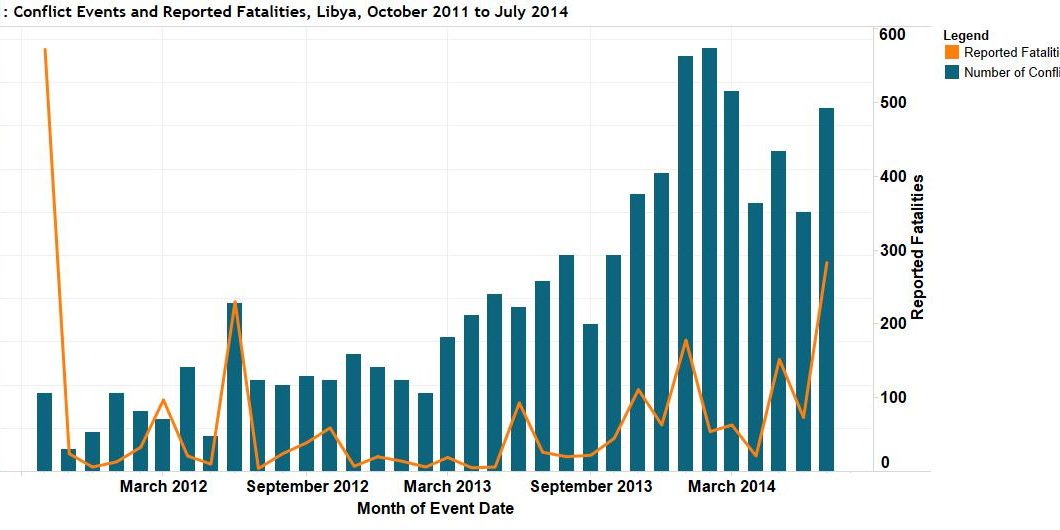 Ongoing fighting between rival militias around Tripoli Airport and battles between the military and Islamist militias in Benghazi have grabbed international headlines and put the post-civil war breakdown of law and order in the North African nation back in the spotlight (BBC, 2014). Both the U.S. Secretary of State John Kerry and the European Union External Action Service have shown public alarm at the ‘dangerous levels’ of militia violence in Libya (Bosalum & Laessing, 2014; Europa, 2014). Furthermore, the Libyan government is publicly discussing the option of inviting foreign intervention to protect civilians and public institutions (Ali et al., 2014). High-ranking politicians in Egypt are currently arguing that intervention may be necessary to secure Egypt’s border with Libya (Kingsley, 2014).

Figure 1 shows that July represents the highest level of reported fatalities in Libya’s post-civil war era. However the early months of 2014 had a slightly higher number of conflict events, meaning that individual violent incidents are becoming more lethal. Figure 2 shows that battles in which no side gains territory have increased dramatically in the past year compared to battles in which one side gains territory, suggesting that the lack of decisive victories may be feeding the violence.

Although there was a noticeable decrease in conflict events and fatalities between Q1 and Q2 of 2014, the wave of militia violence in July has reversed this trend. The Zintan militia which is currently defending the airport against a coalition of Islamist fighters is allied with General Haftar, a rogue general whose campaign against violent Islamist militias in Benghazi has resulted in some of the most violent clashes of this year (Fox, 2014). If the battle for Tripoli Airport represents a geographical expansion of Haftar’s campaign, then the long-term trend of increasing violence may continue.
If violence between the various factions dominating Libya continues to increase, the combination of international attention and an embattled national government amenable to foreign assistance could easily result in a transformation of the conflict in post-Gaddafi Libya.