The trend of increasing violence against humanitarian workers 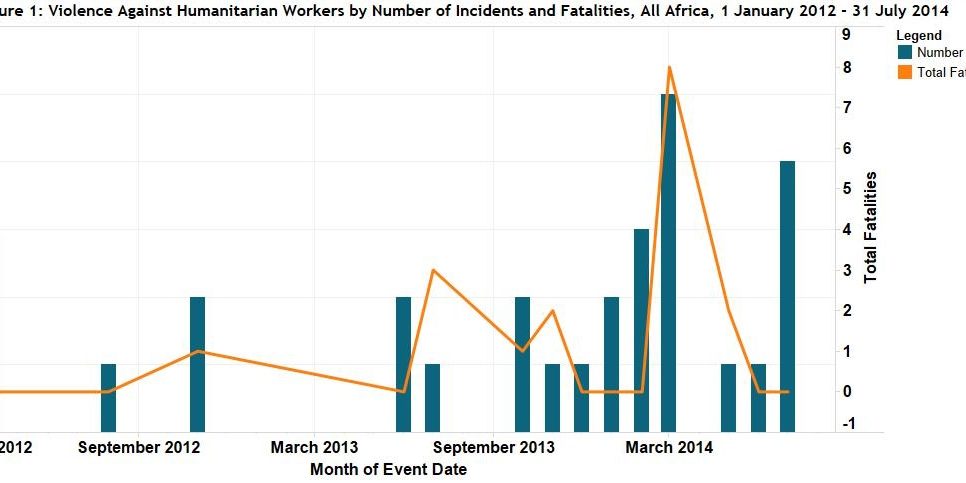 ACLED data reveals that the escalation of violence against humanitarian workers in Africa is driven primarily by an increase in attacks on humanitarians in the Central African Republic. Figure 2 shows that the vast majority of recorded violence since the beginning of 2014 has been concentrated in the Central African Republic, while the South Sudan, Darfur and Mali are responsible for the remainder of the attacks.

The International Rescue Committee has tied the increasing attacks on aid workers in the Central African Republic to an atmosphere of insecurity and impunity that has taken hold of the country, especially outside of Bangui (IRC, 6 June 2014). A review of individual events in the ACLED dataset shows that identified conflict actors, including members of the Séléka rebel coalition and Anti-Balaka militia, have been involved in attacks against humanitarian workers.
However, the majority of the perpetrators have been unidentified armed groups. This raises the possibility that the proliferation of weapons in the country, combined with an atmosphere of impunity, is enabling and motivating non-politicised violent actors to attack humanitarian workers for material gain. The fact that the greatest increase in attacks on humanitarians has come after the spike in wider violence in December 2013 displaced half a million people lends support to the theory that opportunism and desperation are feeding the trend of increasing violence against humanitarian workers (European Commission, 2014).
References
European Commission. 2014. Central African Republic: Echo Factsheet, 11 July 2014 http://ec.europa.eu/echo/files/aid/countries/factsheets/car_en.pdf [Accessed 20 August 2014].
International Rescue Committee. 2014. Delivering Aid ‘increasingly dangerous’ in Central African Republic, 6 June 2014 http://www.rescue.org/press-releases/delivering-aid-%E2%80%9Cincreasingly-dangerous%E2%80%9D-central-african-republic-19853 [Accessed 20 August 2014].
United Nations News Centre. 2014. World Humanitarian Day: UN honours sacrifices, celebrates spirit of aid workers, 19 August 2014 http://www.un.org/apps/news/story.asp?NewsID=48515#.U_WsnPldV8E  [Accessed 20 August 2014].