Conflict in South Sudan: The Rising Role of Political and Ethnic Militias 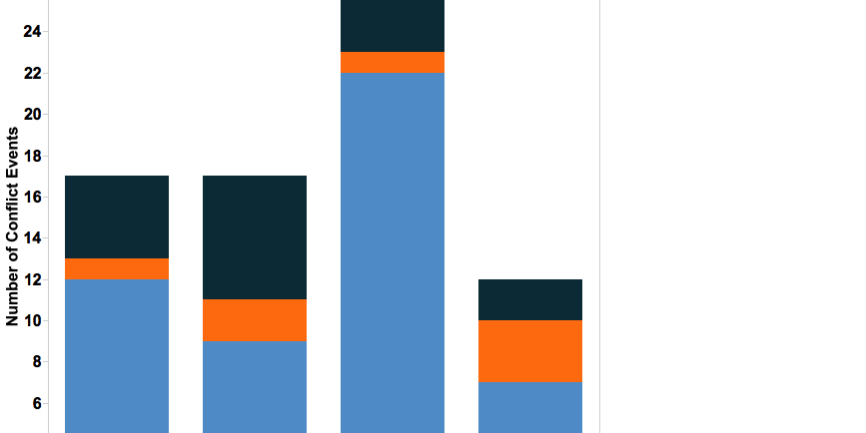 The civil war in South Sudan continues.  The sixth round of peace talks between president Salva Kiir and SPLA/M-In Opposition leader and former vice-president Riek Machar was delayed last week due to agenda disagreements.[1]  Over the weekend, fighting broke out yet again in Upper Nile state, near the town of Renk, which sits near several oil fields.[2]  IGAD, the mediator of the peace talks, has condemned the most recent conflict, stating that it threatens to even further derail peace processes.[3]
Despite reports from media sources, conflict in South Sudan is not comprised only by fighting between government and rebel (SPLA/M-IO) forces; while conflict between the government and rebel forces has made up the majority of battles in South Sudan, most recently about half of the battles in South Sudan involve political and ethnic militias.  Since August, fighting amongst these militias is on the rise, especially as fighting between government forces and militias has reduced significantly. Most of the reported violence against civilians occurs at the hands of these militias; as can be seen in Figure 1.

Figure 2 maps how since the cease-fire in late May, fighting between government and rebel groups has in large part taken place in Jonglei, Unity, and Upper Nile states. However, this fighting has moved exclusively to Upper Nile state in September.  Upper Nile state is responsible for about 80% of South Sudan’s oil production, and fighting between the two groups continues to take place around oil fields.[4]  The SPLA/M-IO “threaten government control of the Upper Nile oil fields, which would leave the Government of the Republic of South Sudan (GRSS) with little revenue to pay its beleaguered army.”[5]  In addition, fighting involving communal and ethnic militias has continued to take place across the country.  However, this fighting has moved almost exclusively to Lakes state in September; the state is experiencing the highest rate of conflict in 2014.  The majority of the violence in Lakes state in September continues to center on cattle-raiding, which has been common in the region.  “Cattle herders in peaceful areas are buying guns amid fears that the conflict will spread to their homes. Others are exploiting the insecurity to settle old scores and steal millions of dollars of cows. Promises by the government to deliver justice are not being honoured. Consequently, some herders may take matters into their own hands.”[6]

Given the more opportunistic aims of these militias – relative to the loftier goals of the SPLA/M-IO – many of these militias do not participate in recurring conflict over months.  Though unidentified armed groups are the most active of these groups, only two of these groups – the Pakam communal militia and the Rup Dinka ethnic militia – have participated in violent events during more than one month since June 2014. Given the crucial role that ethnic and political militias (especially unidentified ones) play in conflict in South Sudan, especially in recent months, it is important to not discount their presence, especially in pursuing peace in the region.  South Sudan will be hard pressed to reduce conflict (especially violence against civilians) and achieve peace if unrest in central South Sudan is not accounted for as peace processes continue.