Freedom of expression in Libya undermined by targeted civilian killings 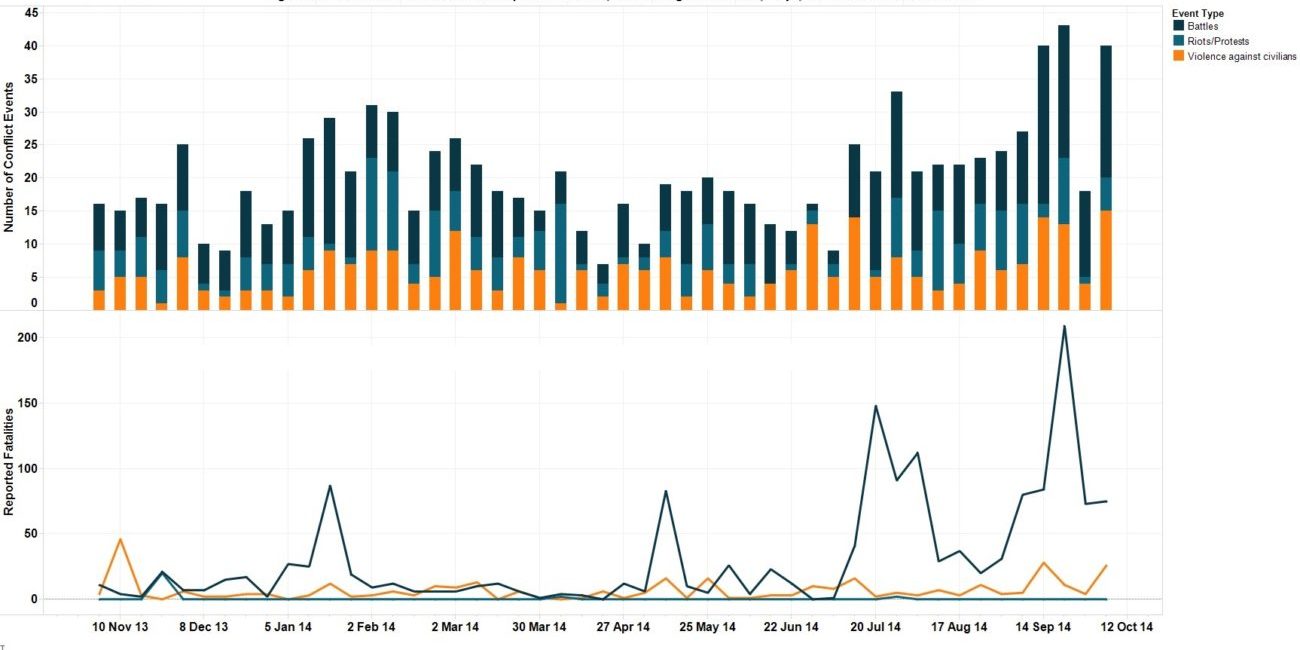 Since elections on June 25th, Libya’s volatile political landscape has, to a great extent, been characterised by warring political and ethnic militias vying for power and control. A joint report by UNSMIL and the UN Human Rights Office (OHCHR, 4 September 2014) documents how the ongoing fighting has impacted ordinary civilian life: multiple armed militias have shown little regard for the safety of non-combatants, with residential areas being subject to indiscriminate shelling. However, a less documented trend is the rise in targeted political assassinations, which threatens the fabric of civil society and principles of free speech in Libya.
Last week, coordinated political violence against civilian populations reached its highest level in 2014 (see Figure 1). These attacks have been concentrated in Benghazi; and other activity is dispersed across Tripoli and the eastern city of Derna. A growing number of human rights activists, media presenters, opposition supporters, off-duty policemen and members of Libya’s military special forces have been subject to threats, assassinations and kidnappings in apparent ‘revenge’ attacks (Foreign Policy, 13 October 2014).

Whilst this spill-over of violence is not a new phenomenon in Libya, this shift in strategy has the potential to undermine the negotiations between the House of Representatives and the General National Congress. In November 2013, Misratan militias killed 43 unarmed protesters in Tripoli calling for militia groups to disband and leave their city. Figure 2 shows that since the 2011 military intervention, state security forces have had a decreasing role in violations against civilian populations, yet this has been counterbalanced by a significant escalation of attacks by political militias. The lack of accountability that armed groups operate with in Libya, appears to have enabled militias to continue to confront nascent civic groups with violence, in a bid to silence resistance (Foreign Policy, 24 September 2014).

Whilst Omar al-Hassi’s General National Congress (GNC) vies for political legitimacy, and the internationally-recognised House of Representatives (HoR) negotiates strategies of governance (Libya-analysis 24 September 2014), both authorities must offer a safe environment for Libyans to express their political concerns without fear of reprisal. Otherwise, the sustained and deliberate use of violence against civilians by rebel groups imposes significant costs on the government’s ability to garner widespread popular support.
A peaceful resolution to the Libyan conflict not only relies on inclusive dialogue at the government level to establish stability. Efforts must also be made to protect ordinary citizens, reduce attacks on freedom of expression and to enable a parallel nonviolent civil movement to establish itself.
References