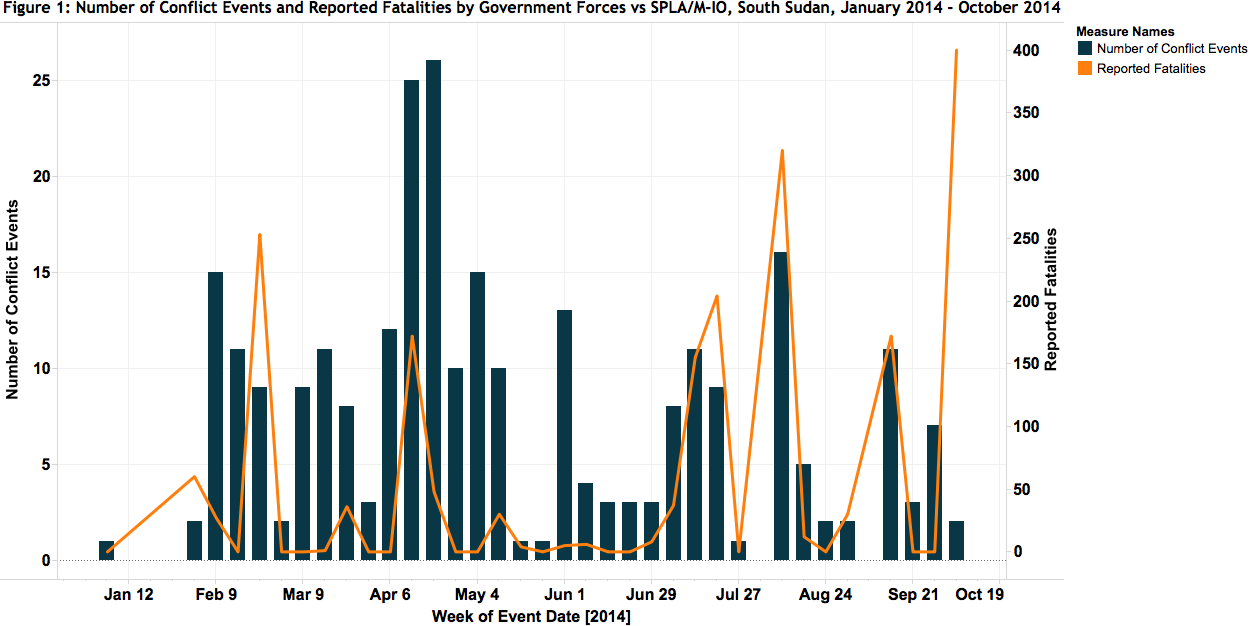 With peace talks between president Salva Kiir and SPLA/M-In Opposition leader and former vice-president Riek Machar on hiatus, conflict in South Sudan continues.  Since the ceasefire agreement between the two in May, the number of conflict events involving the government and the SPLA/M-IO has not significantly decreased.  Though in recent months, the frequency of conflict events has decreased relative to earlier this year (Figure 1), UN officials have warned that conflict is set to increase with the end of the rainy season.[1]  In recent months, every lull in conflict between the two groups has been followed by a spike in violence, indicating that South Sudanese violence is very volatile. Furthermore, these conflicts have become increasingly deadly. The number of fatalities stemming from conflicts between government and rebel forces spiked in July, August, and September, and peaked in October to high levels: an estimated 400-500 government forces were killed when rebel forces allegedly carried out attacks on the Obel (Ashanbenil) and Doleib Hill areas earlier this month.

Peace talks were again suspended earlier this month by the mediator (the Intergovernmental Authority on Development [IGAD].[2]  The two main parties are discussing a power-sharing formula between the president and prime minister. The SPLA/M-IO wants to nominate their own prime minister to be the head of government, essentially running the country, with president Kiir as the symbolic head of state, devoid of real power.  Expectedly, the government opposes this plan.  Civil society groups are calling for more constructive negotiations to resolve the crisis, especially given the high number of human rights abuses that have been occurring in the country.[3]  During the hiatus, African leaders (including Kenya[4] and Tanzania[5]) have invited opposition leaders to discuss peace processes.

Though conflict between the government and rebel forces has made up the majority of battles in South Sudan, a considerable level of conflict involves political and ethnic militias (Figure 2).  In recent months, about half of the number of violent conflict events in South Sudan consistently involves these groups.  Additionally, most of the reported violence against civilians occurs at the hands of these militias. Since May, about two-thirds of instances of violence against civilians have been by political and ethnic militias (Figure 3).

Figure 4 displays where most violent conflict has been taking place in South Sudan.  Since the cease-fire in late May, fighting between the government and SPLA/M-IO has, in large part, taken place in Unity and Upper Nile states.  Since last month, however, fighting has become less prevalent in Unity, especially relative to the level of violence it has seen otherwise, with efforts continuing to be centralized in Upper Nile.  Upper Nile state has approximately 80% of South Sudan’s oil production, and fighting between the two groups continues to take place near the town of Renk (situated near oil fields). [6]  Control of the Upper Nile oil fields by rebel forces would compromise the government’s ability to pay its army forces and has hence been an attractive target.[7]

Meanwhile, fighting involving political and ethnic militias has been concentrated in large part in Lakes state, with some violence also seen in East, Central, and West Equatoria states. During October, conflict involving political and ethnic militias in Lakes state has diminished relative to prior levels.  Meanwhile, Warrap has experienced an increase in conflict involving these groups, specifically conflict involving ethnic militias.  While previously the majority of militia conflict was a result of cattle-raiding, only one conflict event this month has stemmed from this cause: nine people were killed and four wounded in an attack allegedly carried out by Rumbek North youth in which seventeen cows were killed and twenty other injured.
Political militias are becoming more active in Upper Nile state; in October, there are multiple instances of unidentified armed groups kidnapping UN contractors in the state.  Unidentified armed groups have also been responsible for the killing of three people this month after attacking government soldiers in an attack reportedly triggered by the death of a primary school teacher while in government custody.  Despite these attacks, violence involving unidentified armed groups has actually been decreasing.  While violence involving unidentified armed groups peaked in August (with 16 conflict events), the number of events decreased by about half in September (to 9 conflict events), and has again dropped with only 3 conflict events of the sort reported so far this month.