Bombings, Explosives and Conflict Part 2: Weapons of the Weak? Remote Violence and the Relative Strength of Non-State Actors 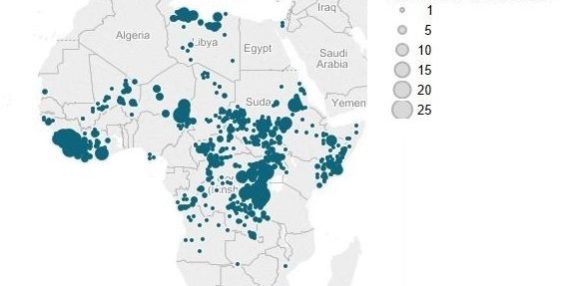 Does the use of remote violence indicate weakness in a non-state conflict actor? Forms of ‘remote violence’, such as roadside bombs and improvised explosive devices (IEDs), enable armed groups to attack targets that they do not have the capacity to face directly. As a result these weapons have been described as ‘weapons of the weak’ (Denselow, 2010).
Merari (1993) argues that remote violence is used by groups who lack the will or ability to take over territory but who seek to dictate government policy and public behaviour through fear. In contrast stronger rebels which can challenge the state’s sovereignty over its territory may use more conventional military arms suited to direct military engagement.
The data does lend support to this theory, if the ability to seize and control territory is taken as a marker of strength. Since 1997, 4.57% of recorded battles in Africa have resulted in a non-state actor taking over territory. However, if the data is filtered to only include confrontations involving the use remote violence, this percentage drops considerably to 0.8%.

The relationship between remote violence and relative strength is also illustrated by the shift in the use of weaponry by Al Shabaab. Al Shabaab was pushed out of Mogadishu by African Union troops and has since lost significant amounts of territory it used to control (Associated Press, 6 October 2014). Figure 3 shows that since 2011 Al Shabaab’s use of remote violence has drastically increased relative to its use of more conventional heavy armaments suggesting that the group has deferred to using the ‘weapons of the weak’ as it has become weaker.

As a result, there is evidence that remote-violence is a weapon of the weak. But, the example of Al Shabaab raises the important point that groups will often use multiple types of weaponry and tactics at any one time. Even when Al Shabaab is comparatively weak, the group still employs heavy armaments. It is perhaps better to conceive of remote violence not as the preserve of weak non-state actors, but a low-cost tactic to be used in tandem with other types of violence.
References