Violence against Journalists and Press 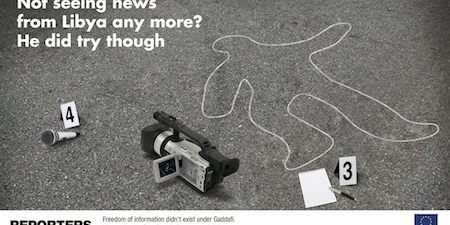 Reporters Without Borders (RSF) launched a new awareness campaign last week about the persecution of journalists and news media in Libya (Figure 1); since the end of the Libyan revolution in 2011, RSF has reported a number of murders, abductions, and physical attacks or acts of harassment targeting journalists.[1] This trend is not unique to Libya, as the recent attack on Somali television director Abdirisak Jama (known as ‘Black’) demonstrates. Jama was shot and seriously wounded outside his home in Mogadishu earlier this month, one of a string of arrests and prosecutions of journalists occurring in Somalia by both government forces as well as armed militias such as Al-Shabaab.[2]  This event made the draft media law being debated in Somalia an even more pressing concern. The law gives the National Media Council of Somalia the power to impose severe sanctions on journalists and media houses for ill-defined offenses, and is designed to make reporting in Somalia more difficult.[3] Media personnel elsewhere on the continent have recently been exposed to heightened danger and violence: Elie Smith, a Cameroonian TV journalist in the DR-Congo, was robbed at home, and saw his sister raped last month in what is suspected by Smith’s media colleagues as being “a government-orchestrated act of reprisal”.[4]  Smith had allegedly been under surveillance for some weeks, stemming from his outspoken comments on his program. Journalists are also victims of community violence:  “three journalists were among a total of at least eight people who were lynched by villagers during a health team’s visit to a remote part of southeastern Guinea … to inform the local population about the dangers of the Ebola virus.”[5]

Thus far in 2014, about 45% of instances of violence against civilians in which journalists are victims occurred at the hands of ‘political militias’ – these are armed ‘political gangs’, often organized by politicians or political parties. Political militias have consistently been at the forefront of committing these violent events, and perpetrate these events at an increasing rate in recent years (Figure 3).  As of 2014, they are responsible for 36 violent events against journalists; last year, they were responsible for 18, 10 in 2012, and 6 each year the two years prior. More events are perpetrated in North Africa – specifically in Libya and Egypt – though attacks on journalists are seen throughout the continent (Figure 4).

Governments also commit violence against journalists – almost 25% of journalist attacks can be attributed to government forces.  The largest number of these events is in Egypt this year (4); Egypt has consistently seen the most violence against journalists as civilians in recent years (12 total 2011). The governments of DR-Congo and Liberia have targeted journalists as well (3 events each this year); before 2014 both exhibited minimal violence of this sort. Uganda has experienced as much violence against journalists as civilians as Egypt (11 total since 2011); these events peaked in 2011, coinciding with presidential and parliamentary elections. Since 2011, these events have decreased; this year Uganda only exhibits one such event when a journalist was allegedly badly beaten multiple times by policemen as he was covering local elections.  Overall, governments are responsible for 20 of these violent events thus far in 2014, while the violence vacillated in previous years.

Civilians engaged in rioting have increasingly attacked journalists, and are responsible for 25% of such attacks this year, almost surpassing the attack rate of 2013.
Continuing with the trend of new perpetrators of these violent events, ethnic militias have also become increasingly involved in committing these events in the last two years, although this trend is largely located in Libya. These events have been the deadliest, specifically a peaceful demonstration in November of last year where protesters called on militiamen to leave the Libyan capital of Tripoli; 43 people were killed and 400 others wounded, including media personnel[6] by the Misratah Communal Militia.

Overall, fatal attacks against journalists decreased this year relative to 2013, but the number of violent events is higher than it has been at any point in recent years. In addition to increased activity by the usual suspects (government forces and political militias), additional perpetrators (rioters, ethnic militias, and external forces) create an even more hostile environment for journalists working throughout Africa. Some countries- specifically Egypt and Libya – have experienced journalist violence to a much higher degree relative to others, but attacks are found throughout the continent. This suggests that journalists are not safe in much of Africa (Figure 5).