Rebel Groups of the DRC and Attacks on Civilians 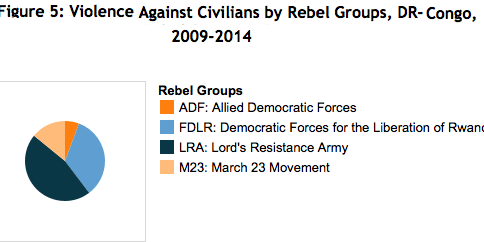 When looking at violence against civilians in DR-Congo from 2009-2014, rebel groups have been responsible for the majority of fatalities in these violent events (Figure 1). ACLED regards ‘rebels’ as armed agents in opposition to the established government with aims to overthrow the regime, or establish a separate state; in short, these groups have national political aims. While rebel groups have been the actors responsible for the highest number of deaths in violent attacks against civilians in the last five years by far, other groups – including military, police, political, and communal militias – commit significant violence against civilians in DR-Congo.

Yet, critically, while rebel groups continue to operate in DR-Congo and create instability in the region, the Congolese government does not face a significant rebel threat in the east. Instead DR-Congo continues to serve primarily as the strategic chessboard for the region’s problems. Though domestic insurgents are less of a problem in Congo, local problems and armed agents abound, and the lack of a unified adversary makes it difficult for government and allied forces to overcome continued instability.

Given the dynamic nature of conflict in DR-Congo, rebel groups vary in their level of involvement in violent events, specifically violence against civilians, with different groups ‘taking the lead’ in perpetrating these attacks over time. Figure 2 shows the involvement in violence against civilians of the primary four rebel groups in DR-Congo during this time period – the Allied Democratic Forces (ADF), the Democratic Forces for the Liberation of Rwanda (FDLR), the Lord’s Resistance Army (LRA), and the March 23 Movement (M23) – while Figure 3 maps their activity. Relative to that experienced in 2009-2012, violence against civilians at the hands of rebel groups has become less prevalent in the most recent past; though DR-Congo remains a dangerous place for civilians, as evidenced by the recent spike in attacks seen this month.

Below is a review of the rebel grounds – all created in, or supported by, neighboring states – and their actions towards civilians.
The Lord’s Resistance Army (LRA) is a Ugandan rebel group, made up of Ugandan combatants as well as recruits forcefully abducted from DR-Congo, South Sudan, and the Central African Republic (MONUSCO, 2014). DR-Congo became the group’s primary activity area as of 2006-7; with activity centered largely in Orientale province. The group gained global notoriety for extremely brutal attacks on civilians and for the conscription of child soldiers. Since 2009, the group has been the deadliest rebel group in terms of violence against civilians in DR-Congo by far (Figure 4), and is responsible for the largest proportion of these events (Figure 5); it was the ‘deadliest’ group for civilians in both 2009 and 2010. After a ‘hiatus’ in the frequency to which they were committing these attacks – likely due to the limited size of the group, believed to be between 300-500 active agents – they have again begun participating in attacks against civilians this year and primarily in the peripheral areas of Orientale, though to a much lesser degree than their operations at the height of their activity.

The Democratic Forces for the Liberation of Rwanda (FDLR) is the largest rebel group currently operating in DR-Congo (MONUSCO, 2014), and has consistently active group in committing violence against civilians over time. Though the UN reports a growing number of Congolese among their ranks, the group’s identity is primarily Rwandan (MONUSCO, 2014). They are mainly active in Eastern DR-Congo since 1994, and have expanded over time into Orientale and Katanga provinces. Their participation in violence against civilians peaked in 2011 and after a brief decrease in their participation in these activities in 2012 and 2013, they have again turned to violence against civilians this year, becoming the ‘leader’ in the perpetration of these events this year. Their activity continues to be centered in the Kivu region, though they have been responsible for violent events against civilians in both Orientale and Katanga provinces this year.

The influence of Rwanda is again demonstrated by the March 23 Movement (M23), a rebel group founded in early 2012, with documented military and financial links to Rwanda. The group surrendered at the end of 2013, announcing the end of their rebellion and that they would pursue their goals “through purely political means” thereafter (AFP, November 5, 2013). When active, it operated almost exclusively in the Kivu region, and was designed to counter the FDLR presence. The M23 was responsible for the majority of violence against civilians by rebel groups in 2012 and early 2013. Since then, the only violence against civilians that the group has been responsible for has been when an abandoned bomb exploded in January of this year in Rutshuru, killing five.
The Allied Democratic Forces (ADF) is a Ugandan rebel group, with presumed links to Sudan, though over half of its members are now Congolese (Al Jazeera, July 27, 2013). A large number of its members claim an Islamic affiliation, and the group is often categorized as an Islamist movement (MONUSCO, 2014). However, given that the group has embedded itself into its surrounding community in DR-Congo and worked towards becoming more self-sustaining, wherein their funding support is no longer primarily from various external Islamic national and regional actors. As a result, the group’s identity is increasing complicated, and cannot be categorized solely as an Islamist movement (Al Jazeera, July 27, 2013). The group has merged with remnants of other Ugandan rebel groups in DR-Congo, including the National Army for the Liberation of Uganda (NALU), and operates primarily in eastern DR-Congo spanning into Orientale and Equateur provinces. The group has not been responsible for a significant number of civilian casualties until recently; however, they are currently the sole rebel group responsible for violence against civilians.

Figure 6 shows the deadliness of rebel groups oriented towards the overthrow of the national government towards civilians; these groups are distinct from the political and ethnic militias that also participate in conflict and violence in the area. Civilian fatalities at the hands of rebel groups specifically have spiked this year to over 10 times the levels seen previously this year, and are attributed largely to the ADF. These attacks primarily involve the use of knives, machetes, axes, and clubs in killing civilians, and are often coupled with abductions and rapes; homes have also been broken into, looted, and burned (AFP, October 18, 2014).

Why do foreign agents, or foreign-supported agents, continue to operate in Congo and target Congolese civilians? One reason may be that they are not interested in overthrowing their respective governments and are truly motivated by an overthrowing of the Congolese government. Figure 7 shows the activity of the four rebel groups in partaking in battles against government forces versus violence against civilians.  The M23 participated in a relatively large number of battles against government forces in 2012-2013, and in 2014 the ADF is doing the same, especially relative to their participation in violence against civilians.  Alternatively, the FDLR has participated in relatively fewer battles against government forces since 2012, especially in comparison to their frequent exhibits of violence against civilians. The LRA too has primarily focused its energy on violence against civilians rather than battling Congolese government forces (though in 2014, they too have begun exhibiting more frequent instances of these battles). The substantial participation of some of these groups in battling government forces, especially relative to their other conflict activity, suggests that at least some of these groups (M23, ADF) do have some goals of harming the Congolese government.
An alternative argument may be that rebel groups use DR-Congo as a place to ‘survive’ while waiting out an opening in their respective countries, during which time they display what a threat they can be to their respective domestic governments through violent attacks against civilians. This goes against common arguments, however, that violence against civilians is a form of retribution for either government or alternative opposition support. It is not assumed that civilians support foreign groups.  In instances where rebel groups become embedded into their surroundings areas, however – through intermarriage, becoming socially-integrated into wider society, developing business interests, acquiring political influence – they may no longer be as ‘foreign’ to local civilians, which could serve to make a ‘long-term survival strategy’ easier and less costly.  For example, “the ADF’s promises of employment and education opportunities have resonated with [local civilians in the borderlands where the group operates]. In a region confronted with an abundance of former combatants, as well as a lack of formal work opportunities, the ADF’s provision of a salary (and a relatively good one at that, namely USD$100/month), has proven enticing for many” (Al Jazeera, July 27, 2013).
While Congolese government attention seems to increasingly be focused on local political militia activity, continued rebel activity exhibited in DR-Congo involving groups with links to other regional governments suggests that Congolese conflict is a regional game with players well beyond Kinshasa and the Kivus. With the UN’s top human rights official Scott Campbell declared “persona non grata” after a UN report published last month denounced rights violations by the police (AFP, October 16, 2014), civilians don’t seem to have many advocates left on their side.

Roudabeh Kishi is the Director of Research & Innovation at ACLED. She oversees the quality, production, and coverage of all ACLED data across the globe; leads research and analysis across regional teams; aids in new partnerships with local sources and users; and supports the capacity building of NGOs and conflict observatories around the world. Dr. Kishi holds a PhD in Government and Politics from the University of Maryland with specializations in international relations and quantitative methodology. She is fluent in English, Farsi, and basic French.
6 November 2014
Share
TweetShare on Twitter Share on FacebookShare on Facebook Share on LinkedInShare on LinkedIn