A Review of Research Using ACLED in 2014 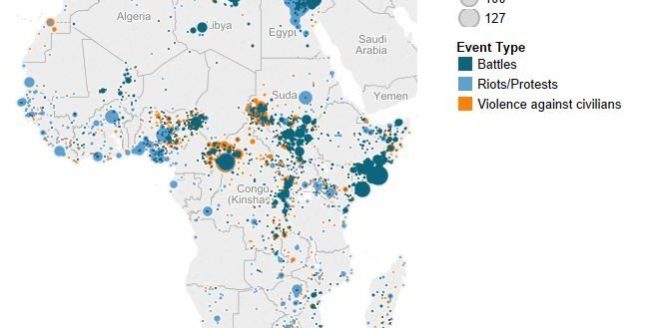 ACLED exists as an open-source tool to aid research into conflict dynamics and political violence. Certain traits of ACLED make the dataset especially suited to fine-grained micro-level analysis. Below are a selection of research papers published this year which have used ACLED; articles are chosen based on how certain traits of the ACLED enabled the authors to carry out their research.
Early studies on civil war and political violence often used highly aggregated data, whereby the country, country-year or wars themselves was the unit of analysis (Gleditsch, 2013). In contrast ACLED is a highly disaggregated dataset composed of discrete events, making the dataset especially suited to micro-analysis. Temporal disaggregation also opens up more opportunities to study causal mechanisms and enables the number of conflict events or fatalities can be compared to another variable on a much finer timescale (Landis, 2014).
Landis (2014) relied on ACLED’s high level of disaggregation to study the relationship between dramatic shifts in temperature, seasonality and conflict. Landis’ findings include the lack of a significant relationship between temperature shocks and conflict, measured as both number of discrete events and number of fatalities. However, Landis showed that extensions of warm predictable weather in highly seasonal countries is positively related to organised and non-organised forms of political violence. This finding carries serious implications as current climate change projections include milder winters, earlier springs and longer summers.
Another strength of ACLED is the use of detailed categorisations of conflict events and actors that move beyond simple state and non-state definitions. This enables researchers to see how the types of actor and forms of violence, as well as the aggregate level of political violence, change over time.
Raleigh (2014) found that political militias have become the main perpetrators of political violence, supplanting state and rebel forces. Regression analysis showed that the aggregate and proportional level of political militia activity is positively related to the number of political parties and the development of participatory democracy. This finding shows that the opening up of the political sphere enables political elites to use violence to reform the political landscape to their advantage.
The locational attributes of ACLED have made it very attractive to researchers aiming to study subnational patterns related to conflict. Armed conflicts very rarely affect a significantly large portion of a country’s territory, and are often spatially concentrated (Raleigh et al., 2010). As a result modern studies on conflict often focus on the subnational patterns of political violence. ACLED is perfectly suited to these studies as each event in ACLED is given both the exact coordinates and the administrative or provincial district of where it took place.
Abidoye and Cali (2014) found that global hikes in the price of oil were significantly related to conflict in oil-producing regions in the Nigeria. This is because the increased value of oil raised the incentive for rebels to fight for the control of production areas. However this effect was reversed after an amnesty deal in 2009. During this period, state oil revenues were used to buy off militant groups in oil-producing areas. A decrease in the price of oil limited the ability for the government to meet the rebel’s set price of loyalty, provoking the rebel’s to engage in violence.
In some cases, the occurrence of conflict is not the dependent variable but a covariate which can be analysed against other highly localised social phenomena. Dabalen and Paul (2014) studied the relationship between conflict and dietary diversity in Ivory Coast. The research was carried out on a departmental level and the subnational focus of the ACLED dataset made it the ideal data source for the analysis. By using ACLED in an Ordinary-Least Squares regression against World Food Program food consumption scores (FCS), findings indicate that the areas worst hit by conflict suffer most from food insecurity and that direct victims of conflict are those most at risk from severe malnutrition.
In a similar study, Landis et al. (2014) use ACLED’s locational accuracy to study the relationship between the occurrence of conflict and the onset of Nodding Syndrome in the Acholi sub-region in Northern Uganda. The study identified that there was a latent period of approximately 5-6 years between peak incidences of conflict and peak Nodding Syndrome cases.