Conflict Dynamics Within and Across Africa and Asia 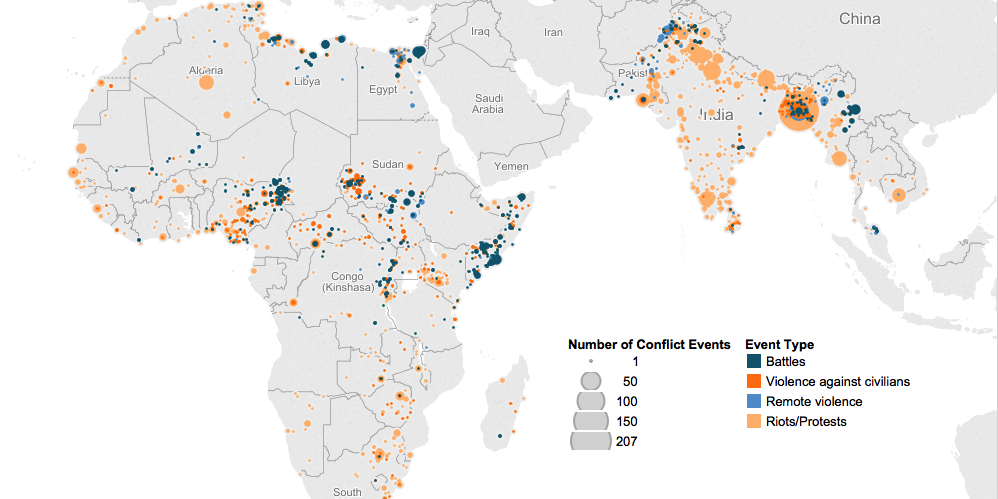 ACLED’s release of data for Asia in addition to ACLED’s African data will allow for new comparisons to be made in regard to the conflict patterns within and across countries on both continents. While the ACLED Asia team continues to collect backdated information across South and Southeast Asian states, the newly available real-time data can be combined with the African real-time data to explore some preliminary comparisons regarding conflict dynamics in 2015 (Figure 1). 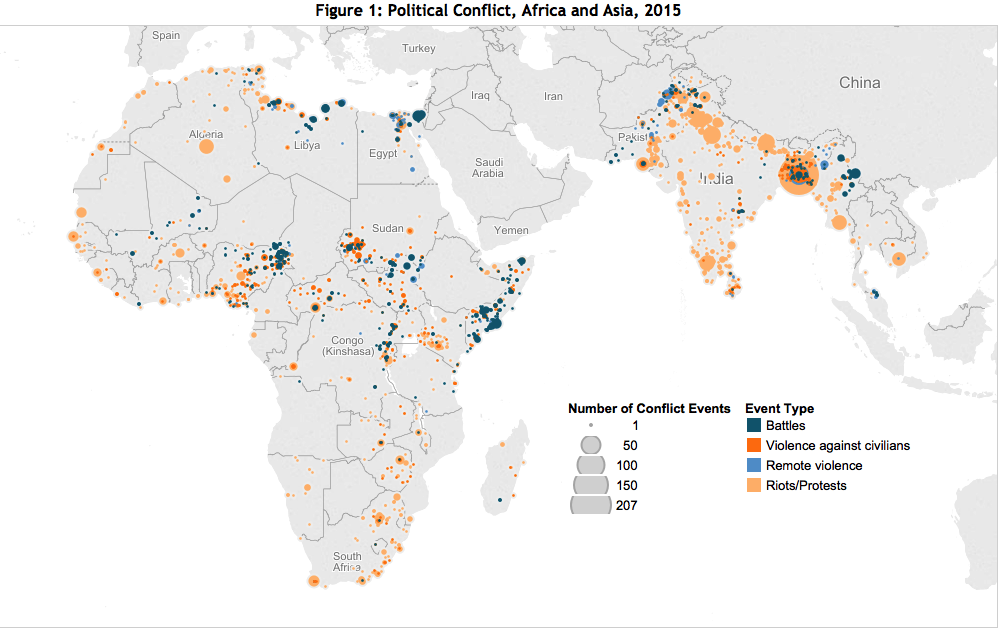 South/Southeast Asia and Africa have seen similar rates of political conflict so far this year, but the composition of the respective conflict differs (Figure 2). For example, Asia sees considerably more riots and protests than other conflict types (at 74% of total political violence). While African protests and riots are increasing, it also experiences more armed, organized violence than these typically civilian events. When comparing fatalities stemming from organized, armed conflict events, the difference between the two continents is much more stark – far more Africans have died in recent conflict compared to South and Southeast Asians (Figure 3). 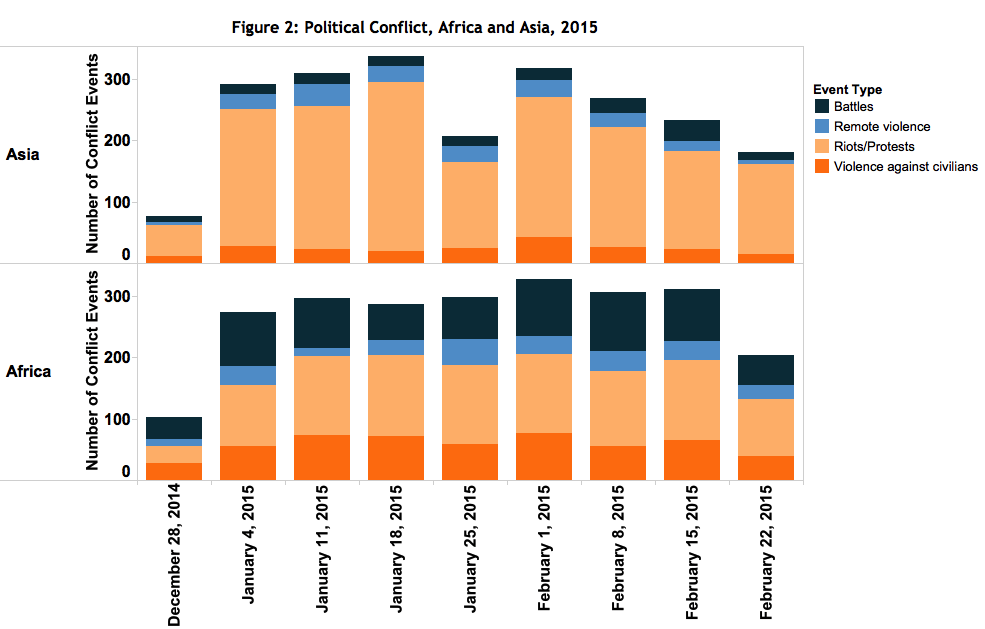 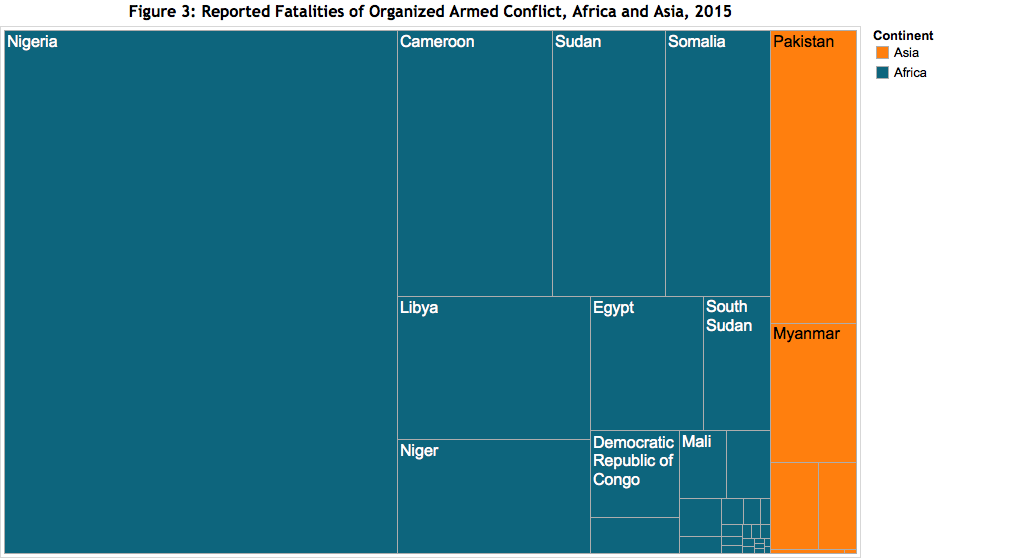 The two continents have experienced organized, armed conflict by a similar actor since the beginning of 2015 – political militias are responsible for the highest proportion of violence, followed by government forces (Figure 4). Africa has far more non-state actors engaged in organized, armed conflict, which is expected given the difference in the number of countries (Figure 5). In Africa, Boko Haram has been the most deadly recent actor, responsible for almost as many fatalities as that by all other non-state actors combined on both continents (largely driven by their deadly attacks in Baga in January in which as many as 2,000 civilians were killed by the militant group during sustained attacks over a period of a number of days) (Figure 6) (BBC, 2015)). In our Asia collection, Tehreek-i-Taliban Pakistan (TTP) accounts for the most events and fatalities in recent events (at 184 for January and February 2015). 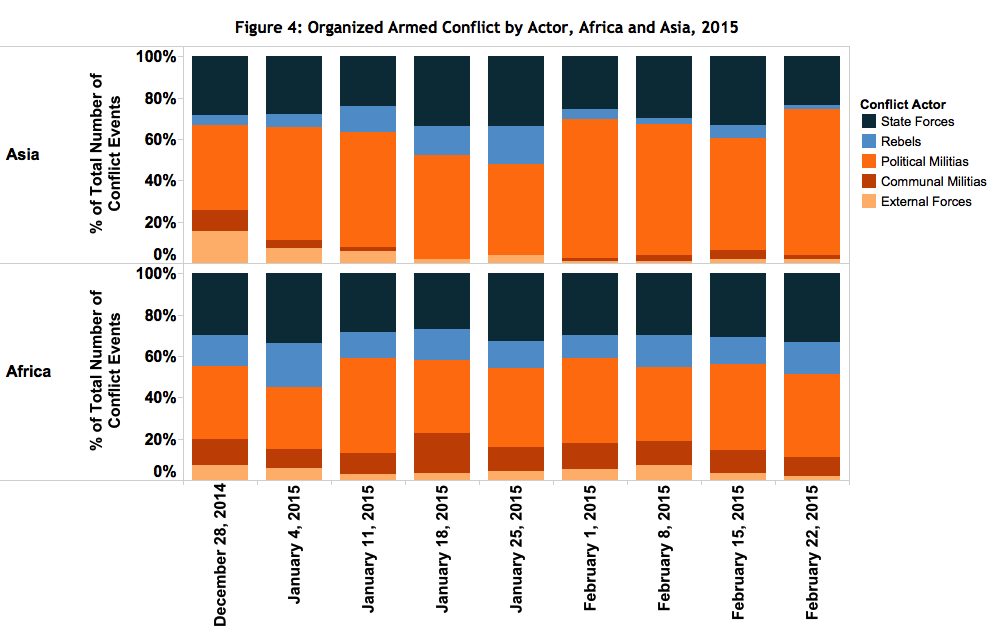 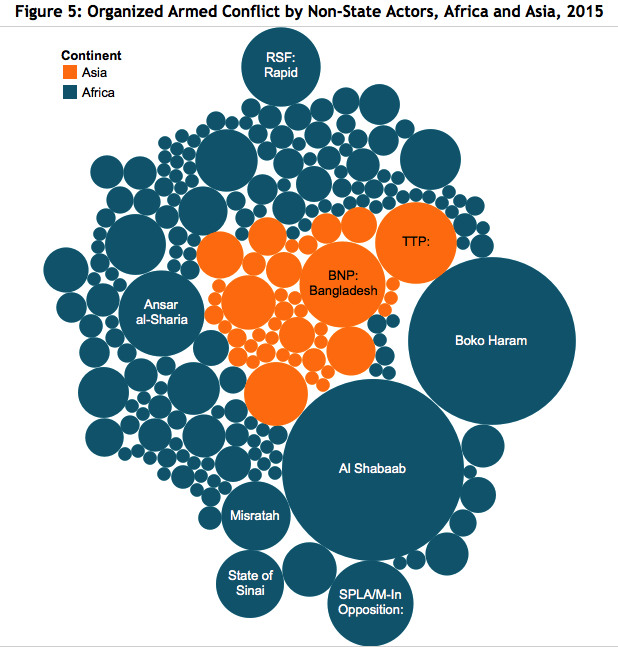 Unidentified armed groups have made up approximately 11% of all organized, armed conflict on each continent this year. These groups have many similarities to political militias, especially in that they can often act as ‘mercenaries’ and do the violent bidding of elites. As a result, many are not keen to take open responsibility for their violent actions by name. These groups are most active in Bangladesh and Egypt (188 and 149 events this year, respectively). Political agents often do not officially acknowledge their role in violence, especially acts committed against civilians. Unidentified groups may remain un-named due to media restrictions. To ignore unidentified violent events is to knowingly under-record and bias the record of the threats to peace and stability occurring across actively conflicted states. 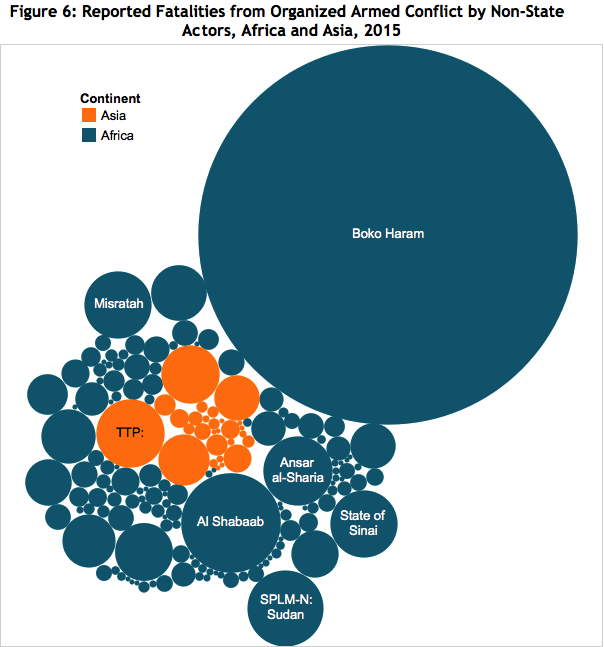 In our Asia collection, Bangladesh has seen the most organized, armed conflict events in 2015; this is driven largely by conflict involving the Bangladesh Awami League and the Bangladesh Nationalist Party Militia (BNP). While a large number of these conflict events occur in the capital city of Dhaka, organized, armed conflict (of all types – battles, remote violence, and violence against civilians) occur across the country as well (Figure 7). Pakistan, however, has been the deadliest Asian country so far in 2015; this is mainly attributed to the conflict activity of state forces as well as the Hafiz Gul Bahadur Group, Lashkar-e-Islam (LeI), Tehreek-i-Taliban Pakistan (TTP), and unidentified armed groups. Fatalities are highest along Pakistan’s shared border with Afghanistan, and are also largely attributed to remote violence tactics. 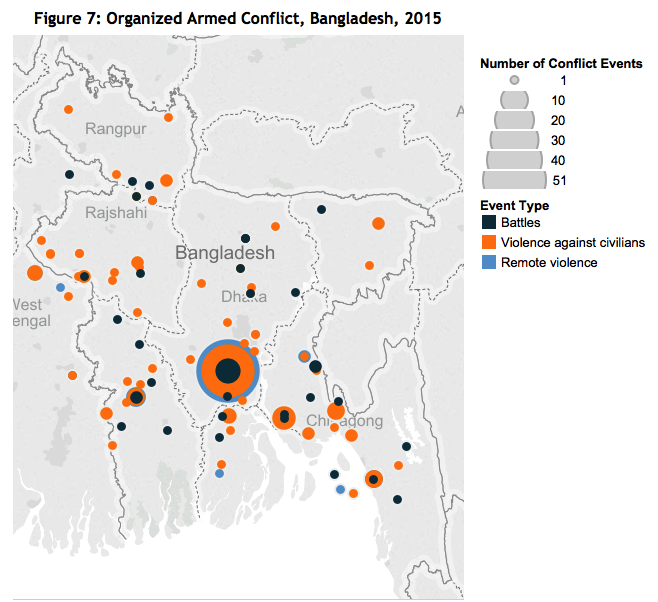 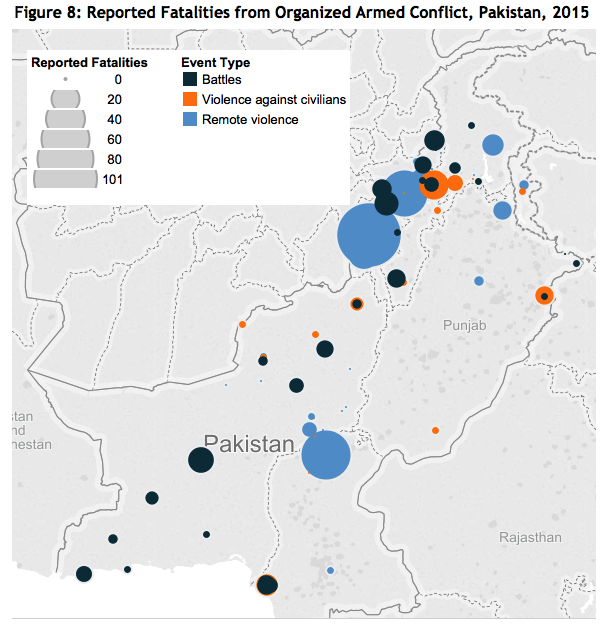 In Africa, Somalia has seen the most conflict in 2015; this is largely a result of continued conflict between Al Shabaab and state forces. Battles are most common, though other violence tactics are employed readily as well across the country, and can especially be seen in Banaadir (Figure 9). In regard to fatalities, however, Nigeria has been the deadliest country by far in Africa in 2015. This deadly violence is seen primarily in northeastern Nigeria, and is largely attributed to civilian targeting, though battle-related fatalities are prevalent as well (Figure 10). 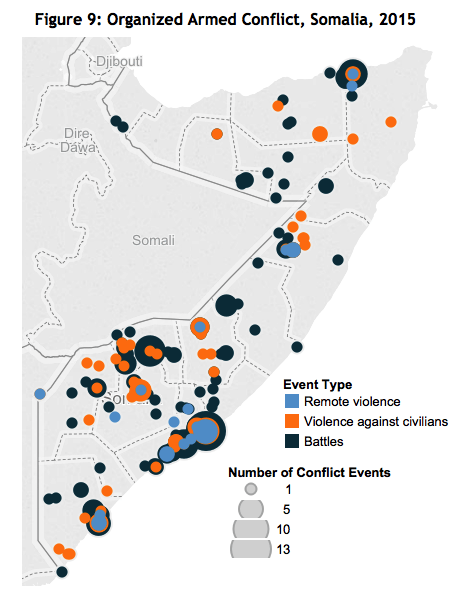 As more conflict data become available coding the past conflict trends seen in South and Southeast Asia, further comparisons regarding the conflict dynamics of the continent – especially relative to Africa – can be understood, and the similarities and differences in violence tactics used by varying actors across the two continents can be analyzed. But initially, there is something to be explored in the use of rioting and protesting across Asian states to engage in political change, and the use of militia groups in Africa to affect the same type of changes. Studies of rioting in India (Wilkinson, 2006) suggest that political elites encourage this form of ‘mob’ politics as a way to demonstrate their strength and ‘value’. The same logic is applied to political militia behavior across African states (Raleigh, 2015). The use of alternative forms suggests an underlying incentive in the institutional structures of South/Southeast Asian and African states that demands further study.