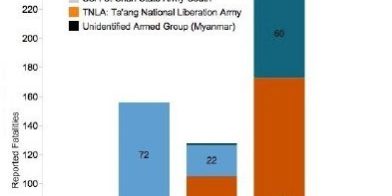 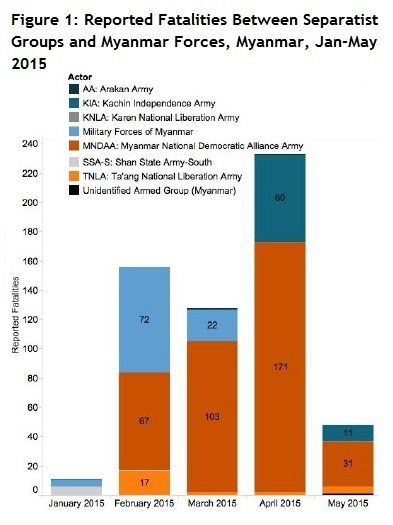 These clashes come in the midst of nationwide ceasefire negotiations between the Myanmar government and ethnic armed groups. On March 30, the Myanmar government and several armed groups agreed on a nationwide cease-fire draft in Naypyitaw (Irrawaddy, 2015a). However, the draft remains unsigned by senior leaders on both sides (Myanmar Times, 2015). Though the Myanmar government has indicated its willingness to move forward with the ceasefire, the Nationwide Ceasefire Coordinating Team (NCCT) concluded its meeting with armed group leaders in Pangsang with a statement indicating armed group leaders would need to meet again before negotiations with the government could continue.
The MNDAA, TNLA, and AA have so far been excluded from ceasefire negotiations, despite their membership in the Nationwide Ceasefire Coordination Team (NCCT) (The Nation, 2015). At the Pangsang conference, held from May 1-6, these groups expressed their concern about their exclusion from the negotiations as well as ongoing fighting in their respective regions (The Irrawaddy, 2015b). At the end of the conference, ethnic rebel leaders called on the government to prove its commitment to peace “through constitutional reform and cessation of hostilities on the country’s north-east and western frontiers” (Irrawaddy, 2015c). Furthermore, the NCCT indicated that they would not sign a ceasefire with the government without the inclusion of the MNDAA, TNLA, and AA from the nationwide ceasefire agreement (Irrawaddy, 2015c). As a result, local news organizations have expressed doubt that ceasefire negotiations will be concluded in the near future (The Irrawaddy, 2015d). 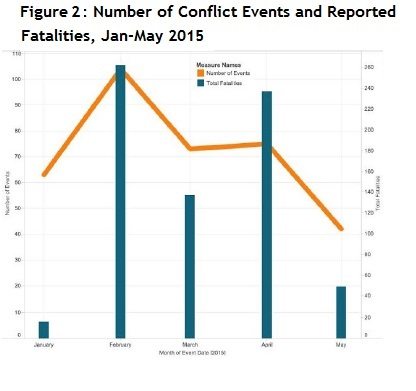 In April and March alone, the Myanmar Armed Forces and MNDAA engaged in 28 recorded battles, with 281 fatalities. Myanmar Armed Forces claimed to have regained territory in five of these battles. The Myanmar government issued a gag order on MNDAA statements coming from an ethnic armed group summit being held in Panghsan, Shan State near the beginning of May—telling journalists the MNDAA had “been outlawed by the government” and threatening legal repercussions for violations (Irrawaddy, 2015e). On May 15, the Myanmar military claimed to have seized the last MNDAA stronghold in northern Shan state (Mizzima, 2015a). Nevertheless, MNDAA troops continue to clash with Myanmar military forces near Laukkai (Myanmar Peace Monitor, 2015a).
In addition to domestic clashes, the Kokang conflict has strained relations between Myanmar and China. Several errant shells from the Myanmar Armed Forces aimed at Kokang rebels have landed in Chinese territory in the last several months. Two shells landed in China in March -one which killed five Chinese farmers. China immediately summoned Myanmar Ambassador Thit Linn Ohn to demand an investigation into the incident and urged Myanmar to take more precautionary measures (Reuters, 2015a). The Myanmar government has since officially apologized for the incident (The Diplomat, 2015). However, China complained on April 28 and May 20 that more Myanmar Army shells had fallen on Chinese territory (Reuters, 2015b and Irrawaddy, 2015f). China has also sent troops to the Sino-Myanmar border in an attempt to deter future cross-border incidents (South China Morning Post, 2015). 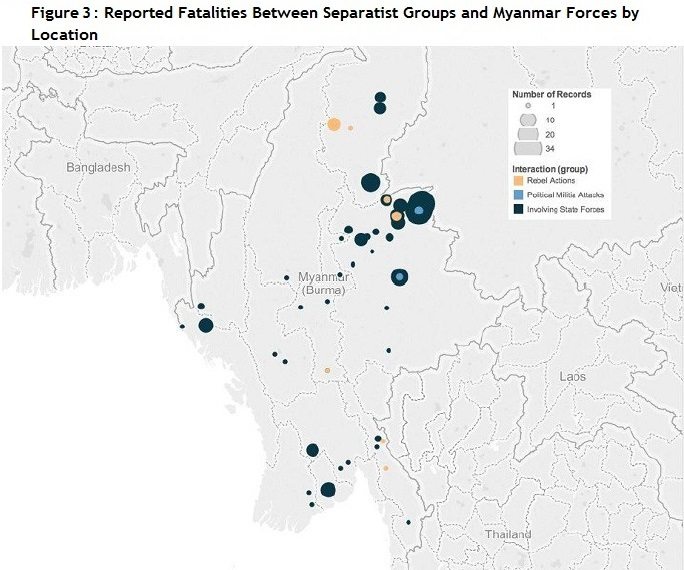 AA forces have engaged in five direct battles with Myanmar Armed Forces in Rakhine and Chin states since the beginning of March. According to the Myanmar military, AA forces in Chin state were in retreat on April 17 and five AA soldiers were captured in the battles in Rakhine. These clashes are believed to be the first time in a decade that the AA has fought Myanmar Armed Forces in its home state (Democratic Voice of Burma, 2015a & Mizzima, 2015b). News organization Burma News International believes these clashes are related to the movement of AA troops to the Bangladesh-Burma border and the increase in Myanmar military personnel in the region (Burma News International, 2015).
The Myanmar army and KIA forces clashed 24 times in the past three months in Kachin and Shan states, resulting in 60 fatalities. The Kachin Independence Organization (KIO), the political wing of the KIA, accused the Myanmar military of attempting to capture five KIA outposts from April 18-20 amid nationwide peace negotiations, causing hundreds of civilians to flee their homes (Democratic Voice of Burma, 2015b). Representatives from the KIO and the Myanmar government met on April 27 to discuss the fighting, but on May 6, fighting between the KIA and the Myanmar military continued (Democratic Voice of Burma, 2015b and Radio Free Asia).
This fighting signals an increase in violence between Myanmar Armed Forces and armed groups, despite ongoing ceasefire negotiations. More battles and fatalities have occurred in Myanmar from March 2015-May 2015 than during the previous four months. If this trend continues, the Myanmar peace processes could be jeopardized.