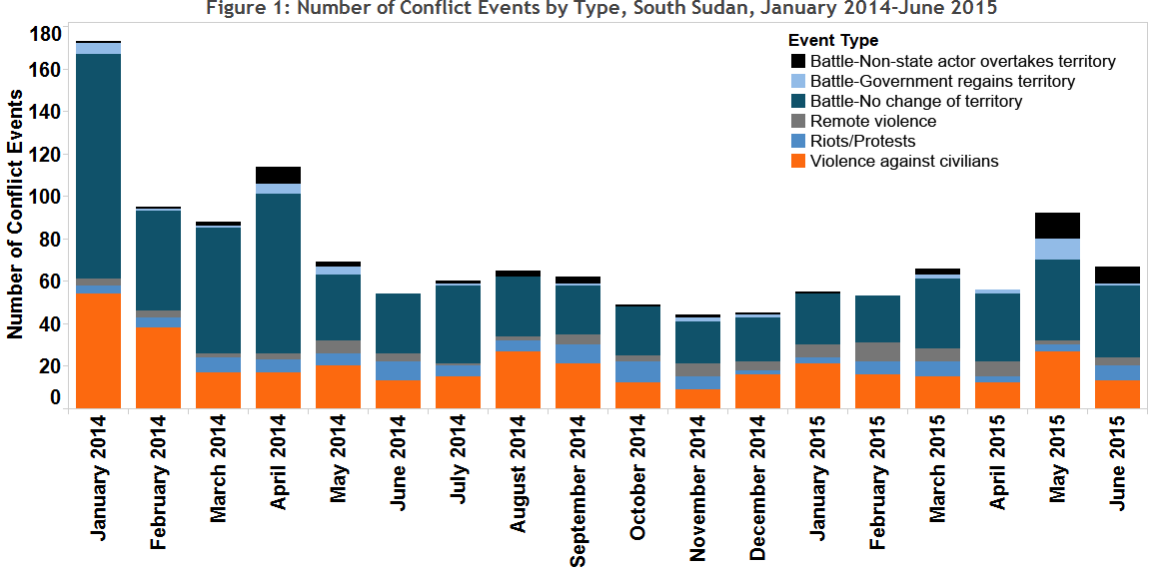 Levels of political conflict in South Sudan decreased in June 2015. Though the Inter-Governmental Authority on Development (IGAD), which has overseen multiple peace negotiations aimed at ending the 18-month conflict, may be tempted to refer to this drop in conflict as a sign of progress, the decrease is more likely due to the onset of the rainy season in South Sudan (Africa Confidential, 15 May 2015). This time last year, the beginning of the rainy season marked the adoption of a ceasefire and a decline in conflict between government and rebels as the rains restricted the movement of both people and vehicles (Copnall, 27 October 2014; ACLED, 2014). Just as the onset of the rainy season and the signing of the ceasefire last year did not signal a resolution of the underlying conflict between the ruling Sudanese People’s Liberation Army/Movement (SPLA/M)  and the rebel Sudanese People’s Liberation Army – In Opposition (SPLA-IO), the recent decrease in violence may not endure beyond October when the rains stop.
The last two months have left the government in a weakened position relative to rebel non-state actors. In May, 20% of battles resulted in non-state forces capturing territory with only 16.8% of battles resulting in the government retaking an area. In June, the figures became 18.6% and 2.3% respectively (see Figure 1). 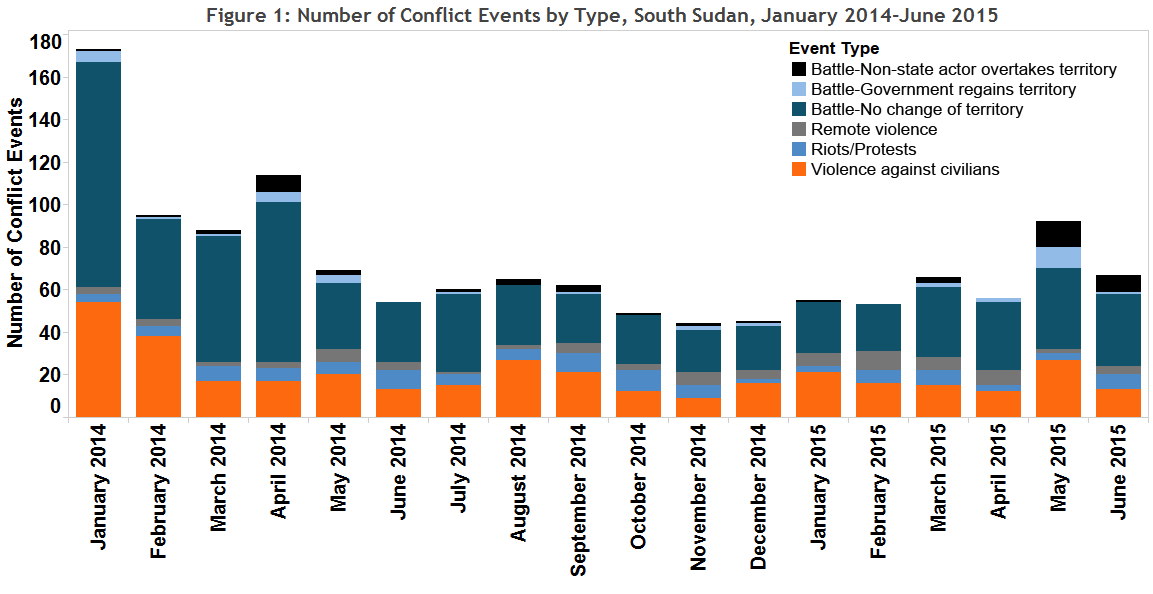 This surge in non-state victories, especially in Upper Nile state, is largely due to the activity of forces loyal to renegade SPLA commander Johnson Olony. Olony had previously rebelled against the government in 2013 due to the underrepresentation of his Shilluk community in the state government and the SPLA’s violent disarmament campaign against the Shilluk in 2010 (Small Arms Survey, 2015). Olony had fought for the government against the SPLA-IO at Wadakona, but started attacking state forces in May before formally claiming an alliance with SPLA-IO leader Riek Machar last week.
Olony’s defection took place after the resumption of a land conflict between the Shilluk and the Dinka in Akoka County resulted in the death of his second-in-command at the hands of a Dinka militia (Small Arms Survey, 2015; New Nation Reporter, 25 May 2015).
In response, the government has co-opted Dinka militias in its fight against Olony’s forces, capitalising on pre-existing ethnic tensions for recruitment. The government has also worked in tandem with Shilluk militias elsewhere in Upper Nile and Unity state to fight the SPLA-IO around Bentiu and the Paloch oilfields. This strategy shows that the conflict between President Kiir and Machar is not necessarily leading to different ethnic groups forming entrenched alliances with either the government or rebels but rather creating an environment of opportunism where armed ethnic militias can use the political conflict to loot and attack old enemies.