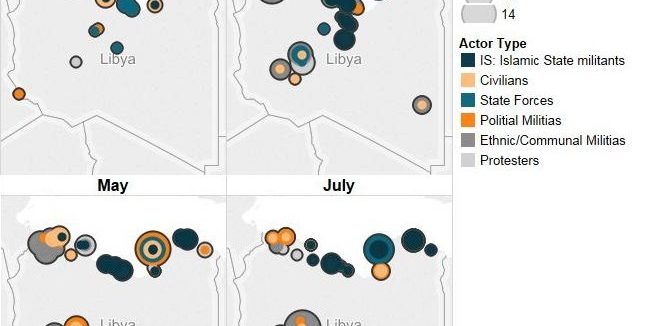 Conflict events in Libya were subject to a slight rise in July, although they steadily fell in the previous two months. Reported fatalities remained relatively constant with just over 250 deaths reported since May 2015. With overlapping conflicts occurring in distinct areas across Libya, this trend reflects stalemates on several battlefronts, including fighting in Benghazi as well as the subdued advance of the Islamic State due to confrontations with the Abu Salim Martyrs’ Brigade (ASMB). Furthermore, developments in the UNSMIL peace talks in Skhirat appear to have led to a diminishing role played by Operation Libya Dawn forces.
Fighting in Benghazi once again intensified as Islamic State militants join Ansar al-Sharia acting under the Benghazi Revolutionaries Shura Council (BRSC) to resist the Libya National Army offensive. Clashes continue to be concentrated in pockets of the city with prominent fighting taking place in the Leithi, Sabri and Buatni districts. Yet, the progress of General Khalifah Haftar’s forces remains stifled as the Special Forces soldiers sustain heavy losses in close combat. As the impasse carries on, morale within the army appears to be low, as Islamist snipers, booby-trapped houses and suicide bombers have impeded the efficiency of the operation (Libya Herald, 30 July 2015).
Despite the increased presence of Islamic State militants within Benghazi, their overall territorial influence both within Benghazi and within Libya as a country has diminished since March 2015 (see Figure 1). Whilst the overall activity of IS militants has steadily increased, their extension and reach has been limited. Islamic State fighters were operating over a larger territory in March, particularly concentrated in the central Sirte basin, and their substantial territorial gains looked to put the city of Misrata, the dominant player in the Libya Dawn coalition, under increased pressure. By July 2015 the Al-Qaeda affiliated ASMB re-established itself, driving IS militants out from their central position in Derna into the farming areas of Al-Fatayah and Korfat Al-Saba’h that lie to the east of the city. These clashes reflect broader ideological divisions between the Islamic State and Al Qaeda leadership across the MENA region. 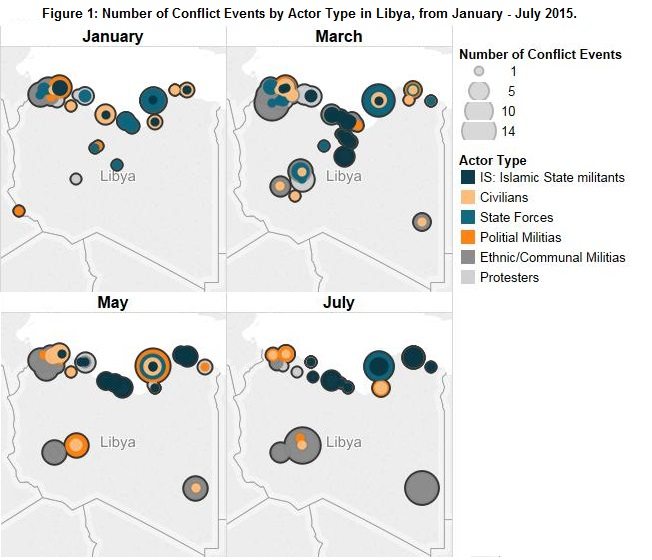 The ASMB assumed a role similar to the Al-Nusra Front by acting as a buffer between the Shura Council of Islamic Youth (Islamic State) and the military establishments in Libya. The latest bout of fighting started on the 10th June after accusations that Islamic State militants killed Naseer al-Akr. Associated Press (11 June 2015) cited Akr as the head of the Shura Council of Mujahideen in Derna, established in December 2014 as a response to the Operation Dignity offensive in Benghazi. Under this coalition is the ASMB. Ensuing clashes between the ASMB and SCIY saw ASMB regain control of the city of Derna, replacing black ISIS flags that hung around the city with the Libyan tricolour.
Explanations for the clashes have thus far centred upon the divergent ideologies between the two groups as well as a contest over power and resources (Associated Press, 10 June 2015). As a Salafi-nationalist group (The Red Team Analysis, 26 January 2015) the ASMB falls outside of the “global Jihadi milieu” according to Aaron Y. Zelin of the Washington Institute. Conversely, the Shura Council of Islamic Youth under the IS umbrella are orientated towards a global expansionist methodology. The nature of this ideological split is similar to that in Syria, where the Al-Nusra Front rejected allegiance to Abu Bakr al-Baghdadi’s caliphate, aligning itself with Al-Qaeda, prompting hostility between them and the Islamic State of Iraq and Syria (ISIS). In Libya, the group’s distinct histories, methodologies and strategies have meant that the ASMB is incompatible with the Islamic States’ co-optive strategies to absorb local militant groups. Furthermore, ASMB’s acquiescence to the orthodox political process has sought to antagonise the SCIY. A flashpoint of contestation is that ASMB provided shelter to Mustafa Abdel Jalil, the Chairman of the National Transitional Council (NTC) and that they operated under the remit of the Interior Minister during 2012 (The Maghrebi Note, 16 December 2014).
The Islamic State’s expanding activity occurred simultaneously as the stitching on the loosely structured alliances in Libya’s civil conflict started to fray. On 15th June, the Misrata-dominated Libya Dawn coalition fractured further after Saleh Badi announced the formation of the “Steadfastness Front”, charged with protecting Tripoli from brazen attacks. Some believed Badi was orchestrating a coup to counter the LNA reasserting power. As the GNC loses its grip over its allied forces, Salah Badi could be jockeying for political position and buy-in once Libya forms a transitional unity government. Others saw it as an attempt to stem the disintegration of Libya Dawn after it began unravelling when two of the most influential Misratan brigades – the Halboos and the 3rd Force – scaled down their operations and agreed peace deals with a number of pro-House of Representative groups, including Wersheffana elders in April (Libya Herald, 18 June 2015).
This set the ball in motion for a cascade of pro-Libya Dawn towns in the West to seek reconciliation with opposition groups or agreeing to allow the Libya National Army (LNA) to assume security in their regions (see Figure 4). On 12th July, these agreements culminated in the initial signing of the UNSMIL Peace Agreement to form a one-year government of national accord, albeit with the absence of representatives from the Tripoli-based parliament, the General National Congress (GNC).
From an initial assessment, the agreements made by fighters on the ground and the UN Peace Negotiations have significantly reduced communal violence between armed brigades supporting Operation Libya Dawn and Zintan and Wesheffana groups. Compared to March and April, the Western Nafusa mountain region south of Tripoli witnessed a significant drop in activity in July (see Figure 2). 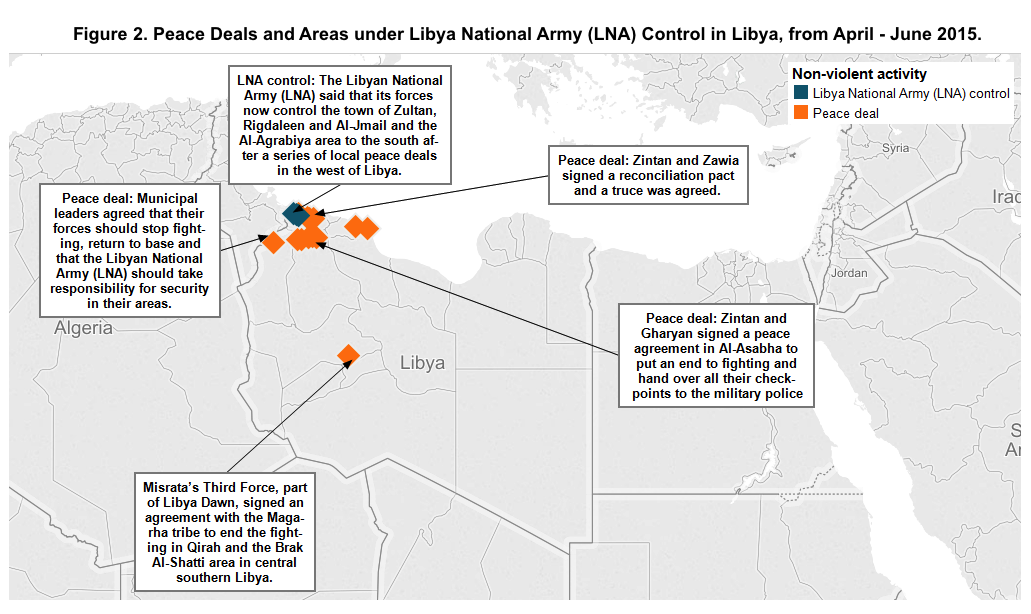 Instead, since the middle of July, ethnic tensions have grown in the southern towns of Sabha between Tabu-Tuareg groups and in Kufrah and Obari, where hostilities between Zwai and Tabu communities have once again erupted since March (see Figure 1). Although situated within the broader struggle for power in Libya with each side offering tacit support to rival parliaments, these clashes largely centre on economic competition, dominated by smuggling routes and distribution networks (International Business Times, 24 July 2015).