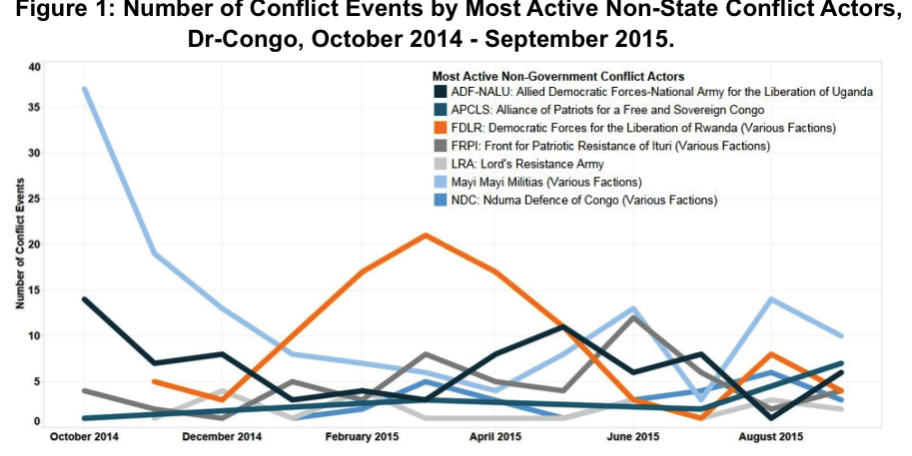 ACLED tracks a wide variety of non-governmental conflict actors in the Democratic Republic of Congo. Over the past year, the most dynamic among these conflict actors have seen significant fluctuations in their respective levels of activity. These include the APCLS, ADF-NALU, FDLR, various FRPI factions, the LRA, various Mayi Mayi militia factions, and various NDC factions. The Congolese military (FARDC) have engaged in offensives against many of these groups, specifically the ADF, APCLS, FDLR and FRPI sporadically over the last few months. Launched in February 2015, Operation Sokola 2 has been the most dramatic contest by FARDC forces against the FDLR (Radio Okapi, 28 February 2015).
In the renewed Operation Sokola 1 offensive against the ADF in March 2015 and the offensive against the FRPI in the Walendu Bindi area in May 2015, ADF and FRPI activity stayed relatively low at first. This suggests a strategy of evasion, followed by an increase over the following months (see Figure 1). In contrast, Operation Sokola 2 targets the FDLR, and saw an immediate and dramatic rise in activity by the FDLR due to increased clashes with FARDC forces (see Figure 1), as well as some cases of reprisals against civilians in the following months. These divergent tactical responses hold key insights into the geographical and political organisation of the rebel groups. Because the FDLR have deeper roots in their areas of operation—including settled dependents in the area — and suffer from internal divisions (IRIN, 31 October 2013) they are relatively less tactically flexible and mobile. This makes it easier for FARDC forces to engage them. In contrast, the ADF are much more willing and able to move, as their primary concerns in the DR-Congo are opportunistic, making use of gold mining and logging to support their activities, and have a better command and control structure which makes strategic withdrawals a more accessible tactical option (IRIN, 27 January 2014). 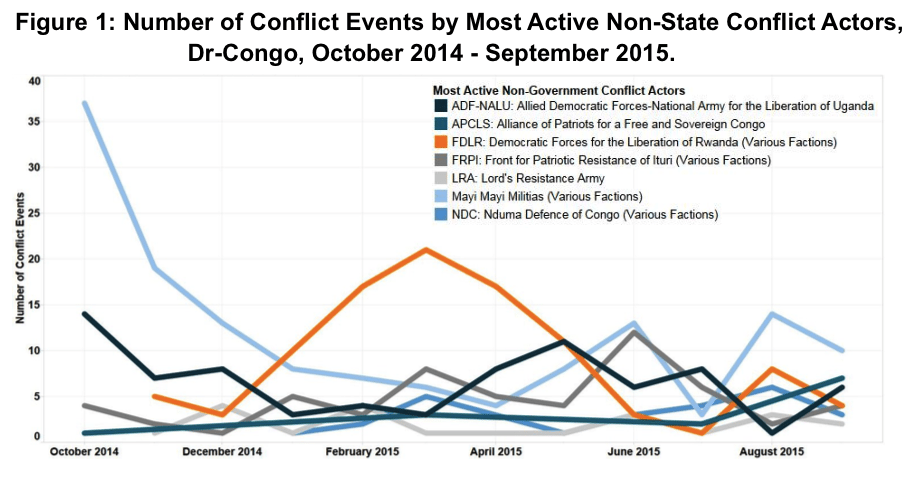 The most notable trend however is the significant fall in activity of the various Mayi Mayi factions (see Figure 1). The high number of events involving these groups in October 2014 was characterised by another dynamic, attributable to significant conflict between opposing Raïa Mutomboki Mayi Mayi militias that played out by the beginning of 2015. The activity during this period also included a number of attacks against civilians, which elicited responses from FARDC forces, leading to increased clashes with Mayi Mayi militias between October and December 2014.
Due to the number of different factions, it can be difficult to determine the cause of increased activity by Mayi Mayi militias. Some groups — such as the Bakata Katanga group — have since disappeared from the conflict scene; while the Raia Mutomboki subset of the Mayi Mayi militias continue to engage in a significant number of events, and many actions involve direct confrontations with the government.