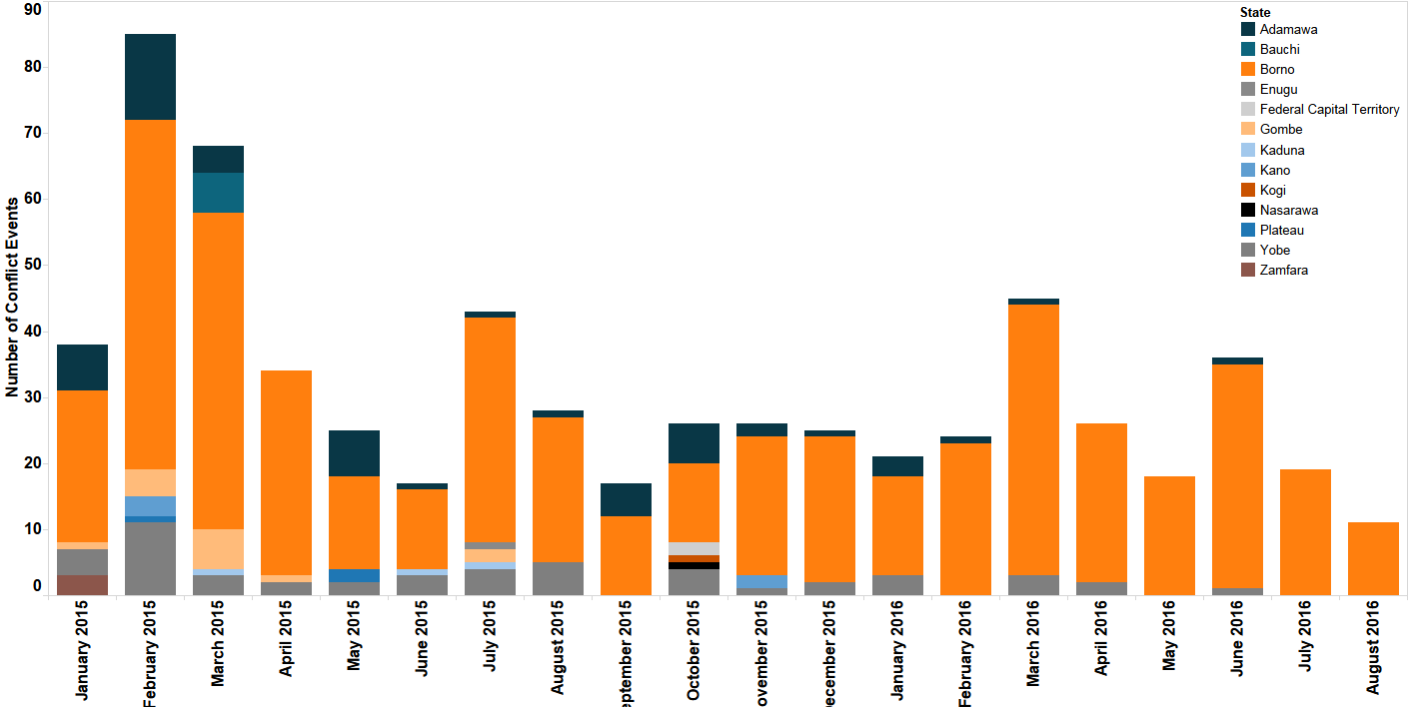 Conflict events in Nigeria declined in August, continuing a trend that has persisted since the Nigerian Army’s offensive against Boko Haram positions in March 2016. The March offensive was concentrated in the insurgent’s base in the Alagarno forest in Borno State (Sahara Reporters, 3 March 2016). Operations were also conducted in Adamawa, Taraba and Yobe state. During the offensive, the government destroyed numerous camps and recovered swaths of territory. The operation also accelerated the shrinking of Boko Haram’s area of operations to the point where the group is barely operational outside of Borno state, where its capacity is severely reduced (see Figure 1). 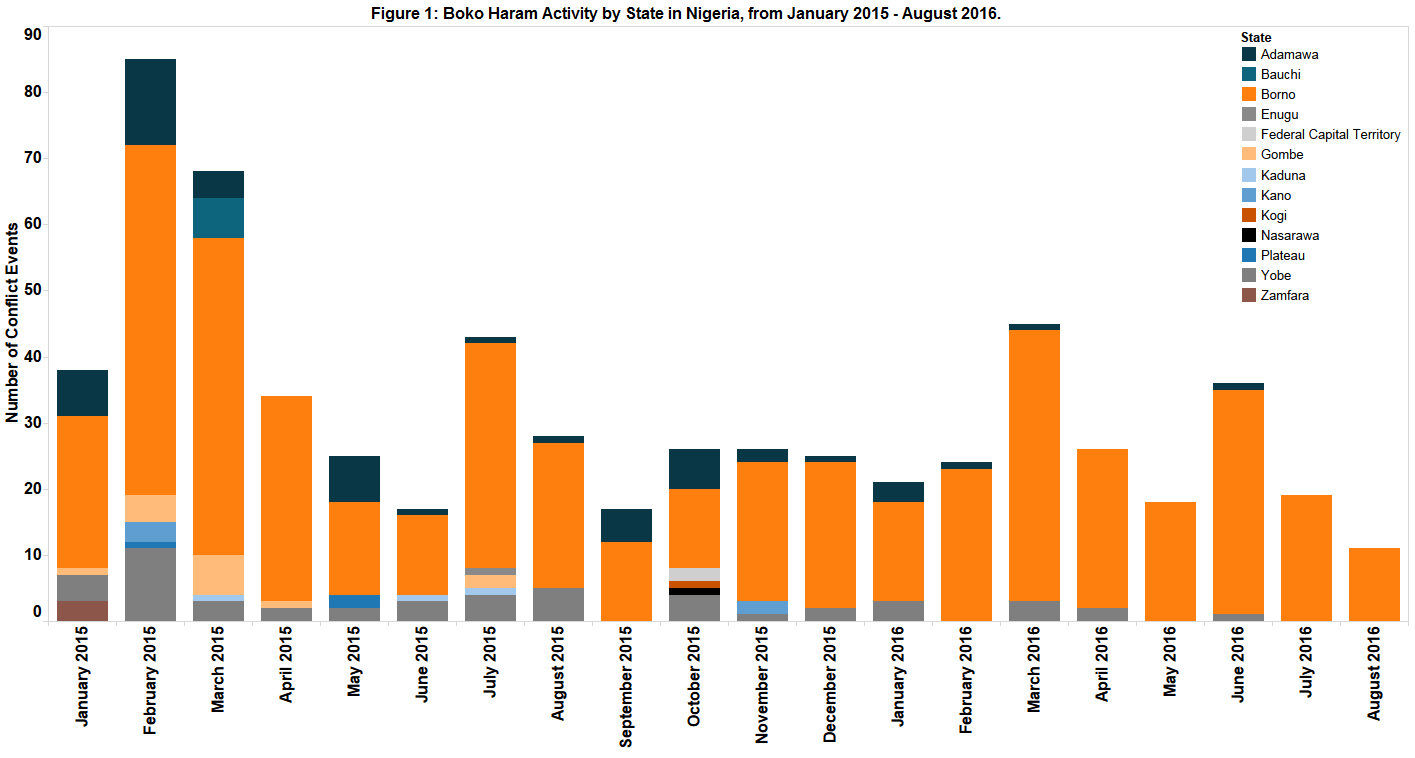 Buhari was elected on an anti-Boko Haram and anti-corruption platform, and the military’s success against the insurgents is likely to bolster support. However, new challenges to the regime have emerged in the South, driven in part by external pressures and domestic political competition. A series of bomb attacks on oil pipelines by a group known as the Niger Delta Avengers (NDA) has reduced oil production by over a million barrels a day (Africa Confidential, 24 June 2016). The group emerged in early 2016; at this time Buhari announced 70% reduction in funding for the $200 million a year amnesty program which offers ex-militants in the Niger Delta a monthly stipend and job training (Africa Confidential, 5 August 2016; BBC News, 2 June 2016). Fiscal constraints imposed by the tumbling price of oil, which accounts for the majority of government exports and revenue, prompted Buhari to consider phasing out the program entirely by 2018 (Vanguard, 23 January 2016).

In response, the NDA launched its bombing campaign with the expressed intent of ‘crippling’ the Nigerian economy (BBC News, 2 June 2016). These acts have been accompanied by a few instances of fatal violence against civilians and battles with state forces, though the insurgents have not seized any territory from the government (see Figure 2). 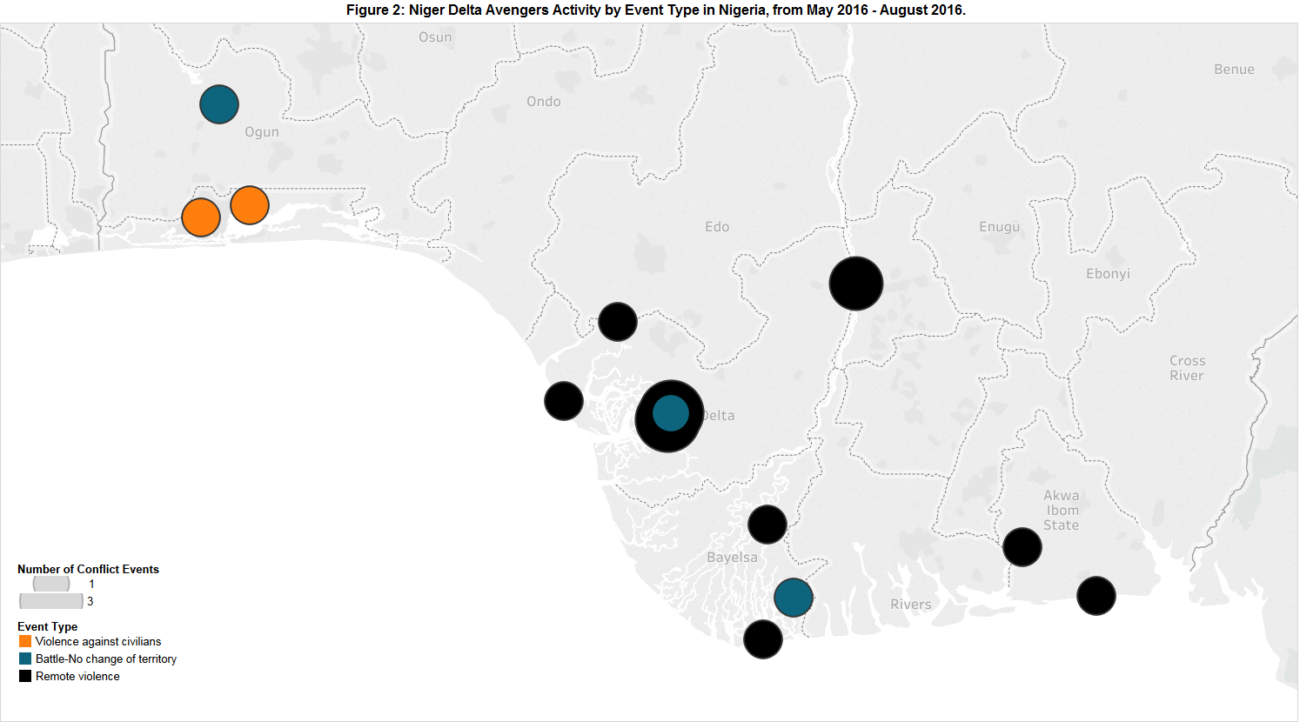 Buhari’s decision to phase out the amnesty payments made financial sense due to the country’s dire financial straits and the cost of the Boko Haram counter-insurgency. However, the decision was politically untenable due to the enduring role of identity politics on the Nigerian political system. Buhari, a Muslim from the far northern Katsina state, has been repeatedly accused of discrimination against the South. The Southern elite have accused Buhari of underrepresenting the South in key government appointments while simultaneously over representing those from the North-Western region (Guardian, 8 June 2016; Punch, 11 June 2016). Of the new appointments made during Buhari’s tenure, 70% have gone to fellow northerners.

As a result, Buhari’s government has come to be interpreted as a threat to southern elites. This is especially true for politicians tied to the previous regime of Goodluck Jonathan who are now the focus of Buhari’s anti-corruption drive (Africa Confidential, 15 April 2016). These anti-corruption drives have also targeted former Niger Delta militants such as Tompolo, a senior commander of the Movement for the Emancipation of the Niger Delta (MEND) (Africa Confidential, 19 February 2016).

The presence of dissatisfied elites and militants in the South, particularly the Delta, explains the geographical shift southwards in the main centres of conflict and protest in Nigeria. A comparison between the geographical spread of conflict in August 2015 and August 2016 shows that the while Borno remains the epicentre of political violence in Nigeria, conflict is becoming more prevalent in the Delta (see Figure 3). 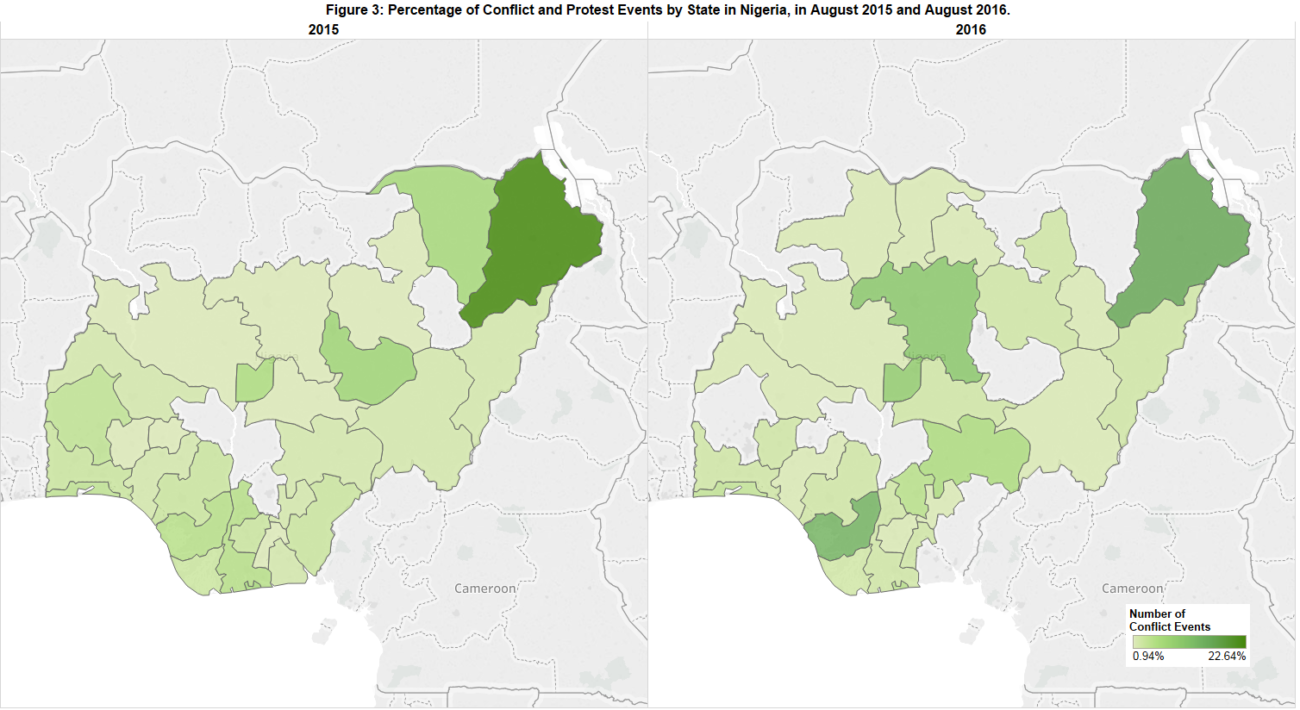 The grievances of the southern elites and militants also explain the limited nature of political violence in the    Delta. Both the elites and militants are demanding a larger portion of the state’s resources, either through the allocation of key positions in government or through amnesty payments. The Niger Delta Avengers campaign has proved successful with the government agreeing to resume amnesty payments (BBC News, 2 August 2016).

The success of the NDA’s insurgency may signal to other groups dissatisfied with their treatment by the government that violence can be an effective means of gaining additional resources from the state. Demonstrations by the separatist Movement for the Actualisation of Sovereign State of Biafra (MASSOB) have been violently repressed by state forces, resulting in casualties (Vanguard, 30 May 2016). Similarly, the leader of the Indigenous People of Biafra (IPOB) was imprisoned in late 2015 and has continued to speak out against the government’s treatment of the Delta region (Today, 4 September 2016).

A final group that may take note of the NDA’s success is the Islamic Movement of Nigeria (INM), a Shia religious organisation. After the group was accused of a failed    assassination attempt against the Nigerian Chief of Army Staff Lt. Gen. Tukur Buratai, clashes between the INM and the military left hundreds dead and the group’s leader, Sheikh Ibrahim Zakzaky, in police custody (ACLED Conflict Trends, January 2016). While subsequent demonstrations calling for Zakzaky’s release have been largely peaceful, the violent successes of the NDA in extracting concessions from the state may prompt INM, MASSOB and other groups to alter their tactics.

Roudabeh Kishi is the Director of Research & Innovation at ACLED. She oversees the quality, production, and coverage of all ACLED data across the globe; leads research and analysis across regional teams; aids in new partnerships with local sources and users; and supports the capacity building of NGOs and conflict observatories around the world. Dr. Kishi holds a PhD in Government and Politics from the University of Maryland with specializations in international relations and quantitative methodology. She is fluent in English, Farsi, and basic French.
9 September 2016
Share
TweetShare on Twitter Share on FacebookShare on Facebook Share on LinkedInShare on LinkedIn