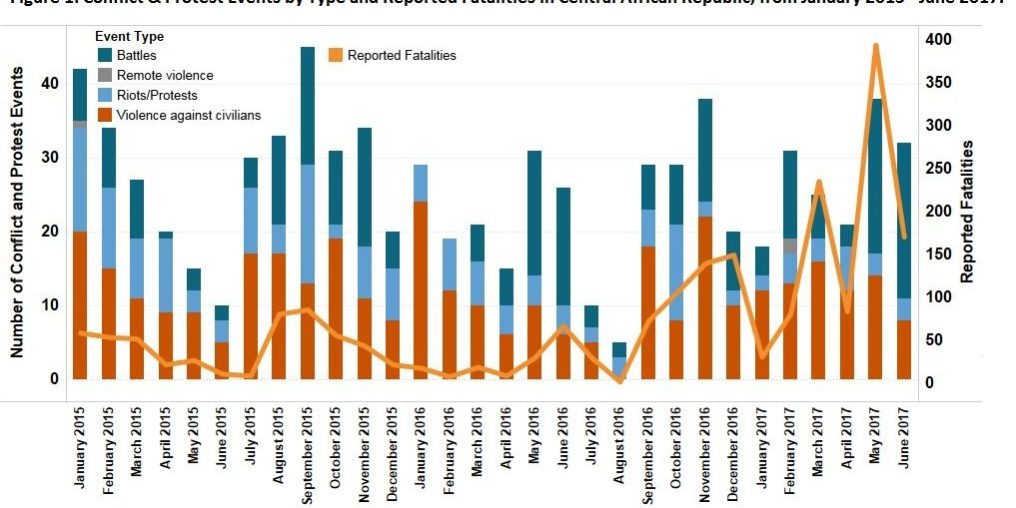 Despite relatively low levels of reported violence in Central African Republic (CAR) between 2015/2016 (see Figure 1), there is a growing rift between the ex-Seleka Union for Peace in the Central African Republic (UPC) and the Popular Front for the Renaissance of Central Africa (FPRC), which is allied with the Patriotic Movement for CAR (MPC). Starting in late 2016, this disjuncture has caused the return of significant instability over the past few months. At the same time, another militia, the Return, Reclamation and Rehabilitation (RRR) group, has become an important actor in the country’s west as a force opposed to the Anti-Balaka militias operating in the same areas. RRR was established in 2016 and is led by a Cameroonian known as Colonel Sidiki Abbas.

In terms of reported fatalities, May 2017 had levels of violence only surpassed during the heights of the conflict between the Seleka coalition and Anti-Balaka militias between December 2013 and February 2014 (see Figure 1). During that period, claims of ethnic cleansing by Anti-Balaka militias and clashes between them and the ex-Seleka factions (Reuters, 8 January 2015) were widespread. This instability prompted international interventions by France and several international organizations (Al Jazeera, 11 February 2014; The Guardian, 29 January  2014). 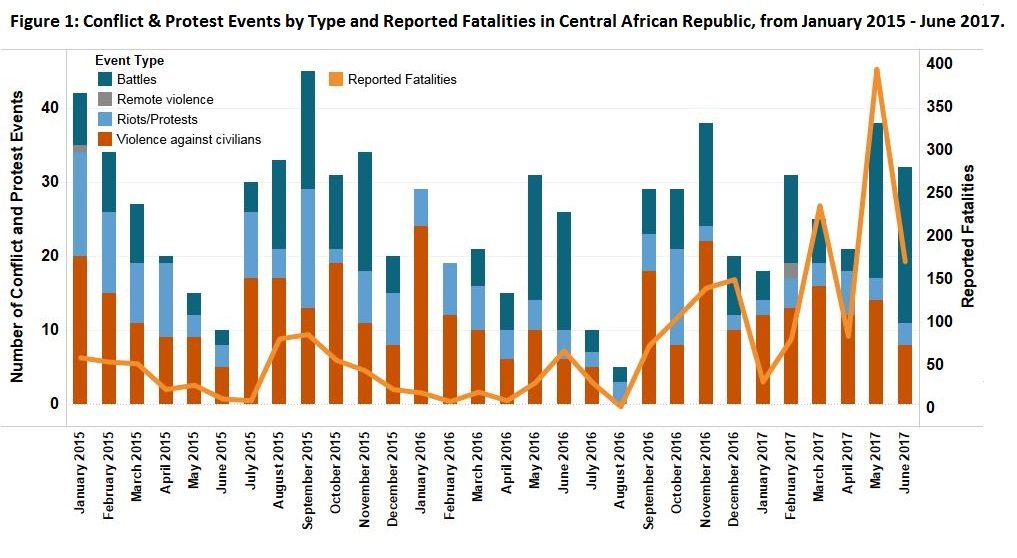 A major catalyst of the conflict between the UPC (plus their Anti-Balaka allies) and the FPRC-MPC was the declaration of an autonomous Republic of Logone by Noureddine Adam, the leader of the FPRC, in December 2015 (Reuters, 16 December 2015) with Bambari as its intended capital. However, this idea was condemned by the UPC’s leader Ali Darassa (Enough Project, 15 February 2017). Following a period of growing animosity, a fight over a goldmine in November 2016 touched off significant fighting between the two groups (Human Rights Watch, 16 February 2017), often resulting in substantial numbers of reported fatalities. Although the fighting grew steadily following this incident, it came to a head in February 2017 with threats by the FPRC-MPC that they would march on Bambari (IBT, 6 March 2017), the nominal headquarters of the UPC and residence of Darassa. This outcome was only averted by MINUSCA airstrikes on FPRC-MPC columns heading to the city (Newsweek, 13 February 2017) followed by the negotiated withdrawal of Darassa and allied Anti-Balaka leaders from the city (IBT, 6 March 2017). 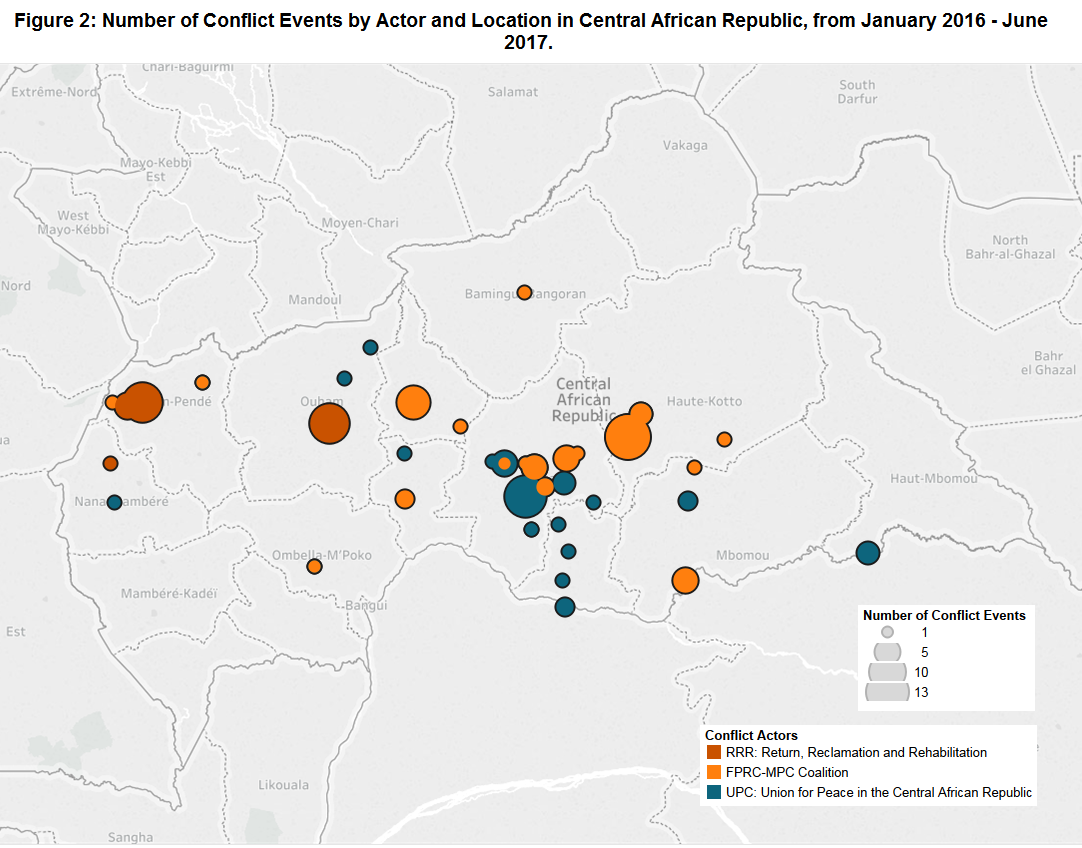 In the country’s western provinces, including Ouham, Ouham-Pendé and Nana-Mambéré, the RRR militia has become another notable source of violence in the country. This group was nominally formed as a counter-weight to the Anti-Balaka militias in these areas, with its leader Abass claiming that the RRR is the only group that stands in the way of continued attacks on Peuhl and Muslims in their areas of operation (Deutsche Welle, 30 April 2017). Although more active in reporting between September and November 2016, the group has continued to be involved in high fatality attacks in 2017. Their most recent attack in May 2017 involved an assault on the town of Niem (RJDH, 12 May 2017), situated near the Cameroonian border, causing 22 reported civilian fatalities. This type of event is indicative of the RRR’s overall activity, as 25 of the 33 events involving the group recorded since its creation in 2016 were events targeting civilians, while battles with Anti-Balaka groups accounted for the majority of the rest.

In terms of the geographic distribution of the violence carried out by these militias, Figure 2 shows the relatively clustered nature of the events. The conflict between the UPC and FPRC-MPC has largely taken place in the Ouaka region, and around Bambari specifically, with some spillover into neighbouring provinces. These battles fall along the rough line of territorial control between the two groups, with the provinces of Vakaga, Bamingui-Bangoran and Haute-Kotto representing the area controlled by the FPRC-MPC and the nominal territory of the Republic of Logone. The RRR meanwhile is engaged in battles and attacks across the western provinces of Ouham, Ouham-Pendé and Nana-Mambéré, although the majority of its activity is reported in and around towns and villages near the country’s porous border with Cameroon (see Figure 2).

The activity of these groups over the past year, and the general rising trend in fatalities to extraordinary levels as compared to the dynamics witnessed in 2015/2016, suggests that the UPC/FPRC-MPC conflict remains the main cause of insecurity in CAR. At the same time, sporadic attacks by RRR forces on civilians and clashes with Anti-Balaka in the west are also playing a supporting role. Together these dynamics suggest that long-term stability will not be secured until the central government can impose a semblance of order outside Bangui.