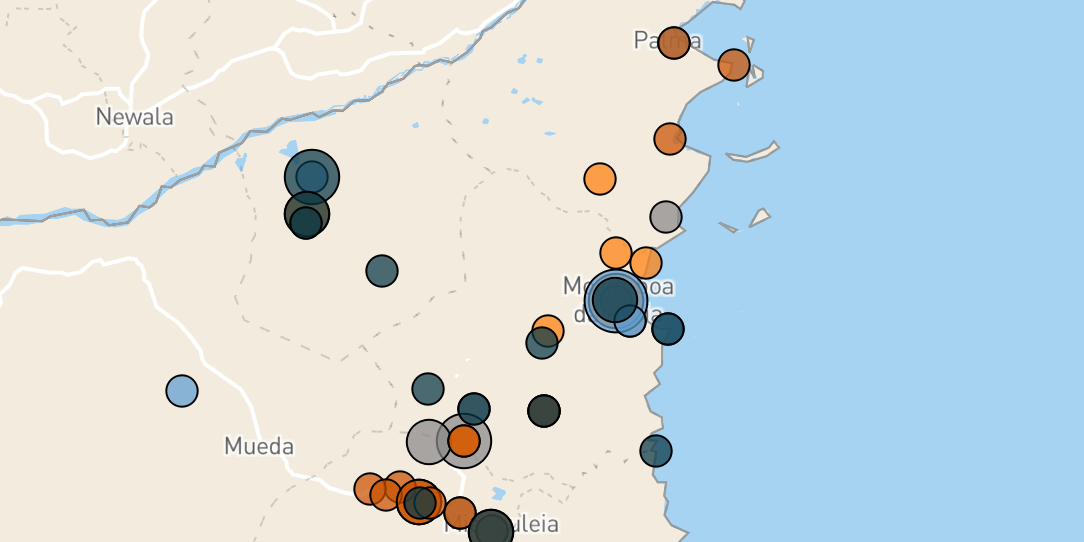 The Cabo Delgado insurgency combines extremist religious influences with local political grievances to create a potent threat to Mozambican state control over much of the province.

Cabo Delgado is characterized by widespread socio-economic deprivation, but poverty was even more acute in neighboring provinces Nampula and Niassa just before the start of the conflict in 2017, according to the most recent official data. For some time the insurgency was kept at a low level, but continued to build despite early government counterinsurgency efforts. In June 2019, the Islamic State-Central Africa Province (ISCAP) began claiming attacks in Mozambique, and by October both international interest and violence levels were climbing in Cabo Delgado. Today, the insurgency continues to grow stronger, while the Mozambican government continues to search for a way to reassert control.

Trends worth watching in the conflict include:

Activities in the previous week demonstrated that the insurgency continues apace, with momentum still in the insurgents’ favor. Insurgent attacks were similar in tactics and targets to those of the previous week. Since the late-April insurgent attack on the town of Metuge, capital of Metuge district, just 15 kilometers from the provincial capital of Pemba, was turned back by government forces supported by private military company Dyck Advisory Group, the insurgency has reverted back to organizing in smaller groups. ISCAP activity in Quissanga (see below) suggests insurgents are revisiting areas recently abandoned by the local populace. Insurgents also continue to target civilians viewed as collaborating with security forces.

Attacks largely followed the pattern set by the insurgency of targeting villages and avoiding direct confrontation with security forces. The insurgents’ activities still do not suggest that their immediate objective is to exert control over districts in Cabo Delgado, but instead to isolate areas and control important access roads. Five insurgent sub-groups are taking the lead in the execution of attacks, specifically in Mocimboa da Praia, Nangade, Muidumbe, and Quissanga as well as a group along the coast between Macomia and Mocimboa da Praia districts, in the areas between Mucojo, Quiterajo, and Ulo.

Insurgent movements indicate that attacking Mueda remains an insurgent objective, and there have been sustained movements within the Muidumbe district. No reported activity in Macomia district could indicate that this area is being used for logistical purposes, and serves as a buffer zone between the southern and northern fronts. Nangade’s isolated position in the north remains of concern, as it provides an ideal retreat and free movement zone for insurgents.

ISCAP claimed credit for two attacks shortly after they took place. In Quissanga district, ISCAP claimed credit for an attack on a government military base at Cagembe on 11 May and then took credit for an attack on Awasse, in Mocimboa da Praia district, on 12 May. The speed with which the credit claims arrived after the attacks shows that there is effective communication between the insurgency and IS, which suggests that the Islamic State is becoming institutionalized within the insurgency. Attacks on government infrastructure and communication towers reveal a high level of sophistication — insurgents even collapsed a bridge following the Awasse attacks. Reports differ on how the bridge was destroyed, but the potential for IED use remains a perpetual concern.

This week a series of attacks took place along the N380 road to the southwest and northeast of Mocimboa da Praia town. These attacks were well coordinated, and aimed at controlling the main points of entry into Mocimboa da Praia. Attacks were executed by insurgent groups splitting into smaller cells. Insurgents also cut fiber optic cables belonging to mobile operators Vodacom and Movitel, cutting mobile service in the district and severely curtailing the communication of tactical intelligence.

Attacks along the N380 included stops in Koko and Nacate (both in Macomia district), and Awasse (in Mocimboa da Praia district) on 12 May, during which insurgents destroyed houses and a hospital, and took a vehicle (Vatican News, 18 May 2020). The attack on the fiber optic cables took place in Ntotwe (Mocimboa da Praia district), where a Vodacom tower was also dropped on 14 May. Insurgents took brief control of Diaca (Mocimboa da Praia district) the day before, with no casualties reported and males being forced to join the group. ISCAP claimed credit for the attack at Awasse, during which insurgents seized a Chinese-made Yanjing Defender armored vehicle. Attacks were also reported in Nangade district targeting 1 de Maio and Chicuaia Nova on 11 May.

The Muidumbe district remained vulnerable to insurgent attacks. In addition to an attack at Muatide (located close to Mueda district), Miangalewa was again attacked during two separate incidents. On 11 May, five people were killed, and on 6 May, 10 people were beheaded. Following these attacks, residents stated that, though there was an FDS position in nearby Litamanda (in Macomia district), no responses by the Mozambique forces were forthcoming.

Cabo Delgado civilians express widespread dissatisfaction with FDS actions in the province, which, according to frequent and credible accusations, have included near-daily human rights abuses. Unconfirmed recent reports, for example, claimed numerous arrests of people arriving in Pemba and alleged that the government tortured the detainees. Mounting grievances against the FDS have the potential to create fertile ground for insurgency recruitment, specifically among the youth. The military remains the government’s main representative with civilians in the conflict area, leaving civilians little recourse in the face of FDS abuses.

Civilians have reported increased targeting of civilians carrying cash through FDS checkpoints in the past two weeks. There have been numerous reports of local traders being harassed and even detained by government forces as they attempt to move through the province. In the absence of an effective banking system — which has largely been destroyed by the insurgency — the local economy is reliant on cash-based trading. When pressed by local media on the increased scrutiny of traders carrying cash, military officials claimed it was part of an effort to deny financing to the insurgency. But government intervention that upsets the local informal economy on which so many rely may accelerate feelings of marginalization among civilians. Some of that marginalization shone through on 16 May, when a protest was held outside the FDS barracks in Palma in response to accusations of security force human right abuses while enforcing COVID-19 measures.

Alleged successes claimed by the government had little impact on insurgents’ capacity and capability. Interior Minister Amade Miquidade announced that a total of 50 insurgents were killed in two FDS operations (DW, 15 May 2020). Miquidade claimed that an operation on the road that connects Chinda and Mbau, in Mocimboa da Praia district, killed 42 insurgents, and that another eight were killed in an operation in Quissanga. Prime Minister Carlos Agostinho do Rosário also explained in Parliament that the government is “re-dimensioning” its action against insurgents by adopting a holistic policy approach of military action, development projects and improved regional and international information sharing (Jornal Domingo, 16 May 2020).

On 5 May, a passenger bus was attacked in Manica province, followed by an 11 May attack at Mutindiri, in Sofala province’s Chibabava district, near the Manica border. This left six people injured. On 17 May, an armed assailant killed one person and seriously injured three others in an attack on three buses on the main north-south highway (EN1) in Nhamatanda district, Sofala province (Club of Mozambique, 17 May 2020).

These attacks are attributed to the Renamo Military Junta. The Military Junta opposes the peace deal between Renamo and the Mozambican government and, in an attempt to scuttle the deal and remove Renamo leader Ossufo Momade from power, have executed intermittent attacks in Renamo base areas.

Collaboration between the groups in Sofala and Cabo Delgado is unlikely in the future, as the insurgencies operate in different regions and with different objectives. Conflict between the two groups is also unlikely as there is presently no contest for geographical encroachment on the areas of presence and execution of attacks. 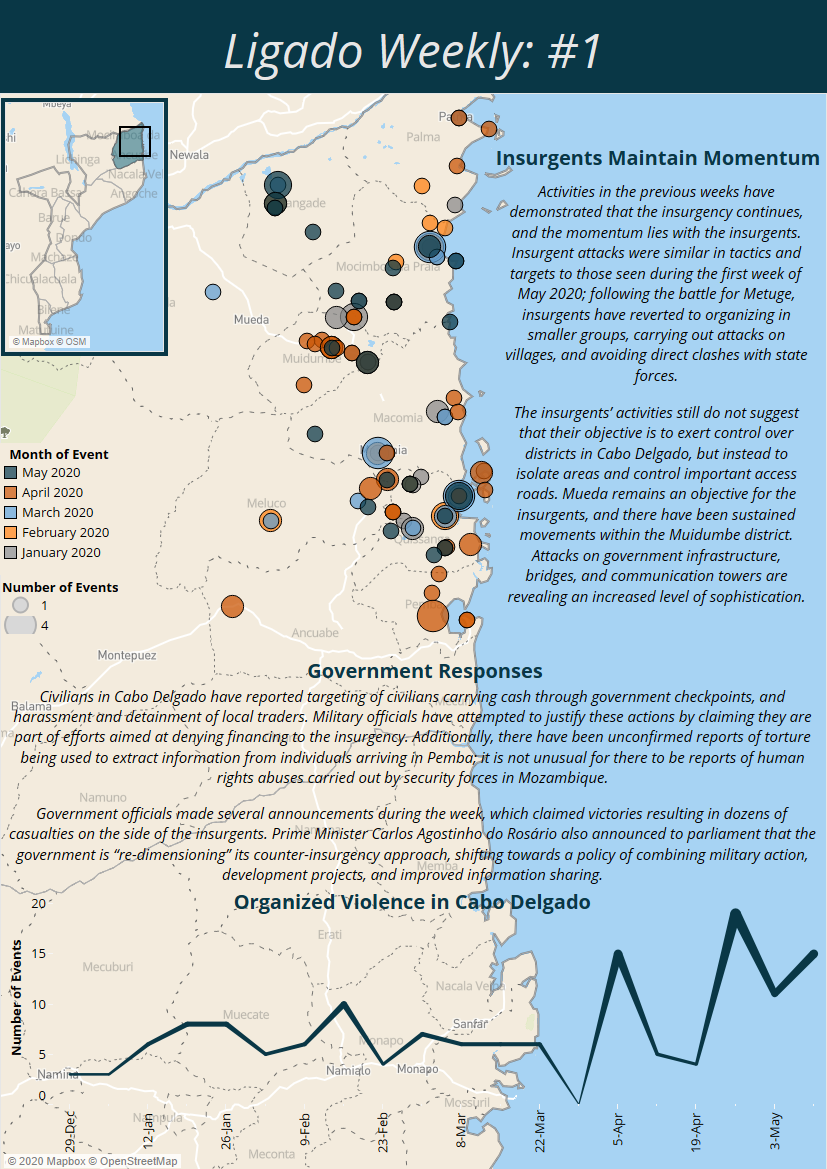