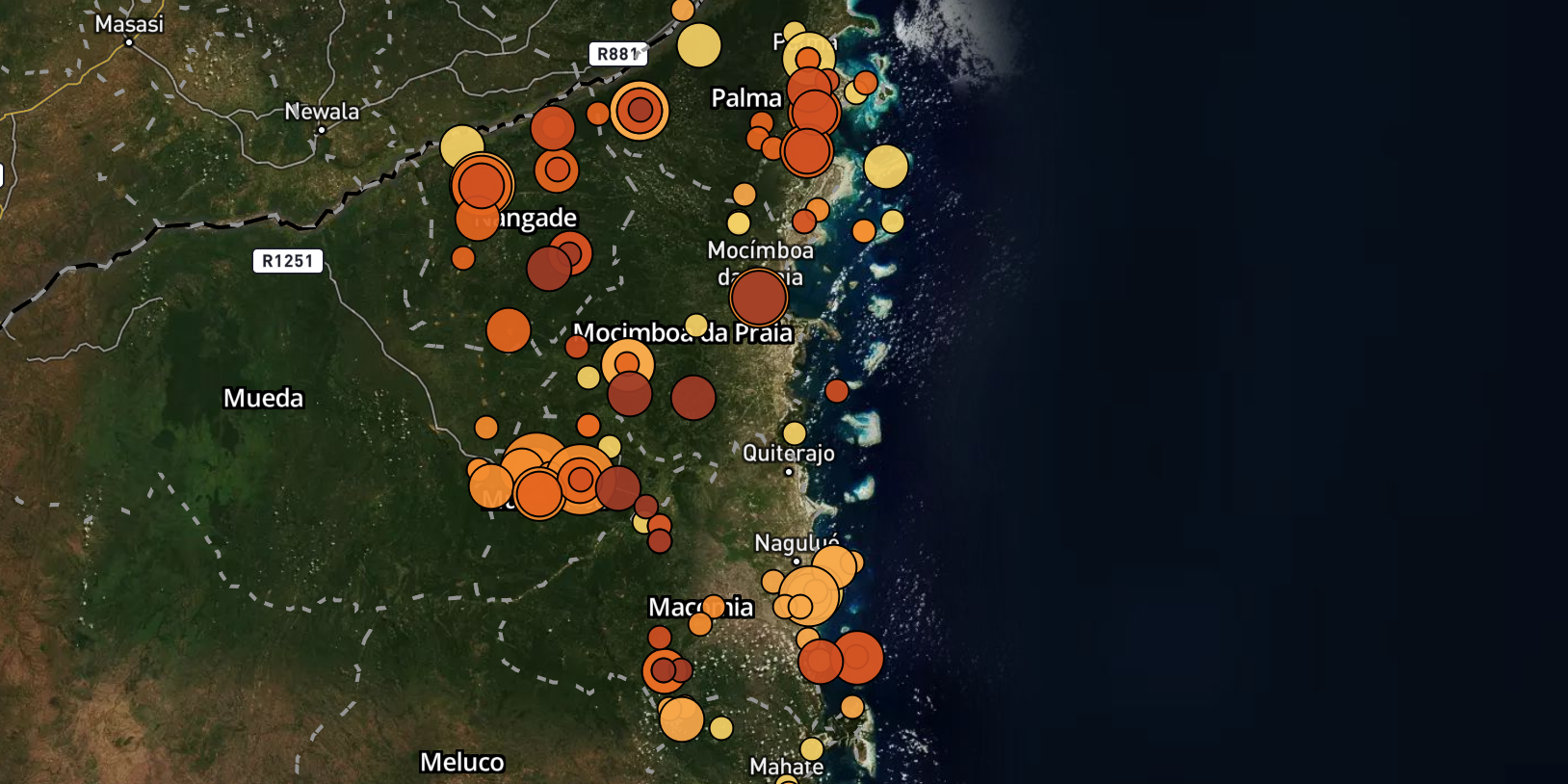 The first reports of major insurgent resistance to the government’s ongoing offensive came in last week, beginning with an insurgent attack on government forces in Roma, Mocimboa da Praia district, on 16 February. Sporadic shooting began early that morning, growing into a heavy firefight that continued until noon. A video purporting to be of the aftermath of the fight showed a Mozambican police Casspir armored personnel carrier that had taken significant small arms fire and been hit by a rocket propelled grenade round that failed to explode.  Insurgents withdrew after looting part of the village. Many civilians living in the cropland to the west of Roma fled, fearing that insurgents would return. No casualty estimates for the battle are available.

Also on 16 February, insurgents attacked government forces in Xitaxi, Muidumbe district, stealing food and military supplies. No one was killed. One member of the government security forces was injured in the fighting.

On 19 February, insurgents attacked the village of Quionga in northern Palma district near the Tanzanian border. According to a source quoted by Pinnacle News, 30 insurgents were involved in the attack and the raiders remained in the town until the next morning. Insurgents killed four people in Quionga, burned homes — including that of the head of the Quionga administrative post — and looted food in the village. Insurgents returned to Quionga the night of 20 February but were turned away by government security forces. According to one source, the insurgents withdrew north, toward the Tanzanian border.

Insurgents also released more hostages last week in an attempt to further reduce the strain on their food resources. In addition to the five girls who arrived in Macomia town two weeks ago, last week two young men arrived in Ibo district after having been prisoners of the insurgents for a long time, Pinnacle News reported.

Food shortages continue to be a crisis in Palma, as the relief convoy missions of early February have not continued. There were over 50 trucks waiting in Nangade late last week, unable or unwilling to complete their trips to Palma due to security concerns and rain that has made the road treacherous. Troops and equipment that was being used earlier in the month to escort convoys to Palma have now apparently been diverted for use elsewhere in the conflict.

General Bertolino Capitine, the deputy chief of staff of Mozambique’s military, began last week to appear in the media as a personality in his own right. Lusa covered his speech to soldiers deployed in Macomia, after which he told reporters that cooperation between security forces and Cabo Delgado civilians was a prerequisite for government victory. Then, on 19 February, Capitine’s interview became part of a glossy video released by the military that introduced Capitine as a man of the people focused on winning the conflict in Cabo Delgado.

The press rollout for Capitine is notable because it comes at a time of confusion over who will lead the government security effort in Cabo Delgado going forward. In January, Mozambican president Filipe Nyusi shifted control of government forces in the province from the police, under police chief Bernardino Rafael, to the military. He appointed General Eugénio Mussa as both the new military chief of staff and commander of government forces in Mueda, making Mussa the de facto theater commander. Nyusi appointed Capitine as deputy chief of staff at the same time. Mussa, however, died in early February of an undisclosed illness. No replacement has been named.

Uniformed Mozambican security force leaders rarely speak to the press. Indeed, when Mussa’s statements first appeared in the media in early January, before his new appointment had been announced, observers interpreted it as a sign that he was taking on an important new role in the Cabo Delgado conflict. Capitine’s position is more complicated than Mussa’s was, as he is a former Renamo guerilla and some members of Frelimo will likely be wary of turning significant de facto power over to someone of his background. However, it seems as though an effort is being made to position Capitine as a worthy successor to Mussa.

Both domestic and international audiences are closely following how the military succession will play out. With government forces in the midst of major offensive operations in Cabo Delgado, it is important that there is clarity about the structure atop the chain of command. If the government’s goal is still to unify its police and military efforts under one military commander, it will have to be clear who that commander is. From an international perspective, Mussa was seen as a key figure in coordinating military cooperation between Mozambique and Portugal. With Mussa dead, some in the Portuguese military are reportedly uneasy about how a promised mission to train Mozambican soldiers in counterterrorism techniques will go forward. No final decision on the mission has been made yet, although technical teams are actively working out the details. If the question of military leadership is settled soon, it may help smooth the way for Portuguese military assistance.

A new United Nations Office for the Coordination of Humanitarian Affairs (OCHA) report put the number of people displaced in northern Mozambique at 668,000 as of the end of 2020. 68,000 people were displaced in the month of December alone. OCHA also estimates that, across Cabo Delgado, Niassa, and Nampula provinces, 950,000 people are suffering severe food insecurity, 665,000 of them in Cabo Delgado itself. Since over 90% of displaced people (over 600,000) are staying in host communities rather than housed in resettlement centers, food and other resource pressures extend to host families as well as displaced people. Cholera cases are also on the rise, particularly among displaced people.

The massive mismatch between the number of displaced people and the government resources available to house and feed them drew harsh criticism of the government from civil society figures last week. Analysts with the Observatório do Meio Rural and Amnesty International decried the lack of resources being devoted to basic humanitarian relief, while sociologist Moisés Mabunda questioned the apparent lack of long-term planning for how displaced civilians might be resettled. Cabo Delgado provincial secretary of state Armindo Ngunga suggested that displaced people would likely drive long-term planning themselves, since he expects that most of them will not choose to return to the villages they fled but will instead become integrated into the communities in which they are now living.

Publishing criticism of government policies within Mozambique may become riskier going forward, as a proposed new media law would severely restrict press freedom. The Media Institute of Southern Africa (MISA) has sounded the alarm about the proposed law, which would allow the government to prosecute journalists for defaming the president and would limit the number of Mozambicans that could work for foreign news outlets to two. The law would also ban foreign broadcast media, such as RTP and Deutsche Welle, from the country and prevent Mozambican media from reproducing foreign news content. MISA and other civil society advocates believe the law to be unconstitutional.

Whether or not the law comes into effect and passes judicial muster, the government is clearly intent on making foreign media coverage of Mozambique more difficult. Tom Bowker, editor of Cabo Ligado partner Zitamar News, was expelled from Mozambique last week and banned from the country for 10 years on the order of Interior Minister Amade Miquidade. Ostensibly the expulsion is punishment for lack of clarity about Zitamar’s legal status, but Zitamar’s well-established legal structure and the fact he was given no opportunity to appeal against the decision make clear that the expulsion had other motivations. Zitamar continues to operate, and remains a valuable partner in Cabo Ligado.

On 16 February 2021, insurgents clashed with Mozambican Defense and Security Forces in Nanili village near Mueda (Macomia, Cabo Delgado). Civilians were attacked by insurgents. Food was seized. There was use of RPGs and machine guns. No fatalities or injuries reported. 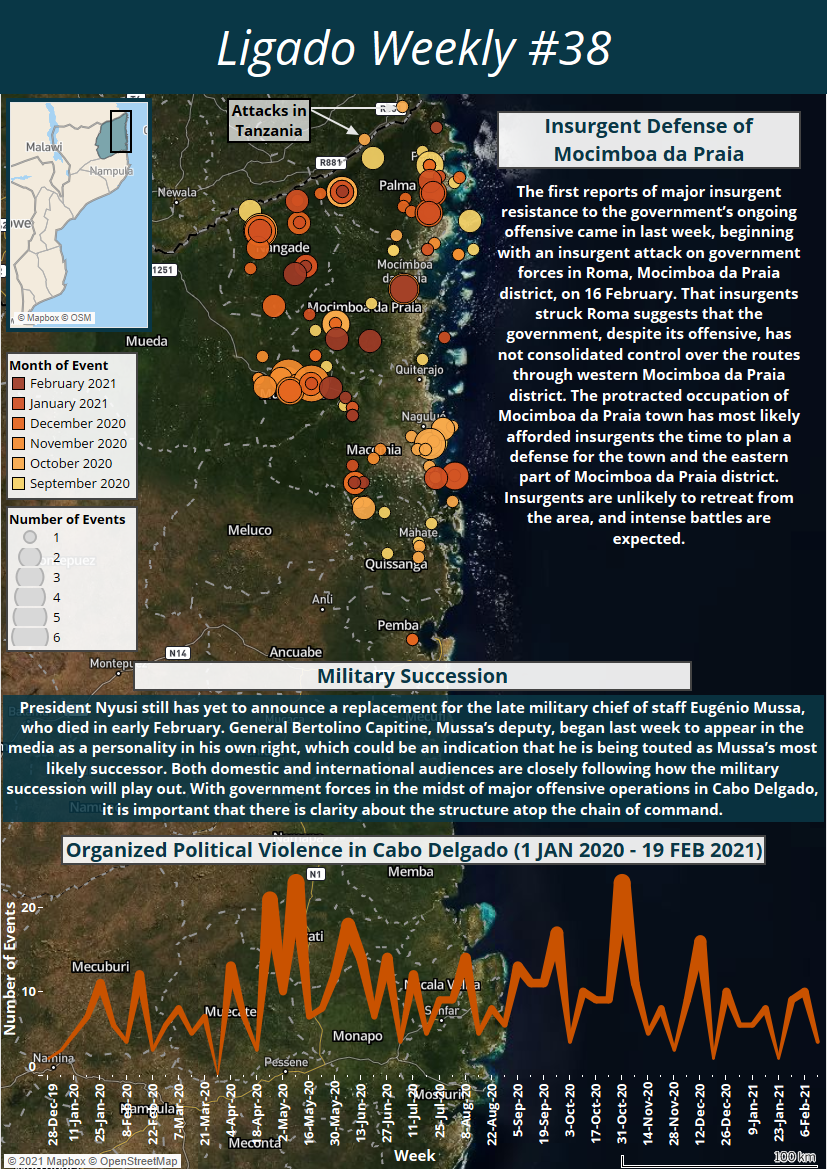