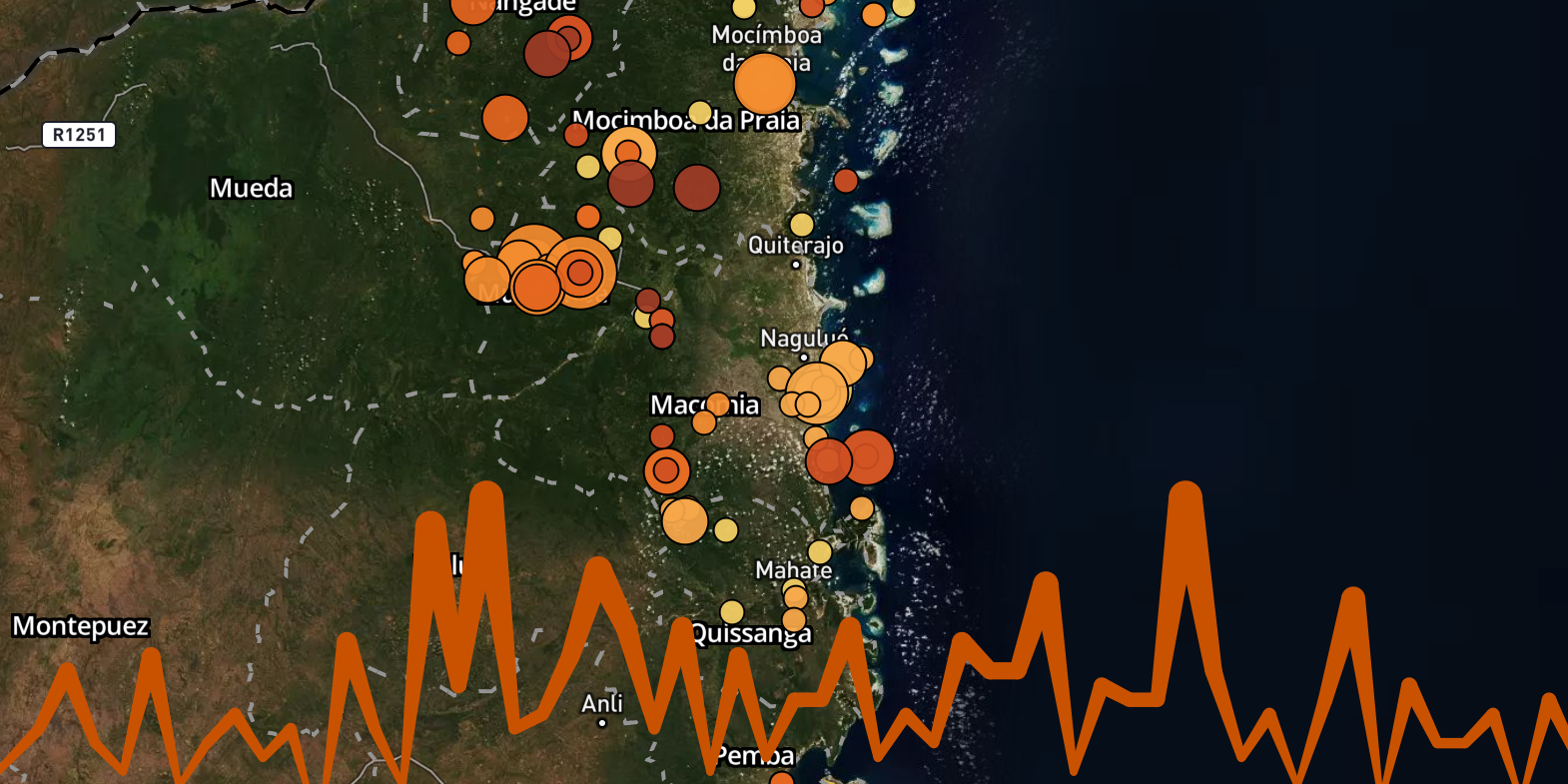 The Mozambican government continued its offensives last week, extending helicopter strikes to a wider swath of the area around the Messalo River. There is no indication yet, however, of whether the growing pace of strikes is shifting territorial control on the ground.

Helicopters supporting government forces struck insurgent positions near the Messalo river from at least 8 February through 11 February. The Messalo forms the southern border of Mocimboa da Praia district, and the area around it has been used by the insurgency as a base area dating back to 2018.  Reports differ as to whether the helicopter missions were run by Dyck Advisory Group, the Mozambican military, or the two working in concert, although Russian-made helicopters have been seen in Pemba, being flown by Mozambican pilots. The new helicopters and pilots are likely the result of the Mozambican military’s contract with South African arms dealer Paramount, which reportedly included both helicopters and pilot training, but it is not clear if they are yet involved in operations or are still in training.

Information about the details of the strikes is in short supply. However, multiple sources confirm that helicopters supporting government forces attacked the area around Mbau, in southern Mocimboa da Praia district, on 10 February. A single, well-placed source reported a series of helicopter strikes in the area where Mocimboa da Praia, Muidumbe, and Macomia districts meet. First, the source reported that government helicopters hit Xitaxi, a village in eastern Muidumbe district about 20 kilometers south of the Mocimboa da Praia border, on 8 February.  The next day, according to the source, there was an initial government attack on Mbau and neighboring Chinda, along with a strike on Miangalewa just to the south in Muidumbe district. Finally, the source reported that on 11 February there were helicopter strikes along the Mocimboa da Praia-Muidumbe border between Mbau and Chitunda. No casualty estimates are available for any of these attacks.

Reports also came through last week of an earlier insurgent attack. On 7 February, insurgents kidnapped two women near Lago Chai, a lake in northern Macomia district. The insurgents assaulted the victims and then let them go.

It is not common insurgent practice to let everyone in a group of abducted civilians go free, but supply problems may be preventing them from taking on new prisoners or even keeping their existing prisoners in captivity. Five girls who had been imprisoned by the group for nearly three years after insurgents captured them near the start of the conflict were set free about two weeks ago. Last week, they arrived in Macomia town, saying that insurgents were offering to release hostages in an attempt to stretch their limited supplies further. The girls reported having to cook and transport food for insurgent fighters during their time in captivity. They were held in bases near the Messalo River, where insurgents covered their roofs with leaves and grass to avoid detection by government helicopters. The insurgent leaders, according to the girls, were Mozambicans, including some from Macomia district.

One of the most steadfast and effective advocates for Cabo Delgado civilians has left Mozambique as part of an ecclesiastic reshuffle. Bishop Luiz Fernando Lisboa was, until last week, the leader of the Catholic Diocese of Pemba, which extends across Cabo Delgado. In his time there, he was vocal in his criticism of the Mozambican government’s approach to the conflict and active in organizing relief for displaced civilians. His exit leaves Mozambique with fewer major  institutions willing to publicly challenge the Nyusi administration — unless the new temporary Bishop of Pemba, António Juliasse Sandramo, can fill Lisboa’s shoes.

The Catholic Church in Cabo Delgado, under Lisboa’s direction, has been involved in the humanitarian response to the Cabo Delgado conflict since the first displaced civilians reached Pemba. The Church found housing for the displaced and kept records of who was living where so that the government and aid agencies would be able to reach them as well. Caritas, a major Catholic aid agency, has been heavily involved in distributing aid in Cabo Delgado. Church institutions also remained active in the conflict zone for far longer than most other non-governmental organizations, often running major security risks to do so.

At the same time, Lisboa was outspoken in criticizing the Mozambican government’s “lack of transparency” about both the origins of the conflict and the government’s response to it. While the government has repeatedly suggested that the Cabo Delgado insurgency is the result of foreign influence, Lisboa characterized the conflict as the result of local grievances and even organized a statement by the Episcopal Conference of Mozambique — an organization of Catholic bishops in the country — declaring that the insurgency is homegrown.

There have been different interpretations of the Vatican’s choice to send Lisboa to his native Brazil, where he has been named Bishop of Cachoeiro de Itapemirim. The new role is ostensibly a promotion, as he was also named an Archbishop. However, going from rural Mozambique to rural Brazil is, as befits his title, more of a diagonal move in the Church hierarchy. What’s more, Lisboa himself made clear in an interview that he had no desire to leave Cabo Delgado. That has led to speculation that he was removed to protect him from growing threats from the Nyusi administration and its allies. The pressure grew so heavy that the Pope called Lisboa to express his support last August — a reminder of how displeased the Church would be if anything were to happen to Lisboa. Since then, however, public attacks on Lisboa have slowed, leading some to see Lisboa’s removal as more of a favor to Nyusi than a condemnation of him. Evidence of the Church’s approach to dealing with the Mozambican government will come from the statements of Bishop Sandramo and whoever replaces him as the long-term bishop of Pemba.

No hard evidence of casualties from the recent government airstrikes in Cabo Delgado has been presented, but the pro-government website Noticias de Defesa claimed that the helicopter operations killed six insurgent leaders, including a Tanzanian and two “Arabs.” Photos linked in the post purporting to be of the dead insurgent leaders are actually operations photos from last December.

However well the government’s efforts are proceeding from the air, they are undoubtedly moving slower on the ground. In addition to the rainy season that has made many roads difficult to travel, the government is now having trouble conscripting people with local knowledge for the military. State newspaper Notícias reported last week that only 6,294 young people from Cabo Delgado have been conscripted into the military in the current conscription period, which runs from the beginning of January to the end of February. The military’s target was to sign up 14,952 new soldiers from the province. The official in charge of the conscription drive blamed displacement and lax registration of displaced young people for the government’s inability to meet its goals.

Another reason young people might be reticent to join the military are ongoing rumors of corruption in the ranks. Those rumors grew last week, as the new newspaper Evidências accused both the military and the police of overpaying for food for security forces charged with protecting liquified natural gas (LNG) infrastructure in Cabo Delgado. The story is thinly-sourced with no clear paper trail, which suggests that it may be more of a political smear against former interior minister and potential future presidential candidate Jaime Monteiro than a real scandal. However, the fact that Monteiro’s opponents would choose a story like this as an attack speaks to the popular perception of corruption levels in the security services.

However they are being fed, the Joint Task Force that provides security for Total’s LNG projects must now secure a 25 kilometer radius around Total’s construction site, per the terms of the latest security agreement between the French energy major and the Mozambican government. The agreement was concluded in late January, but Total CEO Patrick Pouyanne revealed the security cordon requirement last week. Pouyanne also said that there are currently about 1,000 workers at the site, but that there should be ten times as many in order for work on the project to be completed on time.

The United Nations Office on Drugs and Crime (UNODC)  announced last week  that it is setting up a maritime security office in Maputo for the purpose of coordinating efforts between Mozambique, South Africa, and Tanzania to increase security and reduce drug trafficking in the Mozambique Channel. The project already has a dedicated budget drawn from a range of funders including Japan, the US, the UK, France, Germany, and the European Union, indicating Western donors’ eagerness to fund security investments in Mozambique. UNODC country chief César Guedes has claimed that added anti-drug enforcement will improve conditions in the Cabo Delgado conflict, but, as discussed in the January Cabo Ligado monthly report, there is little evidence to back that claim up.

An international intervention more directly focused on the conflict is Portugal’s commitment to training Mozambican military members in counterterrorism operations. Portuguese Defense Minister João Cravinho told reporters that the training mission could be stood up as early as April. Cravinho later clarified that the trainers would be about 60 Portuguese special forces personnel, and that they will not be conducting their training in Cabo Delgado.South Africa is also directly involved in “assisting” the Mozambican government in the conflict in Cabo Delgado, according to South African Foreign Minister Naledi Pandor. She offered no details about the form or extent of the assistance, but emphasized that her government had been working with Portugal to help plan an assistance package from the Southern African Development Community (SADC). Pandor once again expressed her impatience with Maputo’s lack of cooperation in developing such a package, saying, “It’s a puzzle for us — why they don’t actually tell us what it is they need.” Pandor’s government will get a chance to ask again in person in May or June, when the SADC summit on the Cabo Delgado insurgency that had originally been planned for January takes place. The Mozambican Foreign Affairs Ministry announced the proposed new dates last week.

On 8 February 2021, members of the Mozambican Air Force carried out strikes against insurgents in Chinda (Mocimboa Da Praia, Cabo Delgado). No fatalities or injuries reported.

On 8 February 2021, members of the Mozambican Air Force carried out strikes against insurgents in Miangalewa (Muidumbe, Cabo Delgado). No fatalities or injuries reported.

On 8 February 2021, members of the Mozambican Air Force carried out strikes against insurgents in Mbau (Mocimboa Da Praia, Cabo Delgado). No fatalities or injuries reported.

On 10 February 2021, members of the Mozambican Air Force, along with members of Dyck Advisory Group, carried out strikes against insurgents around Mbau (Mocimboa Da Praia, Cabo Delgado). Reports indicate that there were several fatalities. 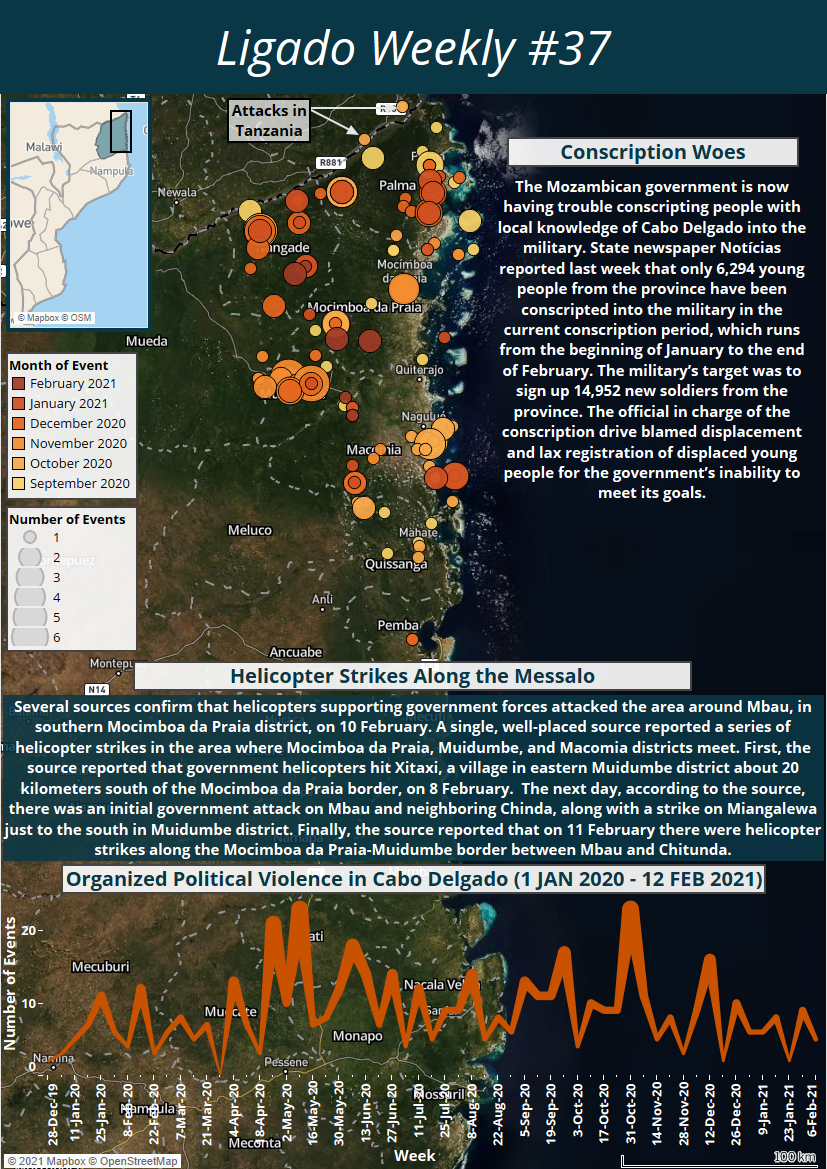