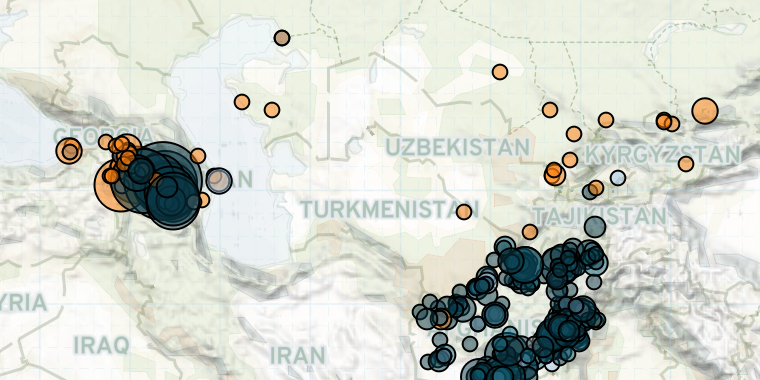 Last week in Central Asia and the Caucasus, conflict in Afghanistan resulted in a high number of civilian casualties, while the president and his long-standing rival finally signed a power-sharing agreement, prompting the Taliban to renew its call for prisoner releases. Demonstrations over socio-economic issues resurfaced in Uzbekistan and Kazakhstan following the partial removal of coronavirus restrictions, and a rare protest took place in Turkmenistan expressing criticism of the government in the wake of a hurricane in the country’s northeastern Lebap province. Lastly, ceasefire violations continued along the Azerbaijan-Armenia-Artsakh Lines of Contact.

Last week was particularly deadly for civilians in Afghanistan. On 12 May, 32 people were reportedly killed and more than 130 wounded in a suicide bombing that targeted the funeral of a pro-government militia commander in Nangarhar province. On the same day, three gunmen stormed the maternity ward of the Doctors Without Borders hospital in Dasht-e-Barchi, Kabul, reportedly killing 24 people, including infants and mothers in labor, and injuring more than 16. As Afghanistan’s former representative to the UN put it, last week was a reminder that “the entire cycle of life is being attacked – from cradle to grave” (Foreign Policy, 14 May 2020). While the Islamic State (IS) claimed responsibility for the first attack, the second attack has remained unclaimed. The Taliban has condemned both attacks, vehemently denying any involvement. Dasht-e-Barchi in Kabul is home to the minority Shiite Hazara community, a frequent target of IS in the past, and US officials have blamed the attack on IS militants (AP, 13 May 2020). Afghan officials, however, have insisted that the Taliban and its affiliates are responsible for both attacks. They argue that the Haqqani network, a close affiliate of the Taliban, is cooperating with IS (TOLO News, 13 May 2020). In the week prior to the two deadly attacks, Afghanistan’s intelligence agency announced the arrest of eight members of a network that included IS and Haqqani militants, which it blamed for recent attacks on Sikh worshippers (Reuters, 11 May 2020). In the wake of last week’s violence, Afghan President Ashraf Ghani has ordered the resumption of offensive operations against the Taliban and other insurgent groups (CNN, 12 May 2020).

At the same time, Ghani and his rival Abdullah Abdullah finally signed a power-sharing agreement last week, breaking eight months of political deadlock following a controversial presidential election marred by allegations of fraud and irregularities. The agreement stipulates that Ghani will stay on as the president, while Abdullah will choose 50% of the cabinet and chair the High Council for National Reconciliation, charged with leading peace negotiations with the Taliban, should they get underway (Al Jazeera, 17 May 2020). In reaction to the power-sharing agreement, a Taliban spokesman denounced “that which is taking place in Kabul is only a repetition of the past failed experiences” and stressed that “Afghan sides should focus on the real and sincere solution to the issue … The prisoners’ release process should be completed and the intra-Afghan negotiations should start” (Al Jazeera, 19 May 2020). The Afghan government has paused releasing Taliban prisoners since last week, demanding that the Taliban reduces violence and brings the total number of security personnel released up to 200. So far, Kabul has released approximately 1,000 Taliban prisoners, while the Taliban claims to have freed more than 260 captives. However, the government asserts that only about 100 of those released by the Taliban are members of Afghanistan’s security forces (TOLO News, 11 May 2020).

In Kazakhstan, the number of recorded demonstrations continued to increase as the government eased coronavirus restrictions (The Diplomat, 12 May 2020). Residents of Karazhar village in Aqmola region, Shieli town in Kyzylorda region, and Shymkent city organized protests demanding the removal of the remaining measures, especially roadblocks, as many need to travel to nearby towns for work. Similarly, small retail business owners protested in Almaty, Nur-Sultan, and Kostanay to call for the reopening of clothing bazaars. Paramedics and health workers continued their demonstrations in Shymkent, Aqmola, Nur-Sultan city, and Aktobe requesting extra pay during the coronavirus emergency. The gradual exit from quarantine also revived broader labor movements. On 11 May, municipal workers protested in Aktau, and on 16 May, employees of an oil company protested in Zhanaozen city demanding a pay raise and better working conditions, underscoring the issues suppressed due to the pandemic.

In Uzbekistan, the government has resumed its demolition of private property as part of country-wide infrastructure renewals, triggering protests. Such reconstruction projects particularly came under scrutiny recently, in the aftermath of a dam burst that damaged properties in Sirdaryo region during the first week of May (Eurasianet, 3 May 2020). On 14 March, a group of locals protested against the demolition of their garages in Tashkent city to make way for new houses. The shop owners of the market in Boysun town, Surkhandary region demonstrated after the district administration began work to demolish the market. In a separate development, unknown assailants attacked a journalist after she visited the administration of Quva district, Ferghana region to investigate the claims of a disabled woman who said she could not receive compensation after the demolition of her house (ACCA, 18 May 2020).

Since early May in Turkmenistan, heavy rains and a hurricane destroyed many houses in Lebap province. The destruction led hundreds of people to protest on 13 May – an exceptionally rare event for the region’s most closed state (Turkmen News, 14 May 2020). Victims of the disaster gathered in Turkmenabad to protest the lack of electricity, inoperative sewage system, and subsequent economic problems such as a food shortage. They also condemned the inaction of officials. The government has recently been in the spotlight for suspiciously claiming that Turkmenistan is the only coronavirus-free country in Central Asia, but the absence of independent media and the lack of government transparency has created a general distrust of official information.The heavy toll of the recent disaster has added to this distrust and, according to some critics, may lead to a change in the government (RFE/RL, 18 May 2020, 19 May 2020).

Ceasefire violations between Armenia and Azerbaijan continued at similar levels to the week prior, according to Azerbaijan’s Ministry of Defense (MoD), which reported 11 armed engagements on the Armenia-Azerbaijan Line of Contact (LoC) and 41 armed engagements on the Artsakh-Azerbaijan LoC. However, the conflict-affected civilians for the first time since late March (ACLED, 8 April 2020), with the Artsakh Ministry of Defense (MoD) reporting that on 13 May, large-caliber weapons fired from Azerbaijani military bases damaged a residential home near Berkaber village of Tavush region. No casualties were reported (Razminfo, 13 May 2020). The Artsakh MoD also documented 1,500 shots from Azerbaijani forces into Armenian positions and 120 ceasefire violations on the Artsakh-Azerbaijan LoC throughout the past week (Artsakh Republic Ministry of Defence, 16 May 2020).