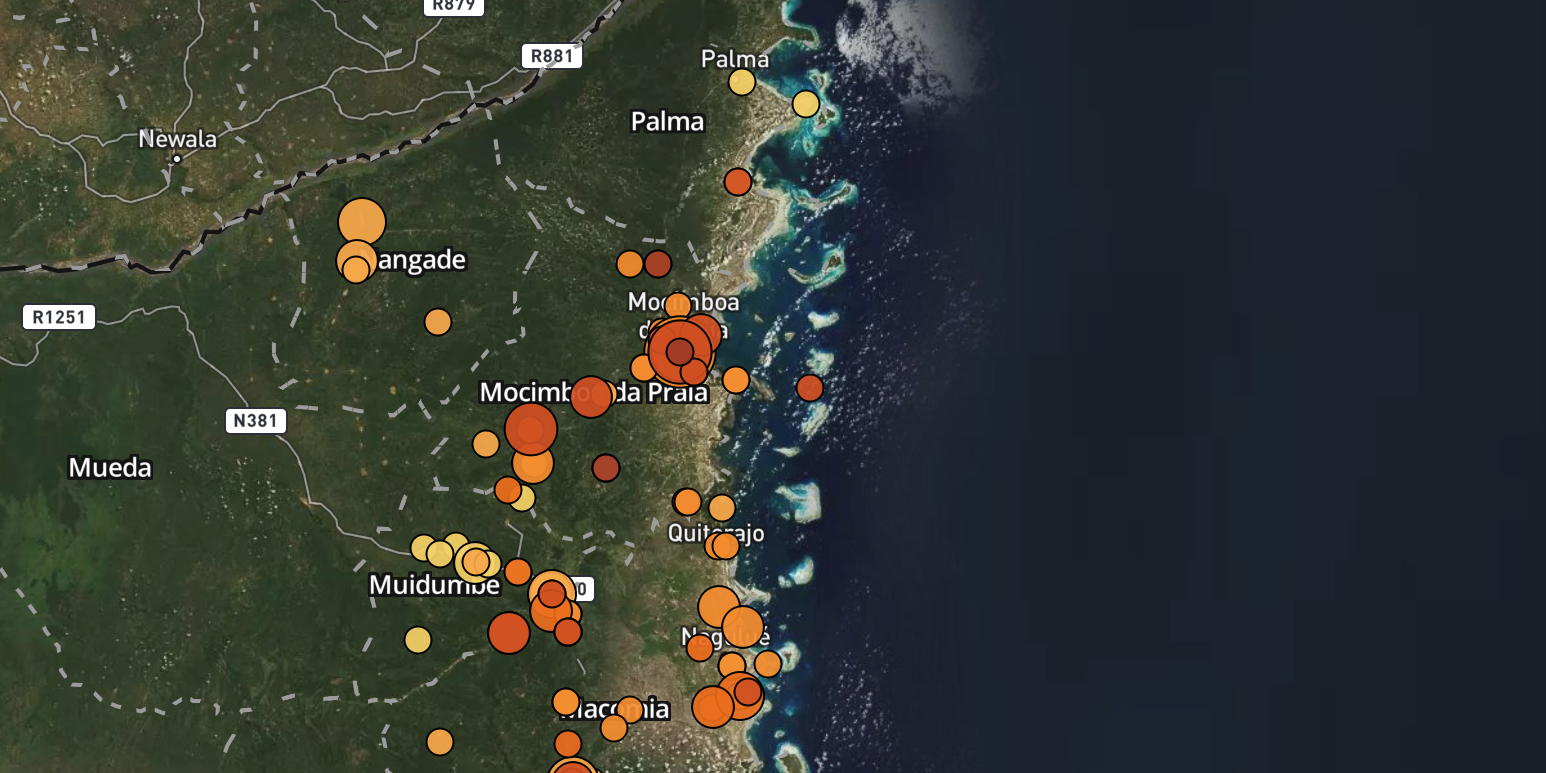 Operations by both insurgents and government forces picked up last week, although the expected battle for Mocímboa da Praia has not yet begun. Instead, insurgents continued to establish their reach in coastal Mocímboa da Praia district, while Mozambican troops amassed with their eyes on the district capital.

The same day, in Muambula, Muidumbe district, a young man, said to be a local leader of the insurgency, was arrested after local citizens turned him in, according to a Carta de Moçambique report. He had returned to the village on 31 August after some time away. After his arrest, he was taken to Mueda, where the government keeps prisoners in military custody.

Insurgents attacked Ilha Vamize, Palma district on 5 September after arriving from the mainland by motorboat. No one was killed in the attack, but insurgents burned three homes, looted solar panels, batteries, a boat, and other goods. Before returning to the mainland, insurgents told locals that they would attack Palma town in the coming days, although no such attack has yet materialized.

The same day, the Islamic State (IS) claimed that the group had killed 20 Tanzanian soldiers, captured four vehicles, and burned several others while fighting off an attack by Tanzanian forces in Mocimboa da Praia. A photograph that accompanied the claim in Amaq News Agency showed two Tanzanian drivers’ licenses, allegedly belonging to slain Tanzanian soldiers. The Tanzanian military officially denied that it had any troops in Mozambique, and the IS statement offered no evidence to back up the claim that the men whose licenses were pictured were anything but civilians. Tanzanian security forces have been conducting border operations north of the Rovuma since March, and their operations intensified in August. While there have been unverified rumors of Tanzanian military involvement in Cabo Delgado in the past, no information has emerged to lend credibility to the rumors. The lack of images of either the vehicles reportedly taken or uniformed soldiers reportedly killed certainly calls the details of this IS claim into question.

On 6 September, insurgents struck the village of Manica in Macomia district. No one was killed or kidnapped, but goats and other sources of food were stolen. Manica has been a frequent target of attacks, most recently in July when it was attacked three times and insurgents kidnapped 11 women from the village.

A Carta de Moçambique report seemed to confirm an earlier claim from the pro-government website Notícias de Defesa claiming that government soldiers took five insurgent checkpoints, destroyed 21 huts used by the insurgents, and killed nine insurgents in operations in the Mbau administrative post of southern Mocímboa da Praia district over the weekend of 26-29 August. The Carta report added that government forces captured two insurgents. Those operations, in combination with the troop movements north and west of Mocimboa da Praia town, suggest that the government is attempting to close off Mocimboa da Praia from all sides before attacking it.

The same Notícias de Defesa claim also trumpeted the “neutralization” — usually a euphemism for killing — of five insurgents, including one Abdula Saide Sumail and his wife. The report says that Sumail had confirmed under interrogation the deaths of two insurgent leaders during a government attack in Muidumbe district. The news about the killing of the two men, whose names Notícias de Defesa styled as “Djeroque” and “[Sheikh] Ibraim,” is largely accurate. Independent sources say both are dead, although Ibraim was killed in March in Mocímboa da Praia district rather than Muidumbe district. Notably, if Sumail and his wife have been killed after interrogation, the report amounts to a direct claim by a pro-government source of extrajudicial executions by government forces.

The week also brought some unmitigatedly good news: Two Brazilian nuns who had been missing since an insurgent attack on their Mocimboa da Praia parish on 5 August were reported safe by the Bishop of Pemba on 6 September. The sisters had been missing for 24 days. Some reports claim the nuns were kidnapped, but the bishop’s statement did not clarify what had happened while they were missing.

The Mozambican government formally launched the Northern Integrated Development Agency (ADIN) — its effort to address conflict drivers in Cabo Delgado through non-military means — on 31 August. Speaking at the opening ceremony in Pemba, President Nyusi said that ADIN’s goal is twofold: to provide humanitarian assistance to people affected by conflict and natural disasters in the provinces of Cabo Delgado, Niassa, and Nampula, and to support economic growth in those relatively impoverished northern provinces, with a particular focus on youth employment and growing small businesses.

Both of these goals could be put under the umbrella term of “social cohesion,” which has emerged as the watchword of international partners and domestic NGOs interested in promoting the government’s counterinsurgency effort without getting involved in the actual fighting. The concept, helpfully summarized in a US Agency for International Development fact sheet, is that improved “economic and social opportunities” will create “conditions for communities to co-exist peacefully and resolve tensions through non-violent means” — that is, people will no longer feel the need to join the insurgency to address their grievances.

As Emília Columbo, a non-resident senior associate at the Center for Strategic and International Studies’ Africa Program told Cabo Ligado, using ADIN as the main tool to address social cohesion is risky but promising. “If the program is quickly and transparently executed,” she said, “it has the potential to demonstrate governance, rebuild trust with the locals, and address drivers of this conflict.” On the other hand, “if this program fails and the locals perceive it as just another source of graft for Frelimo officials and their cronies, it risks worsening the situation and serving as evidence to justify the insurgency.”

ADIN’s transparency record remains to be seen, but it is already struggling to meet Columbo’s proviso that it must be quickly executed. In addition to only appearing nearly three years into the conflict, the development agency begins its life with only 5% of its promised funding on hand. Though ADIN was supposed to start with $383.8 million in its initial budget, and has received pledges of $763.6 million from outside donors, it only has $19 million currently in the bank. That money is earmarked for agriculture and fisheries, public health, and clean water investments across Cabo Delgado, Niassa, and Nampula provinces. All the development money will be welcome, but it is unlikely that investment at ADIN’s current funding level, spread across three provinces, will move the needle on civilian trust in the Mozambican government in a positive direction.

There is also a question of whether ADIN’s loftier development goals are realistic given the scale of humanitarian response it will be responsible for implementing. Mozambique’s Agriculture Minister, Celso Correia, announced at the ADIN launch event that the agency would take the lead on serving people displaced by the conflict, and promised to provide assistance to 70,000 families in the next three months. The needs of serving a displaced population that stands at over 250,000 and grows every day may outpace the budgetary and administrative capacity of the agency to engage in longer-term work. Correia himself, who is seen as one of Nyusi’s right hand men, will likely have to draw on his relationship with the president to ensure ADIN has the resources it needs if he is to deliver on the promises the both of them have made.

Displaced Cabo Delgado residents continue to arrive at sites on the edge of the conflict, often after experiencing violence directly and then undertaking harrowing journeys. In Pangane, Macomia district, sources report 20 boats on the shore left by refugees seeking shelter from the conflict, and people living in shacks with tarpaulin roofs. Relations between displaced people and government forces at Pangane are said to be good, with soldiers helping needy civilians when called upon. In Chiure district, things are more tense, with local officials questioning people claiming to be IDPs out of concern that locals are receiving aid fraudulently.

Bonuses promised to soldiers and health workers on hazardous duty in Cabo Delgado have not been paid. Deputy Finance Minister Carla Louveira said parliament has not yet appropriated the money, despite President Nyusi announcing the bonuses two months ago. The delay makes it more difficult for the military to staunch the flow of deserters from its ranks, but it may be a small salve to the Mozambican police, who two weeks ago were warned by their chief not to complain about being left out of the bonus scheme.

On the international front, Nyusi said at the ADIN opening ceremony that Mozambique will ask for foreign assistance in the conflict “if it’s necessary,” making it clear that he does not see foreign intervention as necessary yet. Sounding a similar note, South African Foreign Minister Naledi Pandor told parliament that South Africa “stands ready” to offer military support in Cabo Delgado, but that no intervention will happen without a request from the Mozambican government. The decision about formal international intervention in Cabo Delgado remains with the Nyusi government.

Also during his ADIN speech, Nyusi repeated his government’s line that the conflict zone is not closed to journalists, but that covering conflict is inherently dangerous and unpredictable. The statement followed Interior Minister Amade Miquidade’s invitation to journalists two weeks ago to cover the conflict “on the spot.” These nods to press openness bely the reality for journalists reporting on the conflict, who have frequently been the targets of state harassment. Most recently, Canal de Moçambique executives Fernando Veloso and Matias Gente have been charged with violating state secrecy for reporting on the government’s security arrangements with natural gas developers.

Around 31 August 2020, three beheaded bodied were found in the Nanjaua village. According to reports, Islamist insurgents were responsible.

On 1 September 2020, members of the FDS destroyed five control posts and 21 huts set up by members of an Islamist insurgent group in Mbau administrative post. Nine insurgents were reportedly killed.

On 1 September 2020, members of an Islamist insurgent group attacked Quelimane. Residents fled the village. No reports of fatalities and/or injuries.

On 5 September 2020, an Islamist insurgent group claimed to have killed 20 Tanzanian officers during a clash with the FDS forces and Tanzanian army in Mocimboa da Praia. According to the group, several vehicles were set on fire and four were seized together with weapons and ammunition. 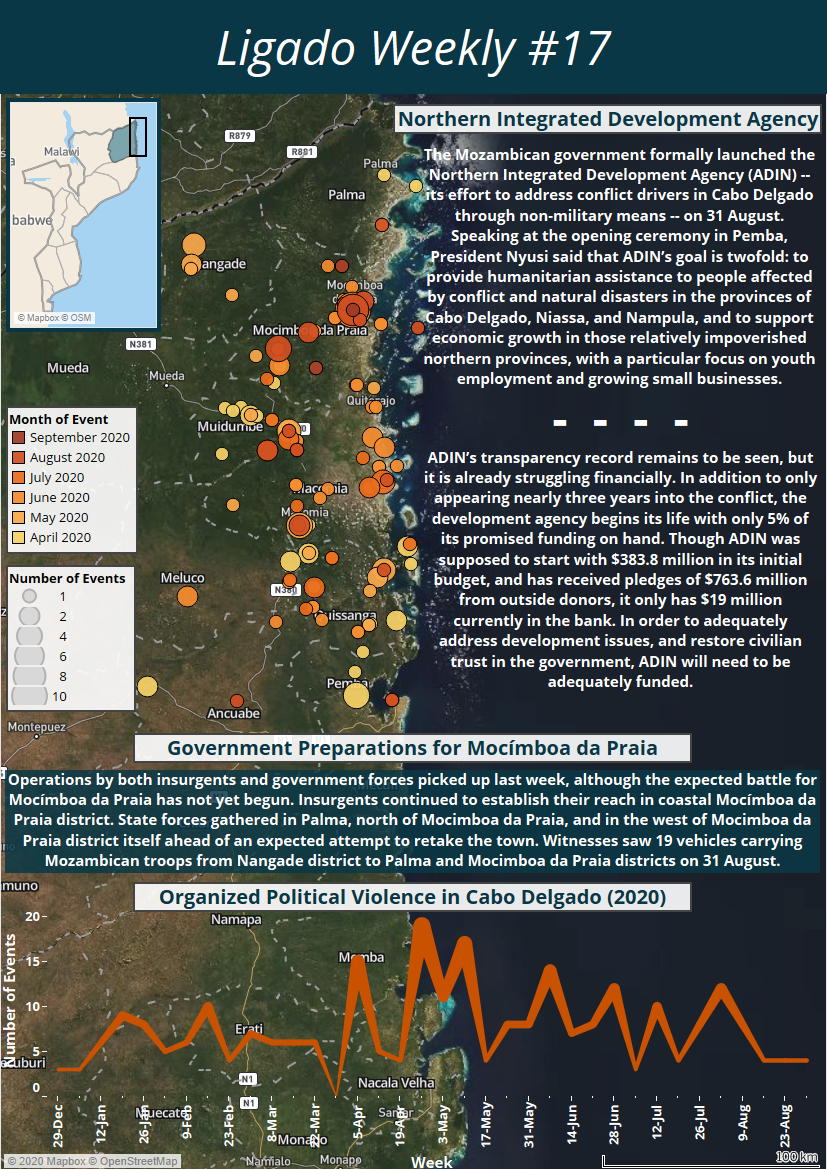