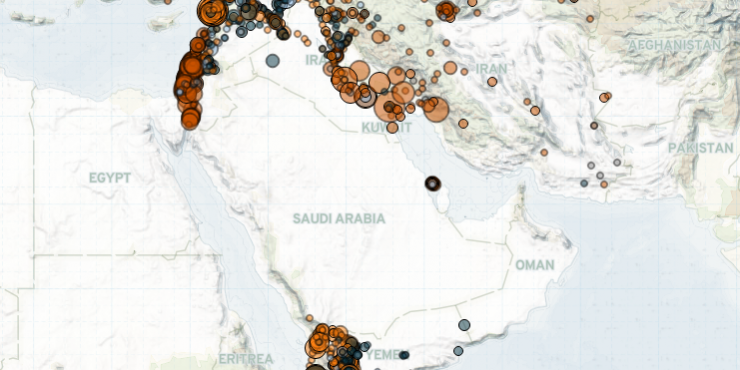 Last week in the Middle East, a truck bomb explosion reportedly led to the deaths of 18 civilians in Syria, while two former opposition figures were killed in an armed attack by unknown gunmen. Anti-government demonstrations were reported in Iraq, Turkey, and Iran. Demonstrations were also reported in Palestine following the fatal shooting of a Palestinian man by Isreali forces. Finally, in Yemen, Houthis made advances in Al Hodeidah, whereas pro-Hadi forces regained significant territory in Al Jawf.

In Syria, a truck bomb exploded near a bus station in the Turkish-controlled Al Bab city in eastern Aleppo, reportedly killing at least 18 civilians and wounding over 75 others (BBC, 7 October 2020). Residents of Al Bab later protested the deteriorating security conditions and demanded adequate protection measures and accountability. The city has been the scene of a string of attacks since Turkish forces captured it from the Islamic State (IS) in 2017 (Al Jazeera, 6 October 2020). Elsewhere in Syria, tensions between locals backed by the Russian-formed 5th Assault Corps and the regime in southern Syria continued, with clashes reported in Dar’a countryside. Furthermore, IED and small arms attacks by unidentified gunmen against former opposition rebels, who have accepted the reconciliation agreement with the regime and joined its ranks, continued throughout the province. In one instance, an attack resulted in the death of two former opposition figures.

In Iraq, a group of demonstrators carried pictures of those killed in mass demonstrations last year and chanted slogans against the government during the Shiite Arbaeen pilgrimage in Karbala. Clashes broke out after police forces were dispatched, reportedly leading to dozens of injuries among the demonstrators, pilgrims, and paramilitary groups guarding the shrines (Washington Post, 6 October 2020). This comes amid new demonstrations marking the one-year anniversary of anti-government demonstrations against corruption and for better services and jobs. Demonstrators have given Prime Minister Al Kazimi until 25 October to implement reforms and to meet their demands (Ahram Online, 6 October 2020). The recent demonstrations in Iraq are an indicator of the necessity for tangible reforms to stave off popular anger.

Meanwhile, in Turkey, several demonstrations were held against the detention of pro-Kurdish and left-leaning opposition party members — including members of the Socialist Party of the Oppressed (ESP) and Socialist Youth Associations Federation (SGDF) — on alleged terror-related charges. The Turkish government has also arrested 33 senior members of the pro-Kurdish Peoples’ Democratic Party (HDP) in the first 10 days of October (Morning Star, 12 October 2020). This comes after authorities ordered the arrest of 82 people in connection with demonstrations in 2014, which were sparked by the seizure of the Kurdish Syrian town of Kobane (Arab News, 25 September 2020). The prosecutor’s office has accused HDP of urging people to take part in the demonstrations, which reportedly led to 37 deaths. However, no explanation was provided as to why the arrest warrants have been issued six years after the alleged crimes (Washington Post, 25 September 2020). Human Rights Watch has criticized the recent wave of arrests as “part of the Turkish government’s policy to criminalize political opposition” (HRW, 2 October 2020).

In Iran, demonstrations broke out in Sistan Baluchestan province following reports that the Sunni Friday prayer Imam of Peshamag, Molavi Fazl al-Rahman Kouhi, was sentenced to over six years in prison. Demonstrators blocked roads using burning tires, but, despite the heavy presence of security forces, no arrests or clashes were reported. Kouhi was arrested in November 2019 after he criticized Iranian authorities for their heavy-handed response to the unrest over the surge in fuel prices, which left hundreds of people dead (Radio Farda, 15 December 2020). According to a United States Department of State report on religious freedom, Sunni clerics and congregants continue to face arrests, harassment, and discrimination in Iran (US Department of State, June 2019).

Elsewhere, in Palestine, a number of demonstrations were held following the Israeli army’s fatal shooting of a Palestinian student. The student was shot after he and two other people allegedly threw petrol bombs at Israeli soldiers in the occupied West Bank. The Israeli government has refused to release the body of the victim. This follows a recent policy change to not return the bodies of all Palestinians killed by Israeli forces; previously, only the bodies of armed Hamas members were retained (Al Jazeera, 9 October 2020). According to the Jerusalem Legal Aid and Human Rights Center, Israel has withheld the bodies of over 65 Palestinians since 2016 “under the pretext of being used as ‘bargaining chips’ in potential prisoner swaps” (JLAC, 22 June 2020).

Pro-Southern Transitional Council (STC) and pro-Hadi forces continued to clash east and north of Zinjibar, the capital of Abyan governorate, with no changes to the frontlines. The forces also clashed along the Abyan-Shabwah border after an alleged attempt to smuggle weapons by pro-STC forces was thwarted by pro-Hadi forces. Clashes broke out in Mahrah governorate between tribal militias at a major border crossing into Oman as the Saudi-led coalition and local security forces imposed increased security measures in the area. Additionally, a series of assassination attempts occurred in Aden, Taizz, and Hadramawt governorates as the security situation in areas under control of anti-Houthi forces remains precarious. Finally, the body of a prisoner of Houthi forces was returned to his family bearing significant signs of torture. He is the third prisoner of Houthi forces who was due for release in the UN-sponsored prisoner exchange agreement between pro-Hadi and Houthi forces to have died since its signing on 27 September. Such reports are likely to negatively affect the implementation of the agreement.

Finally, in Saudi Arabia, Houthi forces resumed attacking Saudi Arabia last week after no claimed missile or drone attacks were reported the week prior. On 4 October, Houthi forces reportedly shelled a border city in Jizan governorate causing damage, though no reports of injuries (Khabar Agency, 6 October 2020). This was followed by Saudi claims of interceptions of Houthi drones targeting Najran city on 6, 7, and 10 October (Arab News, 6 October 2020; Arab News, 10 October 2020). There were no reported injuries, deaths, or damage from the interceptions.