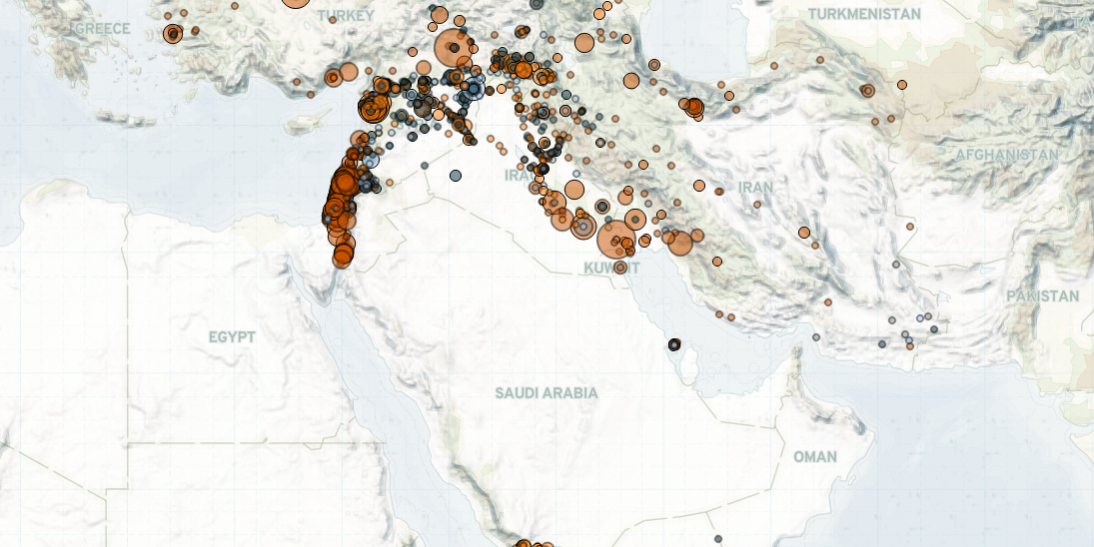 Last week in the Middle East, two members of Hurras Al Din were killed by a drone strike conducted by the global coalition forces in northern Syria, while three former opposition commanders were killed by unidentified gunmen in the south. In Iraq, the Kurdistan Democratic Party’s branch in Baghdad was set on fire by supporters of Popular Mobilization Forces (PMF). Meanwhile, the Houthis in Yemen swapped prisoners with pro-Hadi forces and the Saudi-led coalition. Elsewhere, clashes were reported between Iranian government forces and a Kurdish rebel group. Demonstrations were held in Palestine and Israel to demand the release of a prisoner on hunger strike over his administrative detention. Finally, fearing a lifting of economic subsidies, several sit-ins were staged across Lebanon.

In northwest Syria, a drone strike believed to have been launched by the Global Coalition, which includes the United States (US), targeted a Hurras Al Din SUV on the outskirts of Idleb city, killing two members and a child. Precision drone strikes are part of the US unchanging policy toward the presence of hardline groups in Syria. They are likely to continue regardless of the outcome of the November 2020 US presidential election. Along the frontlines in the greater Idleb area, small-scale clashes continued between regime and allied forces against opposition and Islamist factions with frequent exchanges of shelling barrages between both sides. No reports of change in territorial control took place. Nearly eight months after a Turkish-Russian ceasefire agreement was struck, both powers remain on opposing sides regarding the long-term status of the enclave. Should they fail to reach another understanding, another round of military operations by the regime is becoming increasingly likely. This risks a February redux scenario where direct confrontation breaks out between regime forces and Turkey. Elsewhere, regime and allied forces continued their clearance operations against the Islamic State (IS) in the Syrian desert, supported by Russian airstrikes. These operations began in mid-2020 and increased in August in response to a surge in IS asymmetric attacks in the desert (for more on this, see this recent ACLED piece).

In southern Syria, an attack by unidentified gunmen targeted the vehicle of a prominent former opposition commander on the Damascus-Dar’a highway, killing him along with two other former commanders on 14 October (North Press Agency, 15 October 2020). While the victims had accepted a reconciliation agreement with the regime in 2018, they refused to join the Russian-backed 5th Assault Corps. It is believed the three were on their way back from a meeting with security agencies in Damascus aimed at negotiating the recovery of the bodies of opposition fighters killed in Dar’a before the regime takeover. Russia had reportedly made guarantees to the former commanders about their safety during the meeting. On 15 October, protests broke out in Dar’a during the victims’ funeral. Residents and supporters of the victims shouted anti-regime slogans, blaming security agencies for the assassinations. These attacks are not uncommon in Dar’a. In fact, they have been ongoing almost on a daily basis since the regime takeover in mid-2018. This attack is notable, though, given that the late prominent commander and his companions have been de facto figures of resistance. They were supported by many locals opposed to Iranian influence in southern Syria, lending further credence to the possibility of regime involvement in the incident.

In Iraq, dozens of rioters and PMF supporters set fire to the Kurdistan Democratic Party’s fifth branch in Baghdad – Karadah and burned the Kurdish flag. This came after the leader of the Kurdistan Democratic Party had made statements against the PMF. There were no fatalities or injuries reported, just material damage to the building. Elsewhere on 17 October, an unidentified armed group executed eight civilians in the village of Al Farhaniya area of Salahaddin (BasNews, 17 October 2020). They were part of a group of 12 individuals, possibly including policemen and civilians, who had been abducted earlier in the day while four remain missing. An investigation has been launched; local sources speculate that either IS or the PMF’s Asaib Ahl Al Haq are behind the attack.

Meanwhile, Iran-backed militias, including Kataib Hezbollah, offered a truce to halt attacks against US forces, under the condition that all American military forces withdraw from Iraq within a clear timeframe and in line with a parliamentary resolution (Military, 12 October 2020). Separately, a nation-wide strike was announced by five healthcare workers’ unions demanding the dismissal of the Health Minister, a higher risk allowance, and improved protection in response to the coronavirus pandemic. This comes after COVID-19 deaths in the country surpassed 10,000 (Rudaw, 14 October 2020).

In Yemen, two successful prisoner exchanges were reported during a week of relative calm. Houthi and pro-Hadi forces exchanged 1,056 prisoners as part of a UN-sponsored agreement on 15 and 16 October (AP News, 16 October 2020). The implementation of the prisoner exchange represents a successful confidence-building measure between the Houthi and internationally-recognized Hadi governments. A second prisoner exchange between the Houthi government and the Saudi-led coalition resulted in the repatriation of over 200 Houthi loyalists from Oman and the release of two Americans and the body of a third from Houthi prisons (Wall Street Journal, 14 October 2020).

The frontlines of the conflict were relatively stable between Houthi and anti-Houthi forces throughout Yemen last week. Clashes continued along major frontlines, but no significant territory was exchanged. Additionally, there were no clashes or shelling events reported in Abyan governorate between pro-Hadi and pro-Southern Transitional Council (STC) forces. Since clashes broke out between pro-Hadi and pro-STC forces on 11 May, the lack of shelling or clashes over the past week is the longest period of inactivity on the frontlines between the forces. Additionally, Al Qaeda in the Arabian Peninsula (AQAP) claimed a series of attacks against Houthi forces in Al Bayda governorate. The organization was recently driven out of areas of northern Al Bayda by a Houthi offensive.

In Saudi Arabia, the Saudi-led coalition claimed to have intercepted and prevented a number of Houthi attempts to target southern cities. These include an explosive-laden drone targeting Najran city and the destruction of a ballistic missile in Houthi-controlled Yemen (Arab News, 14 October 2020).

Meanwhile, clashes between the Islamic Revolutionary Guards Corps (IRGC) and the Kurdish rebel group Kurdistan Free Life Party (PJAK) were reported in Iran’s western province of Kurdistan. At least two PJAK fighters were reportedly killed in Marivan county, and one female foreign militant was arrested (ISNA, 12 October 2020). The IRGC forces shelled the area for the next two days. Over a dozen armed clashes with PJAK and unidentified Kurdish armed groups have been reported in Iran’s western provinces in recent weeks. PJAK agreed to fully withdraw from Iran’s soil in 2011, following major Iran-Iraq cross-border raids by the IRGC. However, the armed group is believed to operate underground cells that roam Iran’s Kurdish areas, and its fighters sporadically clash with Iranian government forces (Rudaw, 5 May 2020).

Elsewhere, several demonstrations were held in Israel and Palestine, calling for the release of Maher Al Akhras, who has been on hunger strike for over 80 days in protest of his administrative detention in Israel. Al Akhras, a West Bank Palestinian subject to Israeli military law, was arrested in late July for his alleged ties with the Islamic Jihad armed group and is currently held in a hospital (Al Jazeera, 12 October 2020). According to Physicians for Human Rights Israel, Al Akhras’ health condition is rapidly deteriorating and he might be on the verge of death (PHR, 21 October 2020). Yet, Israel’s High Court of Justice has denied an emergency petition to immediately release him (Palestine Chronicle, 20 October 2020). Administrative detention is a pre-emptive measure that allows the indefinite detention of a person presumed to pose a future security threat, without trial and based on classified information (B’Tselem, 17 November 2017). The Israeli government has been frequently criticized for its excessive use of administrative detention, denying detainees due process. B’Tselem, a Jerusalem-based human rights organization, reports that by late August 2020, 355 Palestinians were held in administrative detention in Israel (B’Tselem, 12 October 2020). There are concerns that “Al Akhras’s death could ignite further tensions between Israel and Palestinian factions in both Gaza and the West Bank” (Time of Israel, 14 October 2020).

Finally, in Lebanon, there was a threefold increase in the number of demonstration events compared to the week prior. On 14 October, several sit-ins were held following a call by the General Confederation of Lebanese Workers “to participate in a day of anger” against the deterioration of economic conditions (Middle East Monitor, 15 October 2020). The demonstrations were triggered by recent comments from Central Bank officials, who had indicated a possible end to government subsidies on essential goods. The Central Bank of Lebanon has been providing foreign currency for imports of wheat, fuel, and medicine amid the plummeting Lebanese currency. Bank officials say trade cannot be indefinitely financed as foreign reserves decline (Reuters, 14 October 2020). The country’s caretaker Prime Minister Hassan Diab has warned that “any step to lift subsidies now on vital goods would be unacceptable and would cause a social explosion” (Reuters, 9 October 2020).

Aaron Wolfson is the US Research Manager at ACLED. He previously supported data collection for Yemen and Saudi Arabia. He holds MAs in Global Policy Studies from the LBJ School of Public Policy and Middle Eastern Studies from the Center for Middle Eastern Studies, both at the University of Texas at Austin. His research interests include the effects of conservative and religious-based actors, ethno-religious tensions, and climate change on state stability. His past research has included ethnoreligious conflict, Islamist organizations in democratizing systems, and identifying the relationship between climate change and conflict.