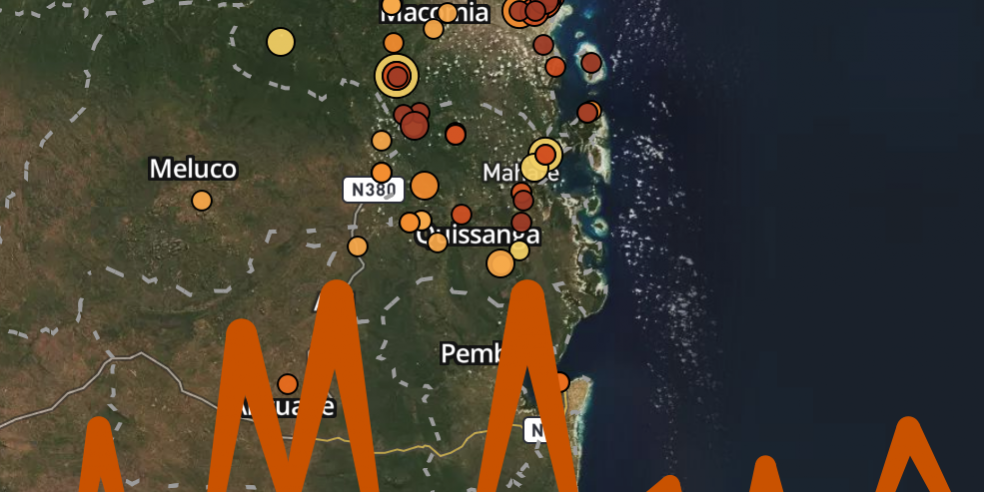 Last week began with a series of supply gathering operations by insurgents that took place across a wide geographic area. On 19 October, insurgents looted supplies from Iba, Meluco district, Olumbua, Macomia district, and Nanhoma, Quissanga district. No arson or casualties were reported in any of the three raids. The raids reflect a growing trend, especially in the southern half of the conflict zone, of insurgents hoarding food and other supplies as Cabo Delgado enters its lean season, when food stores dwindle and it becomes more difficult to gather resources.

Also on 19 October, insurgents entered Koko, Macomia district, kidnapping one civilian and burning several homes. The attackers returned the next day, but were met by government troops. The insurgents retreated after a firefight. No casualties were reported. A source in the area said that local residents are working to form a militia to defend against future attacks.

On 20 October, the same day as the second attack on Koko, insurgents also carried out two attacks just to the south in Meluco district. The attacks on Nangororo and Roma — both of which, like Koko, sit on the N380 — did not produce any casualties, though civilians fled toward Macomia town to avoid further violence.

Insurgents also arrived on Ilha Matemo, Ibo district on 20 October, traveling in two motor boats. While on the island, the attackers killed one man for having a non-Islamic haircut and kidnapped several others, mostly young people. An eyewitness reported that some of the insurgents spoke Kimwani with a Mocimboa da Praia accent and that they urged civilians to live according to Islamic law.

While the insurgents were onshore on Ilha Matemo, Dyck Advisory Group (DAG) helicopters arrived and destroyed the motor boats the insurgents had taken from the mainland to the island. This forced the insurgents to stay the night on Matemo, then attempt to leave early the next morning in local boats. Two of those boats were then also destroyed while at sea by DAG helicopters, killing an unknown number of insurgents and civilian hostages. The pro-government website Noticias de Defesa published photos of burning boats purporting to be those destroyed near Ilha Matemo and claimed that the operation had killed 34 insurgents and injured 69. The report acknowledged that civilian hostages were also killed, but did not specify how many.

On 21 October, insurgents struck across Mozambique’s northern border once again, attacking the Tanzanian border post of Kilambo, about 30 kilometers east of Kitaya, the site of an earlier attack on 14 October. Tanzanian forces repelled the Kilambo attack. No casualties have been reported.

The Tanzanian government also acknowledged the Kitaya attack last week. Tanzanian Inspector General of Police Simon Sirro told reporters that the attack took place and that 300 insurgents were involved. He declined to offer a casualty estimate or any other details.

A new account of insurgent recruitment also emerged last week, with Pinnacle News reporting that a young man in Chiure district was lured into the insurgency after being contacted and paid by mobile phone. He reportedly left his wife and child in Chiure and joined the insurgents in Quissanga district. Upon joining up with the insurgents, he was made to turn over his phone and cut his dreadlocks.

Anonymous military sources claimed that over the weekend of 16-18 October, a combined force of Mozambican government units and a Mueda-based local militia killed 270 insurgents in operations around Awasse, Mocimboa da Praia district. Since then, no evidence has been offered to back up the extraordinary claim, and it appears to be, if not a fabrication, then at least a substantial overstatement of what actually took place. Yet the claim itself is notable, as it is the first example of government sources extolling the virtues of joint offensive operations by security forces and local militias.

First, the evidence. No official government source has repeated the claim in the week since the alleged operation. No photographs of the units involved, the fighting, or its aftermath have been released, which is strange for such a purportedly successful operation. The pro-government website Notícias de Defesa claimed to have photos of military equipment gathered in the operation, but the linked photos are of insurgent supplies recovered in Cagembe, Quissanga district, not the Awasse area. Sources close to the government’s counterinsurgency effort told Cabo Ligado that they knew nothing of the alleged operation. Mozambican president Filipe Nyusi, who visited Cabo Delgado last week and lauded security force operations in Cagembe, Diaca, and Ilha Matemo, made no mention of Awasse in his speech. In a speech scolding insubordinate police, Francisco Quiasse Madiquida, the head of the police Rapid Intervention Unit (UIR), did mention the purported Awasse operation, but only to shame his audience by claiming that the old war veterans of Mueda were more willing to take up arms for the state than young police (more on both speeches in this week’s Government Response section). In sum, there is little reason to believe that the operation took place as military sources described.

However, the fact that military sources would talk up a joint offensive operation with a local militia is itself newsworthy. There is a political aspect to the story, in that the sources emphasize that the militia hails from President Nyusi’s home district and is made up of Frelimo war veterans, an important constituency for any Frelimo leader. Strategically, though, the story also serves as propaganda in favor of organizing more local militias. After a long period of government resistance to arming Cabo Delgado residents, a decision has clearly been taken to expand the number and remit of government-backed local militias. Reports of militia organizing have come in from as far north as Palma and as far south as Macomia districts. There have not been confirmed instances of soldiers and militias conducting offensive operations against insurgents together, but the Awasse story suggests that such operations may be planned in the future. The prospect of gaining momentum in the conflict will surely appeal to Cabo Delgado civilians who have lost a great deal of agency to the conflict, making further militia expansion more likely.

Numerous reports this week underline the increasingly dire situation for displaced civilians in Cabo Delgado. In addition to the attacks there, deaths due to diarrhea on Ilha Matemo surpassed 20 last week, according to a source. Further south, in Pemba, 127 boats carrying over 7,400 people arrived from conflict-affected areas between 16 and 23 October, according to the United Nations. They are refugees from Quissanga, Macomia, and Ibo districts, mostly women and children, and come largely in boats of 25-50 people. Many stay with relatives, and aid agencies have provided housing for some, but by 26 October, 200 refugees were still stranded on the beach in Pemba’s Paquetiquete neighborhood.

New research on displacement from the Center for Public Integrity (CIP) highlights the threats displaced people face from local authorities. In their fieldwork, CIP researchers found “many reports of the theft of aid intended for the displaced” perpetrated by authorities with the power to control access to aid, as well as “reports of sexual abuse or attempted abuse of displaced women in exchange for aid.” The researchers found no evidence that the reports had been investigated, and decried the environment of impunity around the alleged abuse.

The report also detailed the complex local politics of aid distribution in which local leaders play a key role in determining who receives aid. One aid worker complained in the report that “chiefs [of the host neighborhoods] put in the first places their relatives to receive the aid first. Only afterwards do they put the truly displaced people.” Attempts to whittle down the lists of aid recipients to those who are truly displaced have been fruitless so far.

Luiz Fernando Lisboa, the Catholic Bishop of Pemba who has been heavily involved in aid distribution in Pemba, estimated in an interview that the city is now home to over 80,000 displaced people. With new refugees arriving daily, he said “we foresee… a city completely flooded with people without the [necessary] sanitary and physical response.” For now, however, sanitation is holding steady and the only acute diarrhea cases in the city are refugees coming from Ilha Matemo, who are being treated in Pemba’s Eduardo Mondlane health center.

President Nyusi visited Cabo Delgado last week, touring conflict-affected areas and giving a speech to government troops. In his speech to security forces, he promised that new reinforcement was on its way to the front and praised the commitment of the deployed troops. A source reported that the promised reinforcement most likely refers to armored personnel carriers acquired from South Africa that recently arrived at Maputo.

Nyusi’s trip was preceded by a less positive visit from Francisco Quiasse Madiquida, the UIR chief. Madiquida harshly criticized certain UIR members in Pemba for refusing to patrol in the city, accusing them of being greedier than they are patriotic. Following Madiquida’s speech, the police who had refused to patrol were arrested and sent to prison in Mieze, Metuge district. The UIR mutiny is another instance in a pattern of dissatisfaction among UIR personnel deployed in Cabo Delgado. In late August, police chief Bernardino Rafael chastised the UIR’s 6th battalion for complaining on social media that they are not receiving the same hazard pay as military units deployed in the north.

On 20 October 2020, FDS forces, with the support of militias, clashed with insurgents in Koko (Mocimboa da Praia, Cabo Delgado). Houses were set on fire. No reports on injuries and/or fatalities. 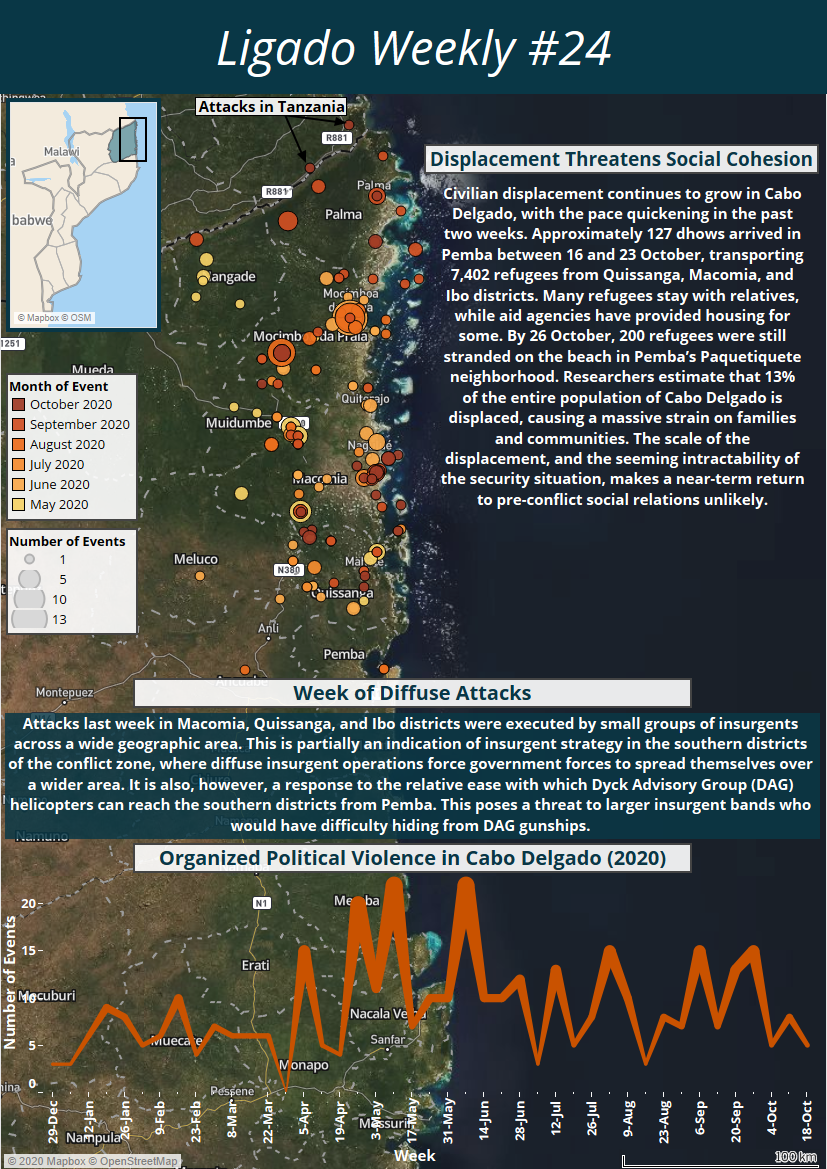 ACLED is the highest quality and most widely used real-time data and analysis source on political violence and demonstrations around the world. Practitioners, researchers, and governments depend on ACLED for the latest reliable information on current conflict and disorder patterns.
27 October 2020
Share
TweetShare on Twitter Share on FacebookShare on Facebook Share on LinkedInShare on LinkedIn