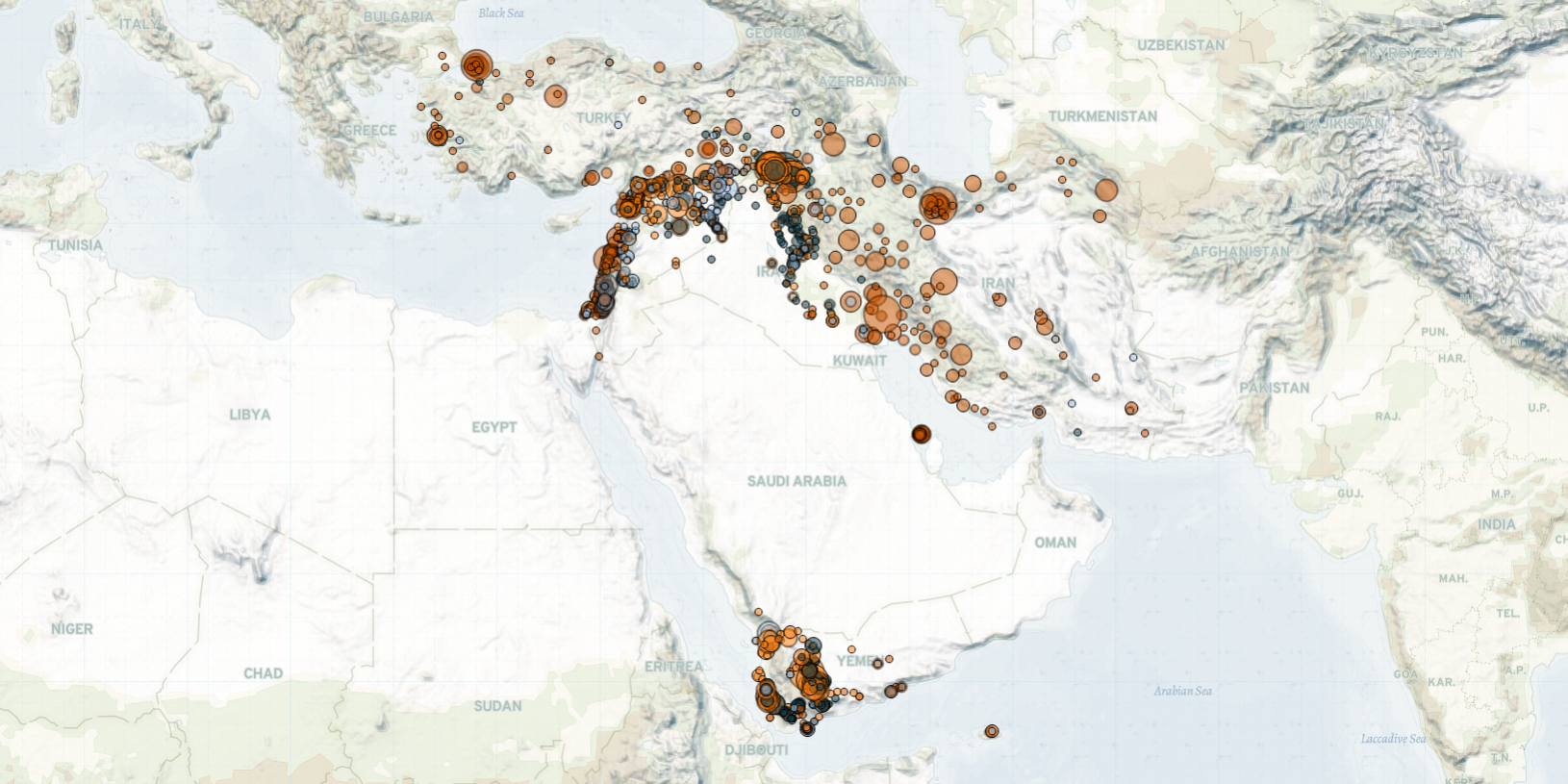 Last week in the Middle East, Houthi forces continued their offensive in Marib governorate in Yemen, as the UN Human Rights Council (UNHRC) rejected the renewal of the mandate of the Group of Eminent Experts on Yemen. In Saudi Arabia, multiple civilians were injured during Houthi drone and missile strikes. In Bahrain, the inauguration of the Israeli embassy prompted an increase in demonstrations. In Syria, People’s Protection Units (YPG) shelled Turkish force positions in the northern Aleppo countryside, killing a Turkish soldier. Elsewhere, Israeli warplanes carried out airstrikes on Tiyas airbase in Homs, held by regime forces and pro-Iran militias, leading to six fatalities. In Iraq, police engaged an unknown militant attempting to target a police station with a suicide vehicle-borne IED (SVBIED) in Ramadi city in Anbar province. Lastly, Iran conducted an extensive military drill near its border with Azerbaijan, amid increasing tension between the neighboring countries.

In Yemen, Houthi forces took control of a number of locations in Al Jubah district of Marib governorate last week, including the Al Khashinah camp. The pace of their progress has slowed down compared to the last two weeks, however, possibly as the result of sustained airstrikes by the Saudi-led coalition. Clashes also resumed west of Marib city last week, at the initiative of pro-Hadi forces, for the first time in weeks. Houthi forces also fired three ballistic missiles on Marib city, killing four civilians and injuring more than 30 others.

Meanwhile, the UNHCR rejected the renewal of the mandate of the Group of Eminent Experts on Yemen last week, despite UN High Commissioner for Human Rights Michelle Bachelet’s assertion that “Yemen remains the world’s worst humanitarian crisis” (OHCHR, 7 October 2021). Partly the result of intense Saudi lobbying, this is the first time in the history of the Council that a resolution has been rejected (Reuters, 7 October 2021). This vote effectively puts an end to international investigations into violations and abuses committed by all parties in Yemen, with likely long-lasting repercussions in any post-conflict reconstruction efforts.

In Saudi Arabia, Houthi drone and missile attacks increased last week compared to the week prior. Although Saudi forces successfully intercepted the majority of strikes, one successfully struck Jizan Airport, injuring 10 civilians and temporarily disrupting operations at the facility. In another incident, four civilians were also injured when fragments of an intercepted drone fell on Abha airport.

In Bahrain, demonstration events increased throughout the country last week following the inauguration of the Israeli embassy in Manama by Israeli Foreign Minister Yair Lapid on 30 September (Al Jazeera, 30 September 2021). Bahraini police forces suppressed a number of anti-Israel demonstrations and deployed in the city in anticipation of further demonstration activity, as demonstrators gathered in front of the Israeli embassy to denounce its opening. Such demonstration levels had not been recorded in a single week in Bahrain since May 2021, when Bahrainis took to the streets to condemn the latest round of violence in Israel and Palestine.

In northwest Syria, regime forces contined to clash with opposition and Islamist factions along existing fronts in the Idleb enclave last week, with no changes to the areas of control. In northern Aleppo, People’s Protection Units (YPG) shelled Turkish forces positions in Tweis, killing a Turkish soldier.

In Iraq, police engaged an unknown militant attempting to target a police station with a SVBIED in Ramadi city in Anbar province last week. The SVBIED detonated before reaching its target, killing only the driver. This was the only notable security incident reported last week in the run up to the Iraqi parliamentary election on 10 October; there were no reports of attacks on polling stations, for example.

Lastly, Iran conducted its most extensive military drill in recent years along the border with Azerbaijan and Armenia. Iranian officials claim that Israeli military forces, as well Islamic State militants, are present on the Iranian-Azerbaijani border, a claim that Azerbaijani officials refute (Jerusalem Post, 11 October 2021). Tensions have been on the rise in recent weeks between the two countries after Azerbaijan hosted a joint military exercise with Turkey and Pakistan (Middle East Eye, 9 October 2021). Azerbaijan has also imposed restrictions on Iranian trucks using a road that was seized by Azerbaijan following the 2020 conflict with Armenia (Middle East Eye, 9 October 2021). Last week Azerbaijan also closed the office of Iran’s Supreme Leader’s representative in Baku “temporarily”, citing coronavirus restrictions (Times of Israel, 5 October 2021). On the same day, Iran closed its airspace to Azerbaijani military planes (Iran International, 6 October 2021).Whether the recent provocations and an ongoing verbal war will build up to something more serious remains to be seen. But given Iran’s cautious behavior in recent decades in avoiding direct military confrontations with its opponents, a full-blown war between the two neighboring countries remains unlikely (MEI, 5 October 2021). See the Europe, Caucasus, and Central Asia Regional Overview for more around this development.