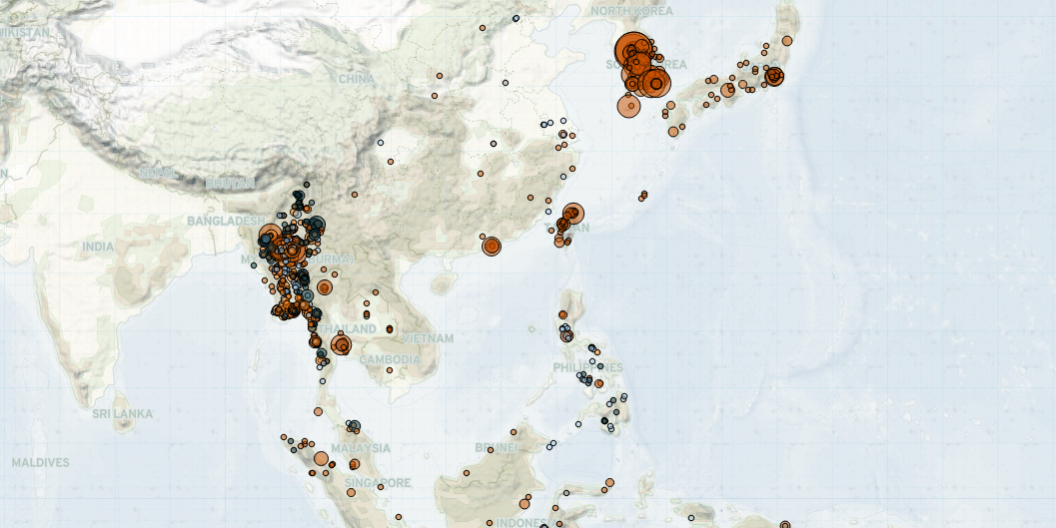 Last week in East and Southeast Asia, after several months of absence, pro-military rallies were staged across Myanmar to oppose the decision to exclude regime chief Min Aung Hlaing from the Association of Southeast Asian Nations (ASEAN) summit beginning on 26 October. Meanwhile, military artillery barrages destroyed more than 160 houses in Thantlang town, Chin state. In the Philippines, military forces killed the leader of the Islamic State (IS)-inspired Dawlah Islamiyah. In Indonesia, fighting between state forces and Papuan separatists increased last week. In Thailand, there was an uptick in anti-government demonstration events following the death of a protester who had been shot by police in August 2021. Lastly, in Taiwan, a legislator from the pro-independence Taiwan Statebuilding Party (TSP) lost a recall election and became the first member of the parliament ever to be recalled.

In Myanmar, more than two dozen pro-military rallies were reported across the country last week, including in the capital Nay Pyi Taw and other military-dominated cities and towns such as Meiktila, Myitkyina, and Pyin Oo Lwin. Nationalist Buddhist monks, members of the military-backed Union Solidarity and Development Party (USDP), and family members of military soldiers were among those in attendance at some of the rallies. The rallies began on 25 October to protest against ASEAN’s decision to bar regime chief Min Aung Hlaing from attending the ASEAN Summit, which commenced on 26 October (Myanmar Now, 29 October 2021). Media reports claim that some participants had been paid to attend the rallies or threatened with fines if they refused to participate (Myanmar Now, 29 October 2021). Prior to the rallies last week, ACLED last recorded a pro-military demonstration in March 2021.

Elsewhere, in Chin state, the Myanmar military launched heavy artillery strikes on Thantlang town on 29 October, after a military soldier was killed by the Chinland Defense Forces (CDF) earlier in the day. The artillery barrage destroyed more than 160 out of 2,000 houses in the town. Many of the town’s residents had previously fled following deadly military operations after an attack on a military base by the CDF on 18 September (Myanmar Now, 30 October 2021). Earlier this month, the military deployed thousands of reinforcements in northwestern Myanmar, including in Chin state and Magway and Sagaing regions, in a bid to quell the resistance (Irrawaddy, 8 October 2021).

Shan State-South saw a 356% increase in political violence last week compared to the prior month (see ACLED’s Early Warning Research Hub for more), driven by the ongoing fighting between local defense groups and state forces. Fighting has been concentrated in Pekon township which borders Kayah state, where significant battles between the military and local defense groups have been recorded since the military coup (for more, see ACLED’s recent report). Last week, the military detained 19 civilians in Pekon township and used them as human shields, forcing them to march in front of military columns (Irrawaddy, 29 October 2021). The military has used civilians as human shields in other parts of the country when fighting with local defense groups; they also have a long history of using human shields in battles with ethnic armed groups.

Last week, political violence in Ayeyarwady region saw a 200% increase compared to the prior month (see ACLED’s Early Warning Research Hub for more). In one notable event, in Pathein township, an explosion occurred at a National League for Democracy (NLD) party township office. NLD offices across the country have been targeted since the coup, with attacks often carried out at night during curfew hours, leading many to suspect the military is behind the attacks (Myanmar Now, 3 November 2021).

Last week in the Philippines, military forces killed Salahuddin Hassan, the commander of the Dawlah Islamiyah – Hassan Group, during a military operation in Talayan town, Maguindanao. The Dawlah Islamiyah leader’s wife, who was reportedly the finance officer of the Dawlah Islamiyah – Hassan Group, was also killed. Hassan has been described by army sources as the “overall emir” of the IS-inspired Dawlah Islamiyah and was previously linked to other militant groups such as Al-Khobar (Manila Bulletin, 29 October 2021). He has reportedly been involved in numerous violent attacks in the southern Philippines over the past decade (Rappler, 29 October 2021). During this time, several of the various militant Islamist groups which operate in the southern Philippines have pledged allegiance to IS. Many of these IS-inspired groups have been fighting under the name Dawlah Islamiyah (International Crisis Group, 27 June 2019).

Also in the Philippines, there was a 267% increase in political violence in the Bicol Region last week compared to the prior month (see ACLED’s Early Warning Research Hub for more). Notably, five farmers accused of being New People’s Army (NPA) militants were killed during a police operation in Mandaon, Masbate, Bicol Region. The NPA, the armed wing of the Communist Party of the Philippines (CPP), has been carrying out a decades-long communist armed struggle against the government. Police claim that they were attempting to serve an alleged rebel a warrant of arrest when he and his companions engaged the police in a shootout. However, the CPP denies that the fatalities were NPA militants, asserting that they were mere farmers (Philippine Daily Inquirer, 25 October 2021).

In Indonesia, clashes between the separatist West Papua National Liberation Army (TPNPB) and state forces increased last week compared to the week prior. Multiple armed clashes occurred in Sugapa district, Intan Jaya Regency, Papua province — resulting in a 291% increase in political violence in Papua last week relative to the past month (see ACLED’s Early Warning Research Hub for more). On 26 October, fighting between the TPNPB and military forces led to two Papuan children being accidentally shot. One of the children died after failing to receive medical treatment due to a lack of medical staff in the area (Suara Papua, 27 October 2021). Following the events, 1,955 Papuans fled their homes in Kumlagupa and Bilogai village, Sugapa district, and sought shelter at a church in Bilogai (Suara Papua, 28 October 2021).

In Thailand, pro-democracy demonstrators clashed with police in Din Daeng last week following the death of a demonstrator who had been shot by police in August. The 15-year-old boy had been in a coma for two months following his shooting during an anti-government demonstration in Din Daeng (Prachatai English, 19 Oct 2021). Following the shooting, Thai police denied using live rounds against the protesters, despite hospital workers locating a bullet in the victim’s head (Bangkok Post, 17 August 2021).

Lastly, in Taiwan, a pro-independence TSP legislator lost a recall election in Taichung City’s second district, marking the first time a legislator has ever been removed using the recall vote system (Focus Taiwan, 23 October 2021). The removal of the sole TSP legislator will likely have a negative impact on the future of the party, known for its emphasis on Taiwanese identity and a strong stance against China’s influence (New Bloom Magazine, 23 October 2021). The recall vote comes ahead of a nationwide referendum scheduled for 18 December, which is supported by the ruling Democratic Progressive Party (DPP) and its close ally, the TSP (Taipei Times, 25 October 2021). On that occasion, voters will decide on proposals to: hold future referendums on the same date as general elections; relocate a natural gas terminal to protect algal reefs; allow pork imports containing ractopamine; and activate a nuclear power plant (Taipei Times, 25 October 2021). Meanwhile, the main opposition party, the Kuomintang (KMT), which favors closer ties to Beijing, seeks to use momentum from the successful recall to defeat the DPP’s initiatives on the ballot (Taipei Times, 25 October 2021). These developments add fuel to debates on divisive issues in Taiwan, and are likely impact protest trends.