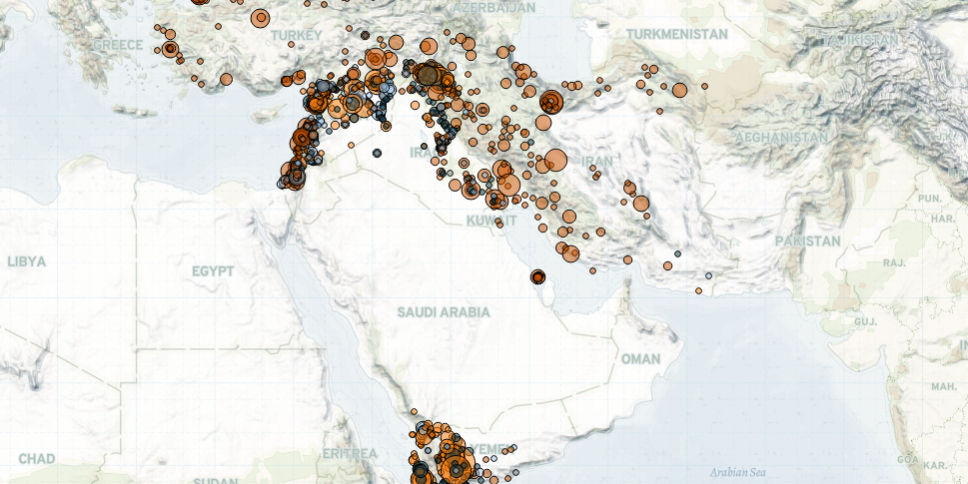 Last week in the Middle East, fighting between Houthi and pro-Hadi forces picked up in Taizz governorate, while Houthi forces continued their advances in the south of Marib governorate. In Syria, Israeli warplanes targeted regime and pro-regime militia positions in Quneitra, while Islamist groups clashed in Idlib and Lattakia governorates. In Iraq, the Islamic State (IS) killed a number of Shiite civilians in Diyala governorate, while, state forces killed Kurdistan Workers’ Party (PKK) fighters in Turkey, and guards assaulted prisoners in Sirnak. Lastly, in Palestine, Israeli construction works adjacent to an Islamic cemetery in East Jerusalem led to clashes amid Israel’s approval for the construction of new settlement units in the West Bank.

In Yemen, Houthi forces continued their advance in the south of Marib governorate last week. They took over the administrative center of Al Jubah district and further areas on the main road leading to Marib city. Houthi forces also seized control of Jabal Murad district — the heartland of the powerful Murad tribe — following the peaceful withdrawal of pro-Hadi forces and tribal fighters. The ongoing Houthi advance on Marib comes amid reports of secret talks between the Houthis and tribal leaders for a peaceful surrender of Marib city (Middle East Eye, 29 October 2021). Despite Houthi gains, the Saudi-led coalition claimed to have killed hundreds of Houthi fighters during airstrikes in the governorate (France24, 28 October 2021). Meanwhile, Houthi forces shelled the house of a tribal sheikh with a ballistic missile in Al Jubah district, killing 13 civilians.

Elsewhere in Yemen, political violence increased significantly in Taizz governorate last week — by 323% last week relative to the past month — as pro-Hadi forces launched attacks on Houthi forces in the west of Taizz city. Clashes were concentrated in At Taiziyah and Jabal Habashy districts, with no report of territorial changes. In Shabwah governorate, clashes erupted between pro-Hadi forces and forces loyal to the secessionist STC near Al Alam military camp. The clashes erupted after Emirati forces, who had supported pro-STC forces across southern Yemen, evacuated the camp for reasons left unclear (South24, 24 October 2021). Increased tensions within an already divided anti-Houthi front risk facilitating the penetration of Shabwah governorate by Houthi forces, after their first gains in the governorate since 2017 were registered in late September. Violence in Shabwah governorate increased by 267% last week relative to the past month. (For more on these spikes in violence, see ACLED’s Early Warning Research Hub.)

In northwest Syria, HTS clashed with Ajnad al Sham and Jund Allah Islamist militias in Jisr-Ash-Shugur in Idleb and Jabal al-Turkman in northern Lattakia last week, resulting in 11 fatalities and the capture of at least 20 fighters across all parties. The result was a 222% increase in political violence in Lattakia last week relative to the past month (see ACLED’s Early Warning Research Hub for more).

In Iraq, IS attacks against civilians and Iraqi forces continued last week. IS militants attacked the Shiite village of Qaryat Al Rashad in Diyala, killing 14 civilians, most of whom were members of the Banu Tamim Tribe. In retaliation, Banu Tamim tribal militants attacked the nearby Sunni village of Nahr Al Imam. During the attack on Nahr Al Imam, militants executed five civilians and destroyed private and public property. Two women were later found dead in a burned house. The result was a 291% increase in political violence in Diyala last week relative to the past month (see ACLED’s Early Warning Research Hub for more).

Last week in Turkey, state forces killed multiple PKK militants during operations. The police special operations unit killed two PKK militants in Artuklu district, Mardin, while gendarmerie forces killed two PKK militants during an air-supported operation in Cukurca district of Hakkari. Additionally, gendarmerie forces carried out an air-supported operation in the Herekol mountain area of Pervari district, Siirt, with reports suggesting that multiple PKK militants were either killed or wounded. Meanwhile, prison guards assaulted a group of prisoners at the Sirnak T Type prison for allegedly refusing to recite the national anthem. A number of prisoners were hospitalized due to their injuries. The prisoners have since publicly called for an investigation into the attack and for prison access for human rights groups (ANF, 26 October 2021).

Lastly, in Palestine, Israeli construction works adjacent to the Al Yussufiyah cemetery in East Jerusalem — near the Lion’s Gate of the Al Aqsa compound — led to multiple clashes between Israeli military forces and Palestinians last week. Local Palestinians have raised concerns that the construction works — for an Israeli theme park — will disturb the graves of family members, after human remains were uncovered earlier this month (Reuters, 26 October 2021). The Jerusalem mayor stated that no legal burial grounds would be harmed in the construction works, and that the unearthed remains were from illegal burials (Mondo Weiss 29 October 2021). Palestinians sources, however, claim that the bones were discovered in a section where Jordanian soldiers who were killed during the 1967 war were buried (Middle East Eye, 11 October 2021). Palestinians have long fought against plans for the construction of Israeli gardens and parks in Jerusalem, over concerns that they would threaten several cemeteries (Mondo Weiss 29 October 2021). Meanwhile, the Israeli government provided approval for more than 3,000 new settlement units in the West Bank (BBC News, 27 October 2021). Palestinian President Mahmoud Abbas has condemned the decision, and called on the international community to take a “decisive stance” against the decision (Al Jazeera, 28 October 2021).