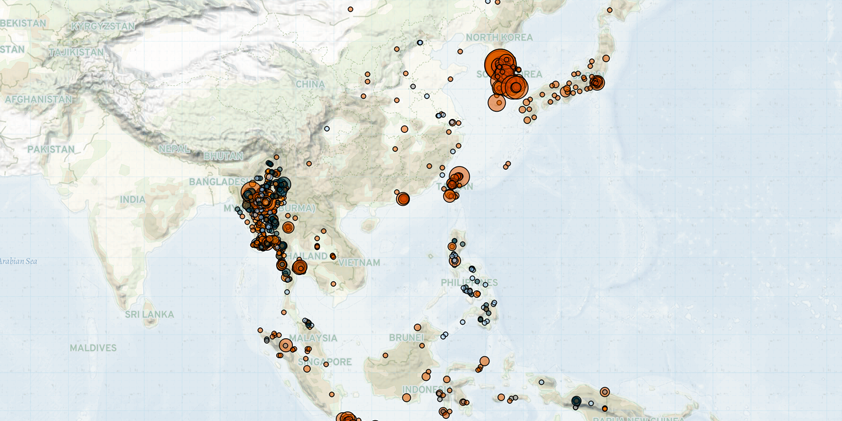 In Myanmar, unidentified gunmen shot and killed the chief financial officer of the military-owned telecommunications company MyTel near his home in Yangon city on 4 November. This marks one of the most high-profile assassinations of military-linked figures since the military coup in February. No party has claimed responsibility for the attack (Myanmar Now, 4 November 2021). The attack comes amid continued bomb attacks on MyTel telecommunication towers across the country. Since the National Unity Government (NUG) declared the “people’s defensive war” on the regime on 7 September, ACLED records over 100 bomb attacks on MyTel telecommunication masts (The Diplomat, 7 September 2021).

Meanwhile, in what appeared to be a new form of crackdown, the military regime confiscated several houses of NLD members, ousted parliamentarians, and NUG ministers last week. Family members living in these houses were forcibly evicted as state forces hung notices stating that the houses had been taken as state properties (DVB, 30 October 2021; Myanmar Now, 2 November 2021).

Elsewhere, in Pekon township, southern Shan state, the Myanmar military clashed with the joint forces of the KNPP/KA and the KNDF over several days last week. Thousands of villagers fled after the military fired heavy artillery and torched houses and other properties (Myanmar Now, 6 November 2021). Resistance fighters claim that they received intel that the military is planning a major operation to quell the resistance in this strategically-located area, which provides access to the capital (Myanmar Now, 6 November 2021).

In the Philippines, military forces killed NPA commander Jorge Madlos, also known as Ka Oris, in an operation in Bukidnon, Northern Mindanao. Madlos was a prominent figure in the NPA and the National Democratic Front (NDF) in Mindanao, and the military’s most wanted NPA commander (ABS CBN, 30 October 2021). The Communist Party of the Philippines (CPP), together with its armed wing, the NPA, and its political wing, the NDF, has been carrying out a decades-long political and armed struggle against the government. The military claims that Madlos died in a firefight that followed military airstrikes in the region. The CPP, however, claims that state forces ambushed Madlos while he and a companion were on the way to seek medical treatment (ABS CBN, 1 November 2021). The CPP also claims that the military airstrikes were staged to create the impression of an armed clash (ABS CBN, 1 November 2021). Given the disputed details, the CPP called for an autopsy of Madlos’ remains. However, the military immediately cremated Madlos’ remains, saying that he tested positive for COVID-19 (Manila Bulletin, 3 November 2021).

In Indonesia, armed clashes between the separatist West Papua National Liberation Army (TPNPB) and state forces continue to be reported in Bilogai village, Intan Jaya regency, Papua province. ACLED has recorded an increase in violence in Intan Jaya regency over the past month. Since 26 October, there have been four armed clashes between state forces and the TPNPB in Bilogai village alone.

Meanwhile, thousands of Papuan IDPs staged a protest in Bilogai village, Intan Jaya regency, Papua province last week, against the ongoing violence and calling for the revocation of mining permits at Wabu Block site (Suara Papua, 3 November 2021). The protest was held during a visit of Indonesian government officials to the IDP camp (Suara Papua, 3 November 2021). The Wabu Block site is located 50 kilometers from the controversial Grasberg mine site, which has been a hotspot of violence involving state forces, the local population, and the TPNPB. Wabu Block reportedly has more than 100 million tons of gold ore deposits (The Jakarta Post, 26 October 2020). Local Papuans claim that the exploitation of the site could potentially trigger an escalation in violence in the area, in addition to the negative impact that the mining operation will have on the environment and local people’s lives (Suara Papua, 1 November 2020). The TPNPB has also previously expressed their opposition to the Wabu Block site exploitation (West Papua Daily, 4 February 2021).

In Thailand, pro-democracy demonstrators held events on 31 October at several sites across the country to commemorate a taxi driver who protested against the military coup in 2006 by deliberately driving his car into a tank and later committing suicide (Prachatai, 3 November 2021). On the same day, various anti-government groups led by the People’s Party gathered in Bangkok, demanding the resignation of Prime Minister Prayut Chan-o-cha. They also collected signatures in a petition campaign to propose to parliament the amendment or removal of lèse majesté law (Thairath, 1 November 2021).

Meanwhile, political violence involving Malay Muslim separatists in Narathiwat province saw a 200% increase last week compared to the prior month (see ACLED’s Early Warning Research Hub for more). Several members of the state forces and a civilian were injured in separate attacks conducted by the separatists, though no fatalities were reported.

Lastly, in Japan, a series of protests were held across the country on 3 November to oppose the proposed revision of Japan’s constitution. The day marks the anniversary of the promulgation of the current pacifist constitution in 1946. Over a thousand people rallied in Kyoto against the amendment of Article 9 of the constitution, which renounces war and the use of force (Shimbun Akahata, 4 November 2021). The government has proposed amending the article in order to define the role of the Self Defense Forces (SDF), which is the de facto military of Japan. Many, however, fear that this would lead to legally allowing Japan to engage in armed conflicts (for more on this, see this ACLED infographic). Newly-elected Prime Minister Fumio Kishida expressed his intention to amend the constitution during his term (Mainichi Shimbun, 2 November 2021).