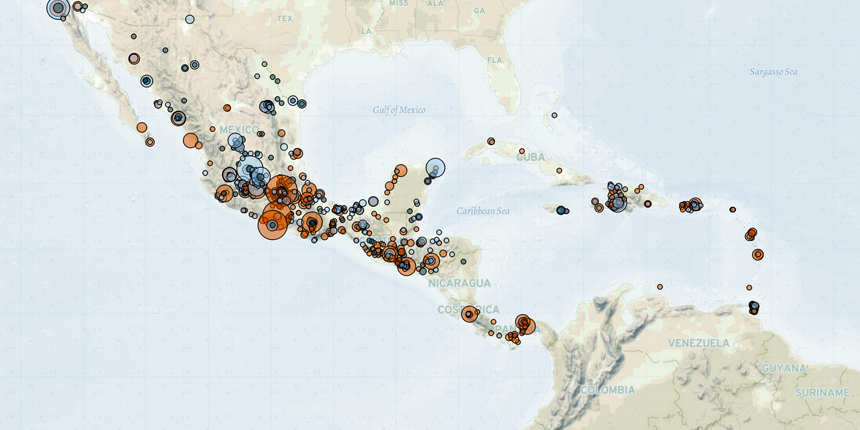 Last week in Mexico, Central America, and the Caribbean, violence against civilians increased. In Mexico, gang violence increased following attacks by criminal organizations in Michoacan, Quintana Roo, and Colima states. Meanwhile, National Guard operations to dissolve migrant caravans turned deadly in the southern state of Chiapas. In Haiti, disputes between gangs intensified amid clashes between the Ti Bwa gang and the Grand Ravine in Port-au-Prince throughout the week. Similarly, in Honduras, violence against civilians increased amid disputes between criminal groups. In Cuba, the crackdown against critics of the government increased ahead of anti-government demonstrations scheduled for 15 November. In Nicaragua, police continued to arrest members of the political opposition ahead of the general election on 7 November.

In Mexico, violence escalated in the Tierra Caliente region of the state of Michoacan last week, following a deadly attack by criminal groups that left 11 people dead. The victims’ bodies were found on 1 November on a road in Tarecuato, Tangamandapio municipality. The Michoacan state governor claims that the victims were locals who had been attacked for entering an area disputed by criminal groups (El Financiero, 3 November 2021). The attack sparked demonstrations by local Indigenous communities in Morelia and Tarecuato, demanding justice for the victims and an end to the ongoing violence by criminal groups in the area. In Tarecuato, demonstrations turned destructive as rioters blocked roads with burning vehicles. The Tierra Caliente region has been the focus of ongoing conflict between the Jalisco New Generation Cartel (CJNG) and the United Cartels (CU), an umbrella organization that gathers local criminal groups (Infobae, 4 November 2021). The CJNG has sought to expand its control over extortion activity and the production and trafficking of synthetic drugs in Michoacan state (EFE, 5 May 2021). The most recent violence comes after state forces claimed to have recovered areas of Michoacan state in October and pushed the CJNG back to municipalities at the border with Jalisco state (Excelsior, 10 October 2021).

Meanwhile, gang violence spiked in Quintana Roo last week, with twice the number of violent events compared to the week prior. According to local and federal authorities, the Sinaloa Cartel, the CJNG, and Los Zetas are disputing control of extortion activity and the local drug markets through attacks and clashes perpetrated by affiliated local gangs (Debate, 8 November 2021). Since June 2021, ACLED records an increasing trend of violence in this state, with October being the most violent month thus far in 2021.

Similarly, in Colima, attacks perpetrated by gangs increased last week amid disputes over the control of drug distribution in the state, contributing to a 200% increase in violence in the state last week relative to the month prior (see ACLED’s Early Warning Research Hub for more). The municipalities on the Mexican Pacific coast, Manzanillo and Tecoman, concentrated most of these violent events. Particularly in Manzanillo, the CJNG has been controlling the Port of Manzanillo for the trafficking of drugs from Colombia and for supplies for the production of synthetic drugs imported from Asia (InSightCrime, 8 October 2021). Authorities have reported that for the third trimester of 2021, Colima is among the list of the five Mexican states with the highest homicide rates (Colima Noticias, 26 October 2021).

Elsewhere, National Guard operations to prevent the passage of migrant caravans heading north turned violent in Chiapas last week, resulting in a 600% spike in violence in the state last week relative to the month prior (see ACLED’s Early Warning Research Hub for more). National Guard officers shot at a vehicle transporting migrants in Pijijiapan municipality, leaving one Cuban migrant dead and several others injured. Authorities claim that officers opened fire after the vehicle refused to stop at a checkpoint (Expansion Politica, 1 November 2021). Days after the attack, clashes between migrants and the National Guard were also reported in Pijijiapan municipality when National Guard officers attempted to arrest undocumented migrants and to prevent them from continuing their way to Mexico’s northern border. The clash left at least one migrant and three officers injured. Human rights organizations have criticized the government’s decision to involve military forces and the National Guard to control the flow of migration (EFE, 2 November 2021). According to local organizations, Mexican authorities have received around 108,000 requests for asylum between January and October 2021, double the number received in the same period in 2020 (France 24, 7 November 2021).

In Haiti, the turf war between rival gangs for the control of Martissant district in Port-au-Prince intensified last week, resulting in a spike in violence in the country (see ACLED’s Early Warning Research Hub for more). Members of the Gran Ravine gang and the G-9-affiliated Ti Bwa gang clashed throughout the week, leaving several people dead, including a civilian. Disputes between these gangs have been ongoing since June 2021, as the Grand Ravine gang seeks to regain control of Martissant district after leaving the G-9 gang alliance (InsightCrime, 31 August 2021). The escalation in violence comes despite an August truce between gangs that operate in Martissant and the southern neighborhoods of Port-au-Prince to allow the flow of humanitarian aid and other goods to the departments affected by the earthquake of 14 August (Haiti Standards, 19 August 2021). Following the clashes, residents of the neighboring district of Carrefour reported extortion activity involving the Ti Bwa gang, as well as the distribution of machetes in reported anticipation of further clashes with the Grand Ravine gang (Alterpress, 4 November 2021).

In Honduras, violence against civilians spiked last week (see ACLED’s Early Warning Research Hub for more). Authoritorities attribute most of this upsurge of violence to disputes between gangs for the control of extortions and drug markets (El Diario.es, 4 August 2021). Though in 2020 Honduras saw a reduction of homicide rates, during January and September 2021 homicides rates have increased by 6.5% compared to the same period of 2020 (EFE, 6 October 2021).

In Cuba, government supporters continue to target activists promoting calls for the anti-government ‘Civic March for Change’ scheduled for 15 November (ABC, 12 October 2021). Last week, a group of people gathered outside the house of the leader of the anti-government Archipelago movement in La Habana and protested against the planned march (Diario de Cuba, 2 November 2021). Days later, three government supporters beat a journalist and threatened him with more attacks if he covered the planned march. Meanwhile, police officers arrested the general coordinator of the opposition United Anti-Totalitarian Front (FANTU) in Santa Clara province for unknown reasons. The coordinator, who was released hours later, claims that the detention was related to his support for the ‘Civic March for Change’ (EFE, 3 November 2021). Members of several local organizations have recently reported acts of intimidation and threats by the government to deter people from participating in the march, including arbitrary detentions, threats against relatives of social leaders, and internet service cuts (El Pais, 4 November 2021). The government has refused to grant permits for the planned demonstration, arguing that it is sponsored by the US and aims to disrupt the public order (Europress, 12 October 2021).

In Nicaragua, the police crackdown against critics of the regime continued in the days leading up to the general elections on 7 November. Police officers raided the offices of the International Foundation for the Global Economic Challenge (FIDEG) on 4 November for unknown reasons (El Confidencial, 5 November 2021). The director of FIDEG, a think tank that has carried out studies on the socioeconomic conditions of the country,  has run as a presidential candidate in previous elections against President Daniel Ortega (Articulo 66, 4 November 2021). The following day, law enforcement officers arrested an activist that had published messages on social media denouncing a lack of fair conditions for the presidential election. Authorities have already arrested seven presidential candidates and more than 30 members of the political opposition in the lead up to the elections (BBC, 8 November 2021).